I'm working on this pair of shops for somewhere in Andreivia. 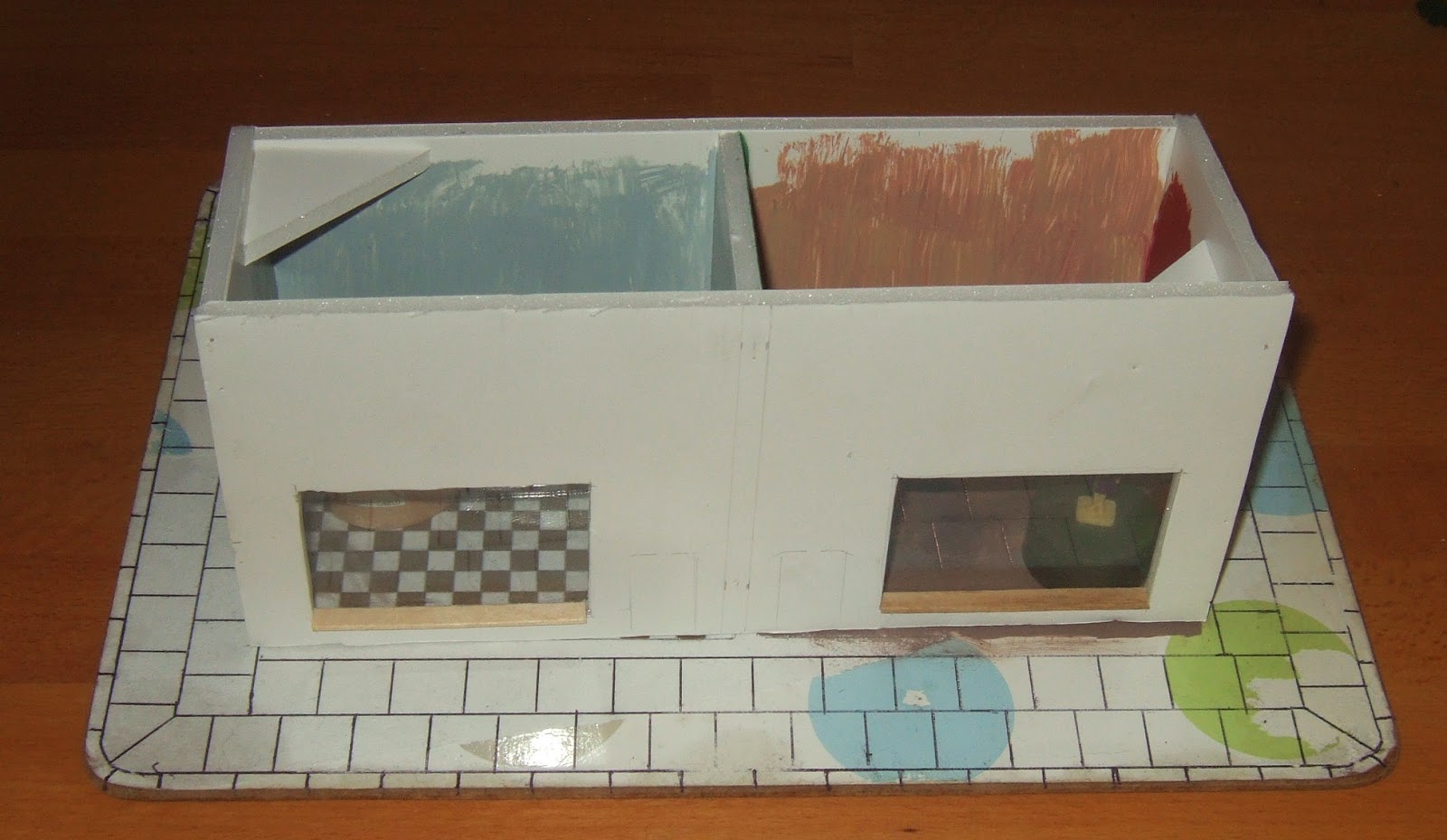 The base is a recycled cork place-mat with the paving stones inscribed with a ball-point pen.  The building itself is foam-core. 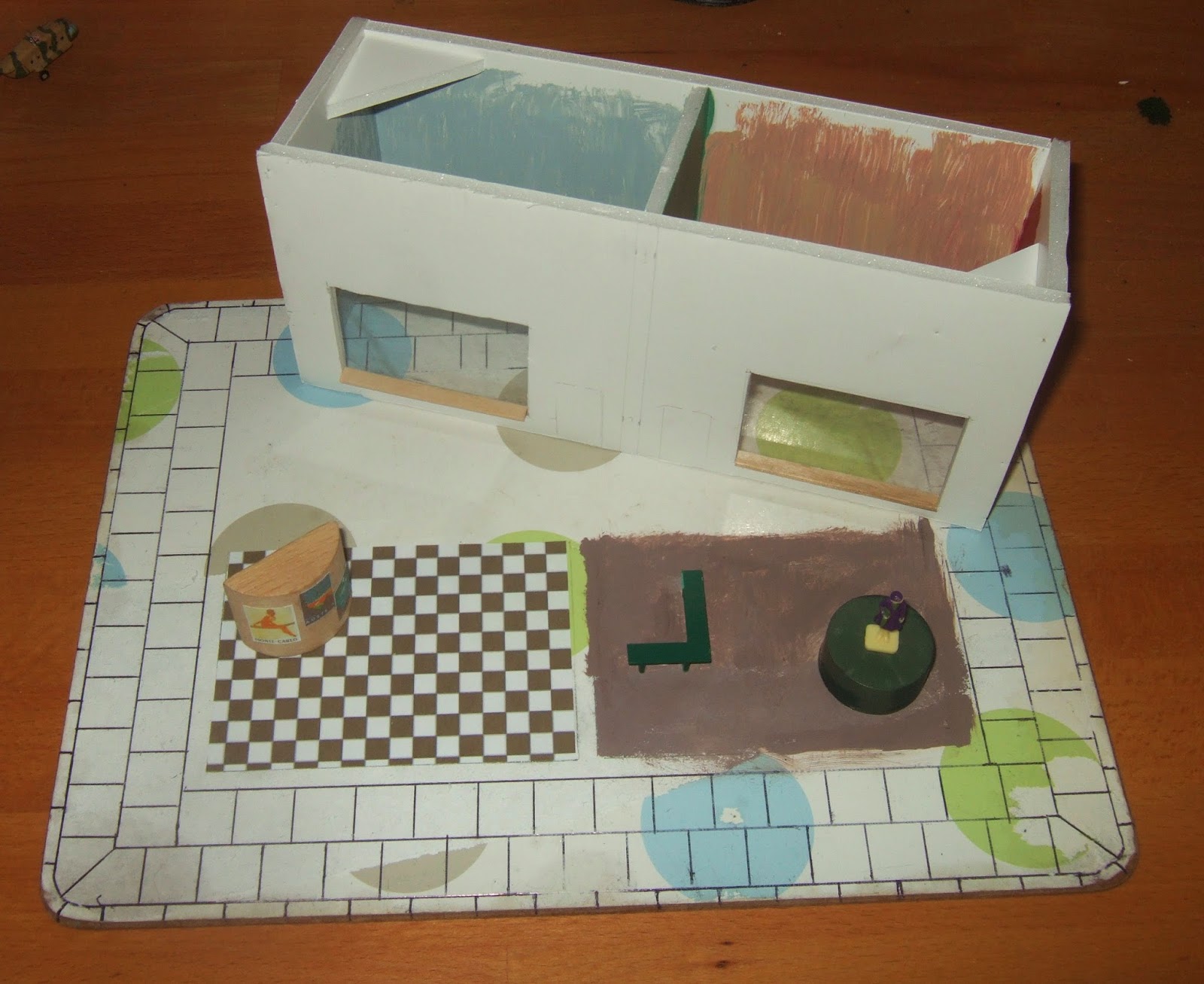 The interior detail is necessary because of the large plate glass (clear plastic card) windows.  The travel agency on the left has a web-downloaded, inkjet printed black and white check pattern glued to the floor.  Various bits and bobs including a Dapol model railway person as a mannequin make this a, somewhat old-fashioned, ladies' outfitter. 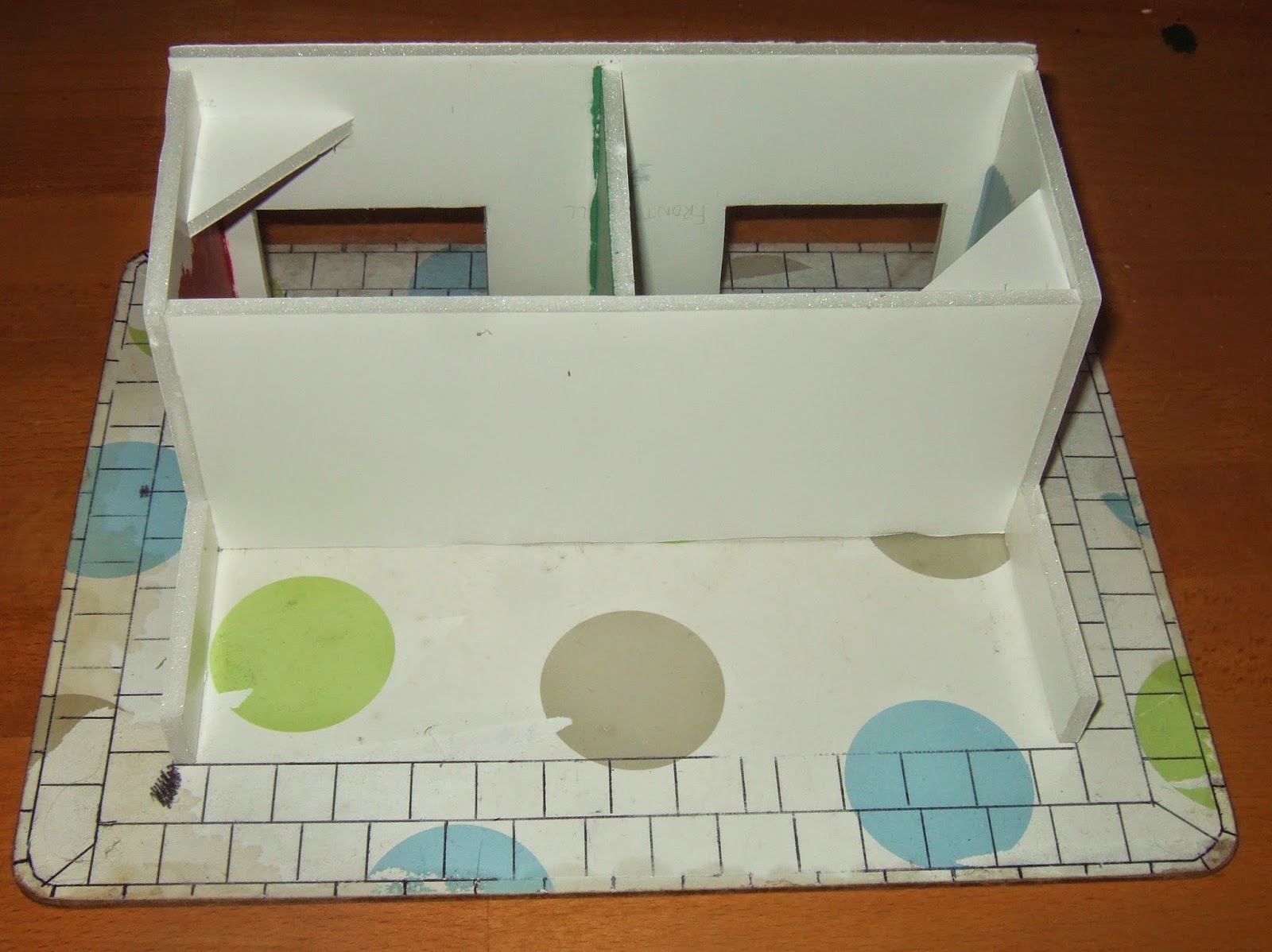 I shall probably add some outbuildings to the rear yards. 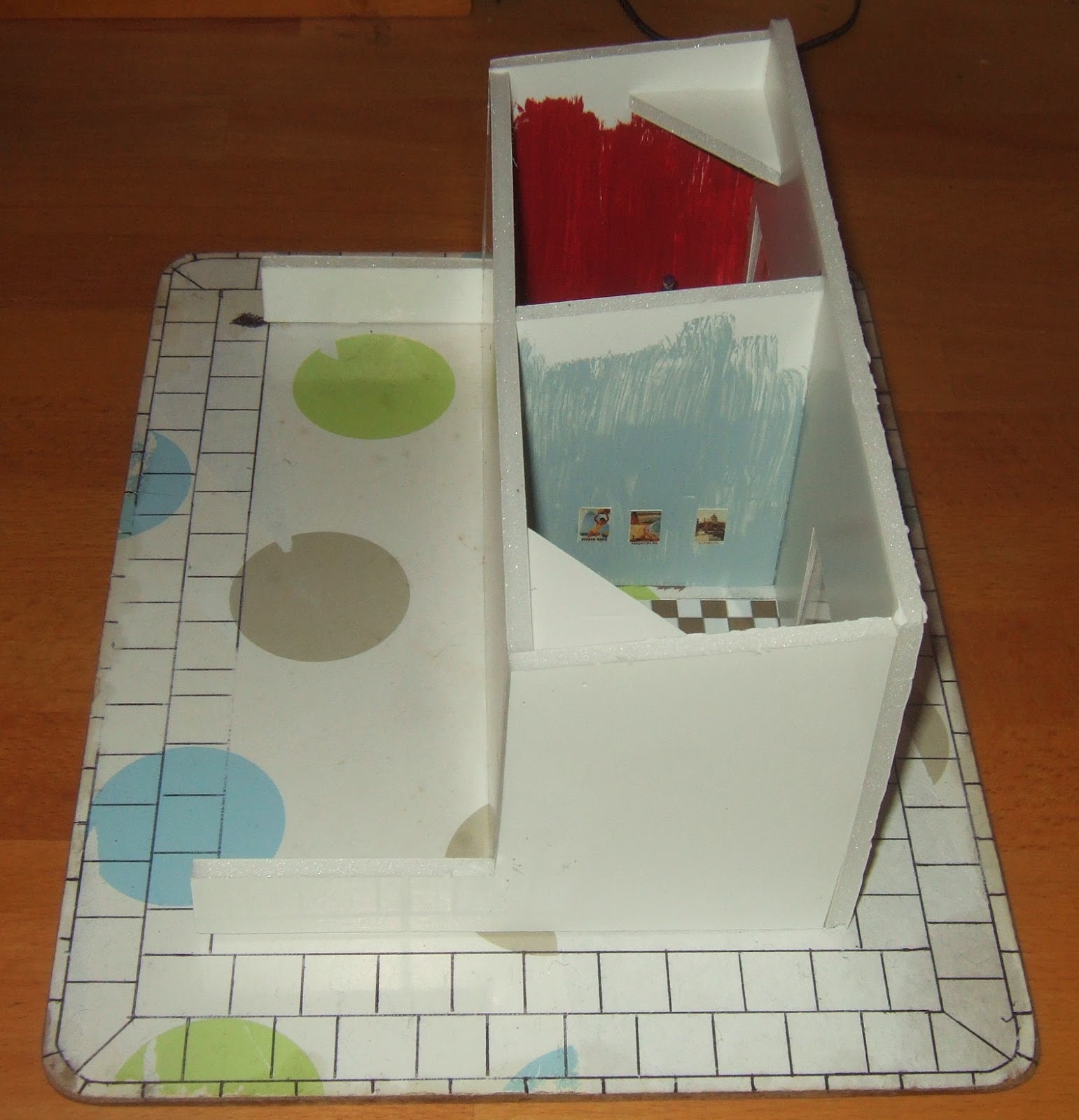 Posted by Counterpane at 12:56 AM No comments:

A Couple of Evenings' Work

I fancied a change of pace so I decided to speed-paint some more Napoleonics that I had in store, based and undercoated.

Jamie and I have been discussing putting on a game of Sharp Practice this June.  Jamie's doing the scenario but the plan is to set the game a couple of days before Waterloo and to play it on the 200th anniversary of the events (Waterloo Day itself falling in the middle of the week this year).

Sharp Practice needs relatively large forces for a skirmish game and up to now I've often made do with units that consisted of uncomfortable mixtures of types painted at various times over many years.  I need some more, uniformly painted French fusiliers.

These guys are not quite complete after two evenings.

The eight Frenchies on the left will mean that I have 32 in all (plus some grenadiers and voltigeurs), which is starting to get there.

The twelve assorted chaps on the right are from the HaT Spanish Guerrillas set.  Not much use for Waterloo but they happened to be based and undercoated and Napoleonic civilians of any kind are hard to come by in 20mm scale.

The HaT figures are from two different sculptors with differing styles, rather like those old Airfix Afrika Korps boxes that had the Mark 1 infantry but then a much more modern-looking commander figure.

I must dig out my copy of the Sharp Practice rules and remind myself how they work before June!
Posted by Counterpane at 1:12 AM No comments:

This is the first of the Midlam Miniatures goat-headed beast-man I bought at Claymore last summer. They are clearly suitable for Gloranthan Broo albeit of the more civilised kind.  I suspect this one may be in Lunar service. 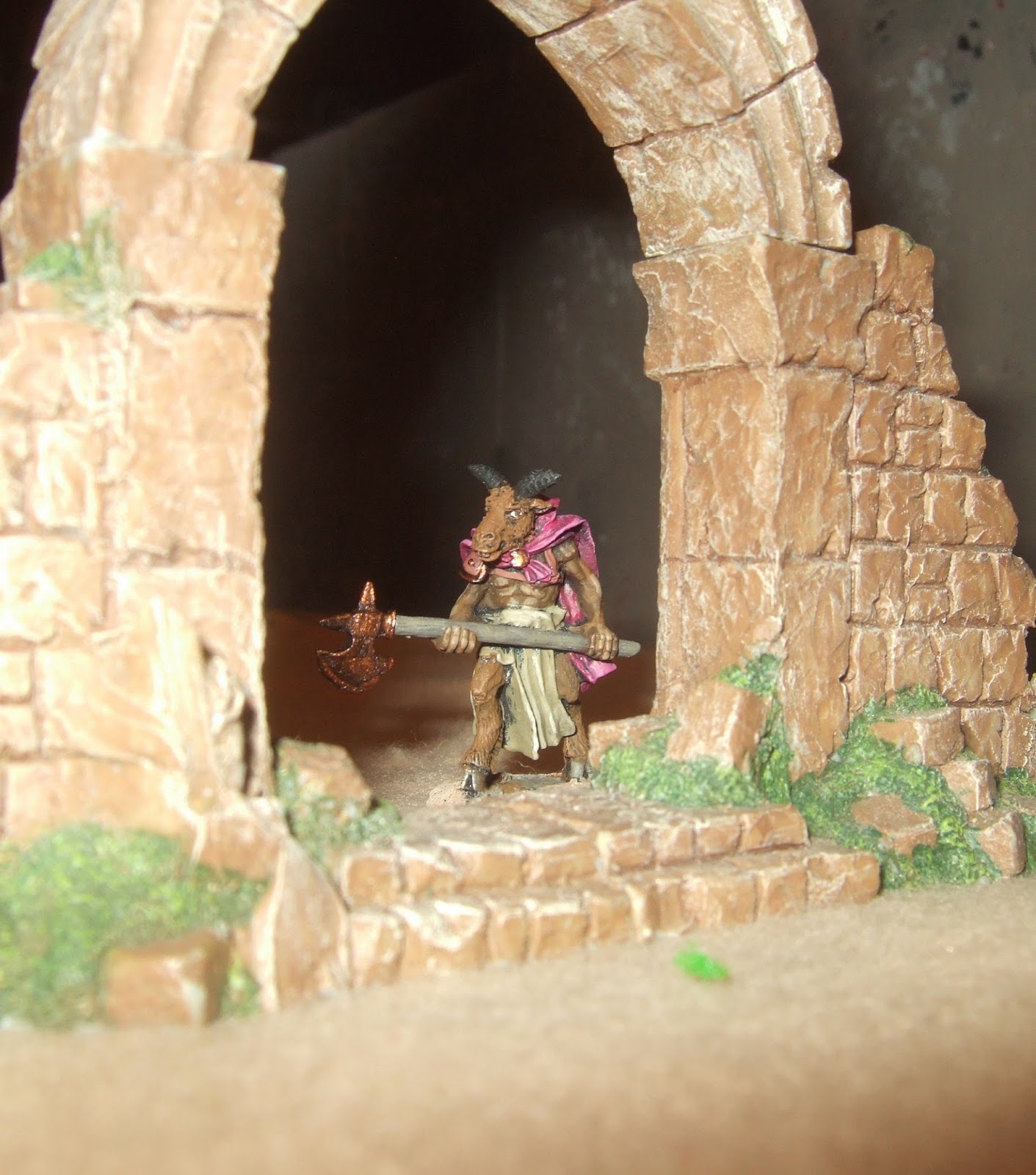 I'm going to leave him singly based so that he can participate in my future Pavis skirmish campaign.
Posted by Counterpane at 12:04 AM 5 comments:

A Statue Exceedingly Bare and a Great Book Shop

My new regular destination when shopping in Liverpool is Henry Bohn Books,   It's one of those marvellous second-hand bookshops that's literally crammed from floor to ceiling.  There's a pretty good military history section and while I couldn't find Christopher Duffy's The Military Experience in the Age of Reason, I did find this for a fiver: 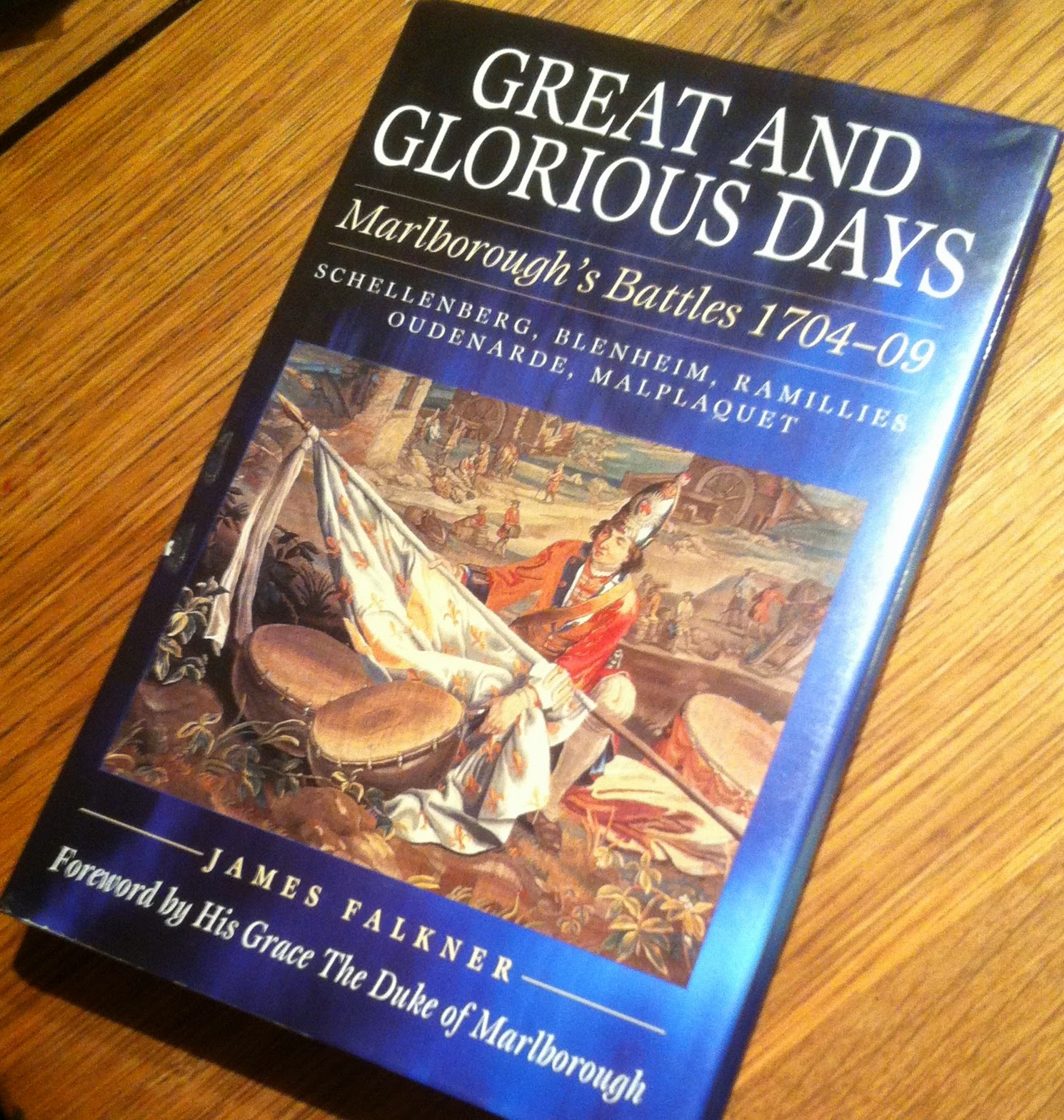 I'm also very pleased to have picked up Victory in the West, the two volume HMSO official history of the British campaigns in northern Europe from D Day to the fall of the Third Reich.  I suspect the text may be available on line somewhere but this edition has all of the fold-out maps intact. 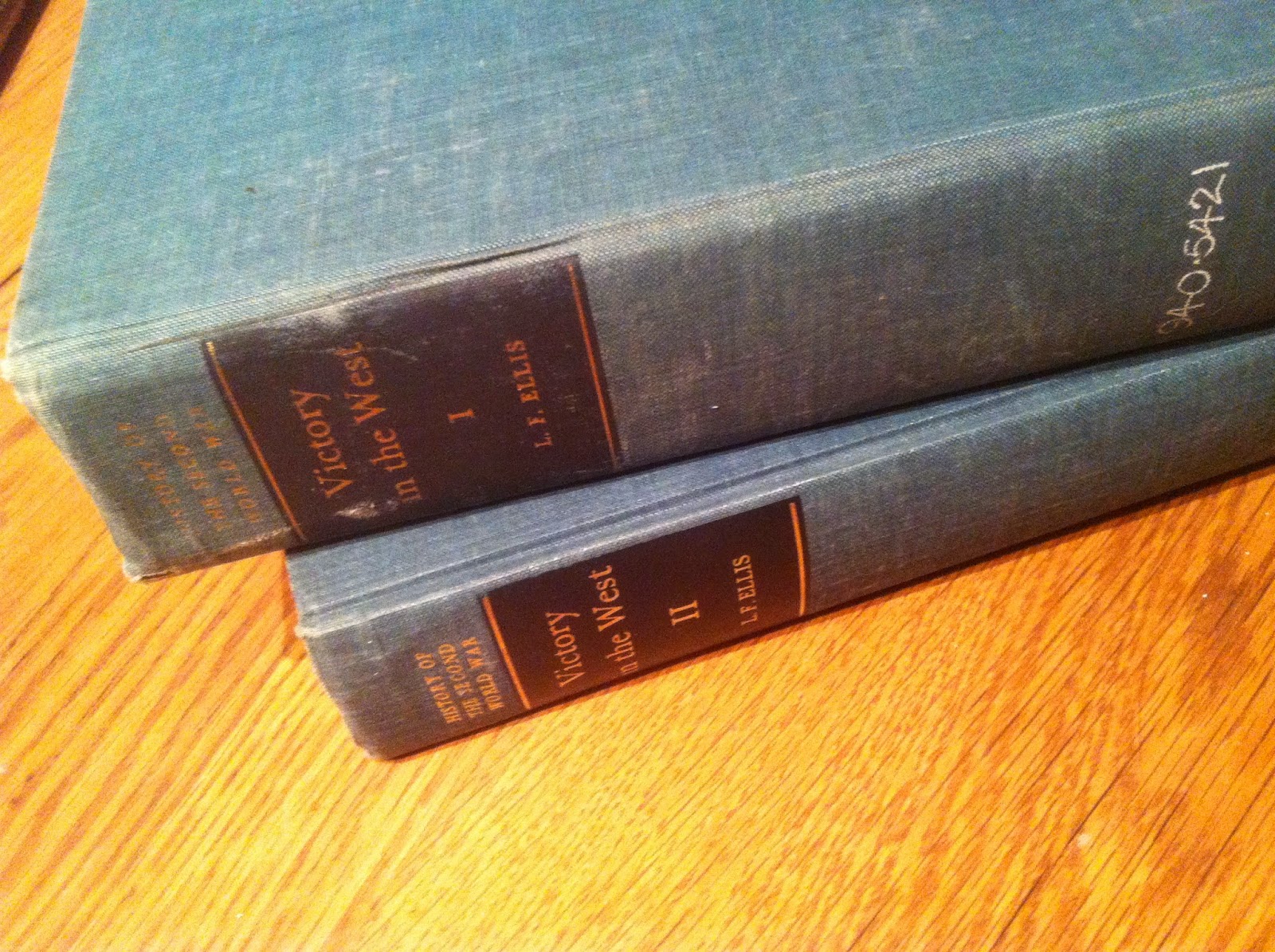 Posted by Counterpane at 4:02 PM 4 comments:

I popped into Antics Models in Sheffield in search of suitable model railway scenic items to tart up the Dapol cottage but gave up.  Everything was either eye-wateringly expensive or not that useful or both.  I'm therefore declaring the cottage finished and moving on. 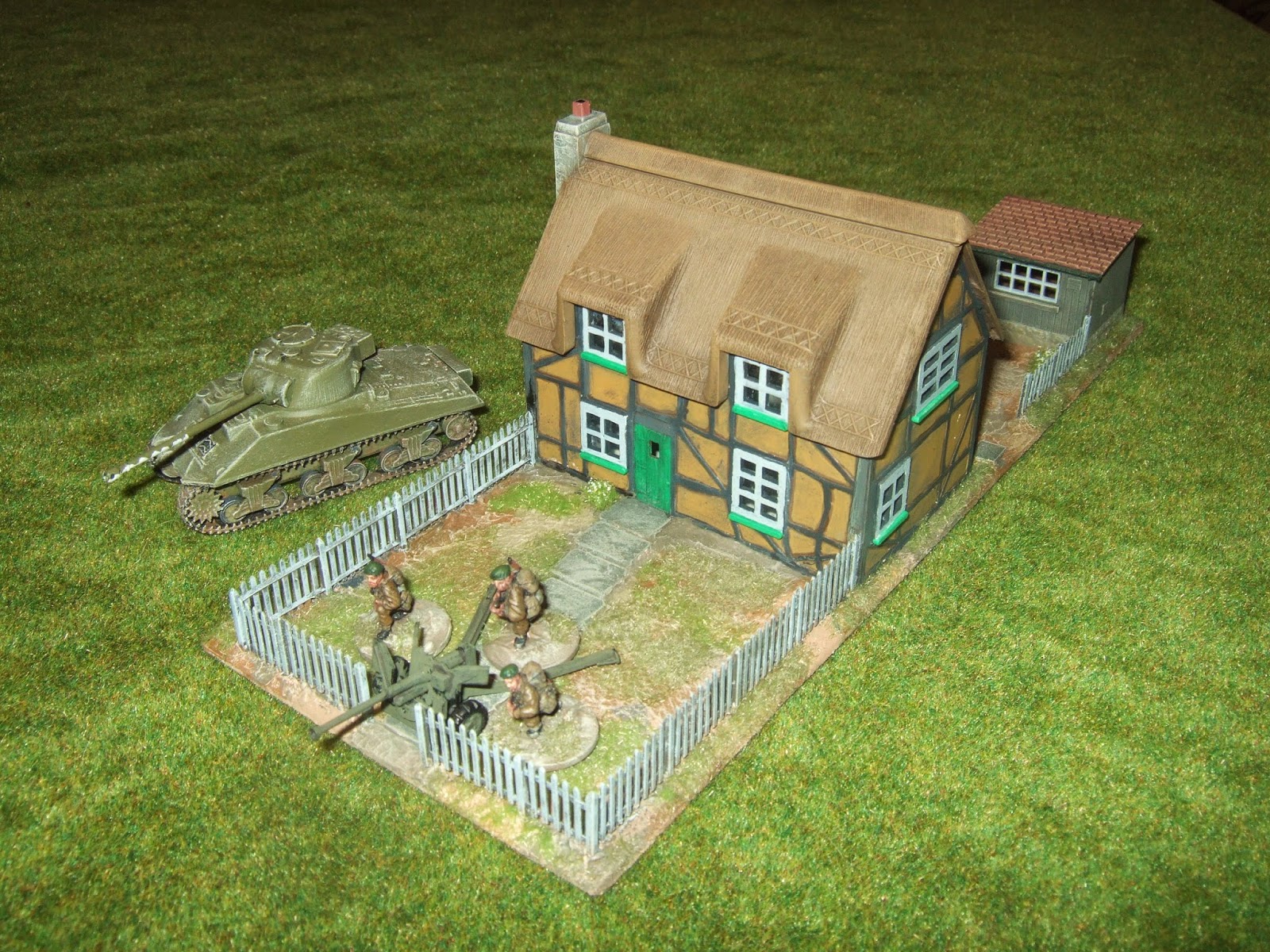 I'm not convinced that the building itself justified the effort I've put into it but it'll do. 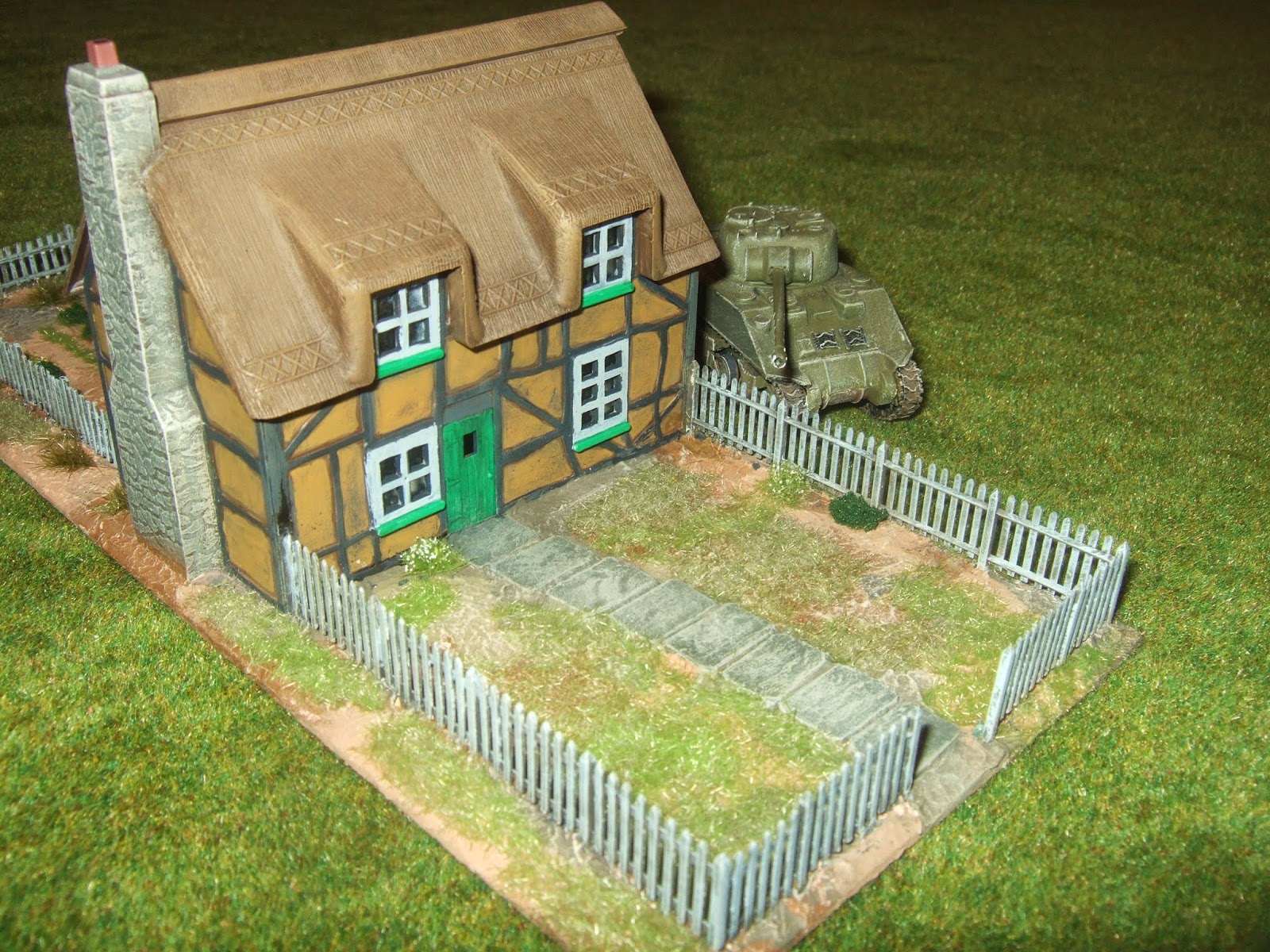 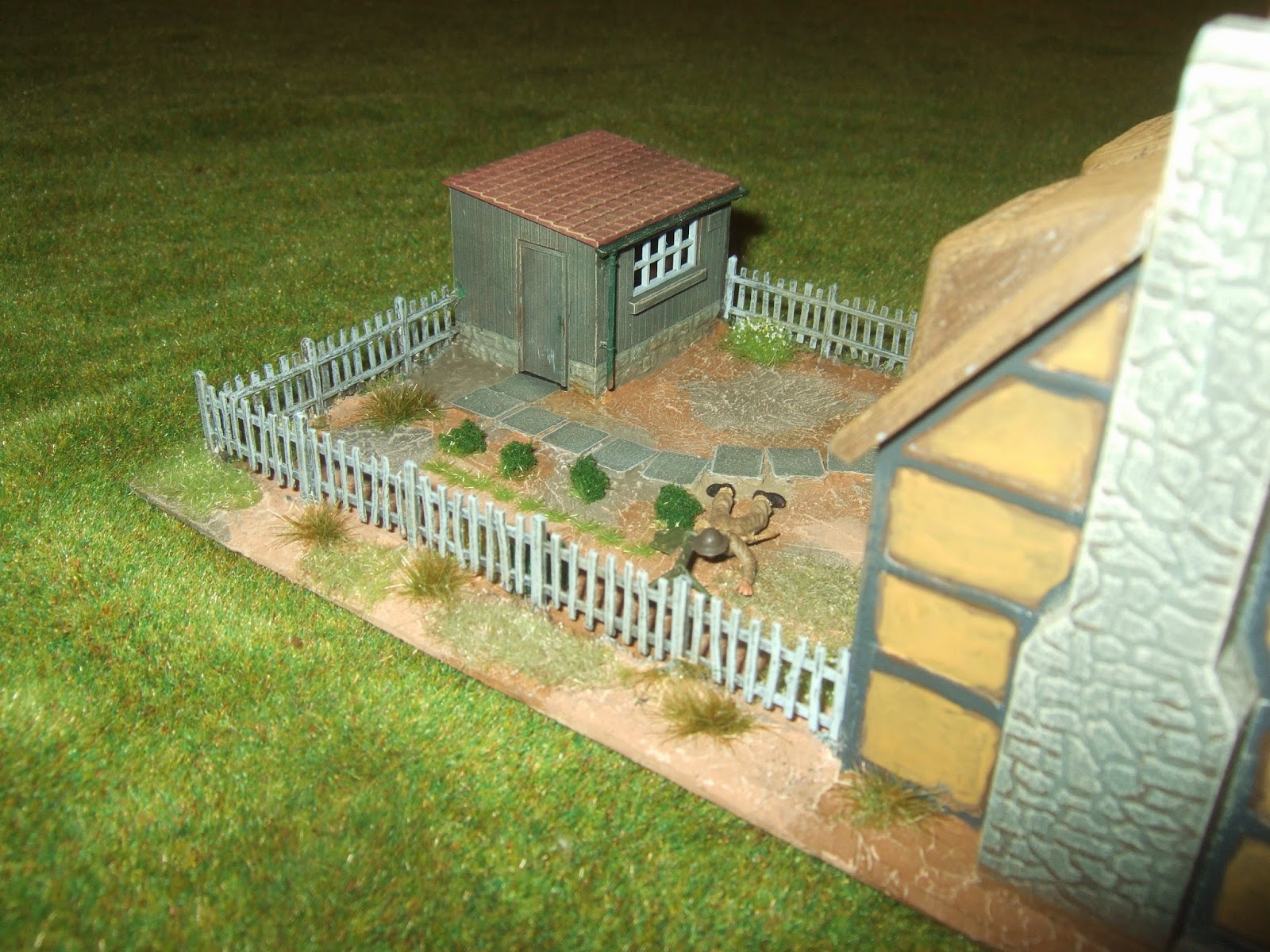 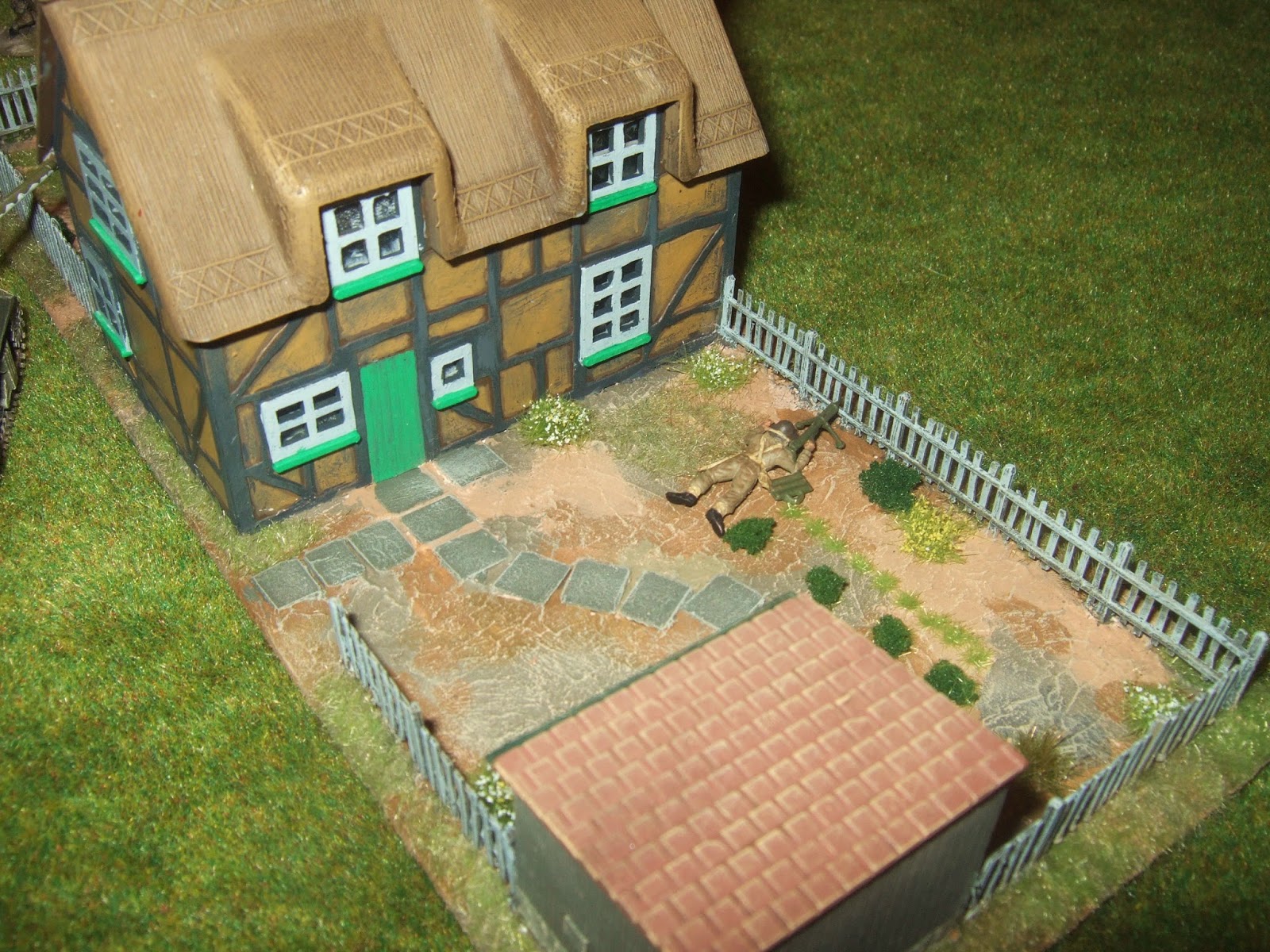 Posted by Counterpane at 1:06 PM 6 comments:

I've not had much time to make further progress with the Airfix/Dapol cottage but I have got the fence and the groundwork painted: 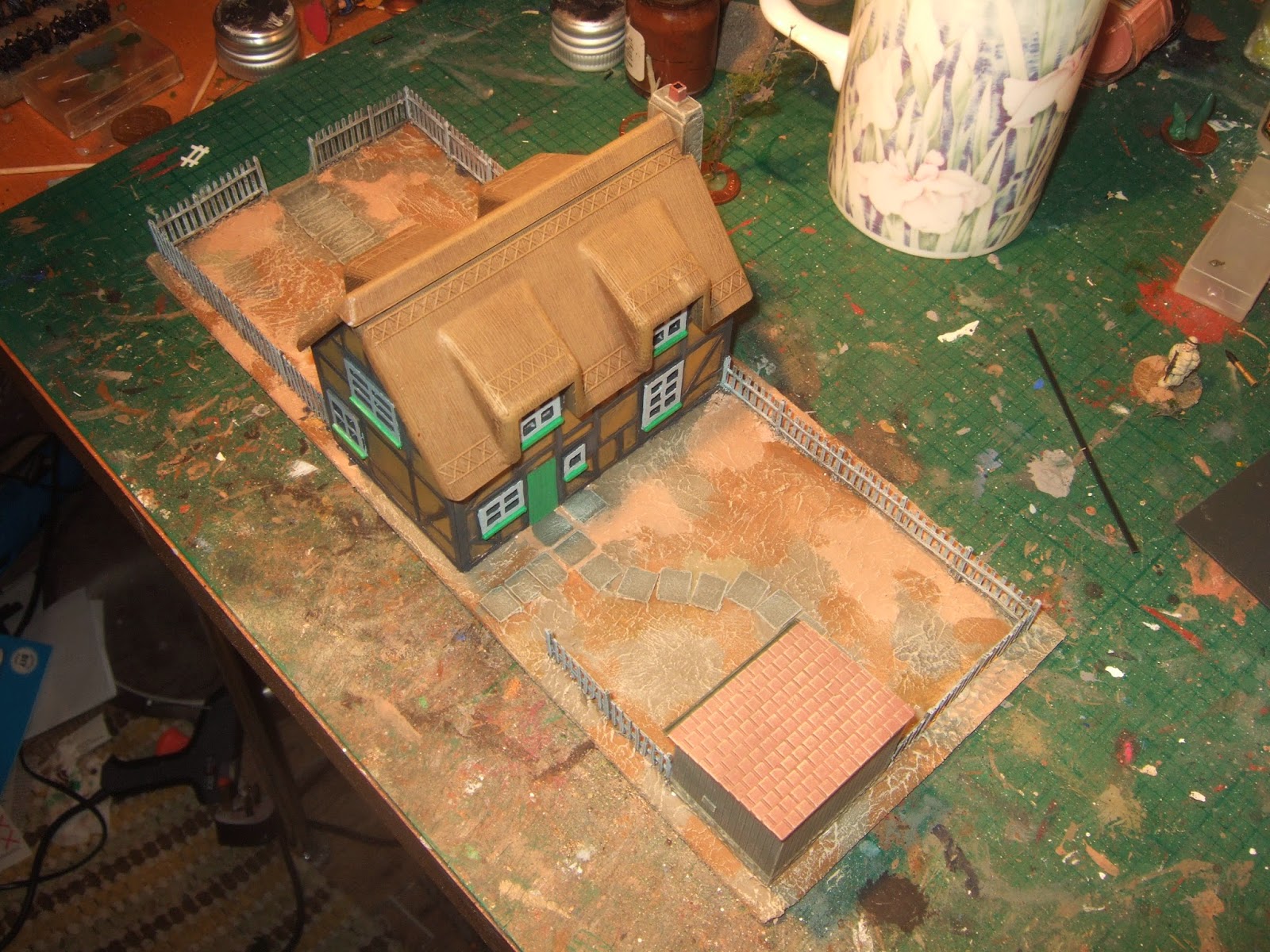 Next step is to landscape the two gardens.  I might pop into the local model railway shop and see if I can pick up any useful items. 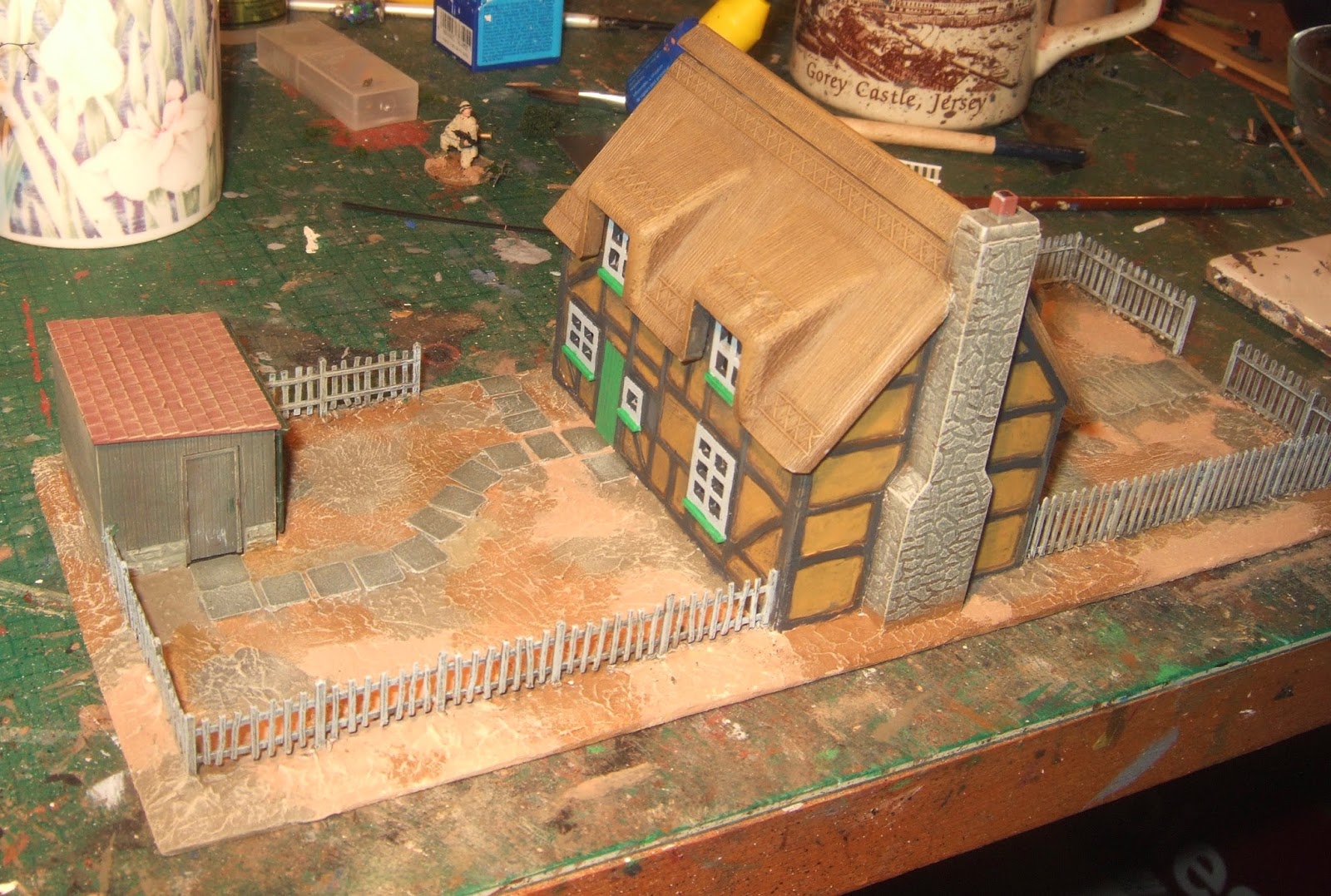 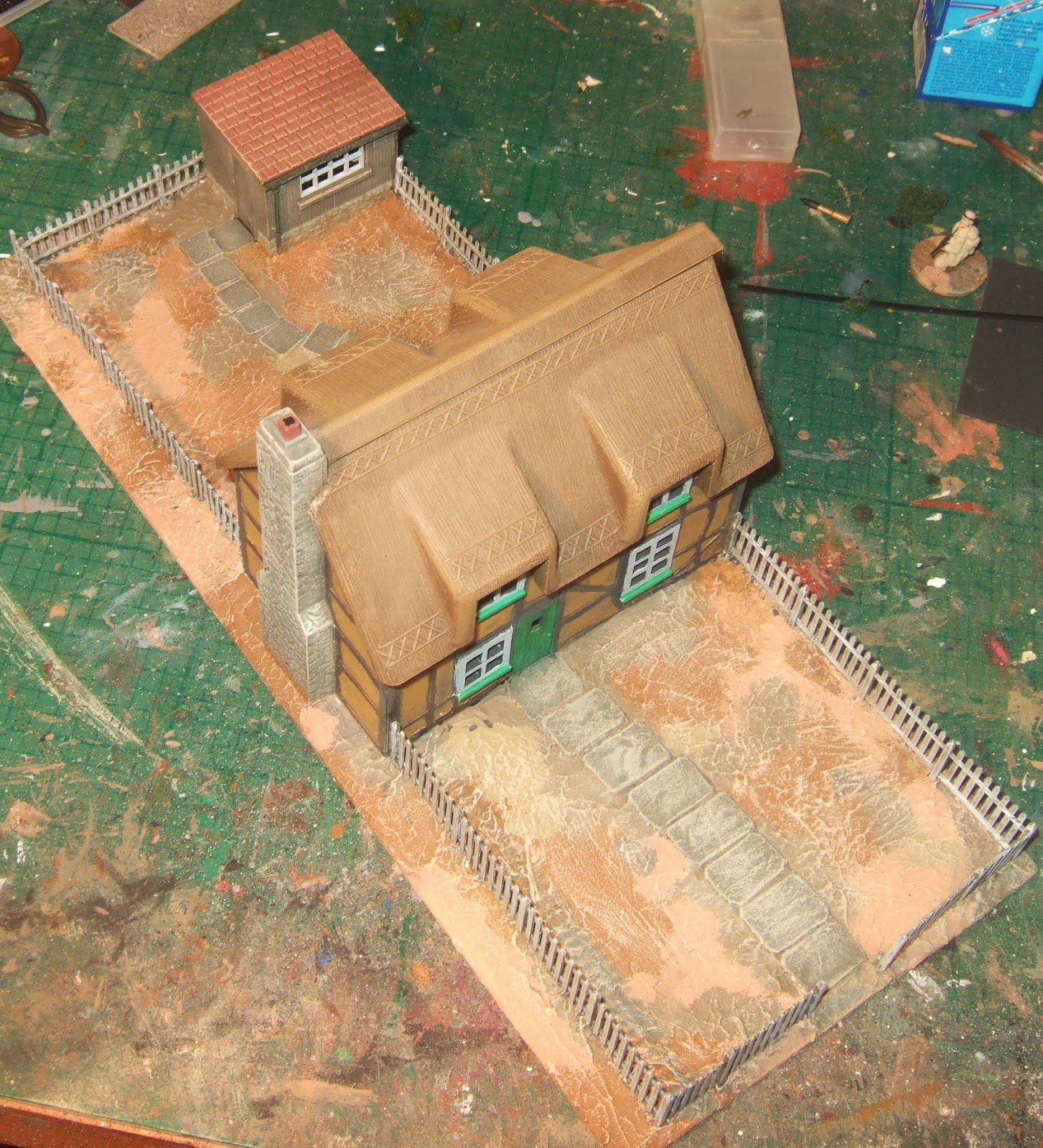 Posted by Counterpane at 3:22 PM No comments: 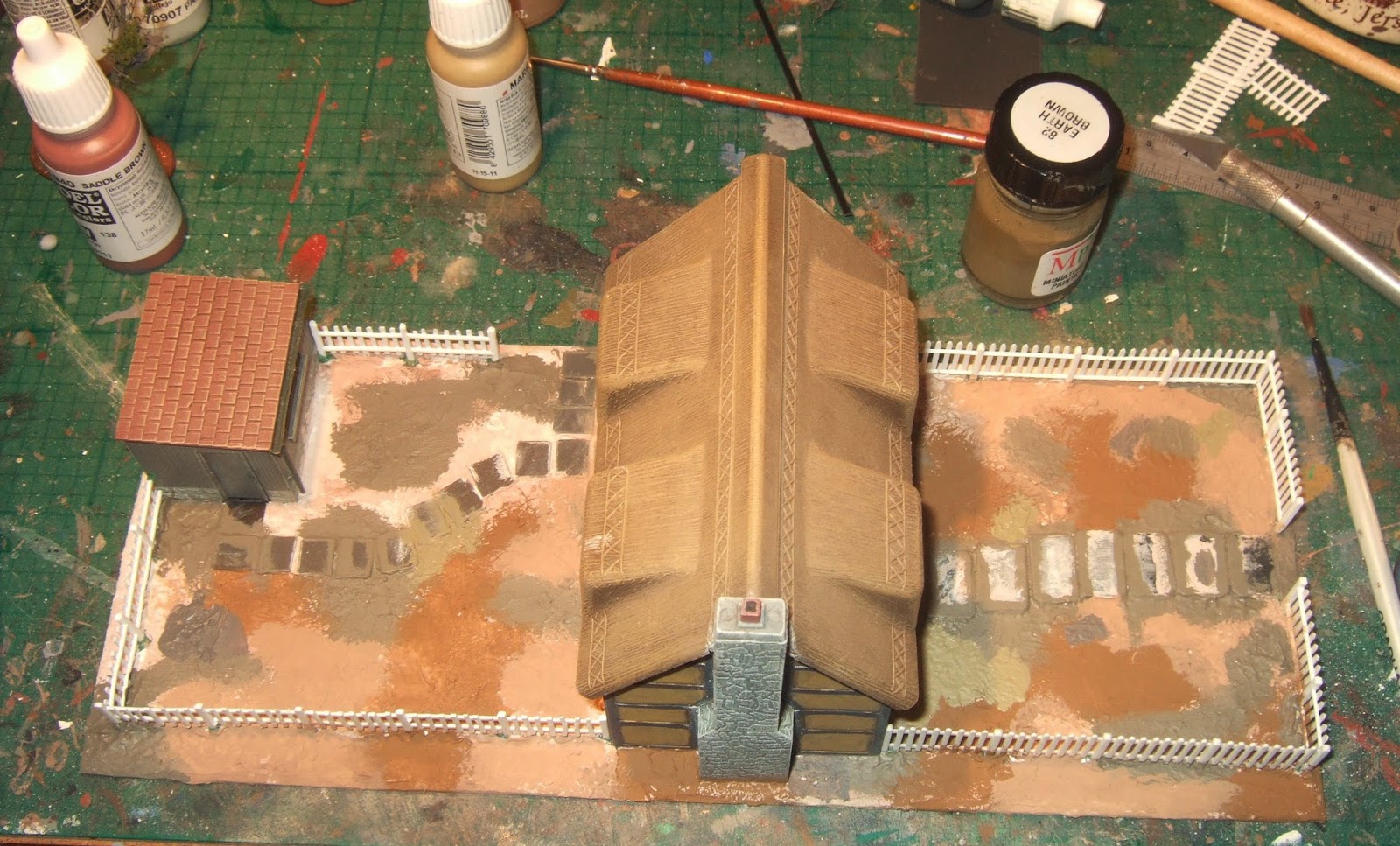 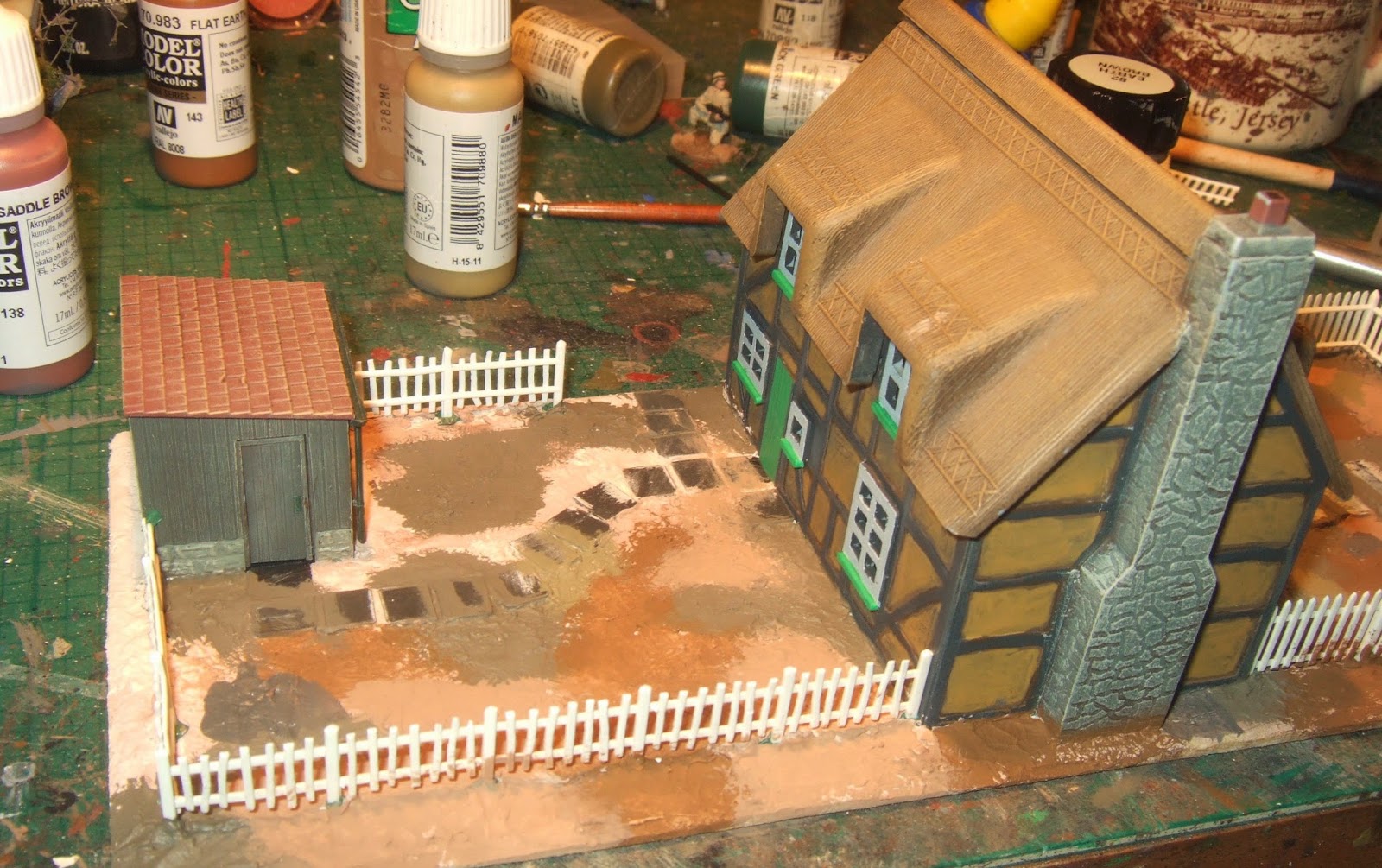 On the Workbench - attractive property, 2 bdms

After playing the New Year's Eve Pulp Alley game, I found myself keen to do some more terrain modelling.  I knew I could do a better job of crating a cottage with a back garden than I'd managed with the available 28mm stuff.

A quick trawl through the haul of available storage boxes revealed a long, narrow box that would fit a half-completed Airfix/Dapol thatched cottage.  I then had a look through the terrain items box and found some Ratio picket fencing that would do nicely to the property boundaries.

I then remembered the Platelayer's Hut model that came as a freebie on the front of Railway modeller.  I reckoned that this would make a decent garden shed or perhaps outside toilet. 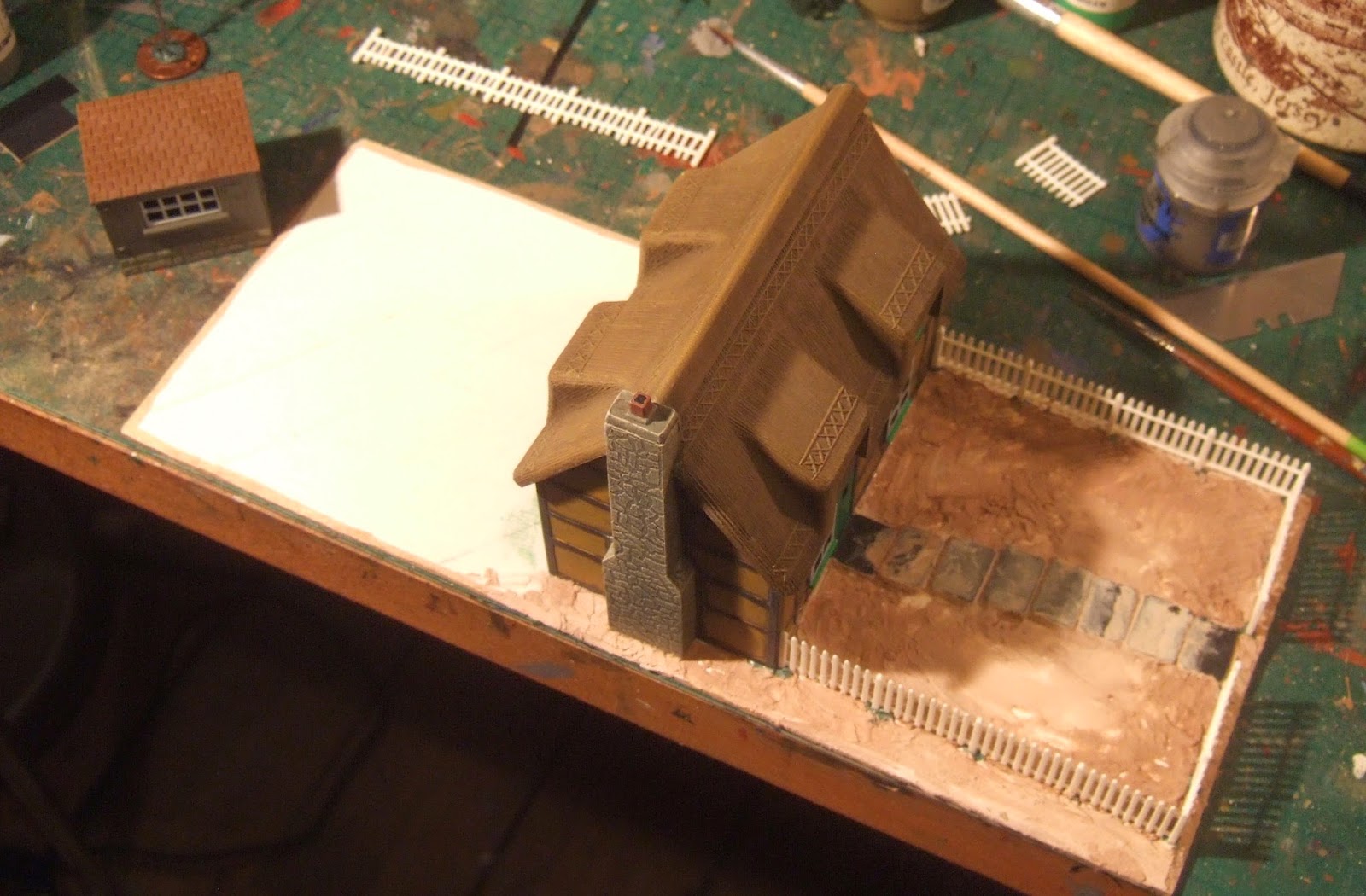 I've used some rough rectangles of artist's mounting board to make a garden path in the front and there'll be something similar in the back. 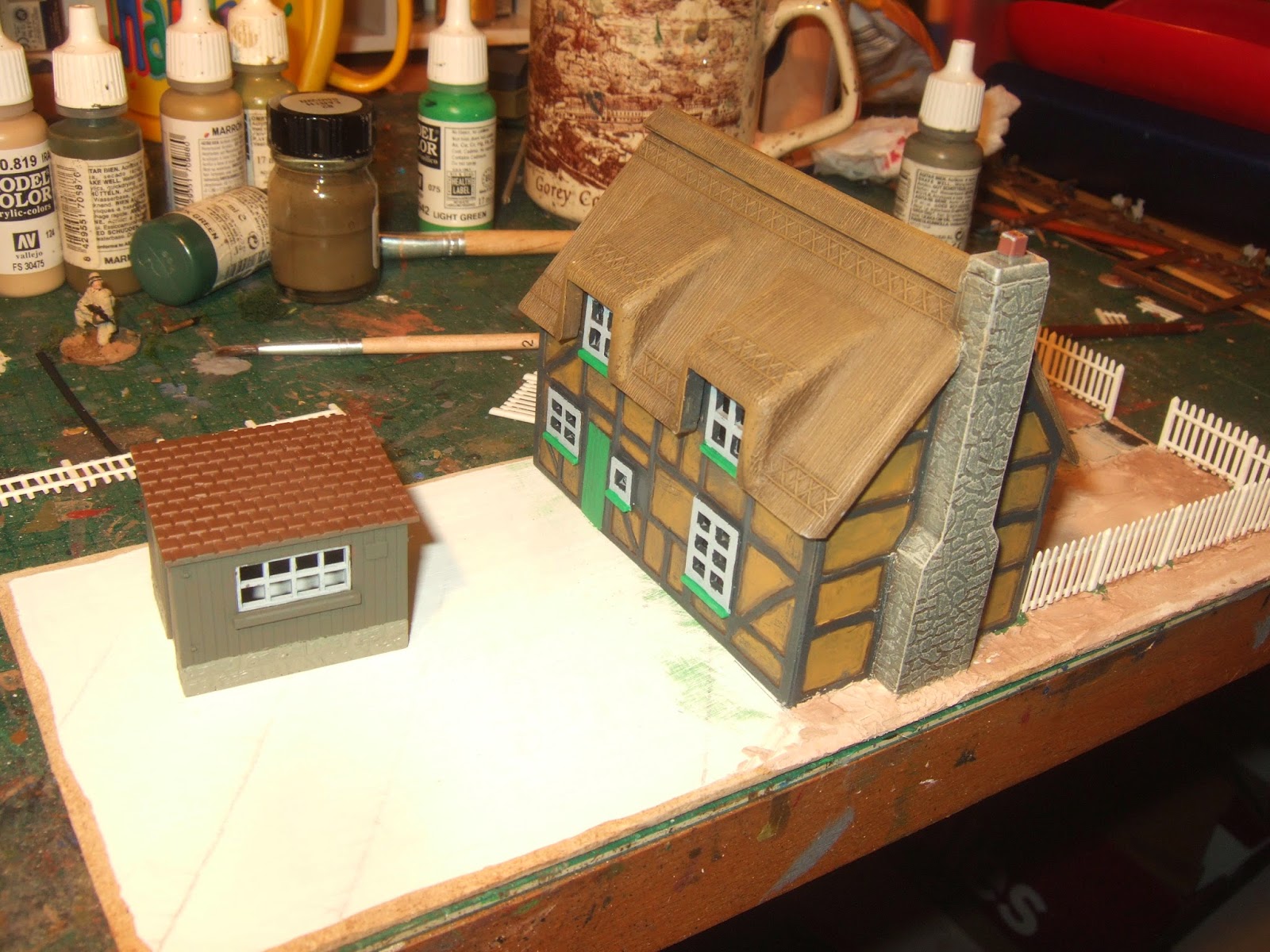 I'm not really sure how much use this will see.  It's obviously fine for Operation Sealion or AVBCW but I don't have plans to do either in 20mm at the moment.  I think I bought it with the Rommel's Route To Verdun campaign in mind.  Still, once it's put away in its box it'll be out of the way and I can cross it off the list of unfinished stuff.

Posted by Counterpane at 9:34 AM No comments:

This year's rash of Christmas to New Year gaming culminated in yesterday's four player Pulp Alley game.  I set this up as a potential first episode of a campaign but I have to bear in mind the possibility that it may be  months before we get to play episode 2!

The campaign rejoices in the title of "The Quest for Faulkner's Balls" but at this stage the focus was on finding the Reverend William Featherstonehaugh and a mysterious book said to be in his possession. 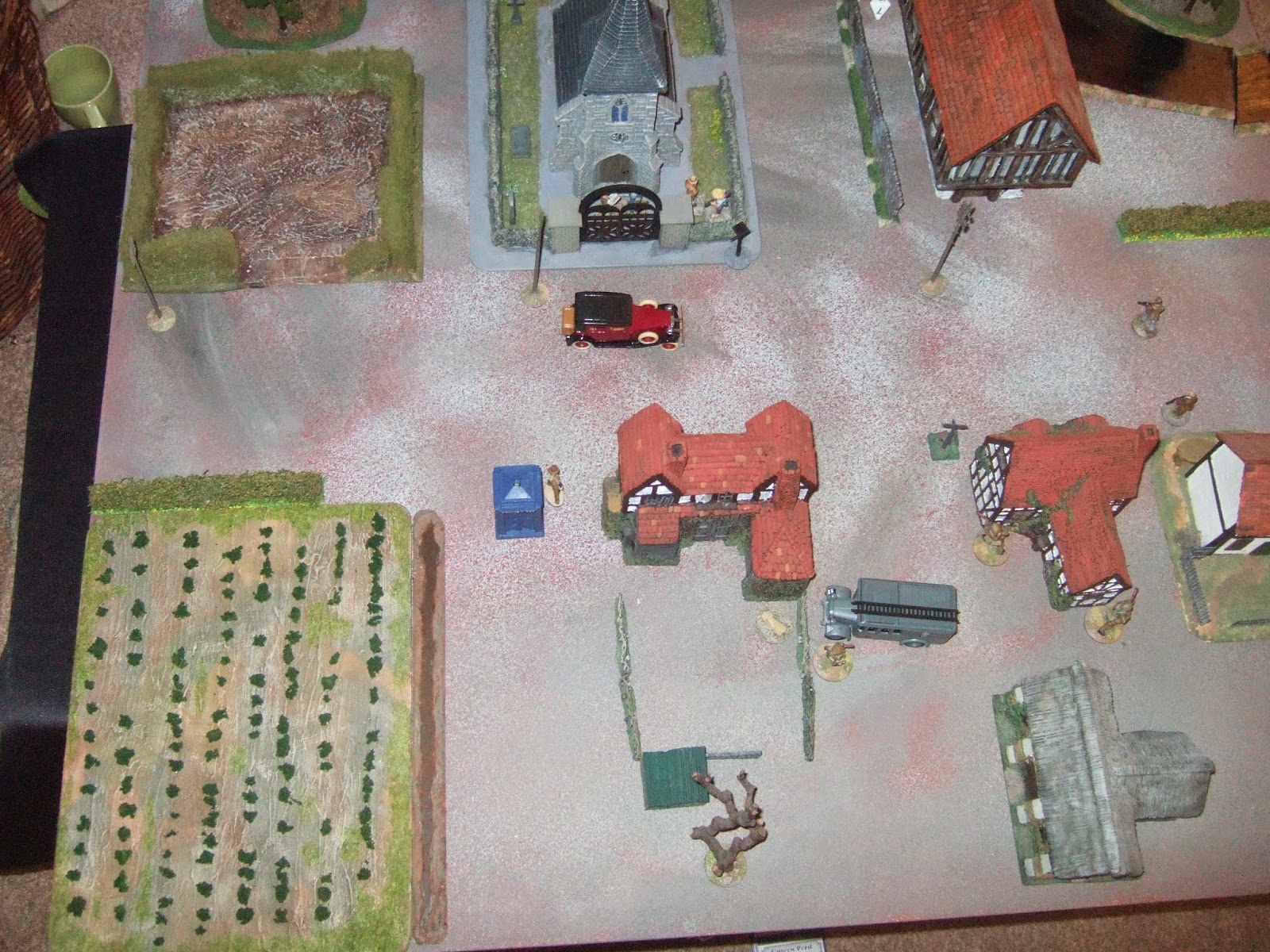 The setting was the charming English village of Little Pottering, where the rural quiet was shattered by the sudden arrival of North London wide boys The Muswell Hill Mob (played by Richard Sangar) in their, probably stolen, red Rolls Royce.  Equally out of place were the soldiers of UNIT (led by Jamie Crawley) who arrived in an anonymous-looking van. 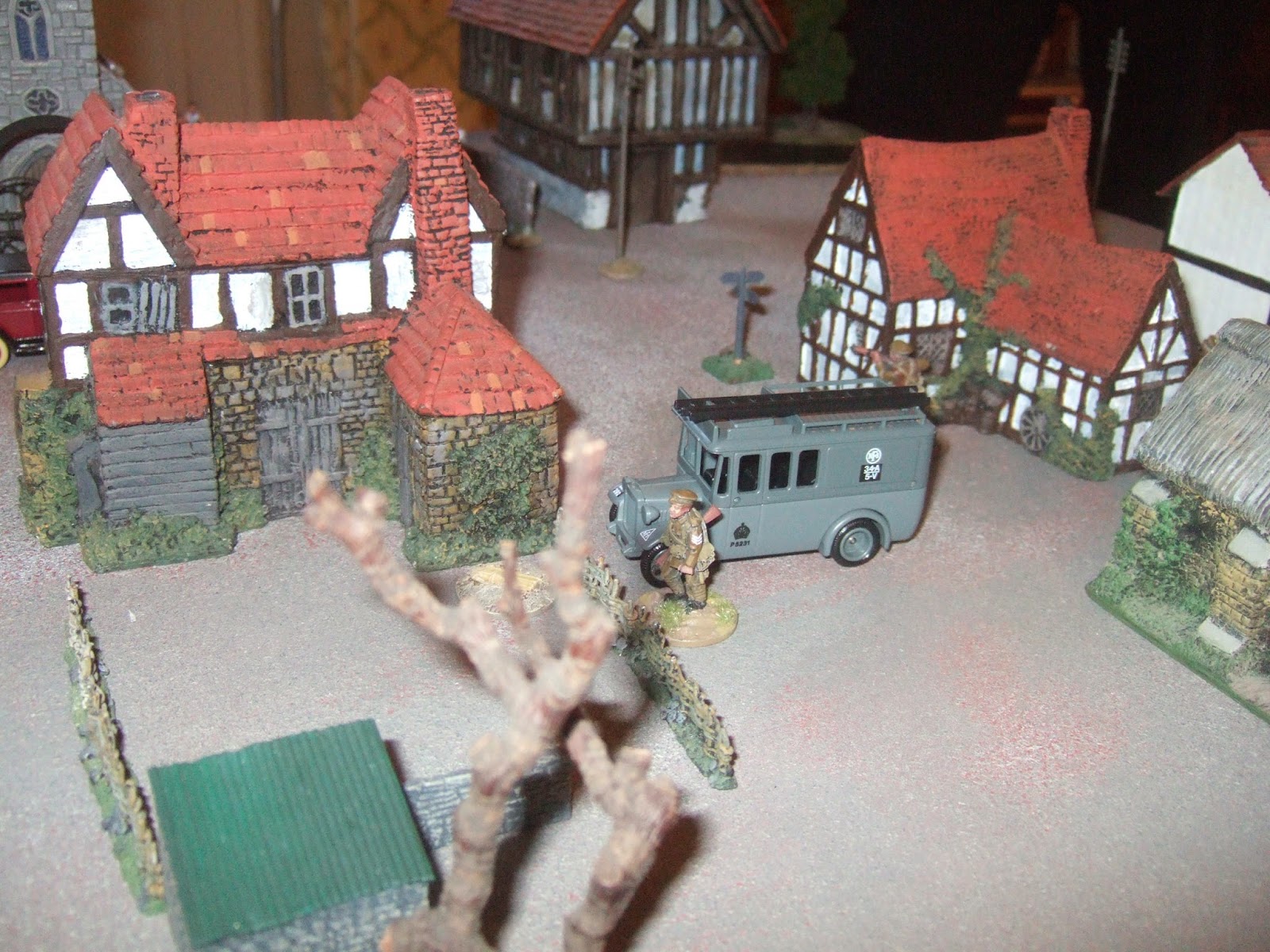 Already in the village were the Brotherhood (or is it perhaps Der Bruderschaft?) a shadowy organisation with doubtless nefarious aims that on this occasion was under the direction of Andy Sangar.  The quartet of participants was completed by Gus Woodward who ran the Friends of the Rev Featherstonehaugh. 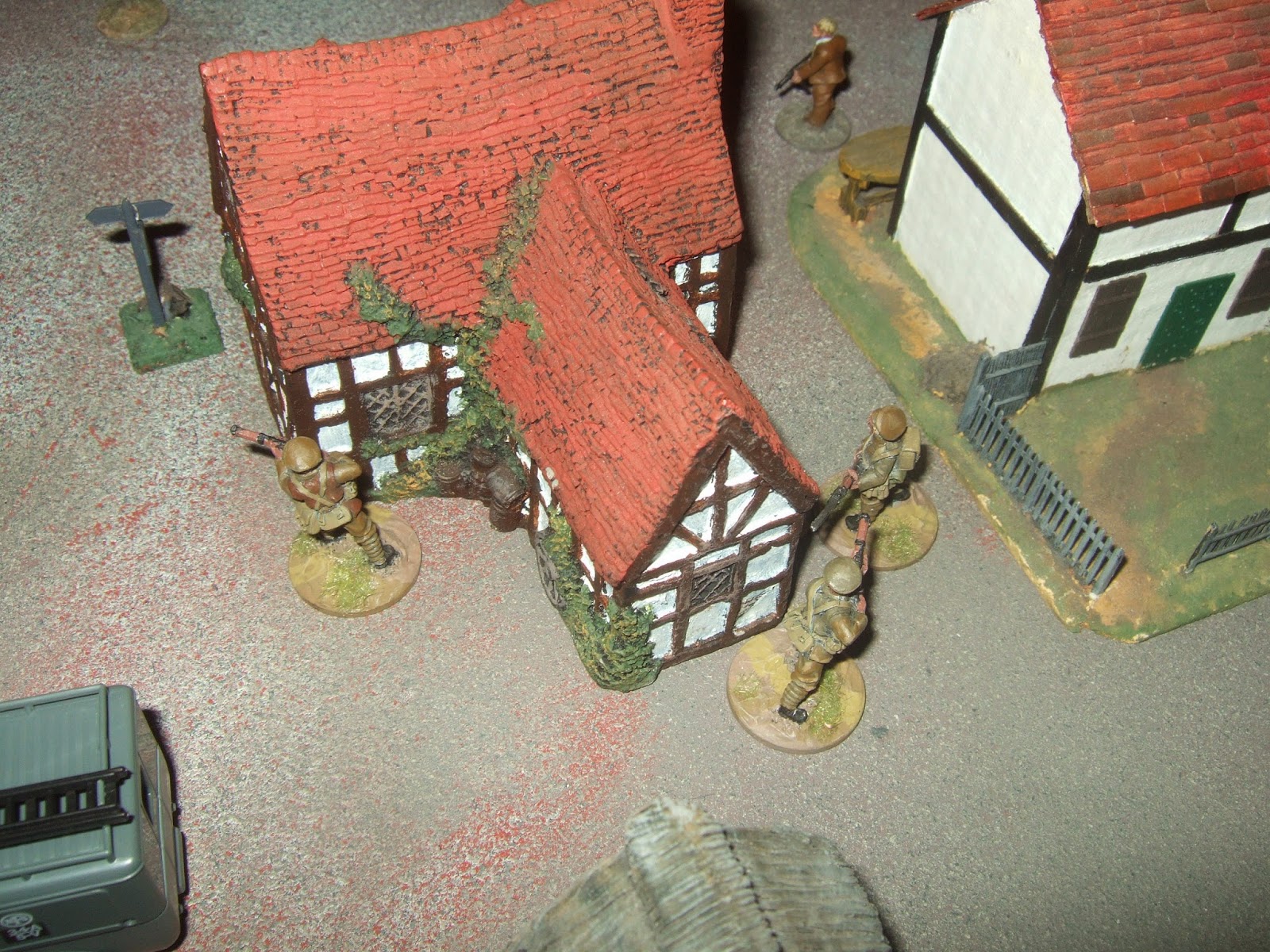 The event began with heavily armed British soldiers debussing from their van (devanning?) in the High Street.  They soon encountered equally heavily armed Brotherhood agents.  Clearly this was not a normal day in Little Pottering. 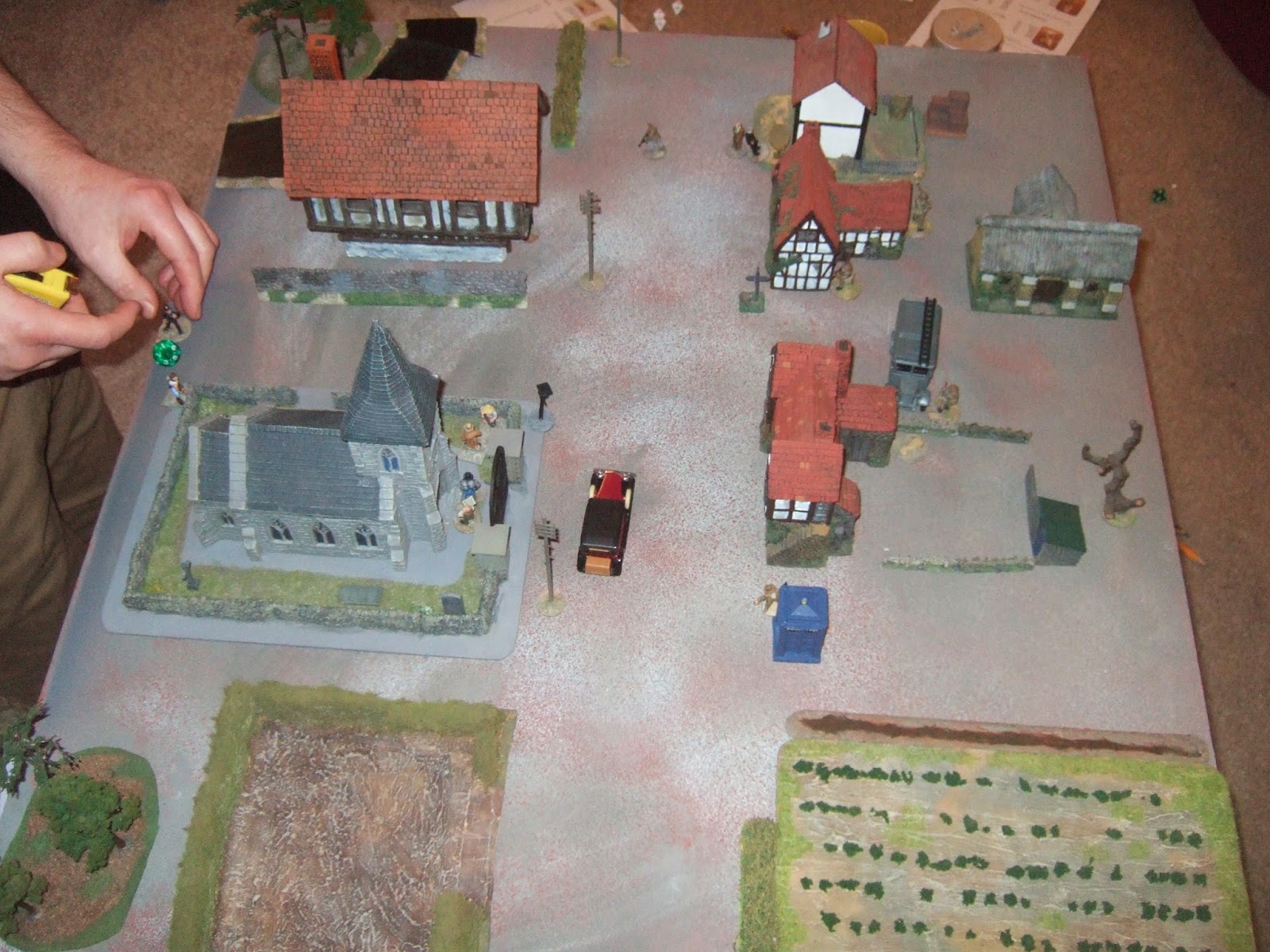 Early on in the game (at the start of Game Turn 2) Jamie played the "Parley" card thus preventing any gunfire or brawling for a turn.  This led to an interesting situation when Anders von Krausschlek climbed into the driver's seat of the Muswell Hill Mob's Rolls and found himself sharing the vehicle with Mob members Liquid Len and Harold Demure.

A digression is called for here.  On the fly, Jamie came up with a background for Anders who was UNIT's "Contact" as a result of their Network of Supporters perk.  Anders, it seems, is not a fan of the Nazis not least because the Gestapo have taken over Schloss Krausschlek for their own nefarious purposes.  But back to the action...

When the Parley expired, there was an immediate brawl between von Krauschlek and Liquid Len which led to both being knocked down and falling out of the car.  At which point Harold Demure climbed into the driver's seat and drove off! 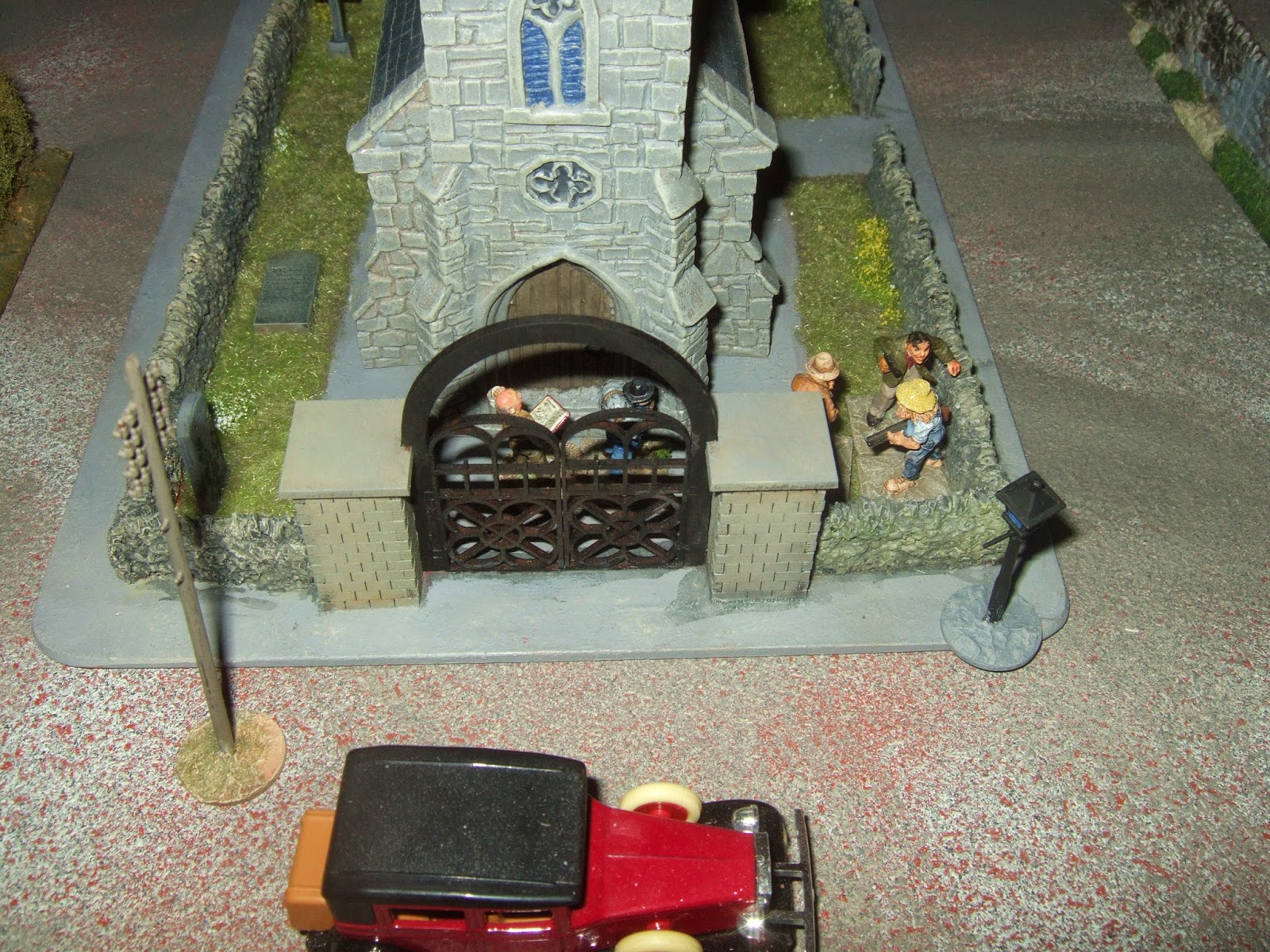 As the Rolls left the scene it did so past St Custard's churchyard where Miller and Notter, the leaders of the Muswell Hill Mob, were interrogating Bob the incomprehensible local.  Thanks to unlucky dice rolls this would take the two of them two whole turns, upon which Bob turned out to be not-a-Plot-Point-at-all thanks to a Red Herring reward card!


By this time, Gus had found the first clue to the Rev's whereabouts in the form of a mysterious bronze statue but Jamie subsequently sized the initiative when UNIT realise the significance of the partial stone statue in the rear yard of the Fool and Bladder.

Richard, meanwhile, had checked out the Police telephone box.  Somewhat surprisingly it turned out to be no larger on the inside than it was on the outside!

Harold Demure, meanwhile, decided to have a go at causing mayhem by driving the Rolls through the narrow streets of Little Pottering without due care and attention. 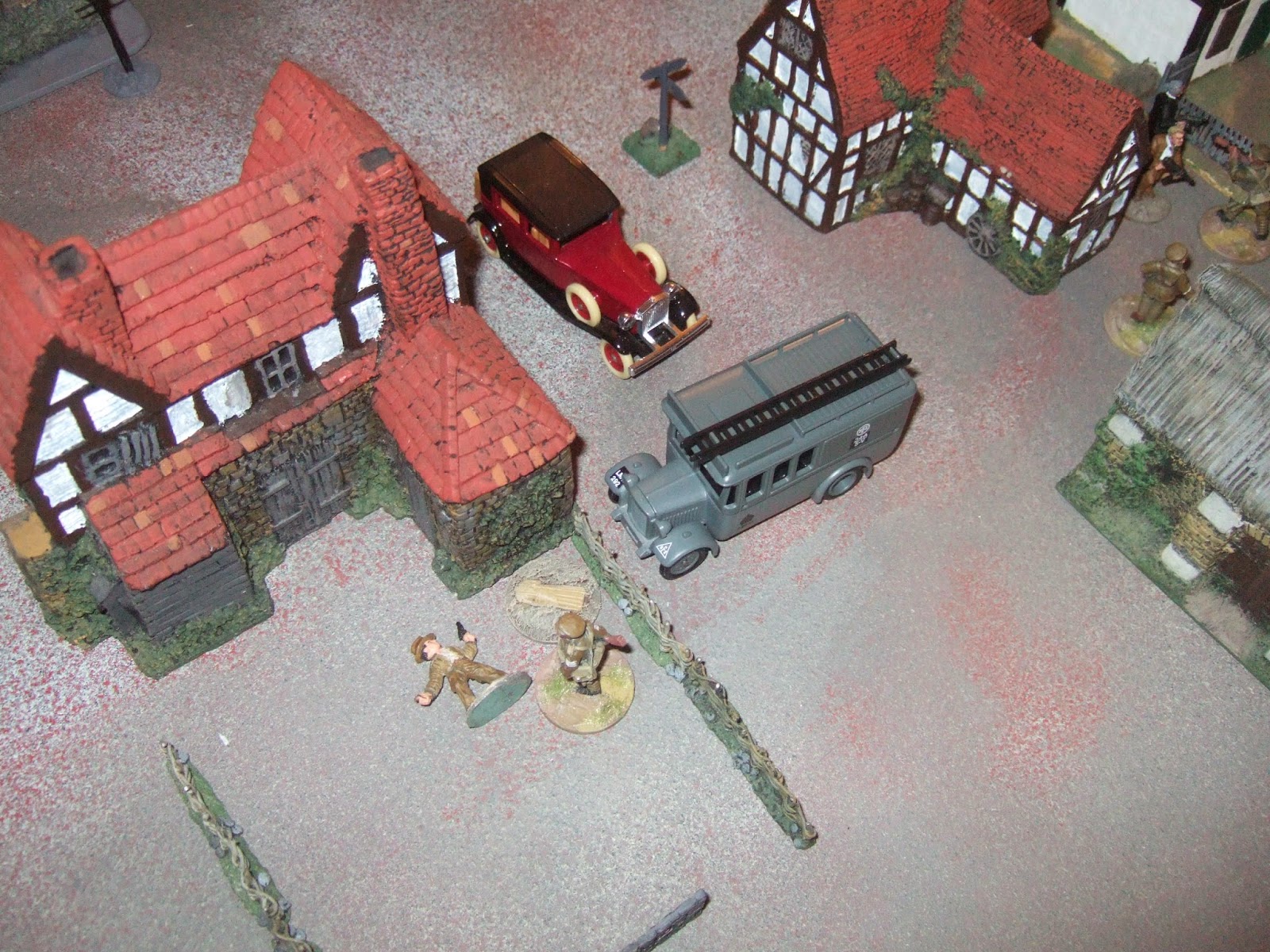 He narrowly missed the UNIT van and scattered brawling characters in all directions during his mad career. 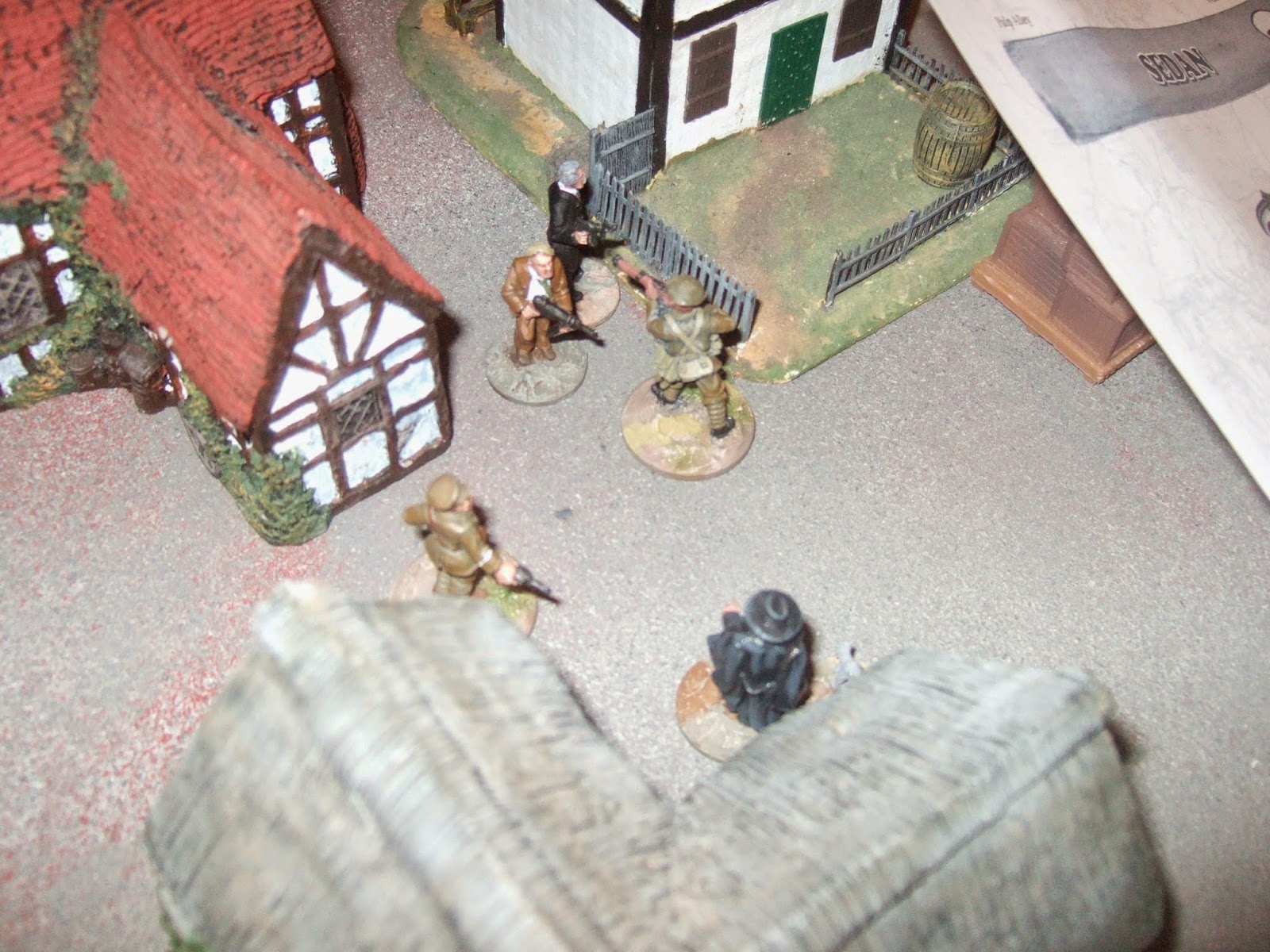 The Brotherhood, meanwhile had been going round the village collecting unconsidered Plot Points.  Their leader, von Keller, had two as the last turn approached.  He tried to run off with his gains, which included the Faulkner Journal (one of two Major Plot Points in the game), but he was chased down and by Lieutenant Lethbridge-Stewart and Sergeant Manson of UNIT.

At the end of the game the Reverend Featherstonehaugh's friends had managed to rescue him but the Journal had gone missing in the confusion (von Keller was down at the end of Game Turn 6 and so had lost control of the Plot Point at a time when no-one was able to pick it up).

The game was enjoyed by all the participants so now I think I need to provide a second episode where the hunt for the Faulkner Journal continues.


Posted by Counterpane at 8:35 AM No comments: