Pete Berry is a very bad man.  He keeps making me buy whole armies of Baccus miniatures.  The latest to achieve something like finished status is my Late Roman army:

Many of the units have been seen here before but, on painting the last few figures, I thought it time to have an overview.

The latest addition is this heavy cavalry unit: 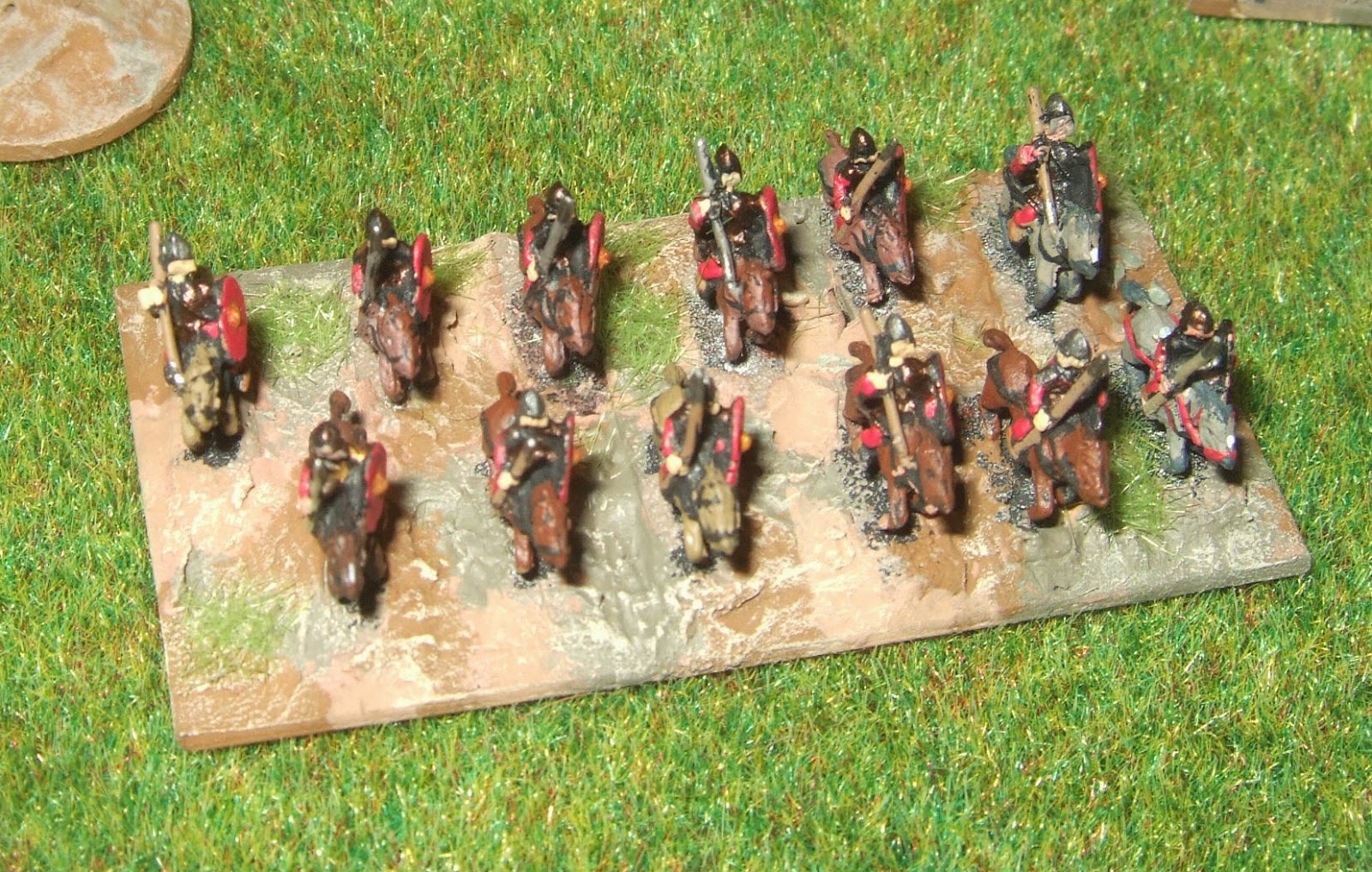 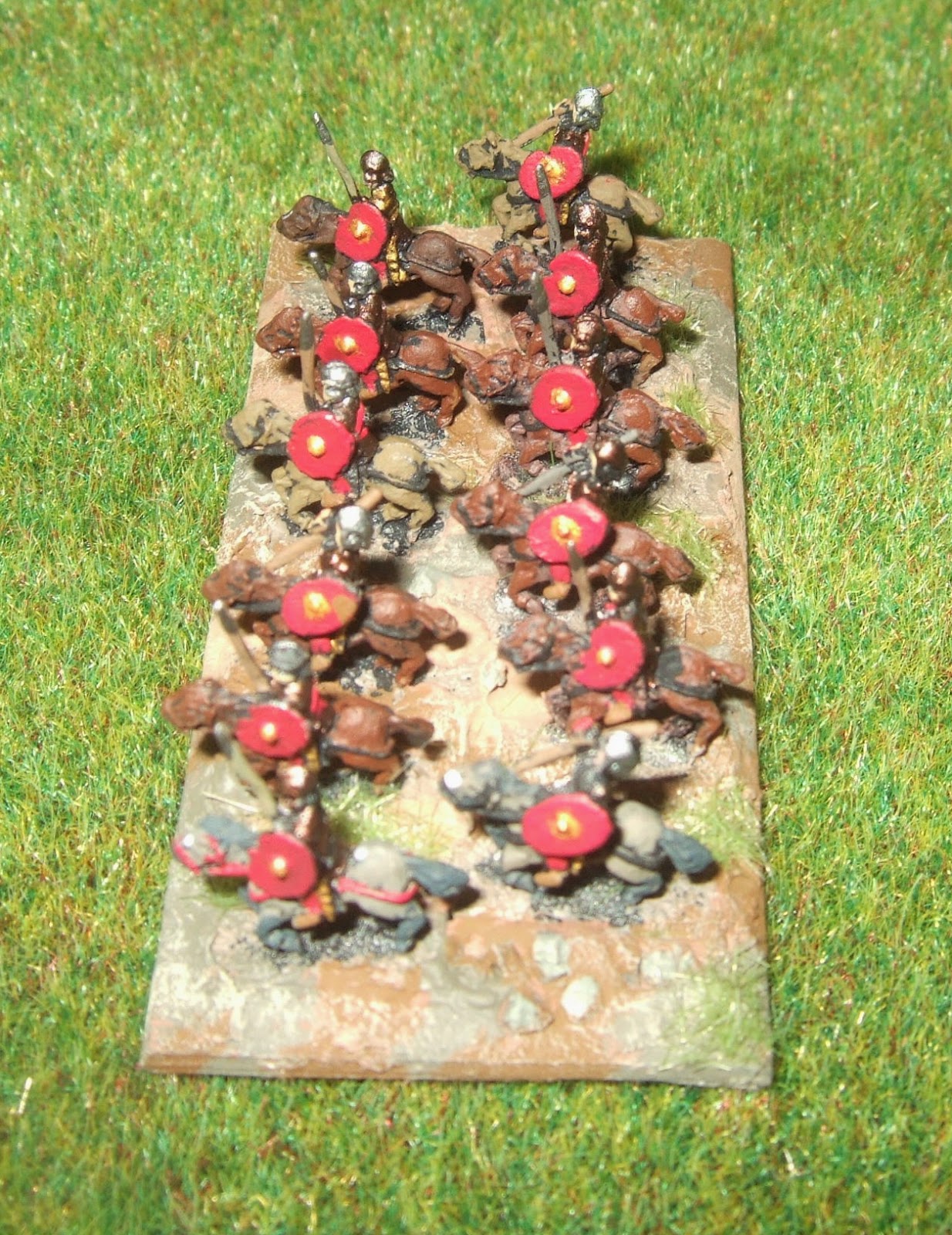 A single pack of heavy infantry gave me these four legio units.

This Auxilia Palatina unit is made from about half a pack of Lanciarii. 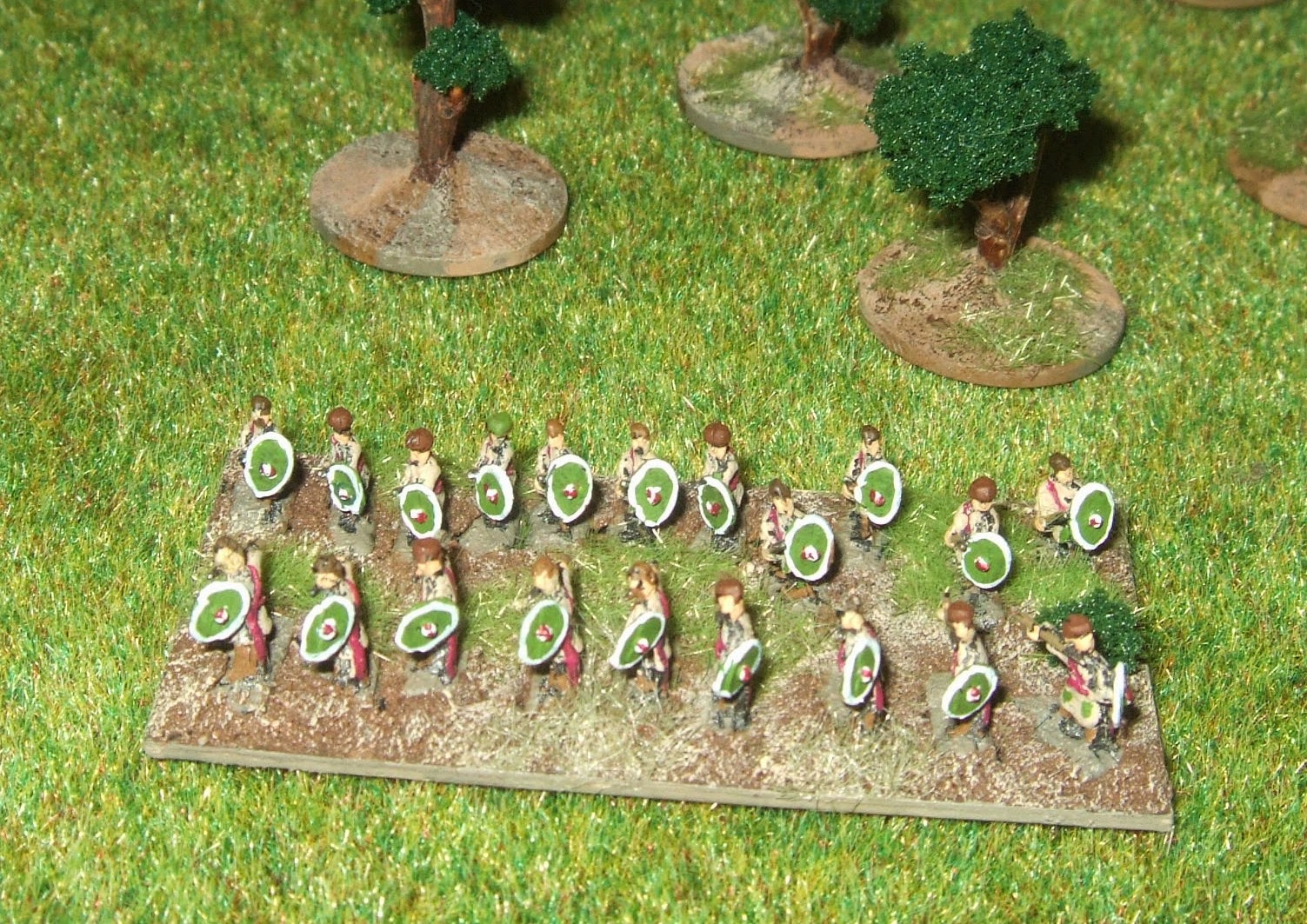 And the rest of the pack gave me these two units of actual lanciarii: 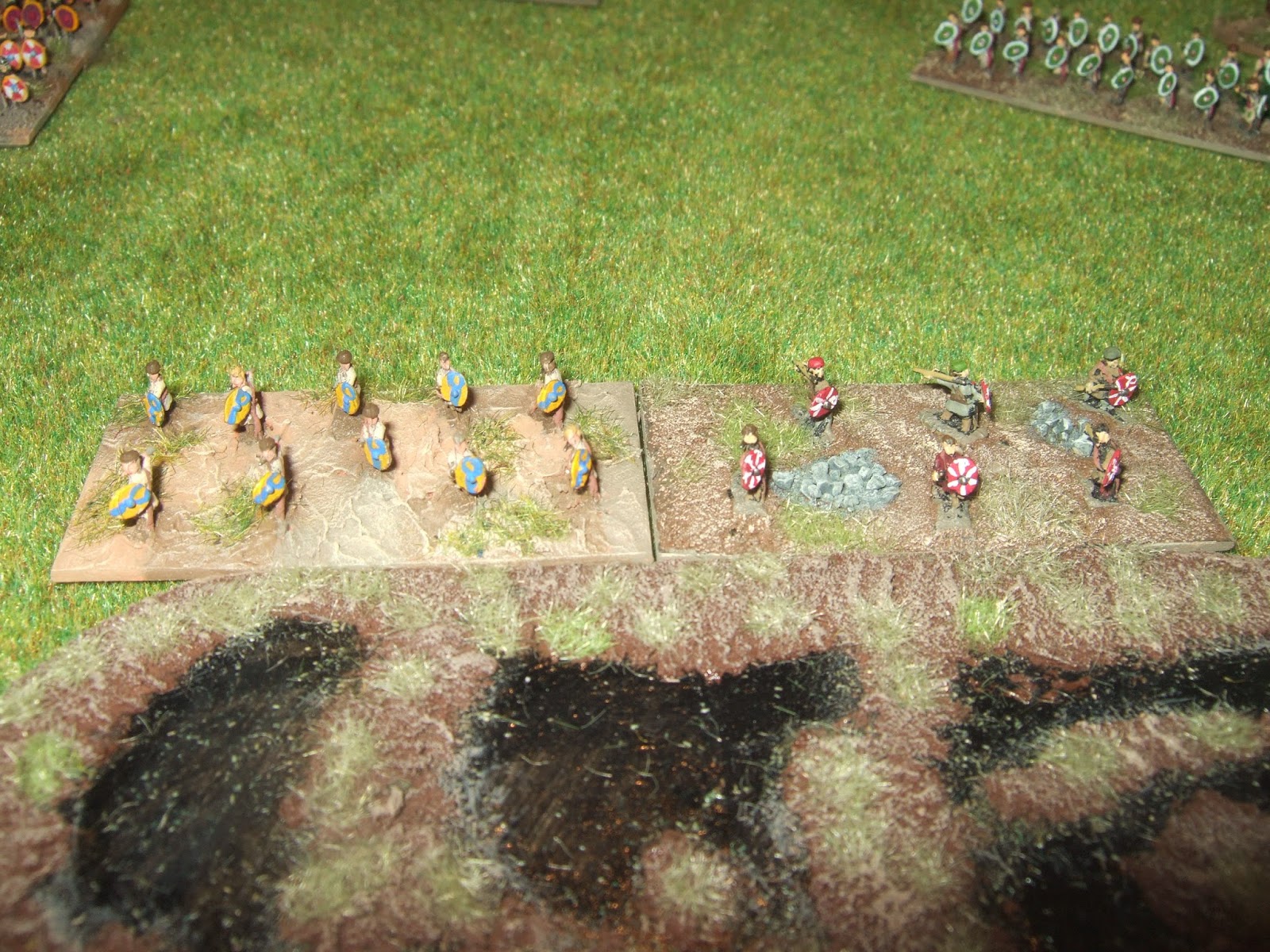 And finally, I have these four units of light cavalry: 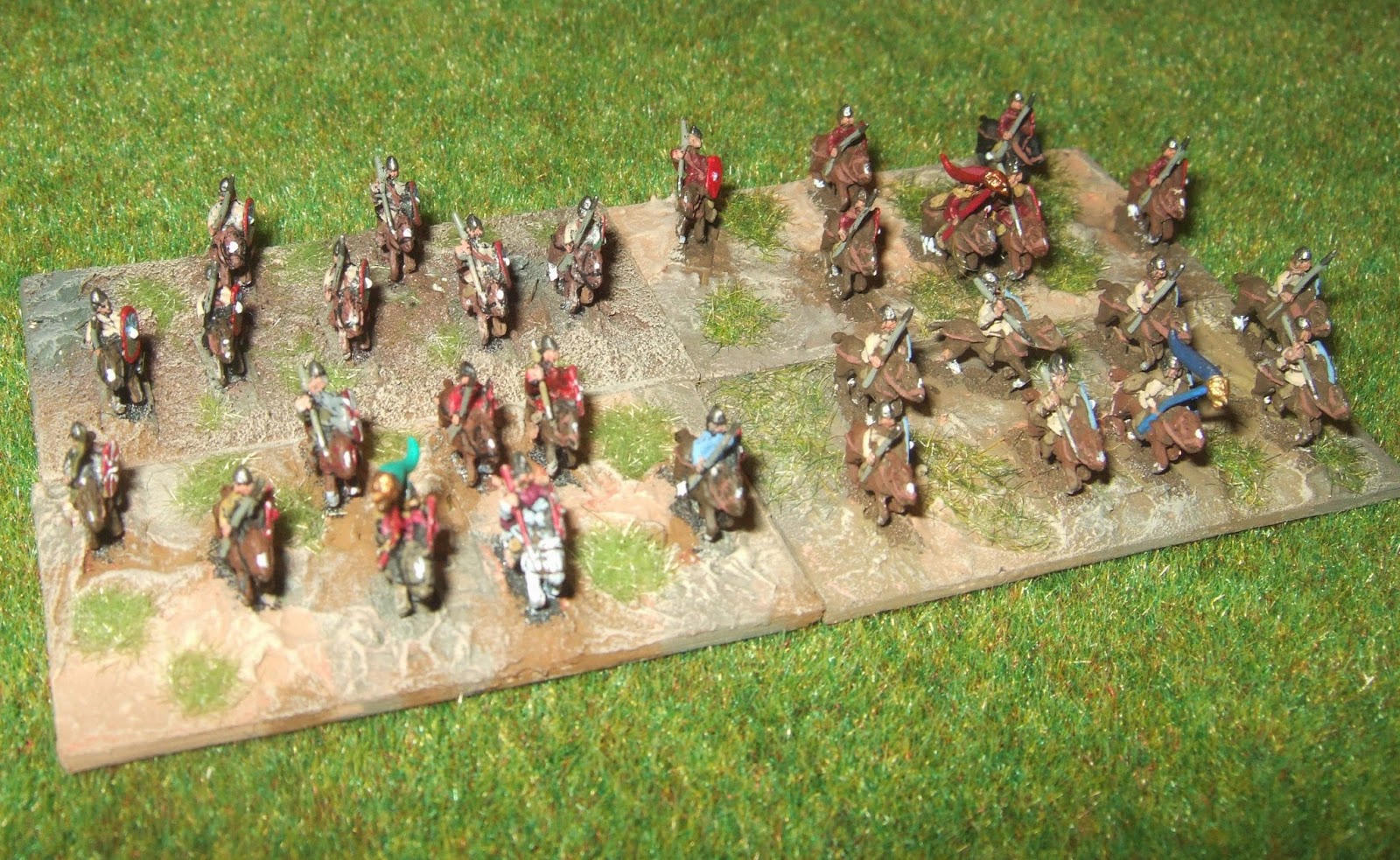 All the elements are on 60x30mm bases and used with the Basic Impetus rules.  There's enough to be going on with here, especially with the Irregular Miniatures figures I use as Franks and Goths.  There is a danger, though, that Mr Berry may yet tempt me to buy some cataphracts and Hunnic foederati!
Posted by Counterpane at 2:14 AM 8 comments:

More progress on my block of Andreivian shops... 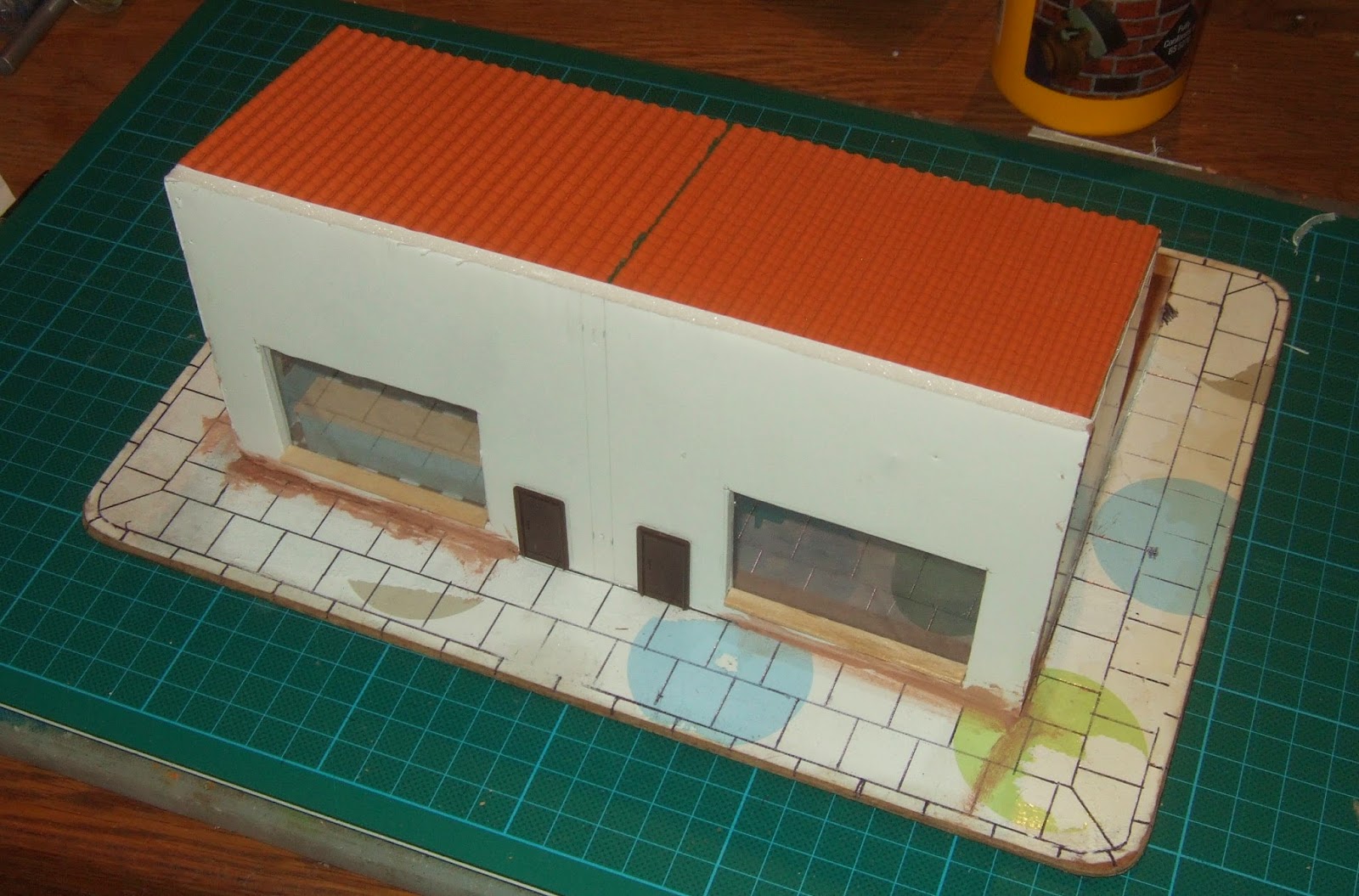 Now added the tiled roof and filled in with Green Stuff the gaps between the sheets of textured plasticard. 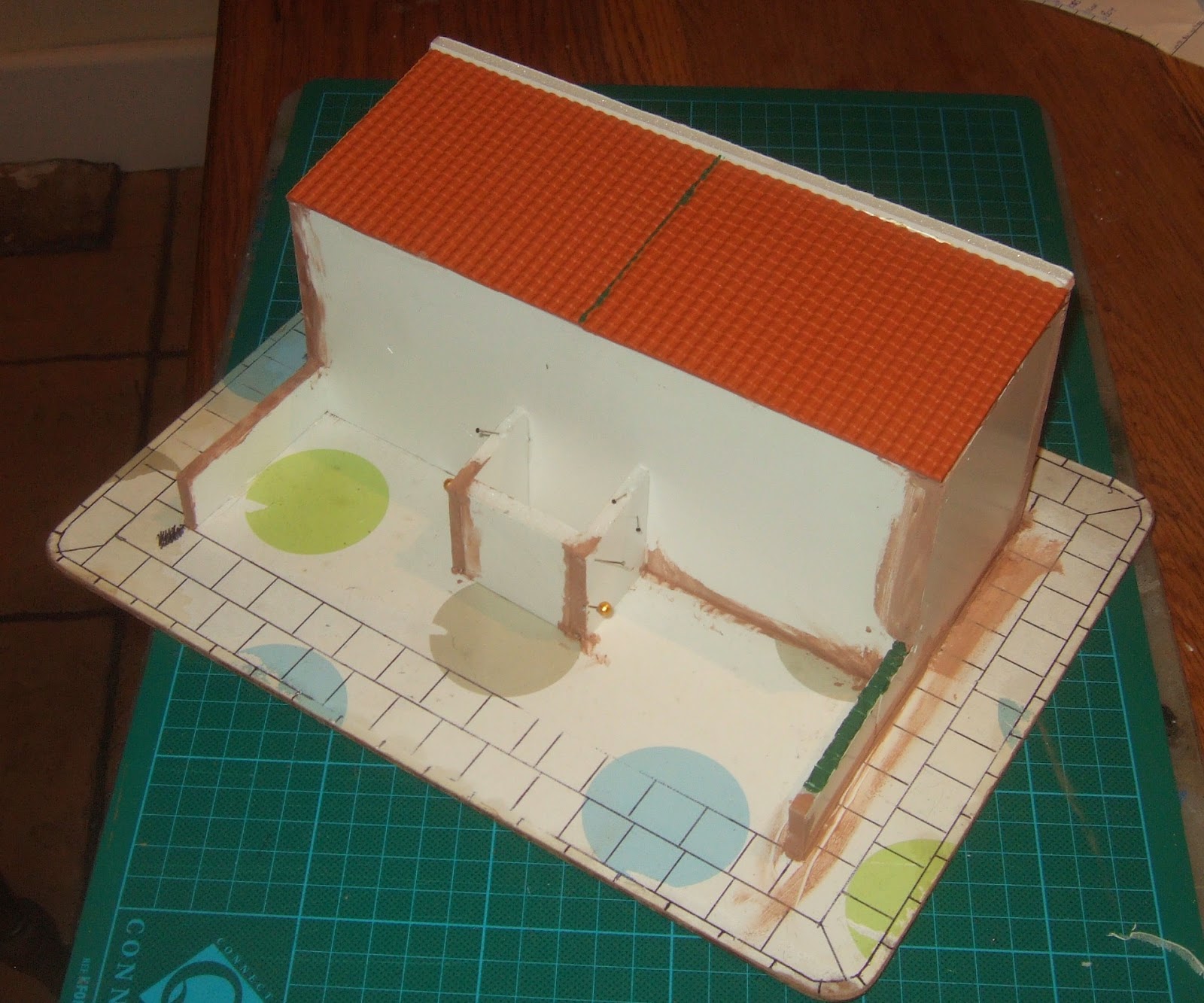 And started the small lean-to at the rear.  I used the spare Green Stuff to make coping stones for part of the wall around the back yard.  I've also used brown tile grout to start filling gaps and disguising exposed foamier edges (I forgot to do my usual process of rebating the corners). 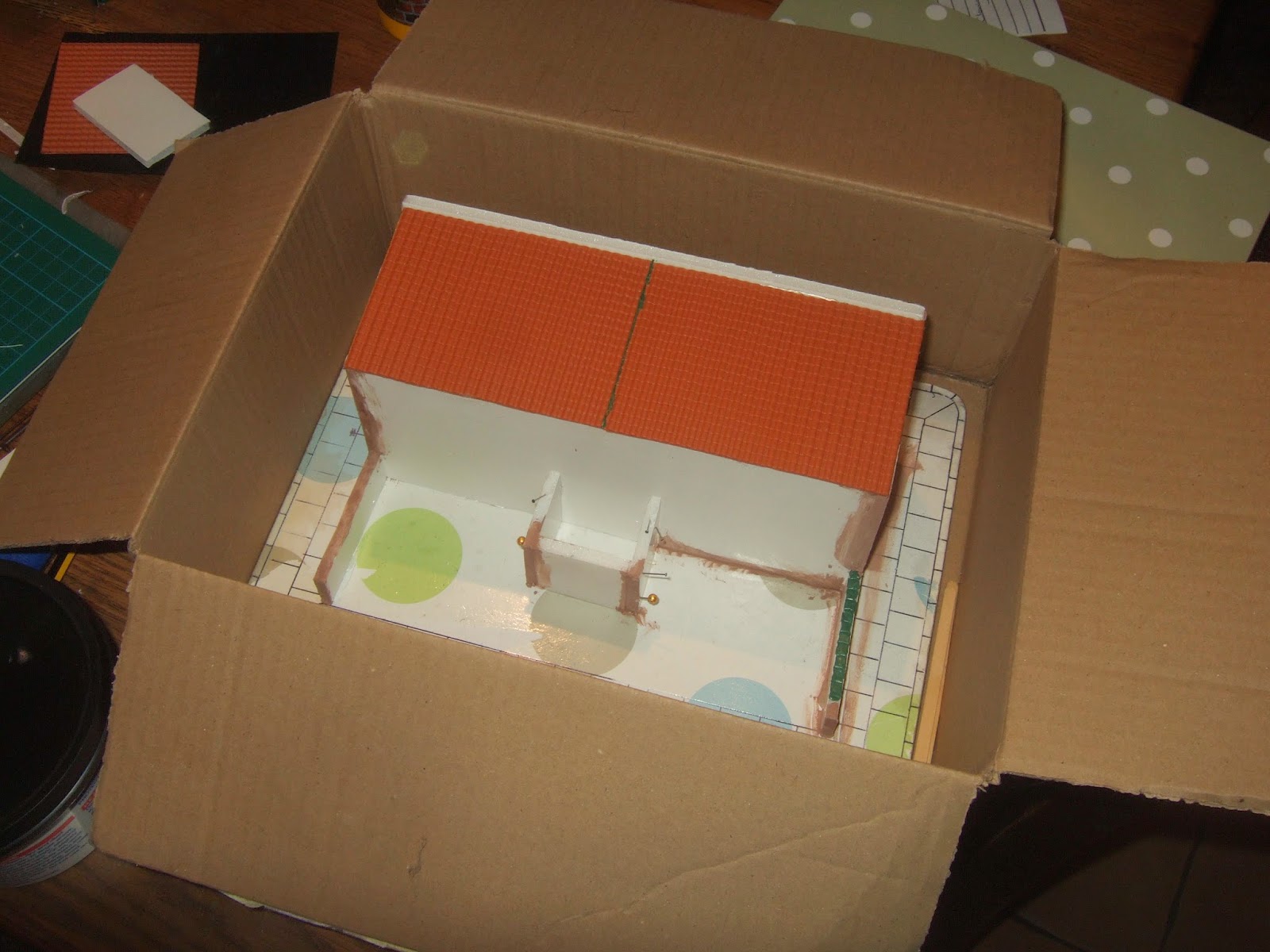 And finally, just a check that the whole thing is going to fit my chosen storage box.

Posted by Counterpane at 2:44 PM No comments:

A Message to My Readers

I know it's probably a forlorn hope but does anyone have knocking around the crew figures from the Airfix Stephenson's Rocket kit?  They would be very useful for a project Jamie and I have planned for June this year.

I'm happy to buy or trade.  I'll even take he whole kit off your hands if the price isn't too silly.
Posted by Counterpane at 11:52 PM 3 comments:

One of the advantages of having my birthday fall very close to Vapnartak is that I get to choose my own presents.  This year I got... 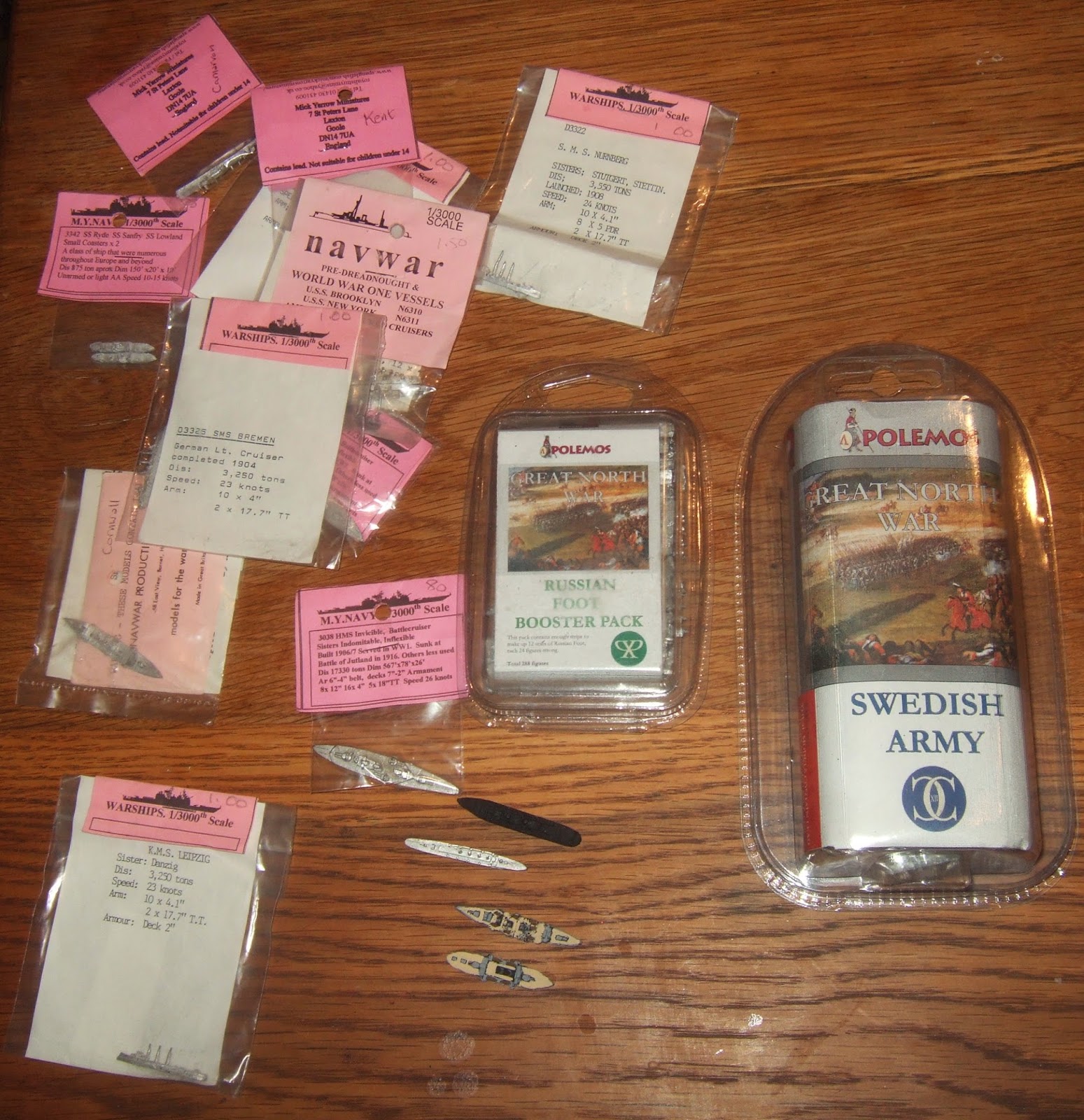 From Jamie, enough 1/3000th scale ships from Navwar and MY Miniatures to enable me to do the Battles of Coronel and the Falkland Islands.  You can see I've started painting a couple of them.  Close-up pics when I get them varnished and based.

From Stella, a Swedish Army pack from Baccus.  New opponents for my Great Northern War Russians.  Speaking of whom, I also got myself a sneaky present of a Russian Infantry booster pack. Now I'll have enough Russians to do nice, big battles with Black Powder.

Posted by Counterpane at 1:49 PM No comments:

A fair chunk of the remainder of my plastic Napoleonics collection is the result of an ancient magazine article.  I think it may have been in Airfix Magazine and it was about converting the limited Airfix range into other Napoleonic troop types.  I remember painting British infantry as Portuguese, converting British Grenadiers into Austrians, and transplanting shako heads onto British Hussars, again to make Austrians.  However, those all went in trade to another gamer sometime in the dim, distant past.

All that remained was a few attempts to make Nassau grenadiers by transplanting the heads of British Hussars onto the bodies of French infantry.... 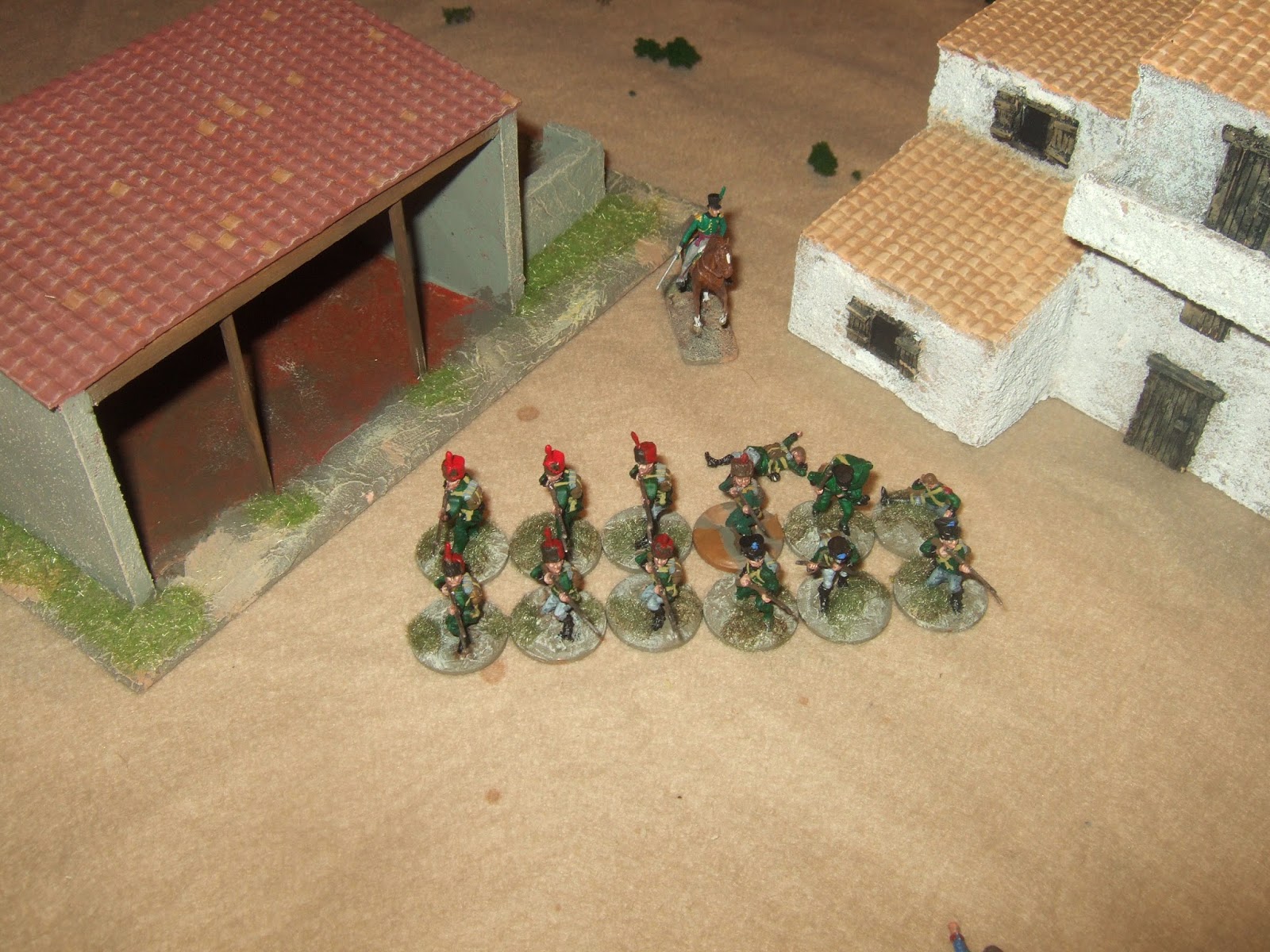 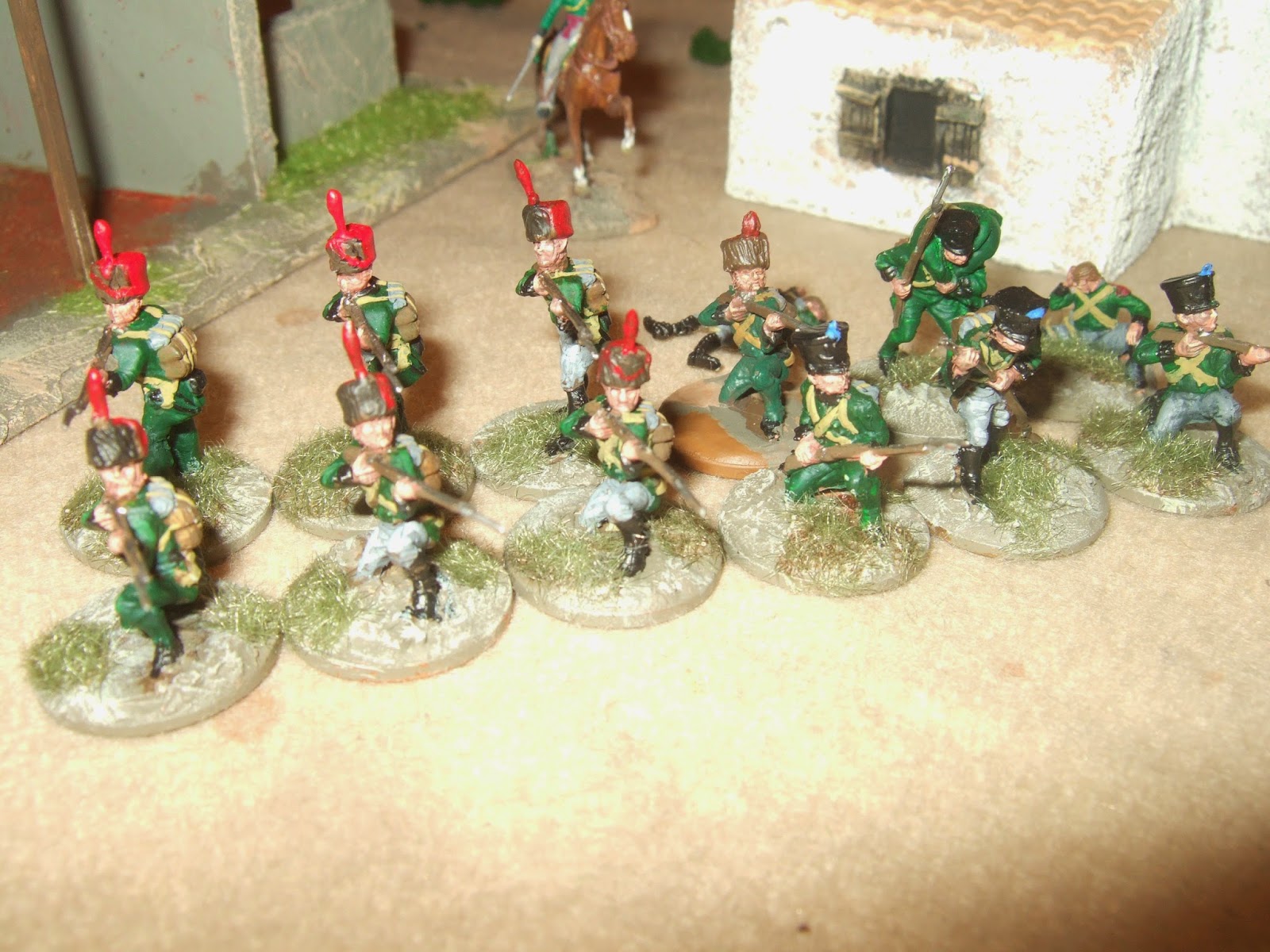 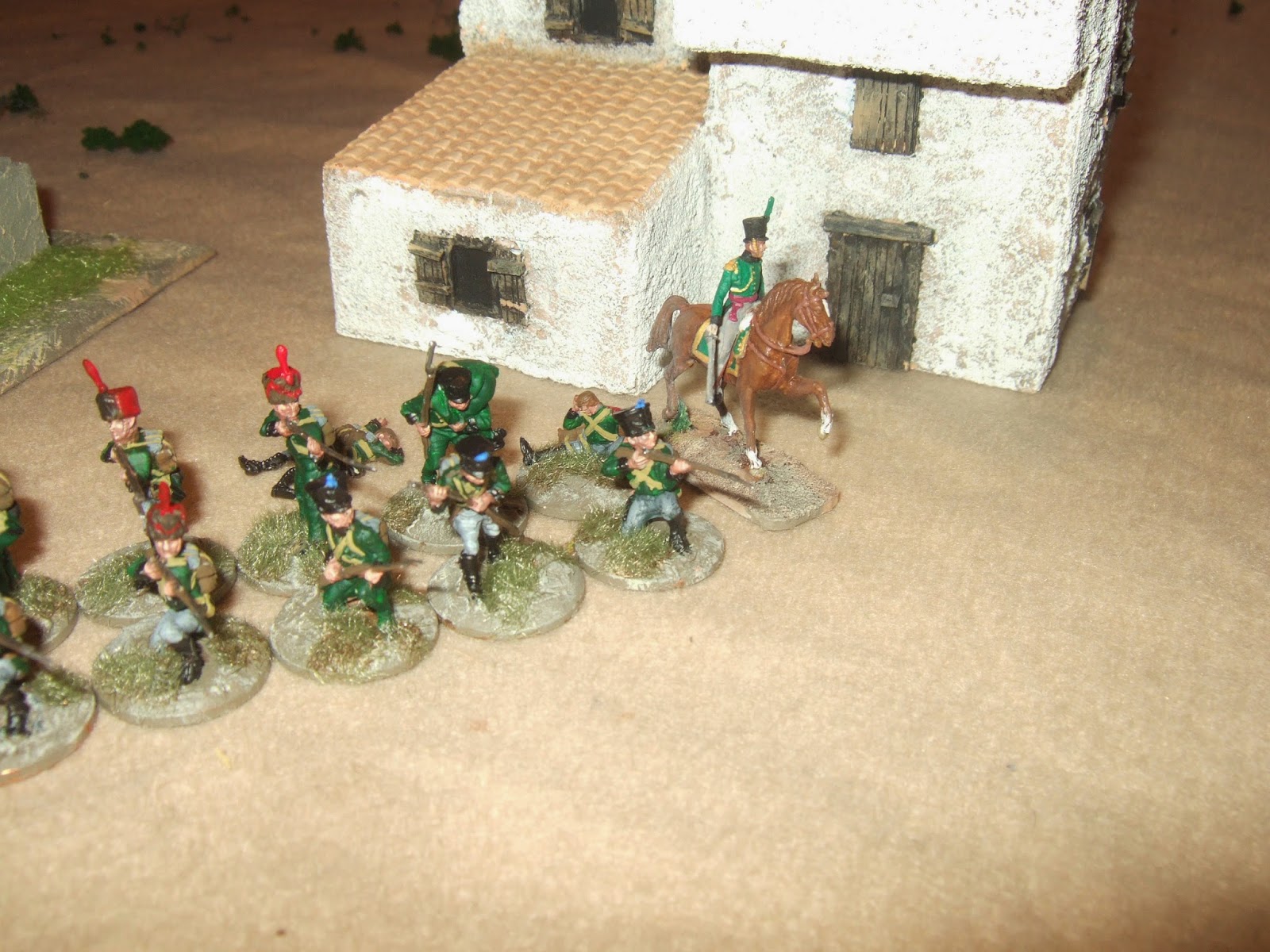 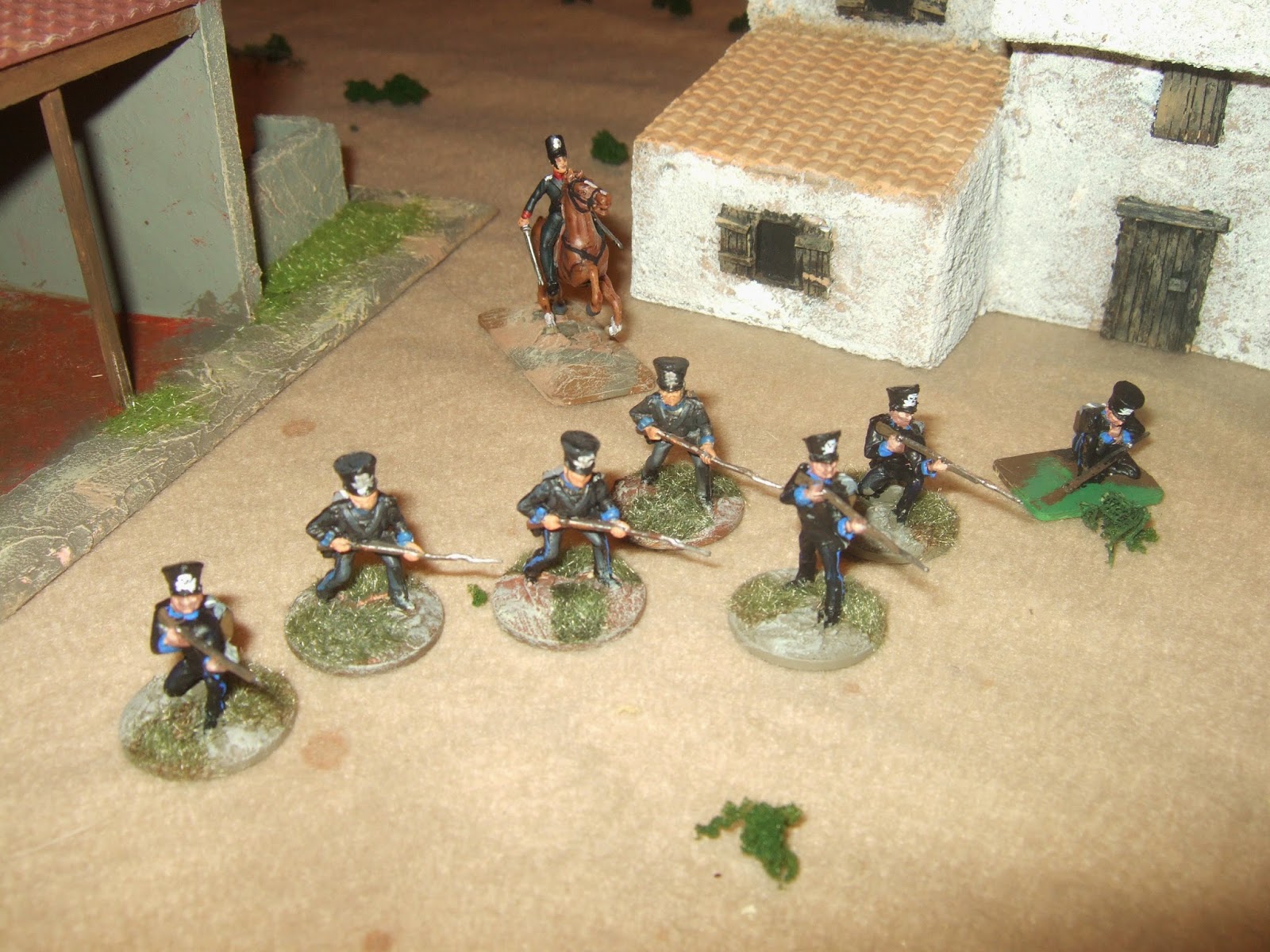 The Mounted officer is one that came in a batch from either Geoff Taylor or Tim Gow.  I'm not sure it's meant to be a Brunswicker but it looks OK with these guys. 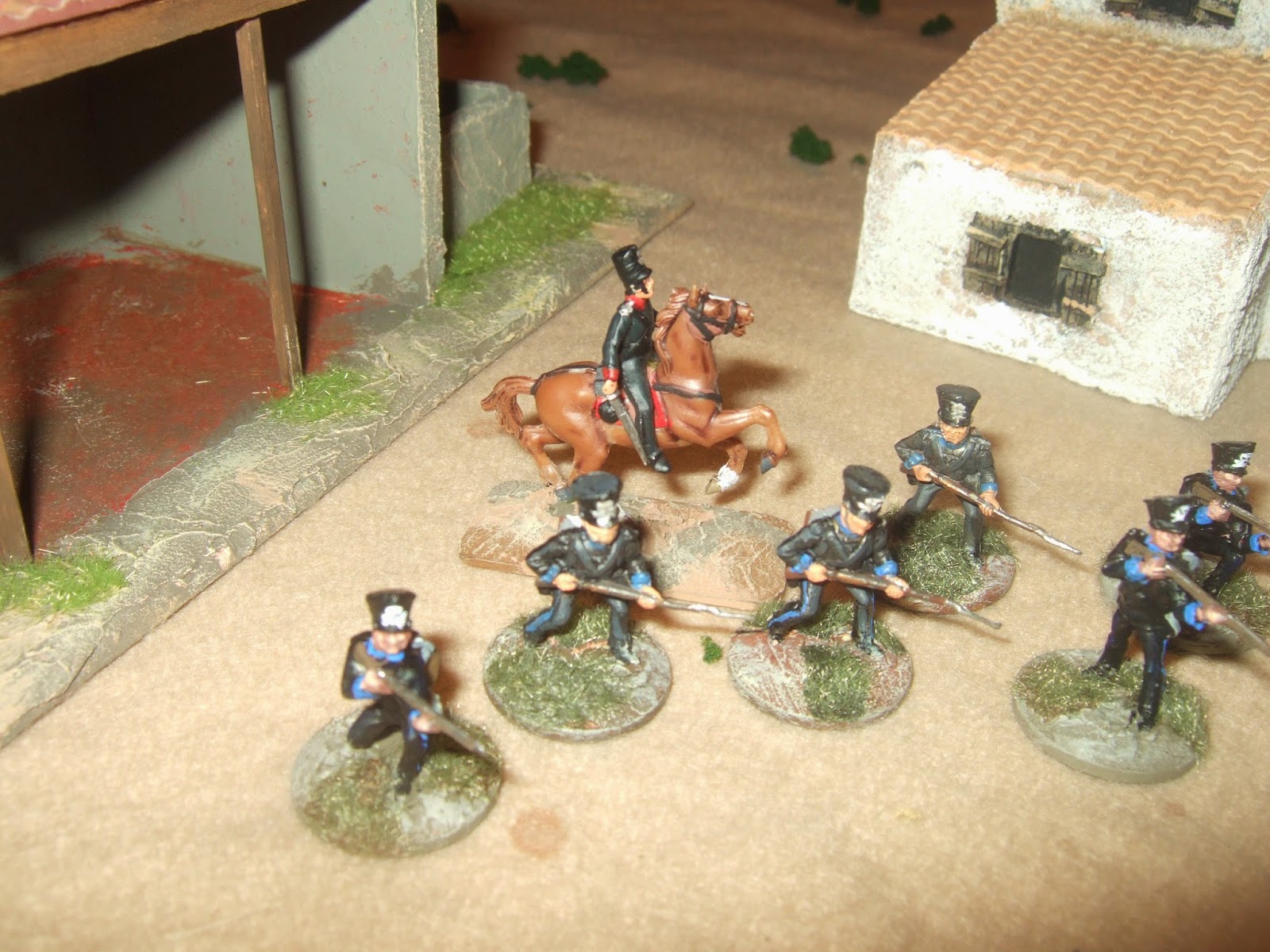 In an ideal world you could do a complete circle of head swaps British Hussar > French Infantry > British Infantry but I'm yet to find a use for a British Hussar with a Belgic shako head.  Probably just as well as the Airfix Hussar horses were a bugger for falling over at the slightest opportunity and their  reed-thin fetlocks were dreadful for flaking off paint.

Last up are a few Spanish guerrillas from HaT: 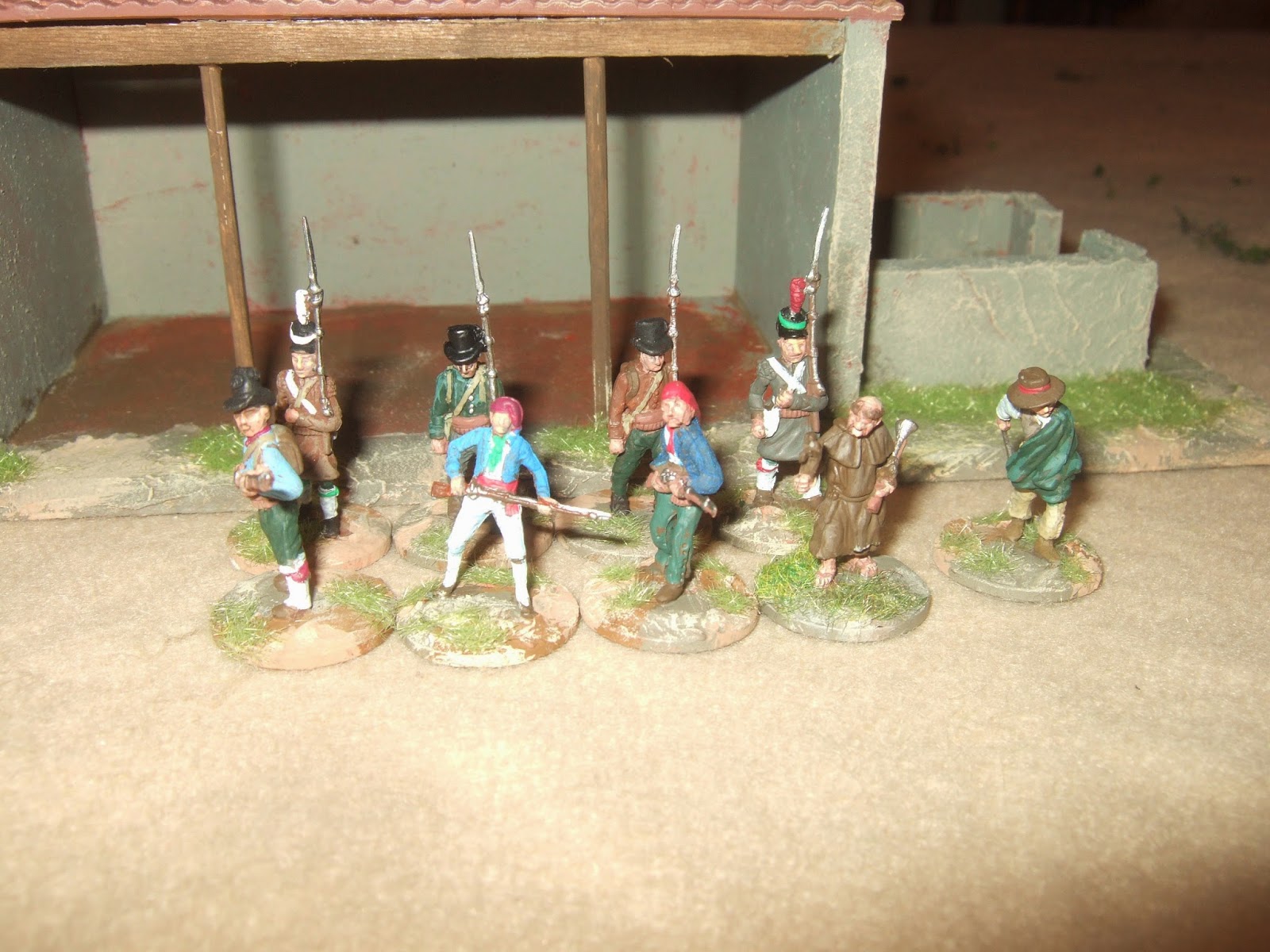 Not very good figures, but a rare source of armed civilians.

My Brits for Sharp practice are a similar mix of ancient Airfix figures collected in my youth and more recent examples from the modern explosion of 20mm plastics. 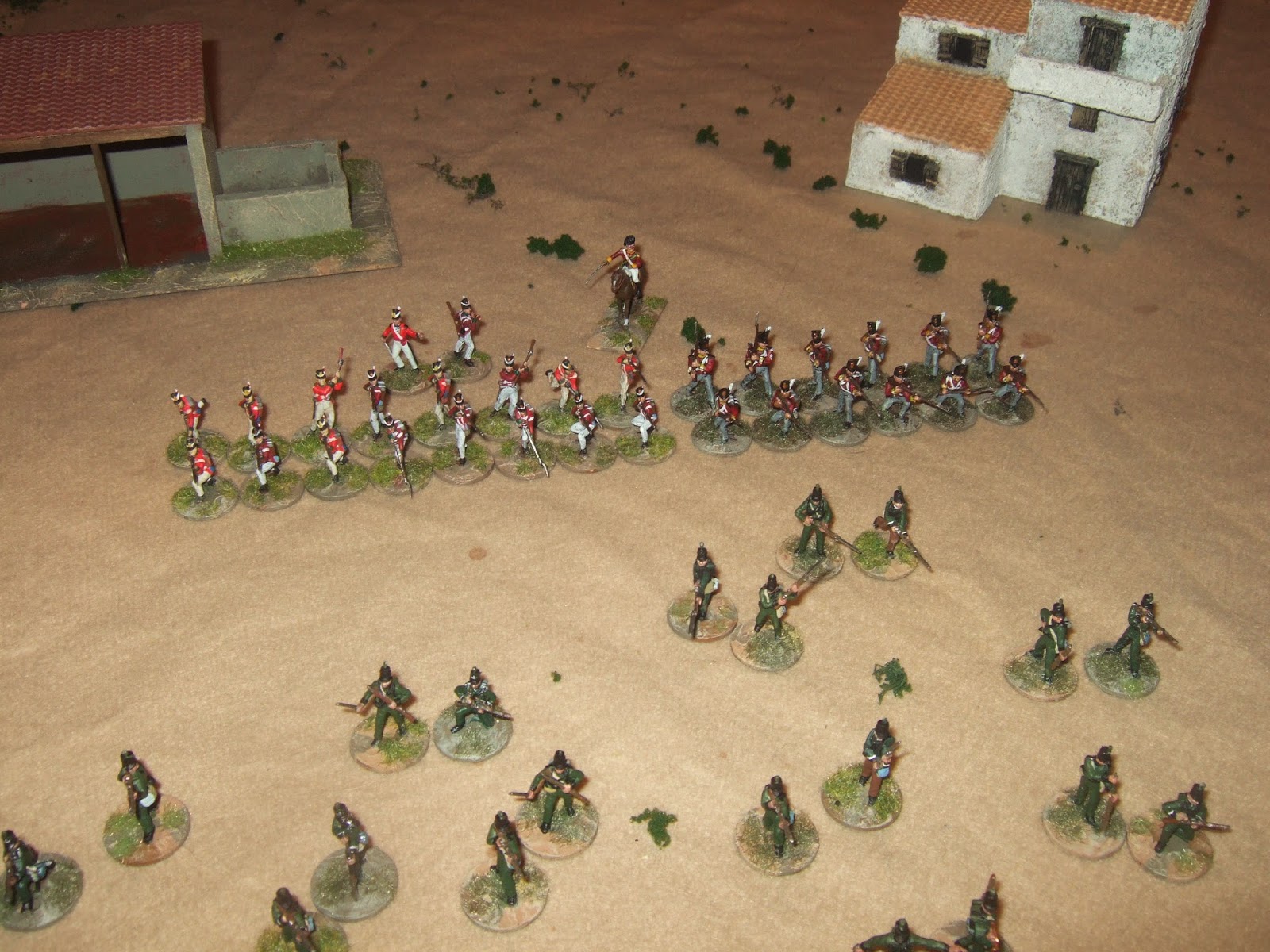 No cavalry yet but there are some generic light dragoon types on my workbench at the moment who are likely to become the 6th Light Dragoons.

The line infantry feature some earlier types (Esci/Italeri I think) in white trousers and stovepipe shakoes. 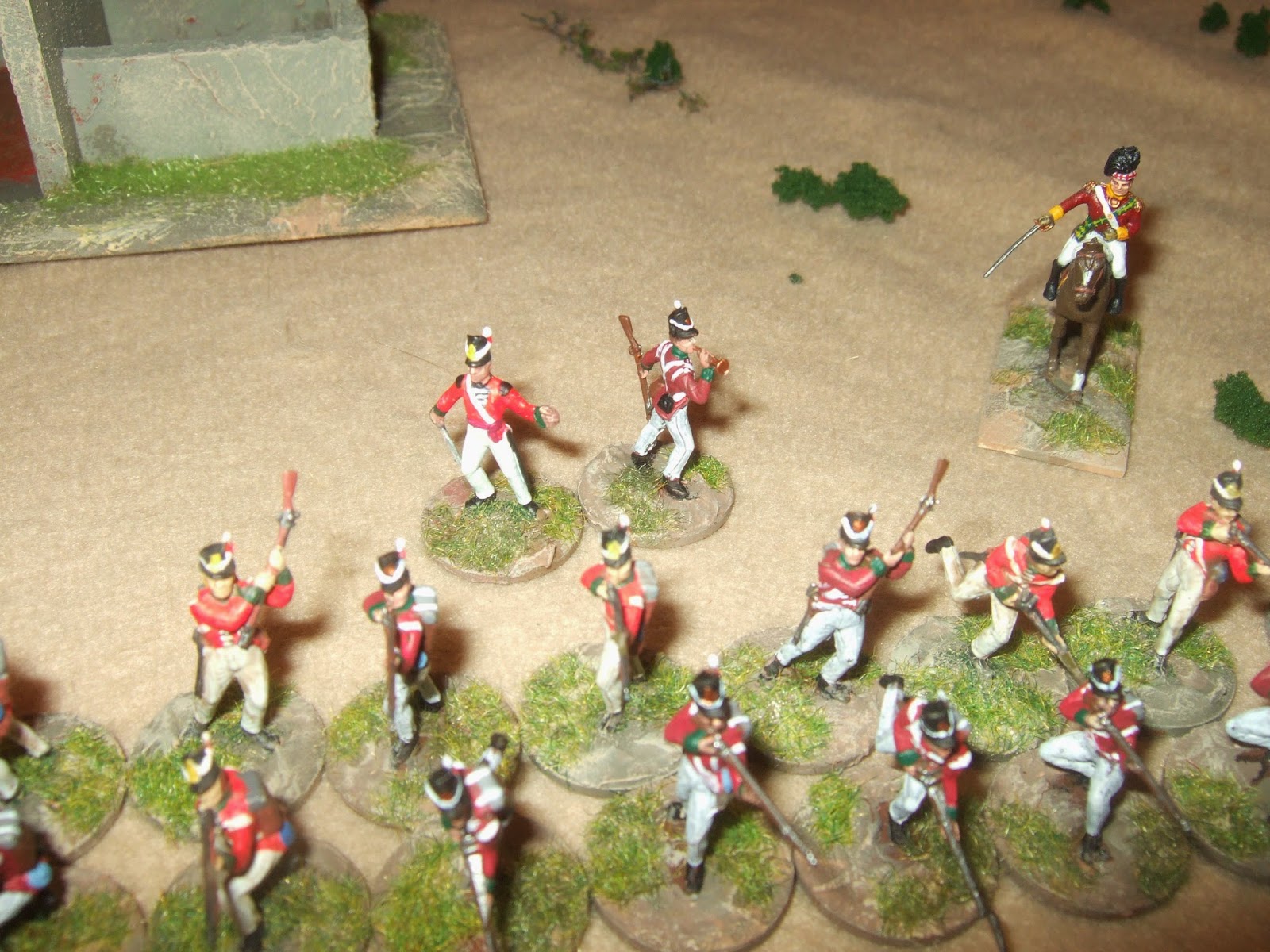 I was given these by fellow-wargamer Geoff Taylor.  Some were already painted and others I've done to boost the size of the unit.  Uniform basing means that the different painting styles aren't too intrusive.

The Airfix guys have the later Belgic shako and grey trousers.  Yellow facings help distinguish them from the green-faced brethren.

Also visible in this shot is Major Hector McLeod, the mounted officer from the old Airfix Highlanders box. 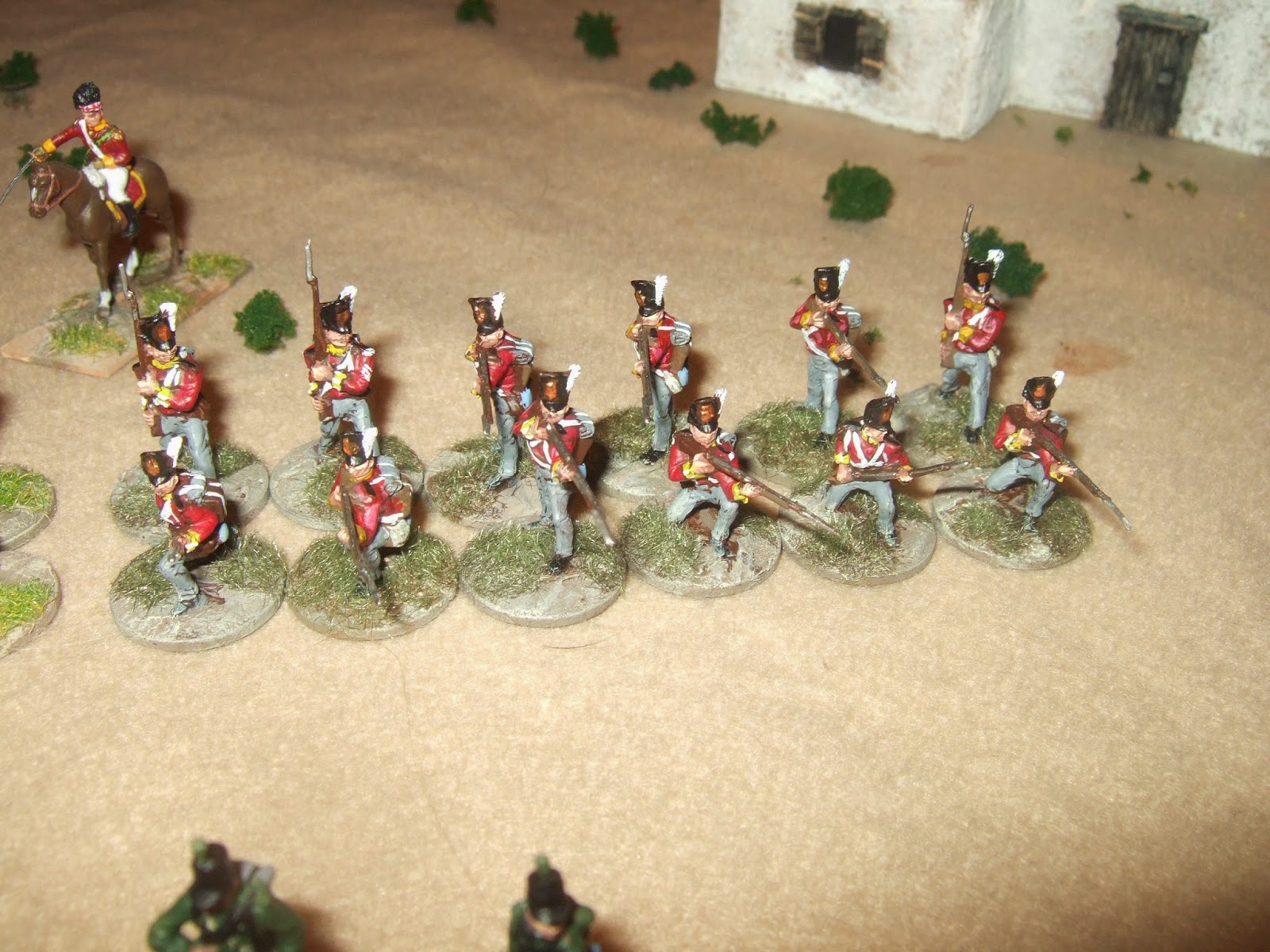 Then we have the obligatory 95th Rifles.  You can't have a British Napoleonic skirmish force without Rifles. 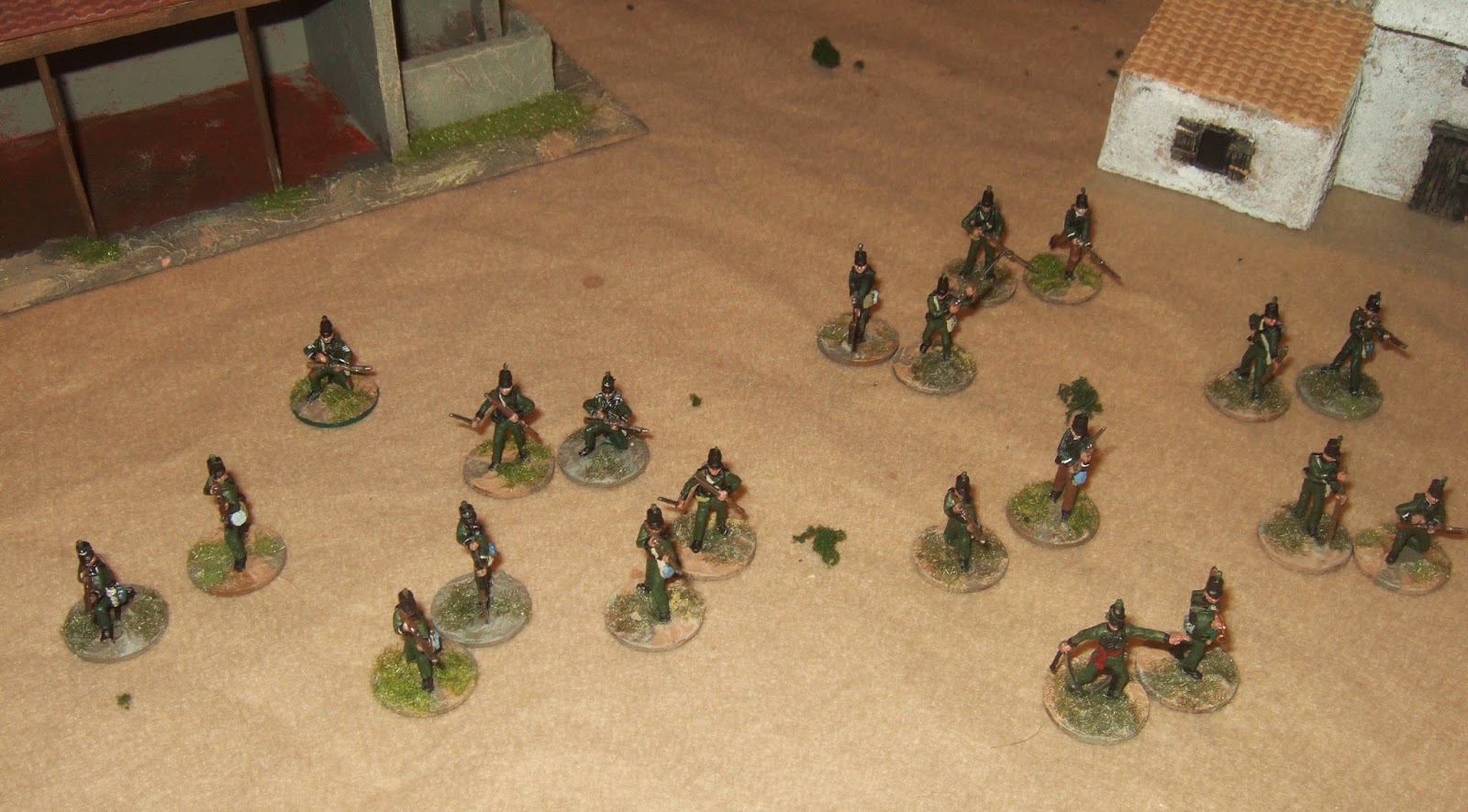 These guys are from the very nice box made by Revell.  I'll be keeping an eye out though for a pair of 20mm figures more suitable for Sharpe and Harper. 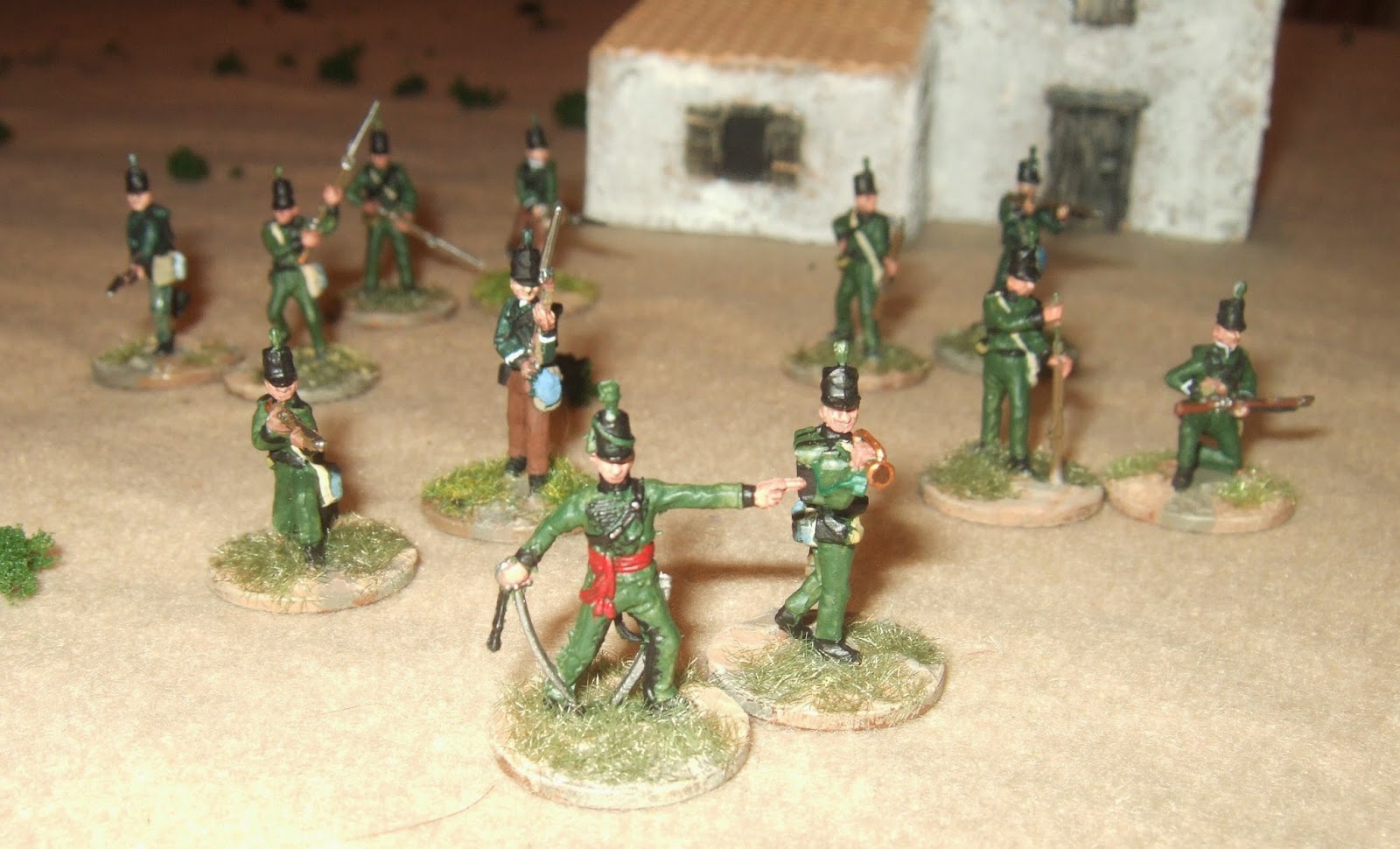 That'll do for now.  Next time the various other odds and sods that complete my collection.

I thought I'd have a go at laying out the troops I've gradually amassed to play Sharp Practice in 20mm scale.  Sharp Practice is quite a large skirmish game and to get the best out of it you need several tens of suitable figures.

My aim has been to build up forces primarily aimed at actions set during the Peninsular War.  The French are from a mixture of manufacturers - Airfix, HaT, Zvezda, Revell and Italeri.  A far cry from my early days in wargaming when there was only Airfix in this scale! 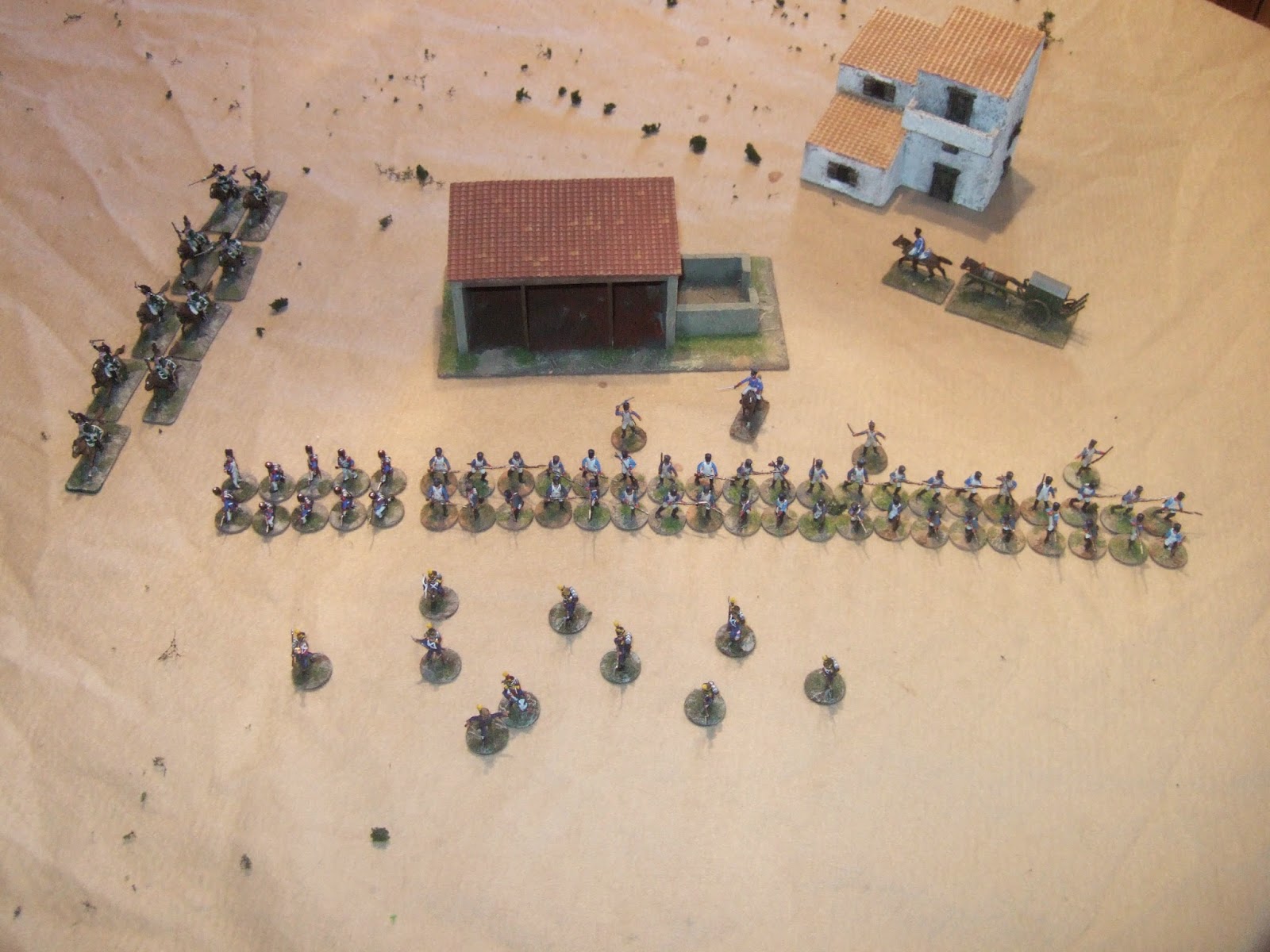 The fusiliers are by Italeri.  I have 40 plus a couple of dismounted leaders.  There's also a mounted officer from the excellent box set Napoleonic Mounted Line Officers 1813/15 by the confusingly named company Waterloo 1815. 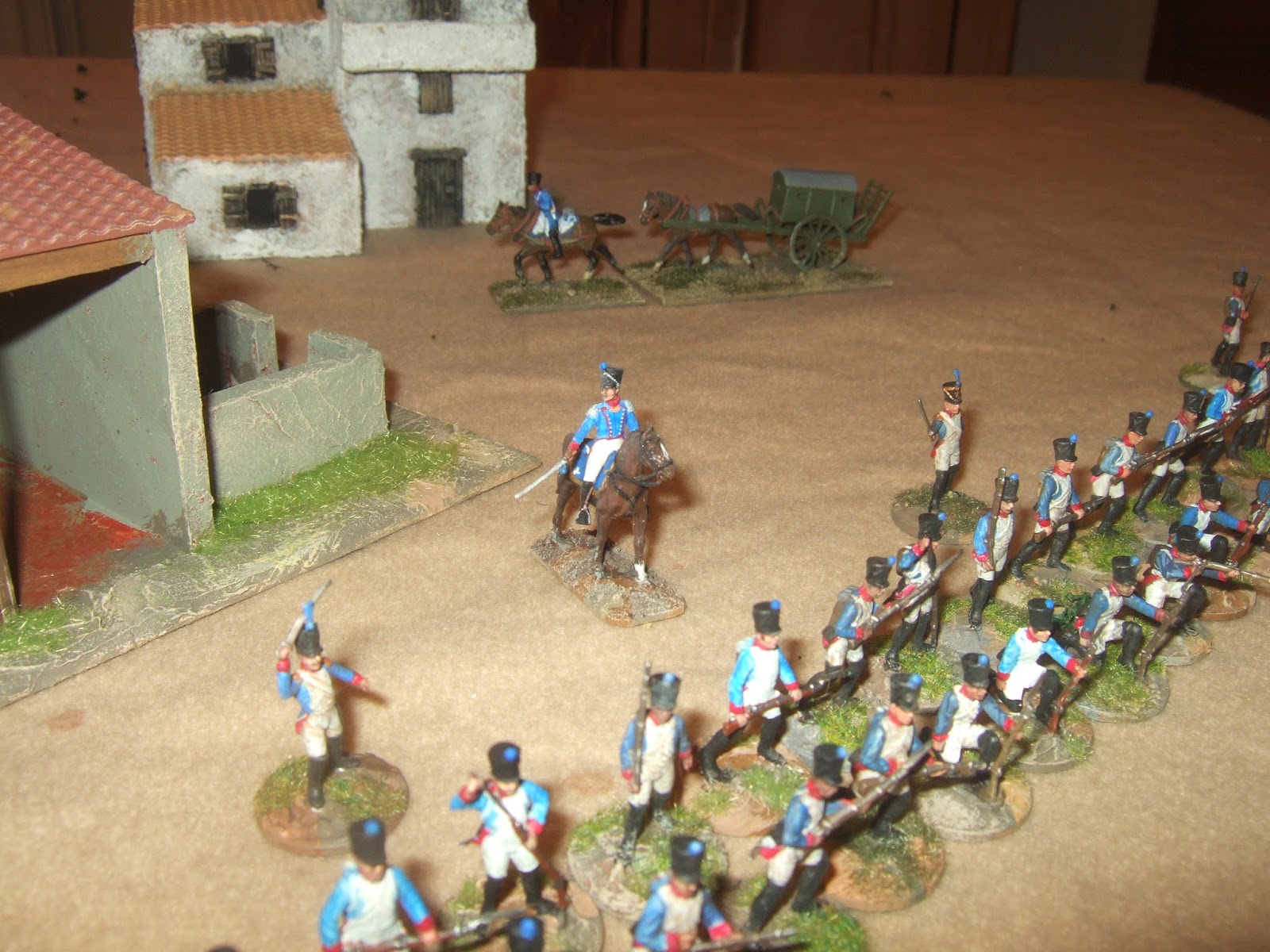 At the right hand end of the line is a group of ten grenadiers.  These are old Airfix Imperial Guard types I've hid lying around since I was a kid.  I'm pretty sure the uniforms are wrong for line grenadiers but I'm so far from button counting in this project. 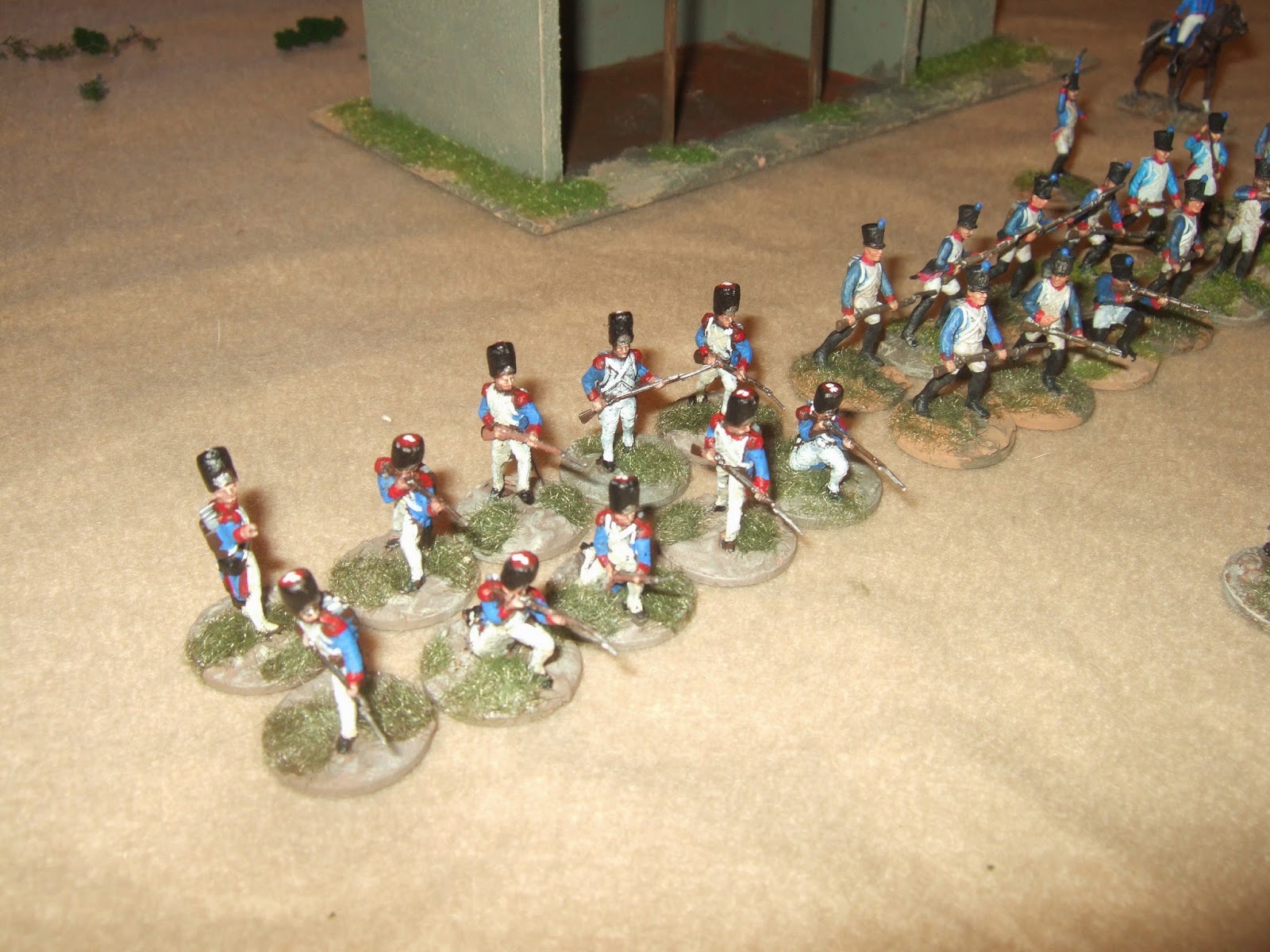 Up front, there's a swarm (well a small swarm) of voltigeurs.  These guys are obviously from a light infantry regiment (blue breeches) and are rather over-dressed with their full plumes.  They do look pretty though so I'll keep using them.  They represent about a third of a box from Zvezda.  One day I'll get around to painting and basing the rest. 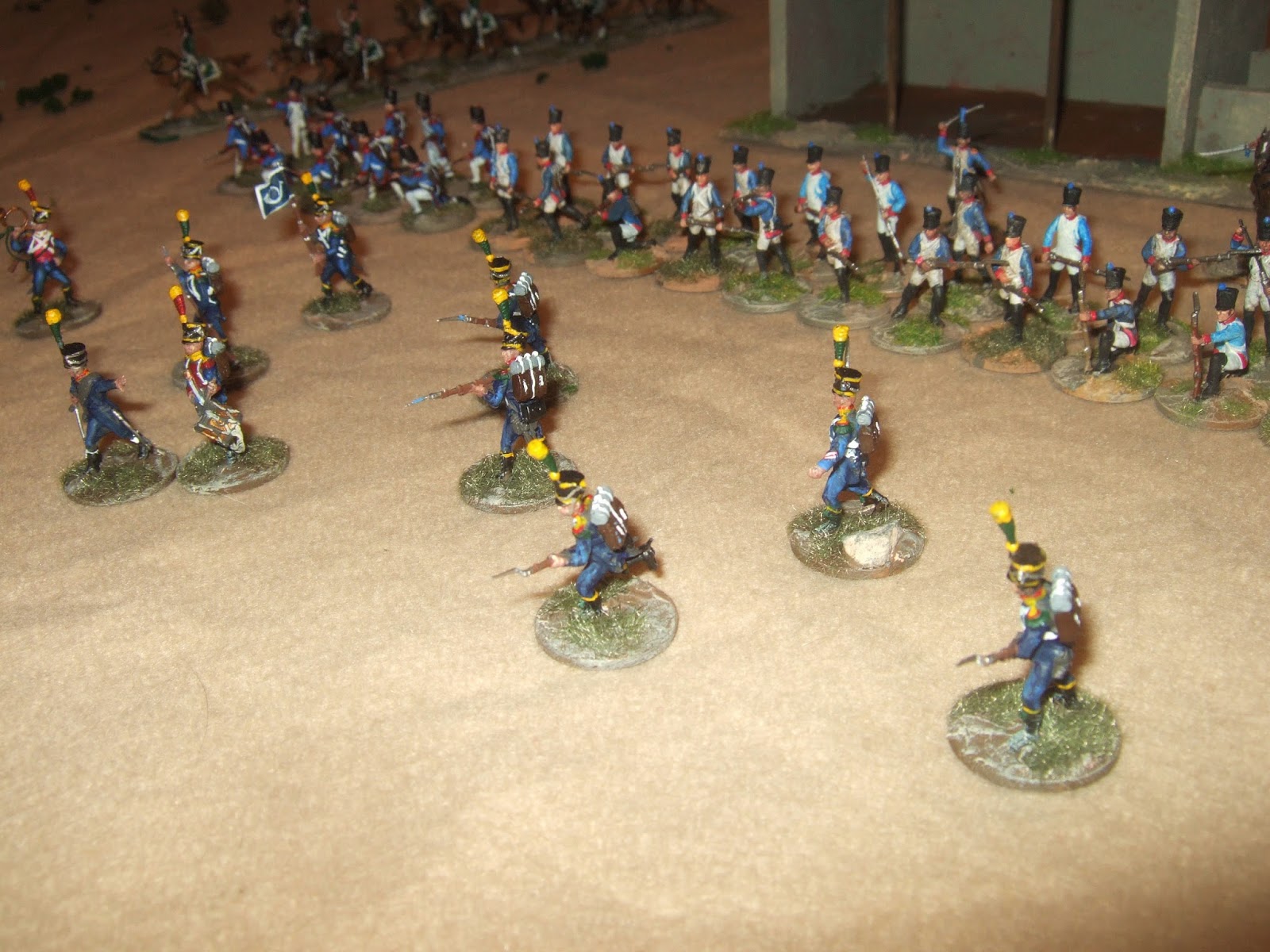 At present, my mounted element is limited to these Revell dragoons.  About half a box this time.  There'll be more if I can ever motivate myself to paint them.  I hate painting horses. 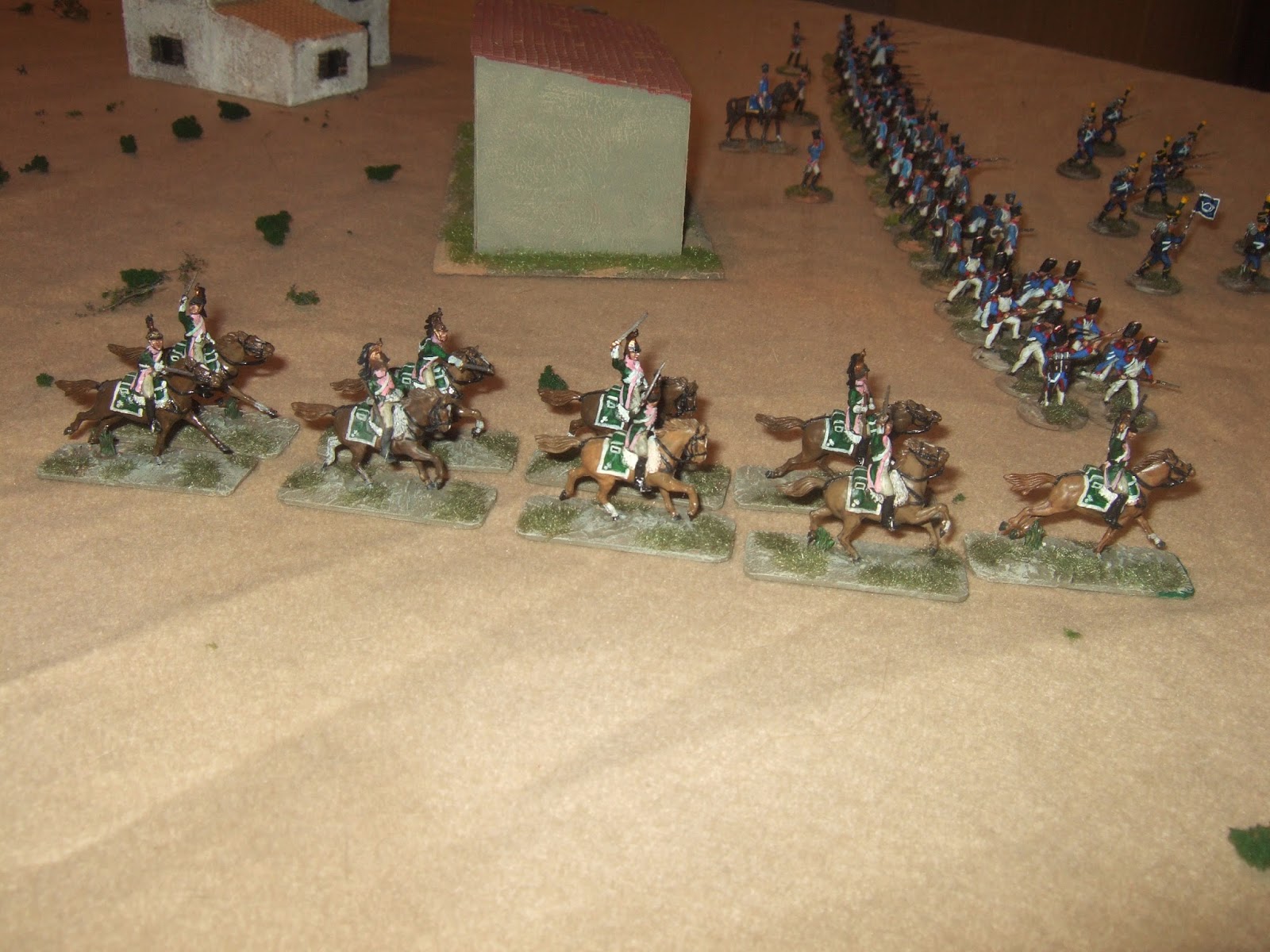 Some plastics manufacturer does a box containing some dismounted dragoons.  I keep my eye out at shows but haven't found one yet. 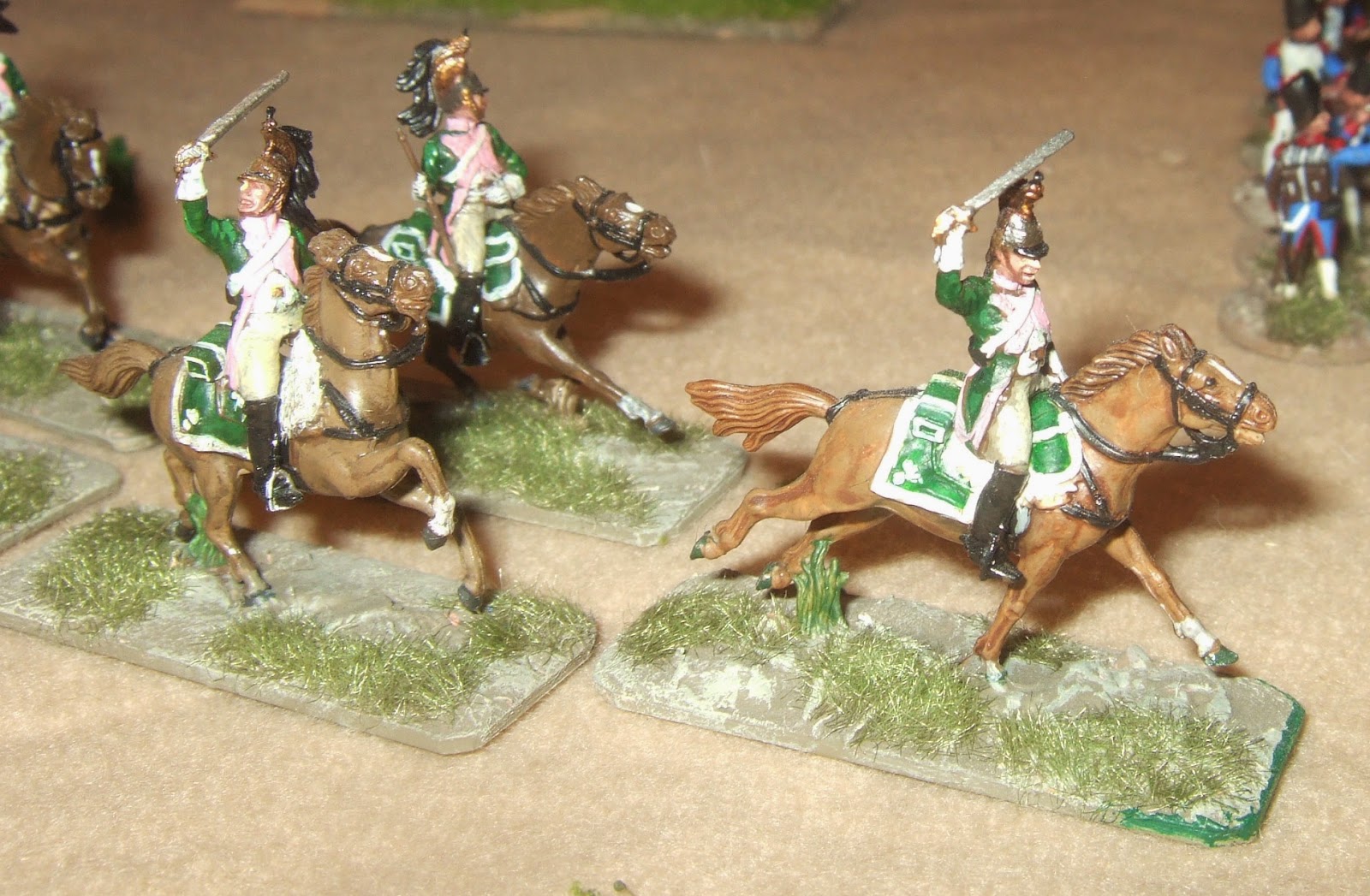 Finally for the French, we have one of M. Larrey's ambulances.  In the provision of vehicles to remove wounded troops form the field, the French were better served than any other nation in the wars.  This one comes from a set of two manufactured by HaT. 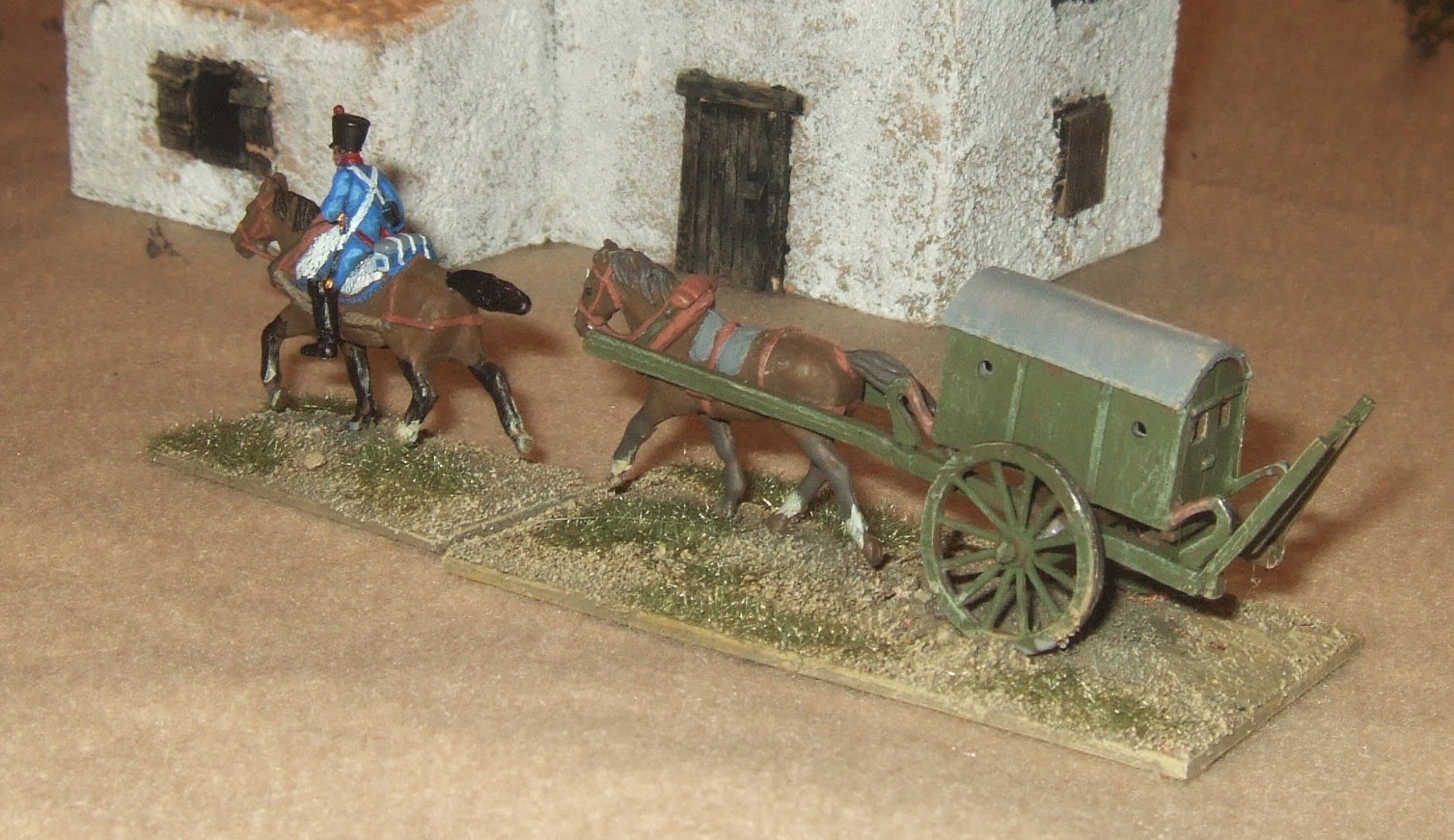 All in all I'm pleased with these.  Being 20mm they can use the terrain pieces I already have for more modern games.  I've also been less tempted to make each one an individual masterpiece, which in 28mm would have slowed things considerably.

With Jamie being in York now a family trip there on Vapnartak Sunday made every sense.  With my birthday falling a week later it was even a chance to choose my own presents!

The only pictures I took were of this rather attractive War of the Spanish Succession set up. 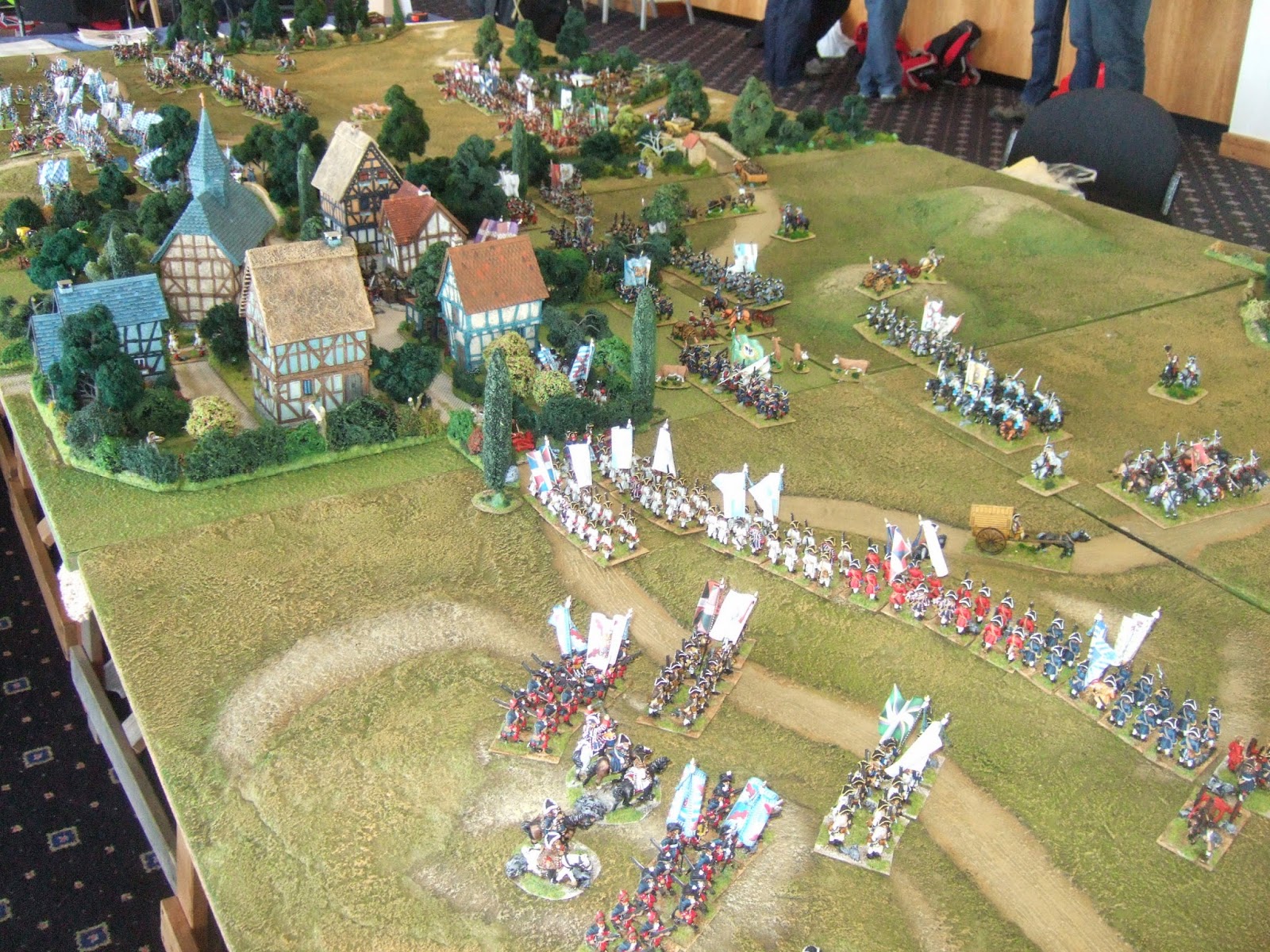 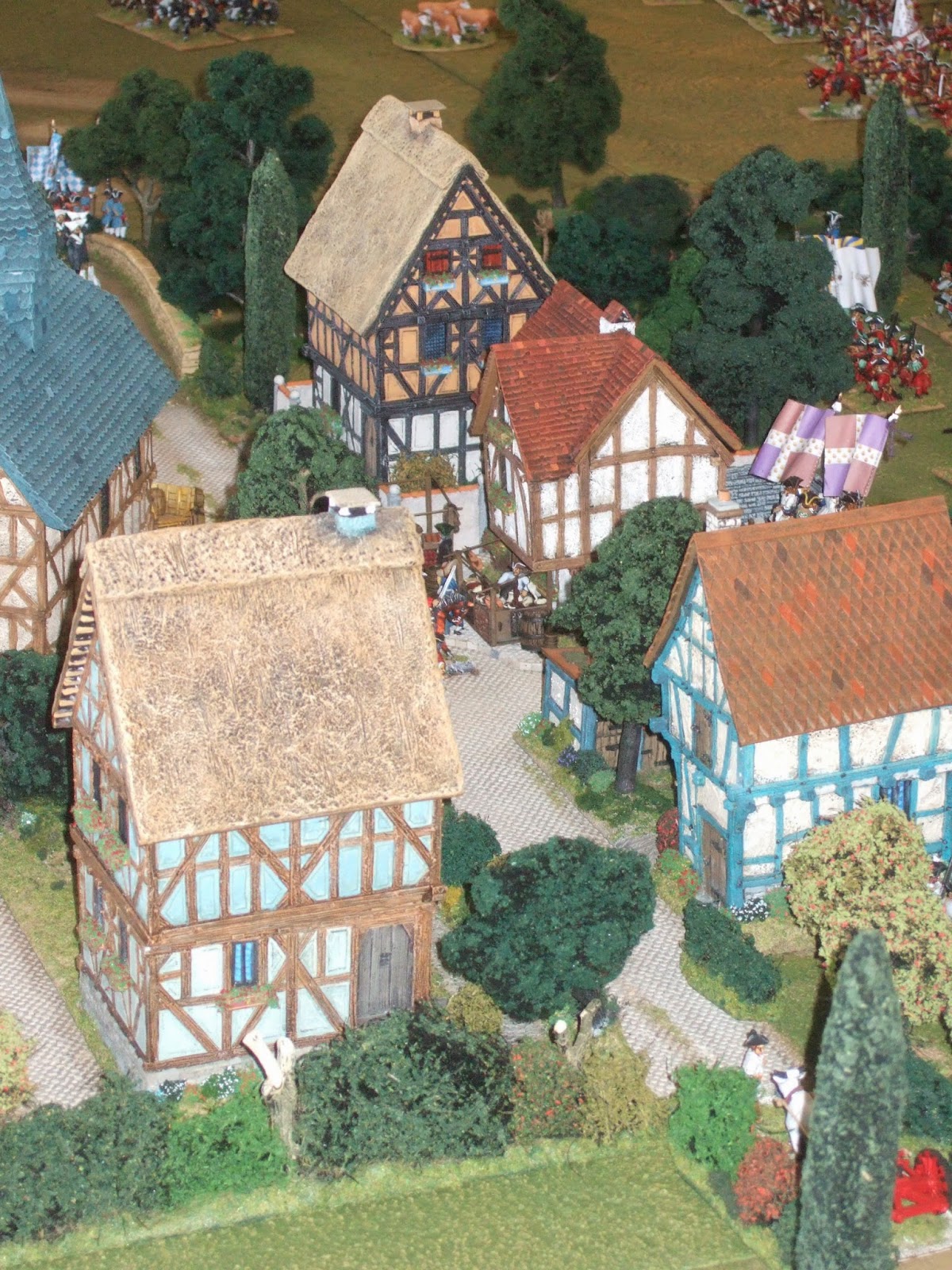 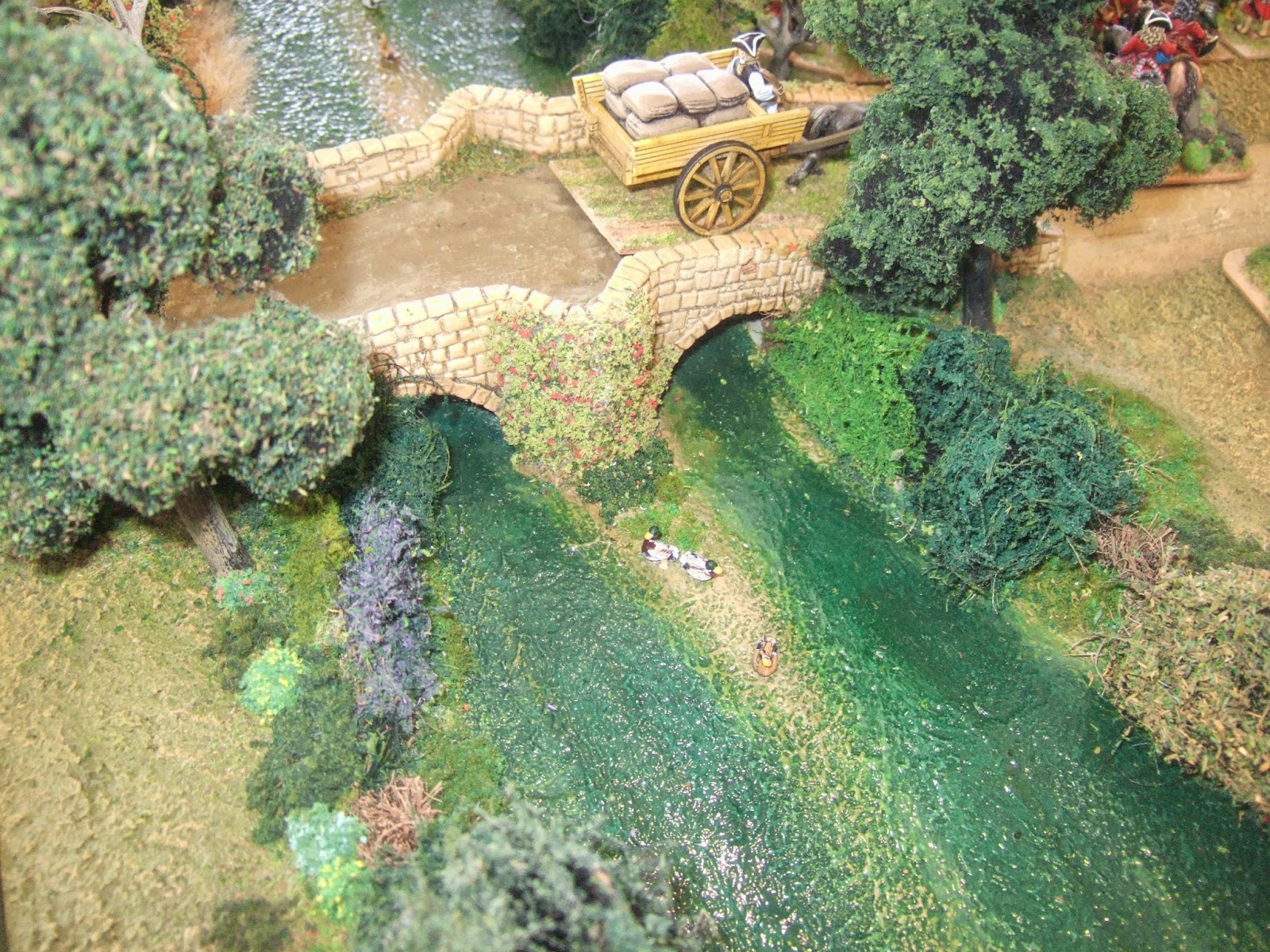 So what am I getting for my birthday?  Well, let's just say that my GNW Russians will soon have some Swedish opponents.  Oh and I'll be doing the battles of Coronel and the Falkland Islands (1914) in 1/3000th scale before too long.

I also picked up a box of assorted plastic figures including the old Airfix Wagon Train set  for something under £2.50!

Posted by Counterpane at 11:49 AM No comments: