Having had another go at 19th century Principles of War, I decided to try out the 18th century set with my early-1700s Russians and Turks.  The following pictures show scenes from a solo practice battle that's currently set up on the plan chest in my gaming room.

Although I've spent most of the last 72 hours playing with my new huge box of plastic figures, I have managed to get a few more 6mm models painted.

These guys are all Irregular Miniatures - one the left a unit of Franks and on the right some Roman bolt throwers.

I'd acquired the Bolt throwers and their crew years ago as part of a load of second-hand models and having no plans at the time to get into Romans I'd pinched a couple of the crew figures for other purposes.  One ended up as a peasant giving directions to a GNW Russian general, whilst another now serves as a Bektashi Dervish in the rear of an Ottoman Turkish unit!

I therefore had to bulk out this unit with some of the generic Dark Ages types that also see service as Franks.  Chi-Rho monograms give the shields a suitably Late Roman look. 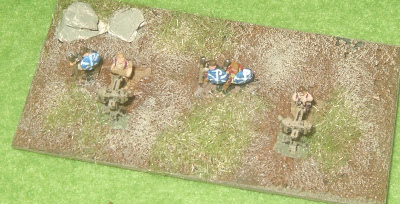 The Franks can serves as wild invaders of the Empire or as semi-tamed Foederati.  These are painted based on notes in Armies and Enemies of Imperial Rome - striped tunics, green cloaks with red edging, blonde hair, and shields in segmented patterns.  They carry a mixture of axes and spears.

Yesterday I became the latest custodian of this: 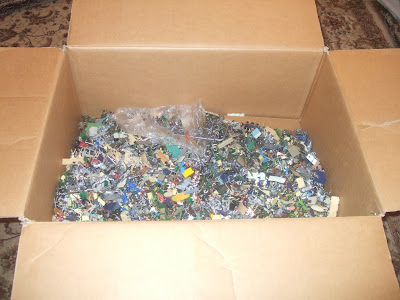 It's a box of, I estimate conservatively, 2,000 mostly plastic figures that Tim Gow obtained from Mark Hydes.  Tim's had his pick and passed it on and I shall do likewise.  I might even add some figures to it before I do so.

So far I've managed to extract enough Airfix French Foreign Legion types to allow me to finish my Rommel's Route  To Verdun project.  There's also a pile of sixty-odd British colonial types that will go nicely with my existing collection for playing scenarios based on TT Jeans's The Gun Runners.

More reports later as I make my way through the pile!
Posted by Counterpane at 11:50 PM 3 comments:

Having all of my June Saturdays earmarked for visits to universities with the twins I was keen to use Father's Day as an excuse to play a wargame.  Andy and Rob came over and we had another go at 19th century Principles of War.

Again, we used my (mostly Irregular Miniatures, 6mm scale) Franco-Prussian War minis in the guise of those venerable enemies the Vereinigte Freie Städte and the Grand Duchy of Lorraine. This time the VFS were allied with the Prunklanders (who look a lot like Bavarians). As the story tells it:

Following an ill-judged declaration of war by Grand Duke Albert of Lorraine, the Grand Duchy has been invaded by the forces of the Vereinigte Freie Städte and their Prunklander allies.
A VFS army under Feldmarschall von Frinck has laid siege to the city of Syrah and is bombarding it from siege battery positions spread around the outskirts.  Lorraine’s Army of the East is trapped within the walls of Syrah.

Meanwhile, a small Lorrainer army under the Vicomte de Froufrou has evaded encircling VFS forces and is now marching towards Syrah.  Lacking the strength to engage the whole VFS army, Froufrou plans to launch a swift attack on the besieging units to the west of the city thus creating a weak point through which the Army of the East can launch a breakout.

A grand siege battery sits beside the St Coutarde road, west of Syrah.  A brigade of Prunklanders guards the rear of the guns.  It is here that General de Froufrou’s hammer-blow will fall.  Other VFS forces must march towards the sounds of battle if they are to save the day.

This photo shops the battlefield before the action started.  Ignore the cardboard markers in the foreground; they were just there to demonstrate the various formations on movement bases used in POW.

Rob, as General Pinzl, took charge of the Prunklanders and Andy took the role of General the Vicomte de Froufrou.  I planned to bring on the VFS main forces subject to a die roll but in the end they only arrived at the very end of the battle - too late to make any difference.

The scenario gave me an opportunity to use my Irregular miniatures Prussian siege gun (albeit only as an objective marker).

A cluster of farm buildings in the centre of the table would prove the focal point of the battle with Froufrou launching his main attack at that point and General Pinzl's Prunkland forces maneuvering to oppose them there.

The fight in the centre and on the Lorraine right was tense.  Several units were forced back temporarily (I later discovered we'd been playing the rule wrong as regards how far a unit "retires shaken") before returning to the fray.


In the end Andy was able to advance his right flank forces across the St Coutarde road.  Rob had only artillery and one regiment of Chevaulegers protecting that flank.  When the latter were routed by Chassepot fire, Andy was able to push a battalion of infantry onto the hill, take the siege battery and win the game.  The arrival of VFS infantry on the opposite flank was too late to influence the result.

We all agreed it had been a fun game and it was nice to have more time to play at a leisurely pace.

The rules stood up well but I've since discovered a few things I got wrong.  The movement rates table on the playsheet is particularly obscure but I've come up with a better way of laying it out that I shall use in future games.
Posted by Counterpane at 1:40 AM No comments:

Some more Baccus 6mm, this time based as skirmishers.  Again, impressionistic painting; don't look too close! 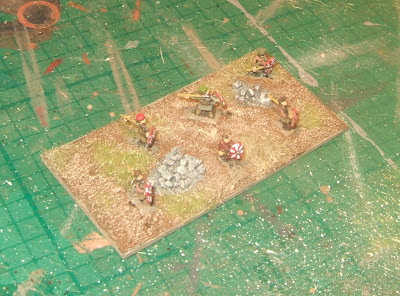 With these guys I've tried to capture a more ragged, militia look with a view to using them in later period games, say fifth century when the Empire is starting to go to hell in a hand-basket. 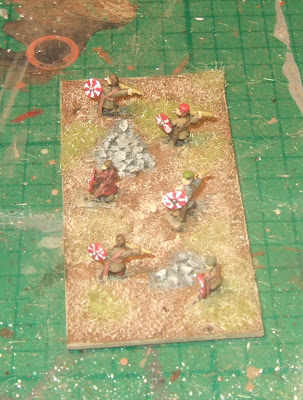 Posted by Counterpane at 2:24 PM No comments: