I've finally finished the Midlam Miniatures beastmen I bought at the Edinburgh show in August 2014.

I'm quite pleased with how they've come out.  They are a bit well equipped for feral Broo.  Maybe they are followers of Ralzakark or Lunar mercenaries.

They'll see action in a future game of Song of Blades and Heroes.
Posted by Counterpane at 6:28 AM 4 comments:

Battle at the Mansio

Edited to introduce an annotated picture of the battlefield at the end of the action.

Our latest game of To The Strongest! this weekend was a fictional affair that pitched Roman against Roman with Goths, Franks and Huns along for the ride.

The field of glory was largely flat with the most obvious feature being a Roman road and a mansio; a roadside inn of the kind used by long distance travellers and Imperial couriers. 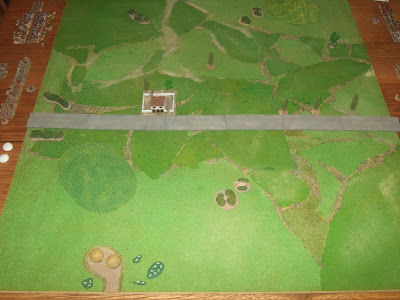 I try to always have a new terrain piece in every game and this time the mansio was it. 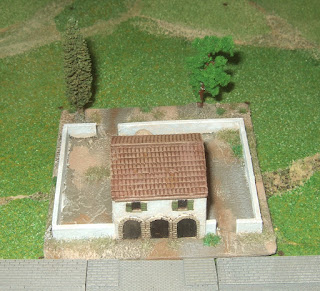 The building is a very slightly modified Leven Miniatures Mediterranean building (basically I just removed the drainpipes).   The walls and (not visible here) haystack and well in the rear yard are scratch built.

The Westerners advanced most aggressively.  In the photo below you can see that their line (on the right) has reached the Mansio.  The Roman infantry is this side of the mansio, beyond it is the Goth infantry, and beyond that the Goth horse.

On the eastern (left) side,  the Roman forces are again in the foreground, the Franks are just beyond the road, and the Huns are furthest from the camera. 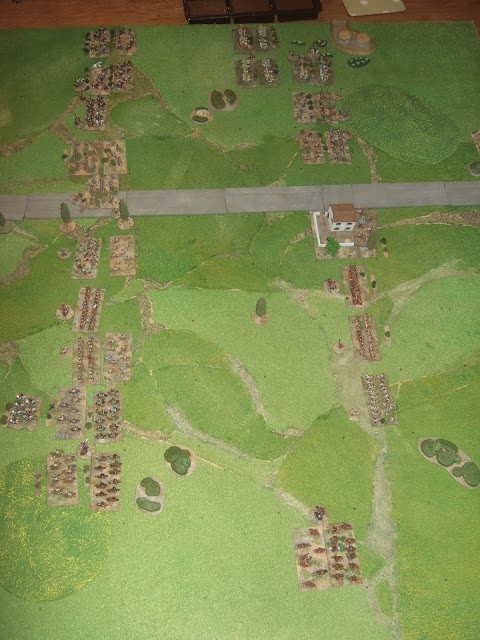 Both sides showed caution in the early stages, neither wanting to be caught off balance.

The heavier Goth horse were able to drive the Hun light cavalry before them and soon threatened the Eastern Romans' left flank. 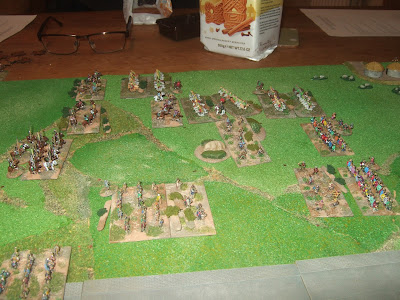 Meanwhile the Western Roman cavalry massed on the opposite flank. 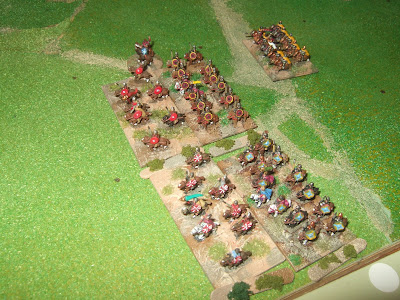 And were faced by their Eastern opposite numbers. 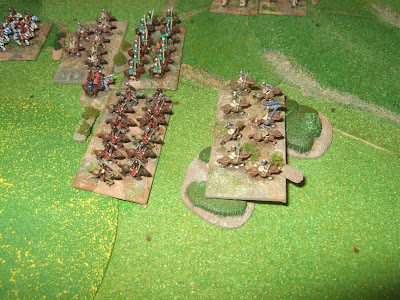 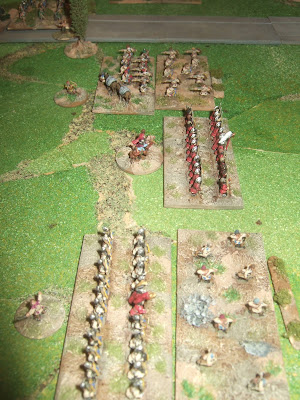 At the northern end of the field a fierce melee developed between the two Roman armies' cavalry commands.  Below we see that one of the Western (heavy) cavalry units has become disordered... 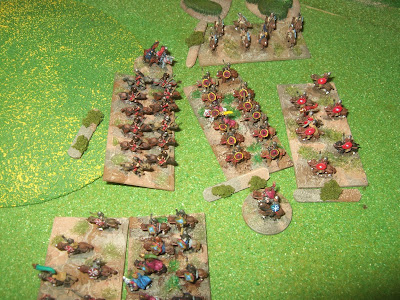 Meanwhile on the southern side, one of the Hun light cavalry units was about to be driven from the field. 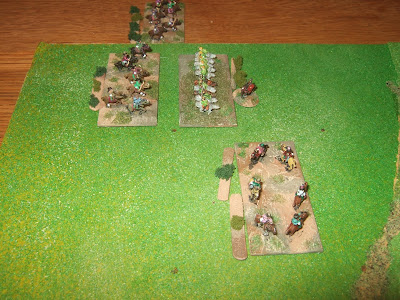 The Hun nobles charged in and disrupted the formation of one band of Goths. 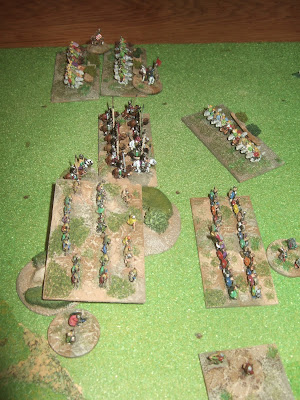 Both sides fell foul of the luck gods. Gus tried to his deep unit of Frankish warriors out of the bad going to charge a Goth shield wall but drew a one and then another when his General tried to keep the attack moving.  A minute or two later another one stopped the Hun nobles in their tracks. 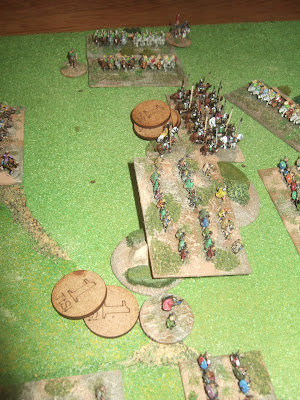 On both banks the Westerners threatened to swing in behind the flanks of their opponents but all the while the Easterners were inflicting a steady stream of casualties. 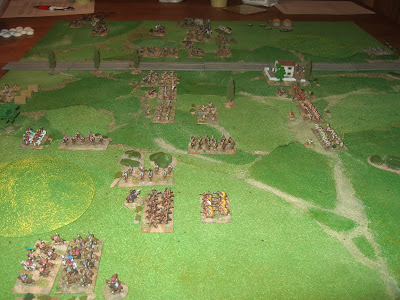 As more and more units became disordered (canted units in the pic below) it became easier to get kills.  Soon the Westerners were down to just three remaining victory medals whilst the easterners were on six or seven. 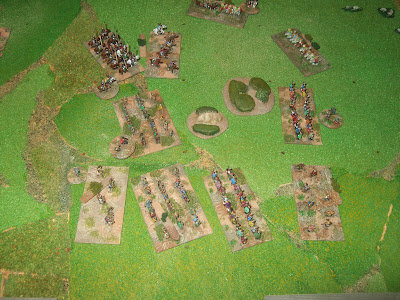 In the end we ran to of time to finish the battle.  When various commanders had to make their way back to their respective homes, we decided that night had fallen.  The Westerners had cavalry forces well advanced on both flanks (their forces are outlined in red below) and in a couple of turns could have made a dash for the easterners' camp.  On the other hand they had taken some serious casualties.  Losing a light unit and then having a General fail an unlucky save could have seen them beaten at any moment. 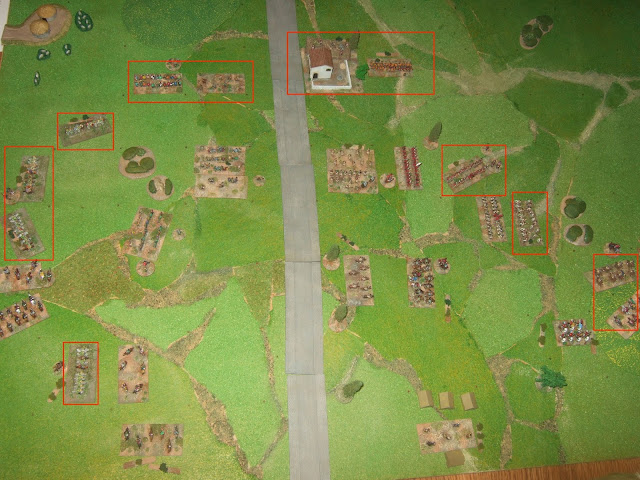 Posted by Counterpane at 3:59 PM 3 comments:

Having played a few games of To The Strongest with multiple players on each side, I decided I needed to invest in some more activation counters.  I contacted Simon Miller and he very kindly split the usual packs to sell me just what I needed; two lots of activation chits: 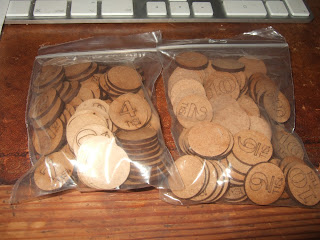 Being the fine chap he is, Simon also enclosed a bag of 10 disorder markers: 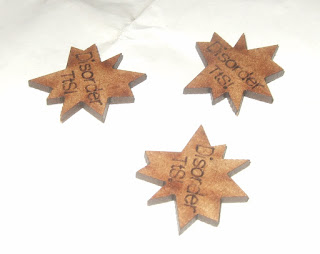 ... and most interesting of all, a sample of his new line in MDF bases. 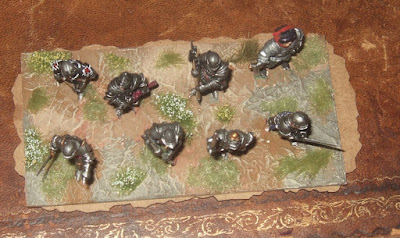 These take advantage of the fact that  exact base sizes are not critical in TTS!  As you can see the base above is about the right size for one of my 28mm scale Wars of the Roses foot units (12cm by 6cm).

In addition, the bases come with ready-cut holes into which Simon has stuck rare earth magnets such that your completed unit will ride safely in a steel tool box or a filing box lined with steel paper.

At the moment I use my WOTR collection to play Basic Impetus, which is base-size critical, so I don't know whether this approach would work for me.  I suppose a Blutac-ed down unit in a test game is called for.   Then again, I should also get around to test driving TTS! as a WOTR game.

Email ThisBlogThis!Share to TwitterShare to FacebookShare to Pinterest
Labels: 28mm, Impetus, To The Strongest!, WOTR

For the last few weeks I've been concentrating on 6mm models.  Currently on the workbench are a couple of elements of Russian infantry from my GNW project and a quantity of Huns and Goths for To The Strongest! 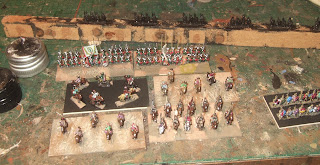 One of the great advantages of 6mm scale is that I can complete a unit in a couple of evenings.  These seven units have been done since Fiasco on 25th October without any real effort.  I think I'd have struggled to finish seven 28mm figures in that time.

And with 6mm I make each base into something of a diorama.  In this case I'm having a go at producing a (slightly squashed) Cantabrian circle. 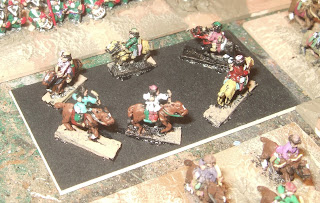 Email ThisBlogThis!Share to TwitterShare to FacebookShare to Pinterest
Labels: 6mm, GNW, To The Strongest!

I decided to have a try out of my recently expanded 1980s Spanish marine brigade.   Yet again I set up a small solo game of CWC on the map chest in my workshop.  It pitted my 4,000 point TEAR against 2,000 points of defending pseudo-Soviet Arabs.  It looked like this: 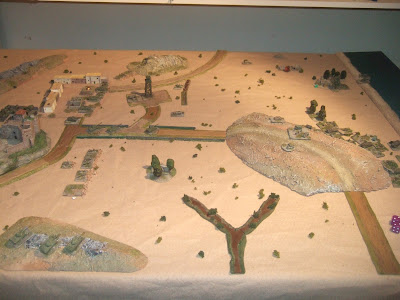 I have neither many photos nor much of a write-up as it quickly became clear (four turns) that the scenario was one in which the Spanish would struggle.  I'd given them too much open ground to cover to reach their objectives.

The Spanish ended up largely hiding behind a hill, on which command and recce units deployed to try and bring down artillery fire on the enemy. 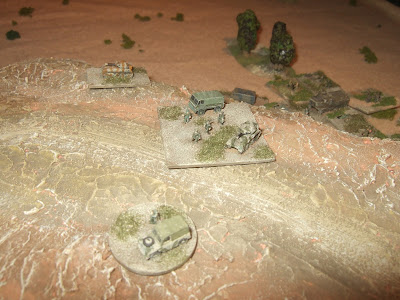 Who were a mix of dug-in infantry and T-55 tanks. 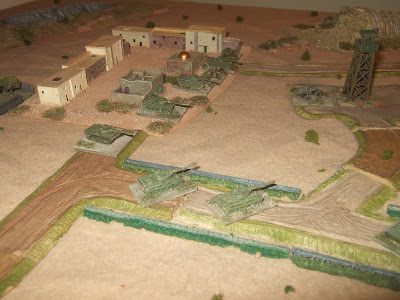 With only three main battle tanks (and those are outdated M48A3s) it's going to be a serious challenge to find a sensible task for this force in next September's Aegean Strike game.
Posted by Counterpane at 12:34 AM 4 comments: