The ATV building is complete!

Inspired by the Fernsehturm in Stuttgart, it now has its transmission tower and observation deck.

For those of you wanting some idea of the scale of this edifice, that's a 1/72nd scale BTR-80 parked outside the front door.

And on the top, a Russian Naval Infantry SAM team... 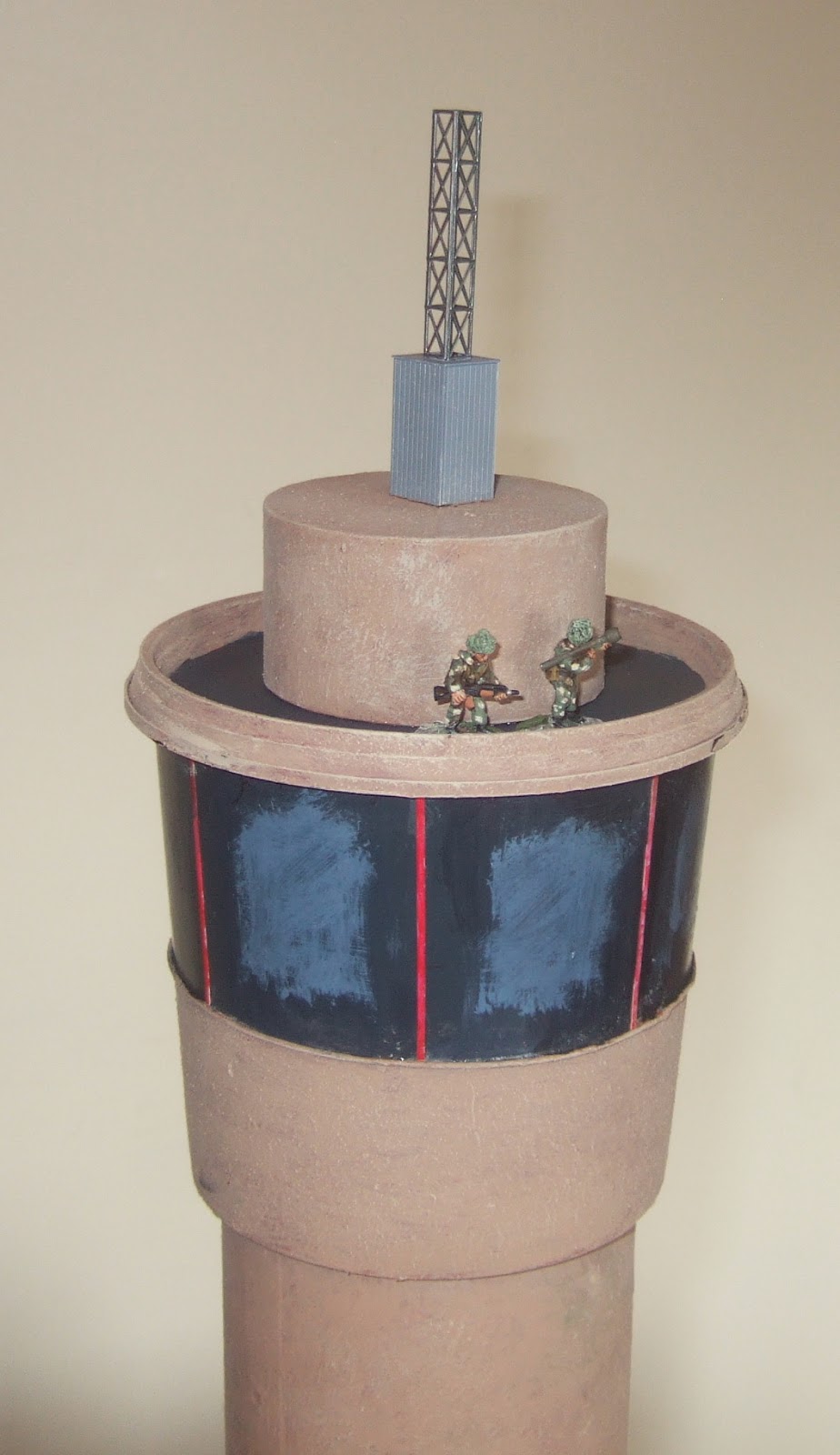 This should certainly be a tactically significant building!

Posted by Counterpane at 6:21 AM 7 comments:

Having decided I won't have time to build a Mi-24 Hind in the two weeks available before Crisis Point III, I went to Antics models in Sheffield to see if they had a suitable, quick-to-build Soviet aircraft kit.

In a stroke of sheer good fortune, I found this ready-made MiG-3: 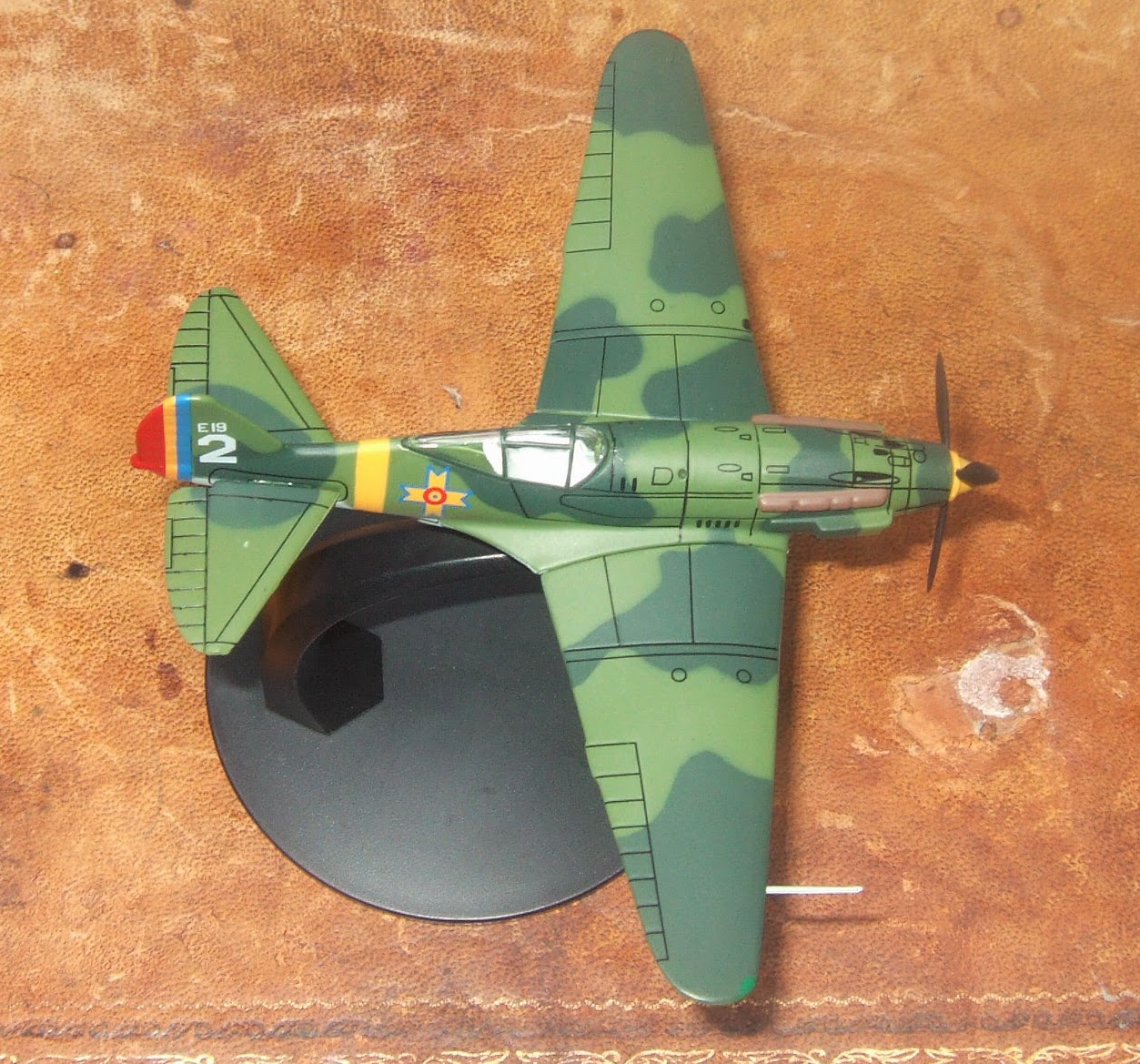 It's in Romanian Air Force colours, which is a bonus because red, yellow and blue happen to be the colours of the Andreivian-Armenian flag!  I'll need to paint out the Romanian cross and paint in the canopy as it looks a bit daft flying with no pilot. 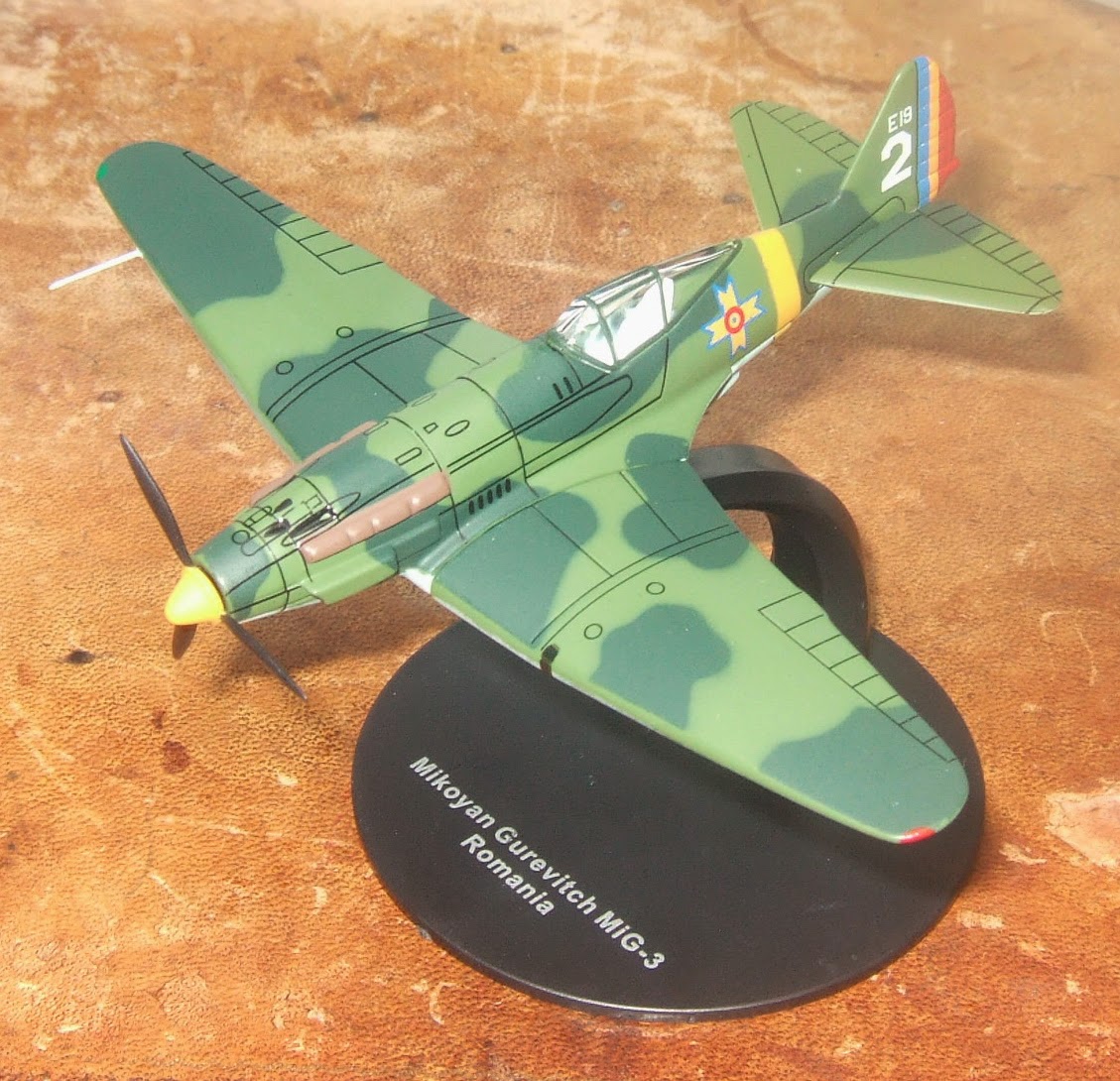 An even bigger bonus was that the model is lacking an alternative part - one of the lowered undercarriage units.  This didn't bother me but did reduce the price to £6.99; the same as the cheapest aircraft kit in the shop! 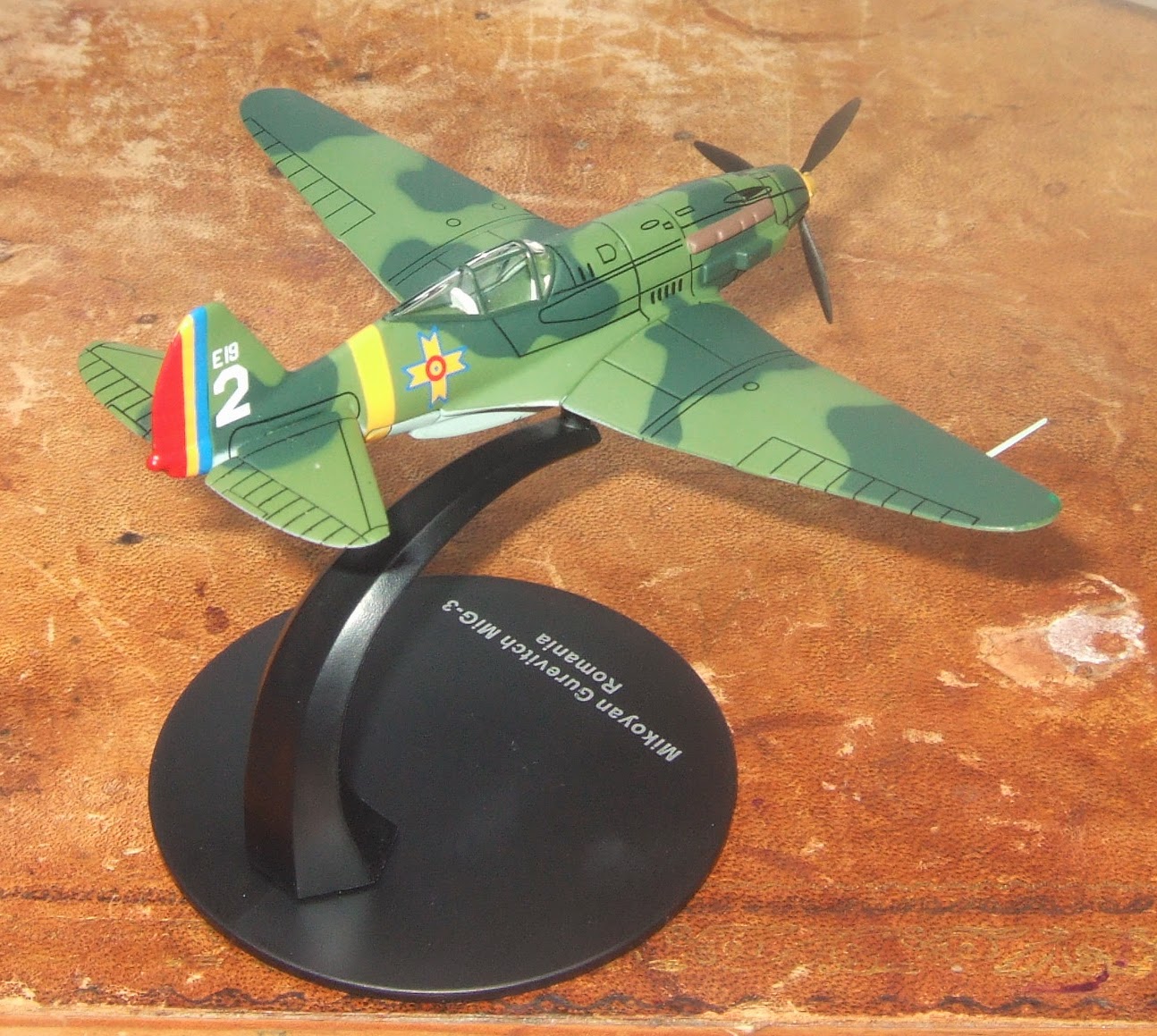 What to do with left-over Green Stuff

I always end up having mixed slightly more Green Stuff than I need.  Here's what I do with the excess.

Blob some onto a penny, smooth down the edges and poke a hole in the middle: 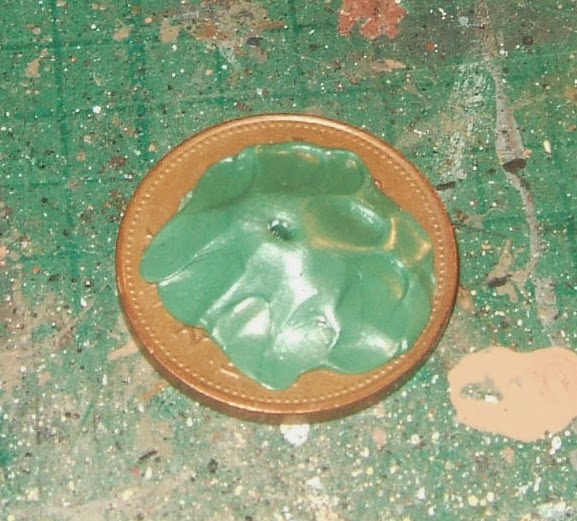 Add your terrain-texturing material; in my case brown-tinted tile grout: 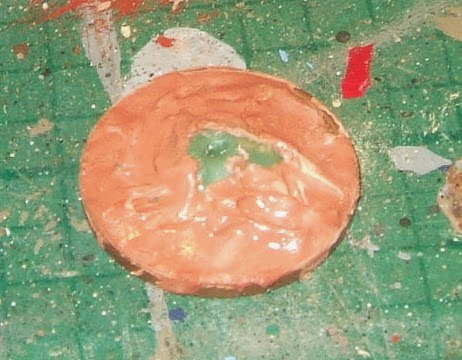 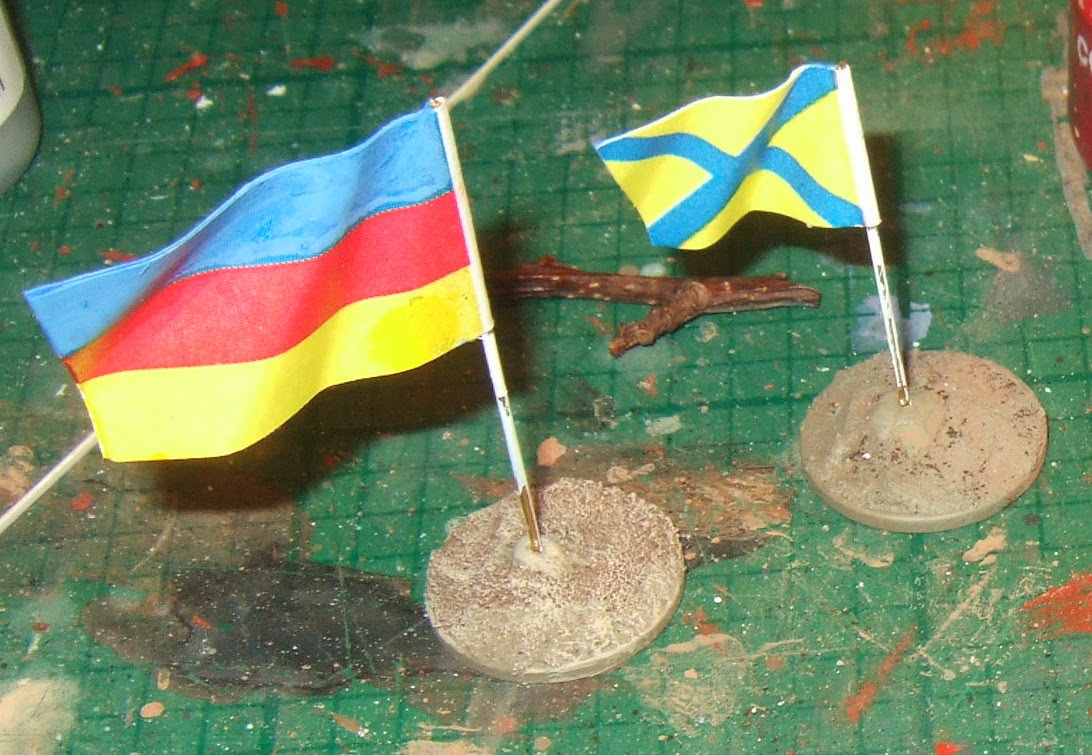 Or you can use spare Green Stuff to attach bits of dry twig to a penny.  Two shown here with the base already textured and painted: 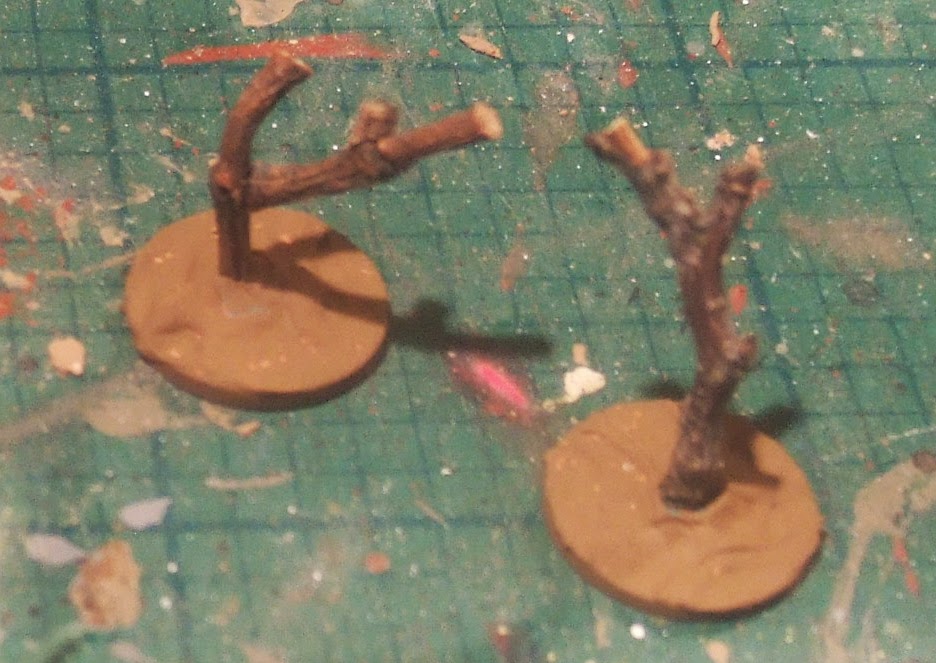 Dry-brush base, glue on clump foliage and voila, 6mm trees: 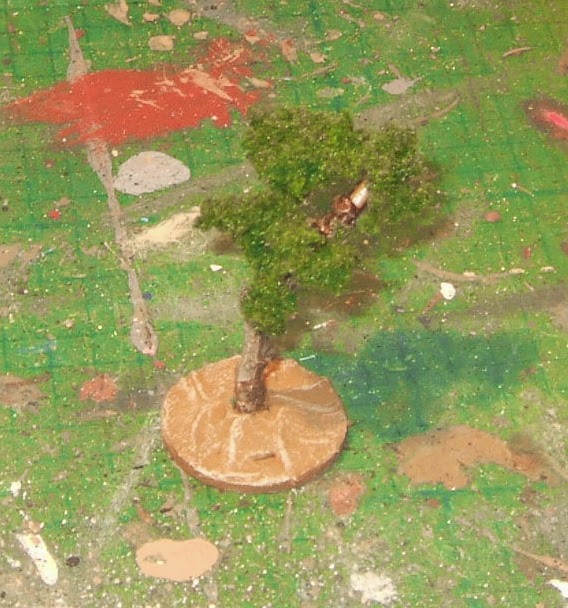 Finally, with several batches of left-over Green Stuff you can gradually build up this kind of thing, again on a penny: 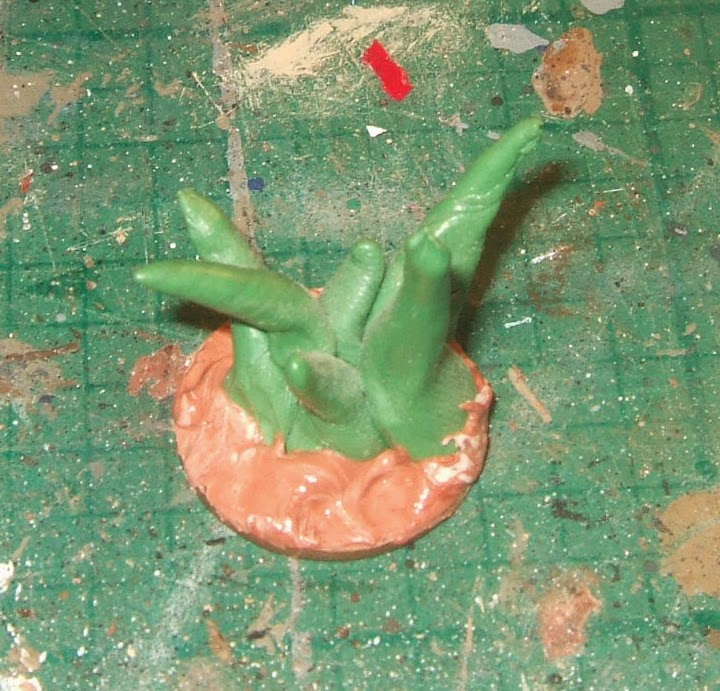 Paint orange/yellow, glue on cotton wool or paint-dyed interfacing material and you have a 6mm scale explosion marker: 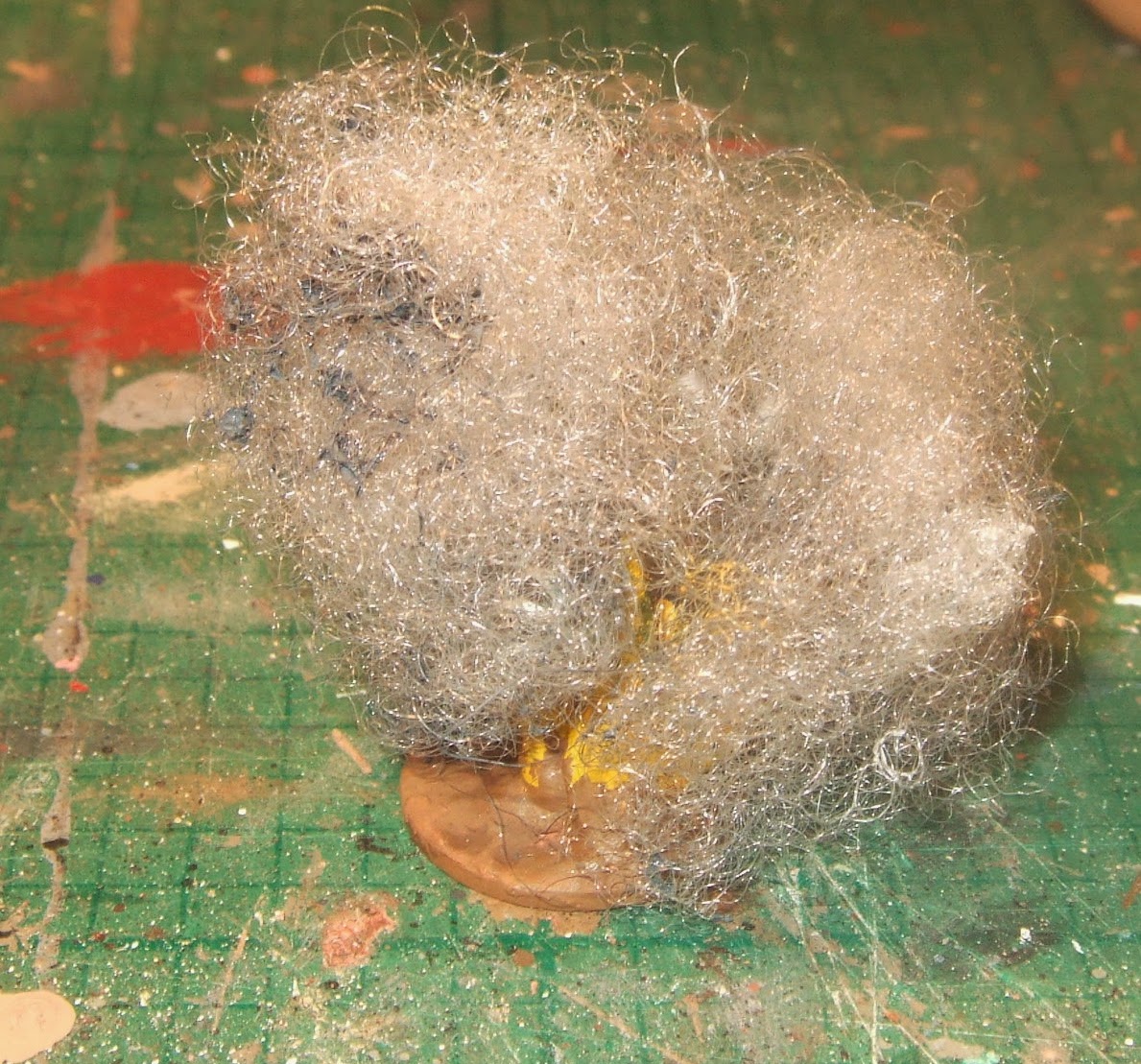 Posted by Counterpane at 1:05 AM 2 comments:

This weekend saw me finally get round to completing the headquarters of Andreivian TV, seen here with some recently-painted Russian Naval Infantry. 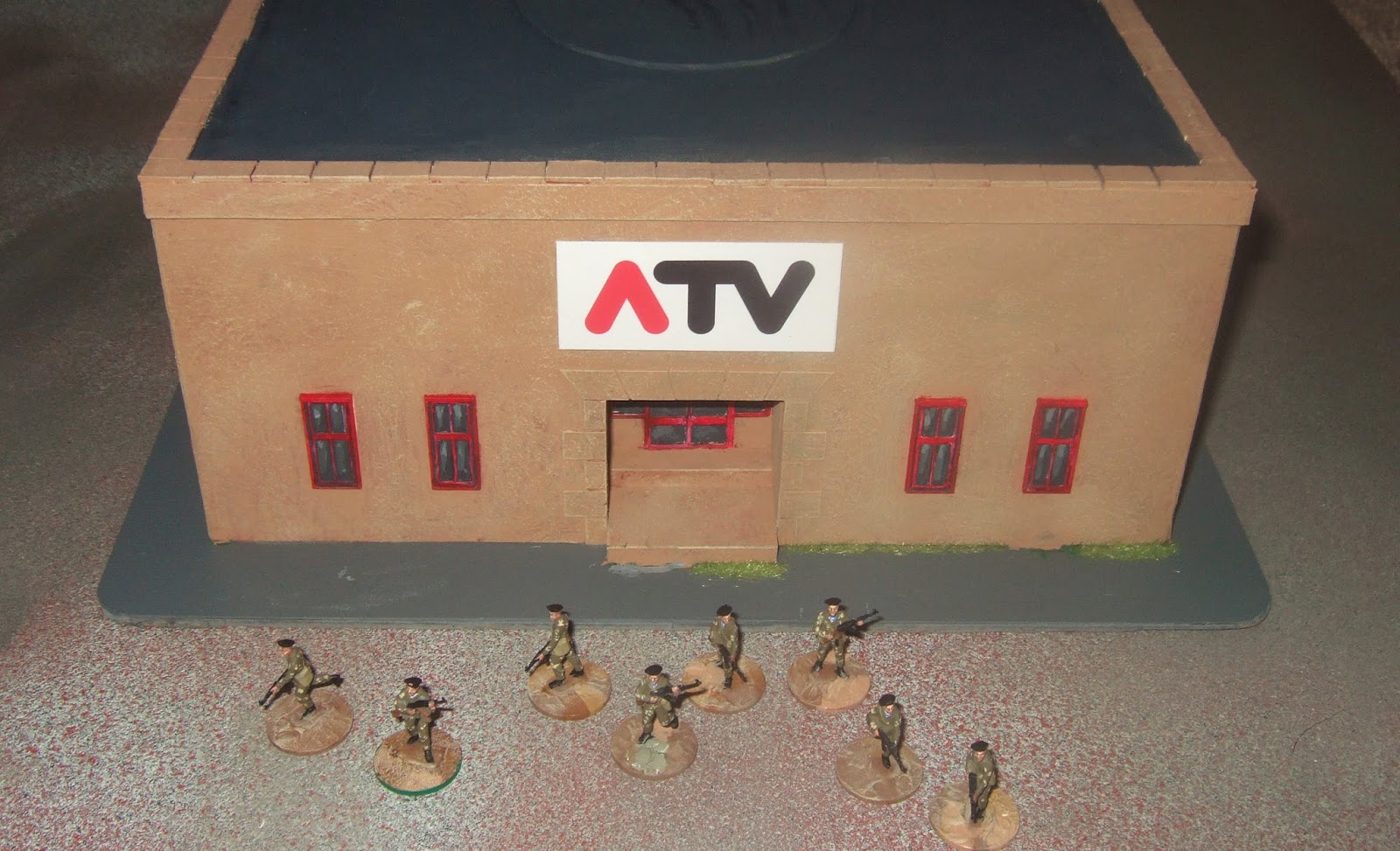 The building will play a significant role in the upcoming Crisis Point III - Battle For Tcherbevan (in which there are still places available for players). 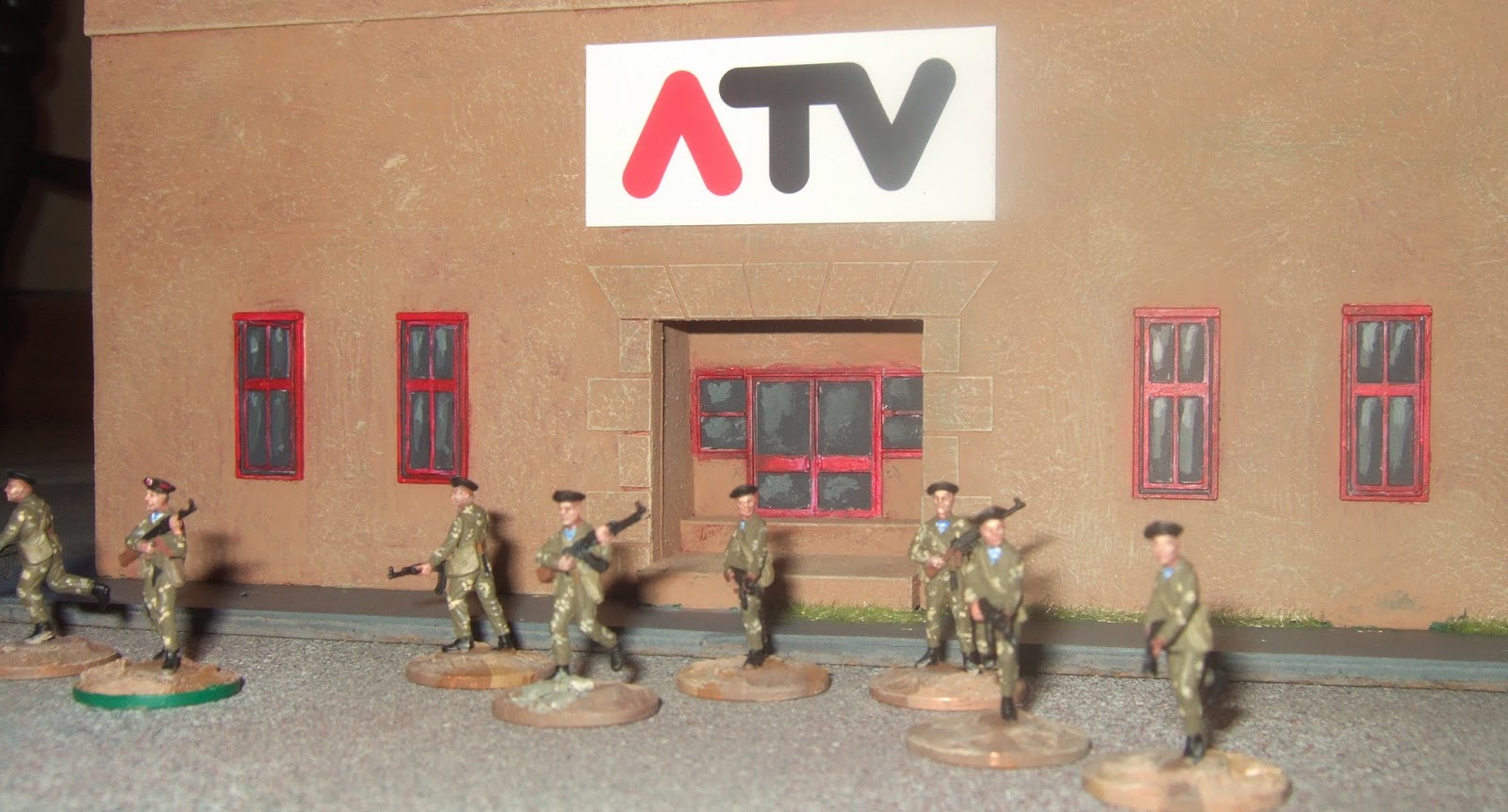 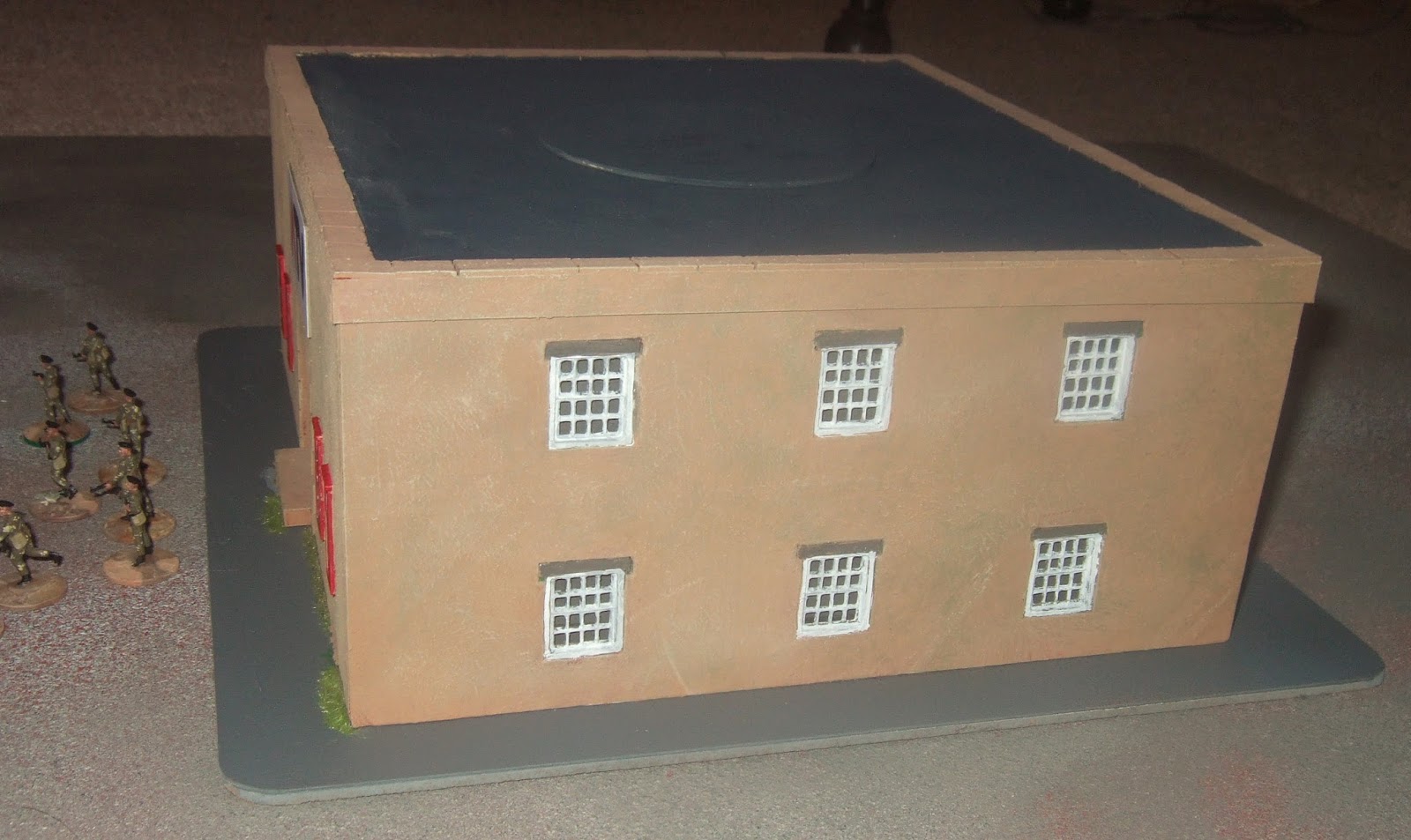 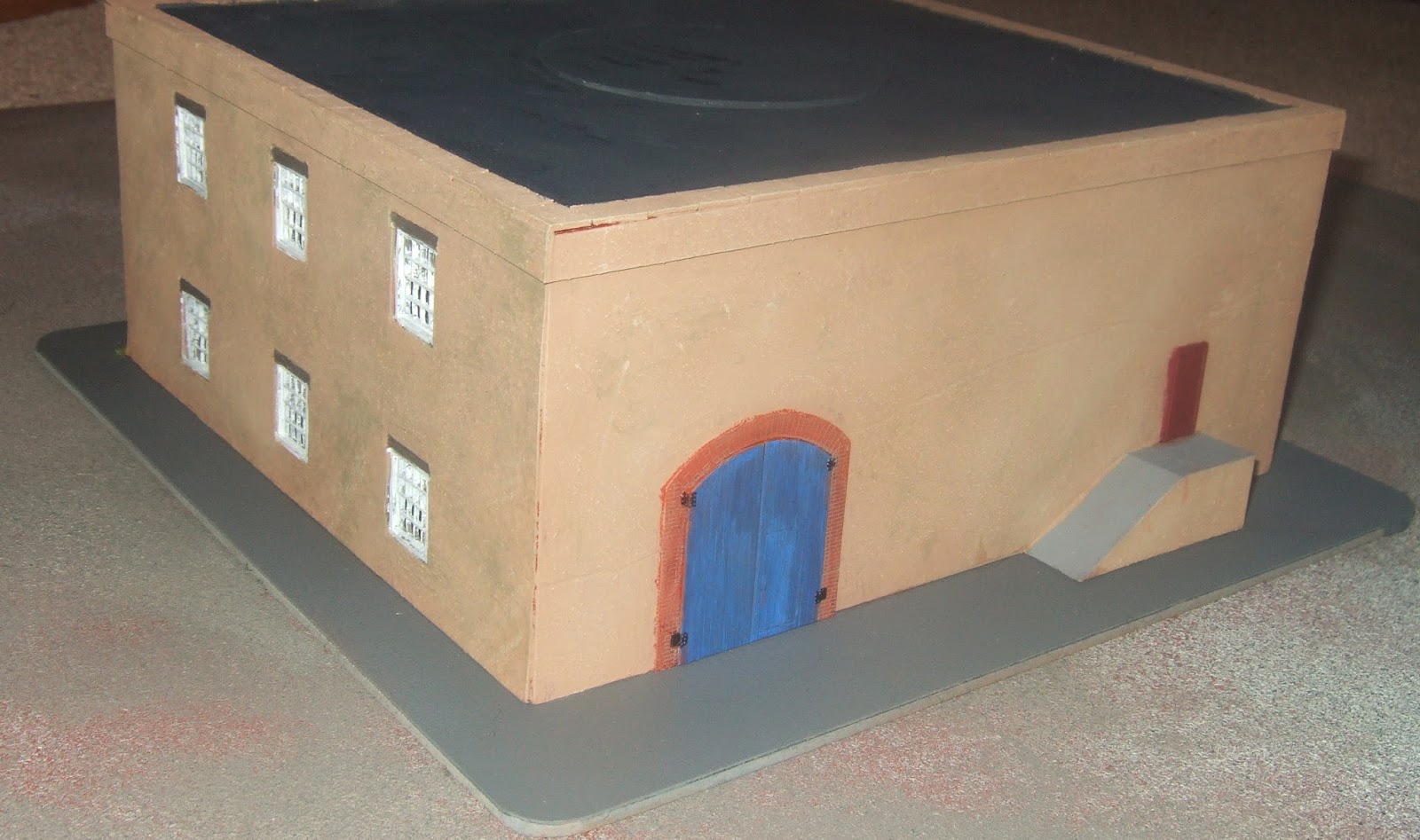 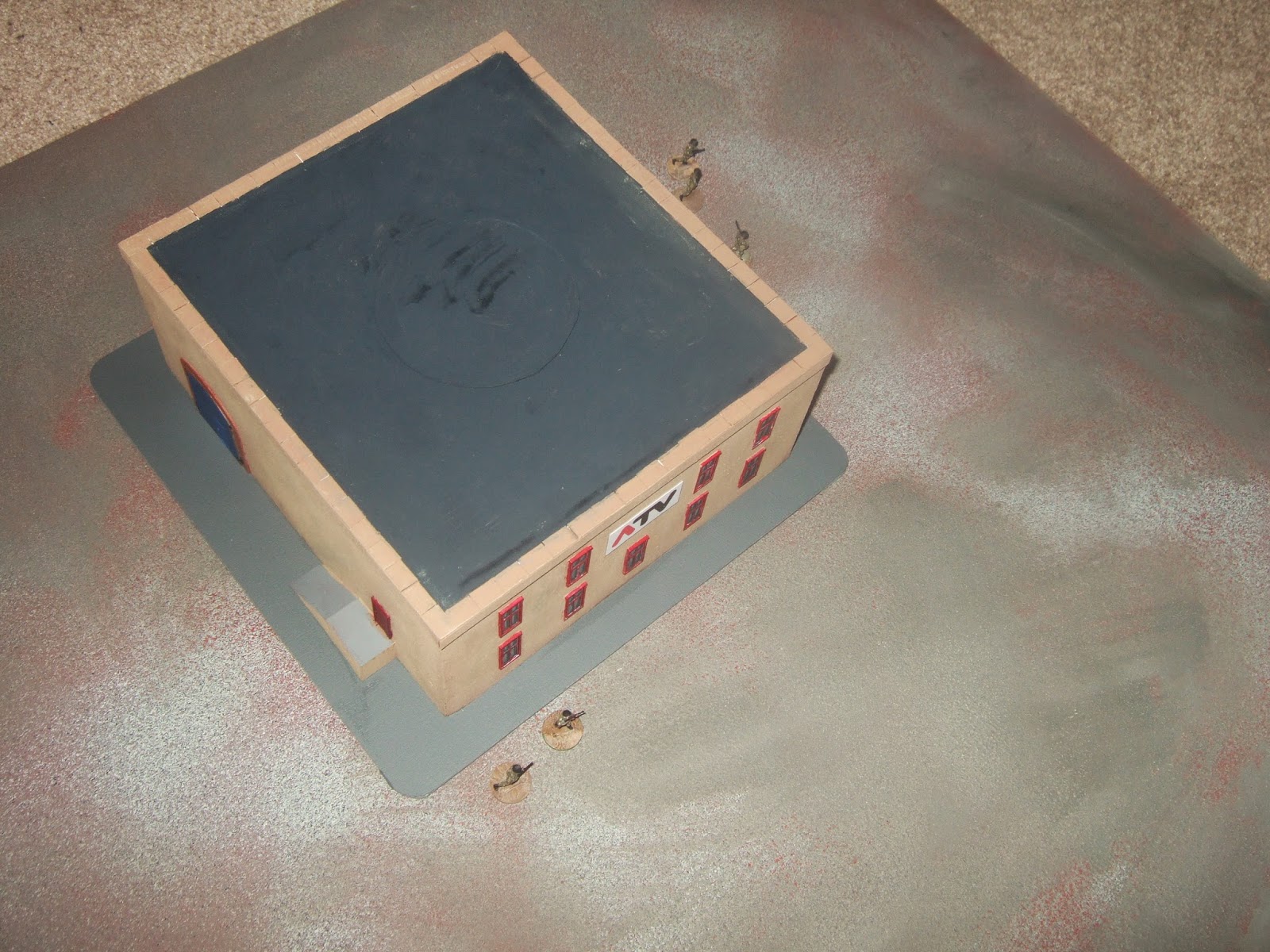 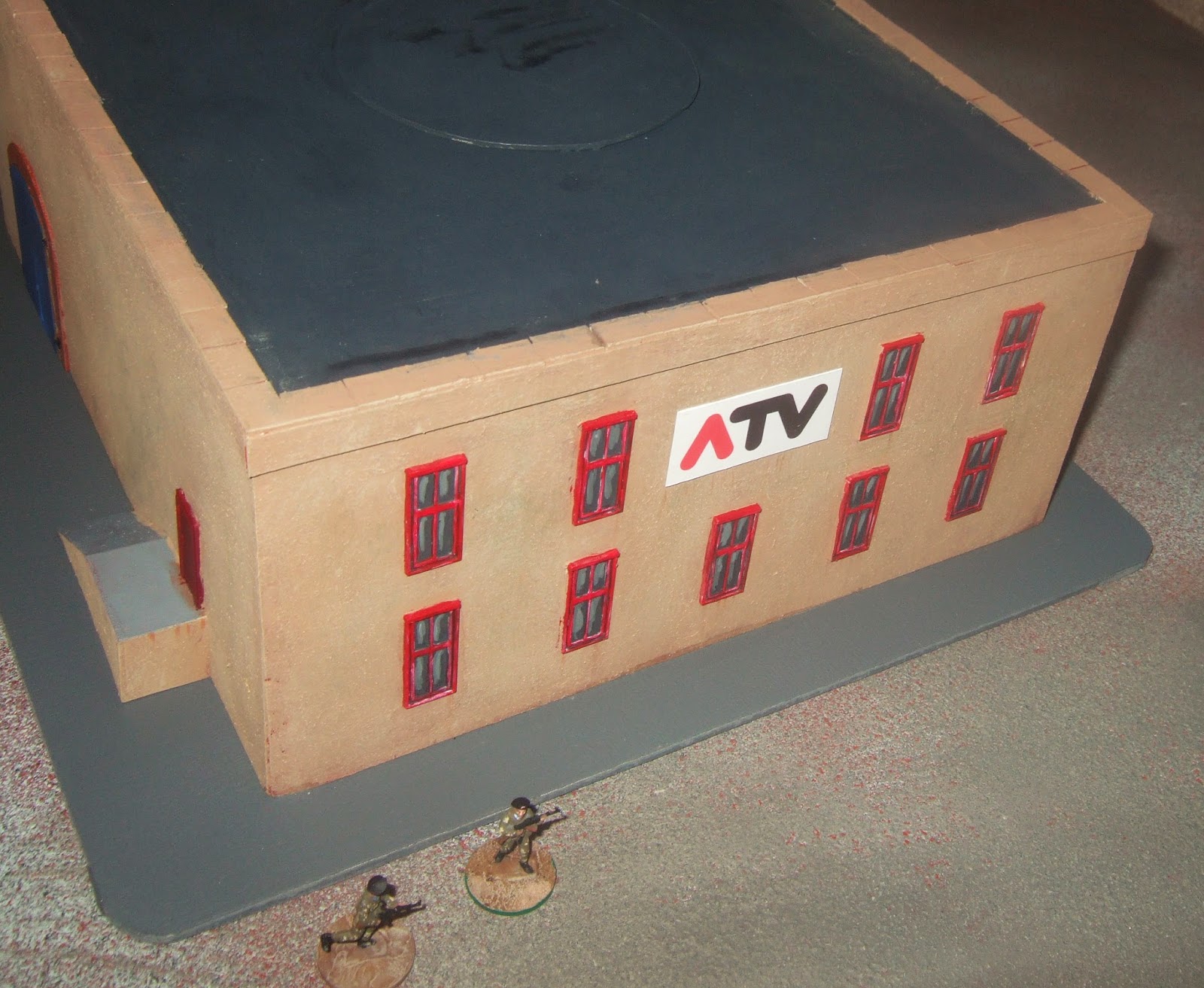 I was down in London yesterday at a conference and got away in time to pop into Orc's Nest in Covent Garden.  I ended up buying Maurice and the accompanying card deck: 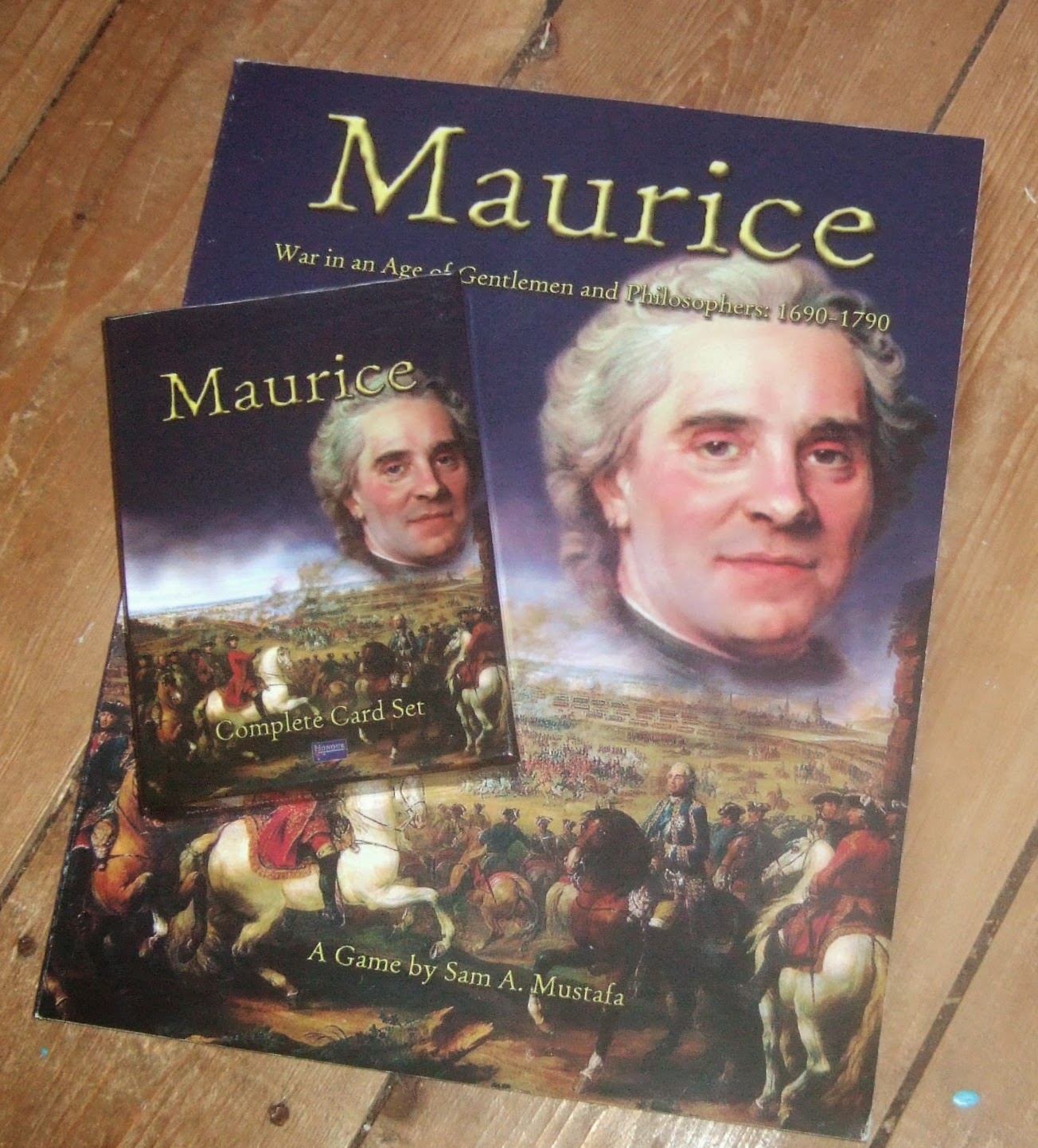 I wasn't going to buy it until I'd tried out the free 'Maurice Lite' version I'd downloaded but in the end I weakened because (a) Wargames Emporium has sold out and is unlikely to get another copy, (b) the 'lite' version doesn't cover irregular troops so I couldn't use my Ottoman Turks, and (c) I'd had two glasses of red wine at lunch.

I'll report back later with a review of the rules.
Posted by Counterpane at 1:23 PM 4 comments:

Email ThisBlogThis!Share to TwitterShare to FacebookShare to Pinterest
Labels: Maurice

On the Workbench - a miscellany

I've been a bit quiet here of late as I'm working on something that I want to progress further before the big reveal.  However, last night I got a few things to the point where they just need varnishing and static-grassing.

These Sun Dome militia are my first purpose-made Song of Blades and Heroes warband for Glorantha. 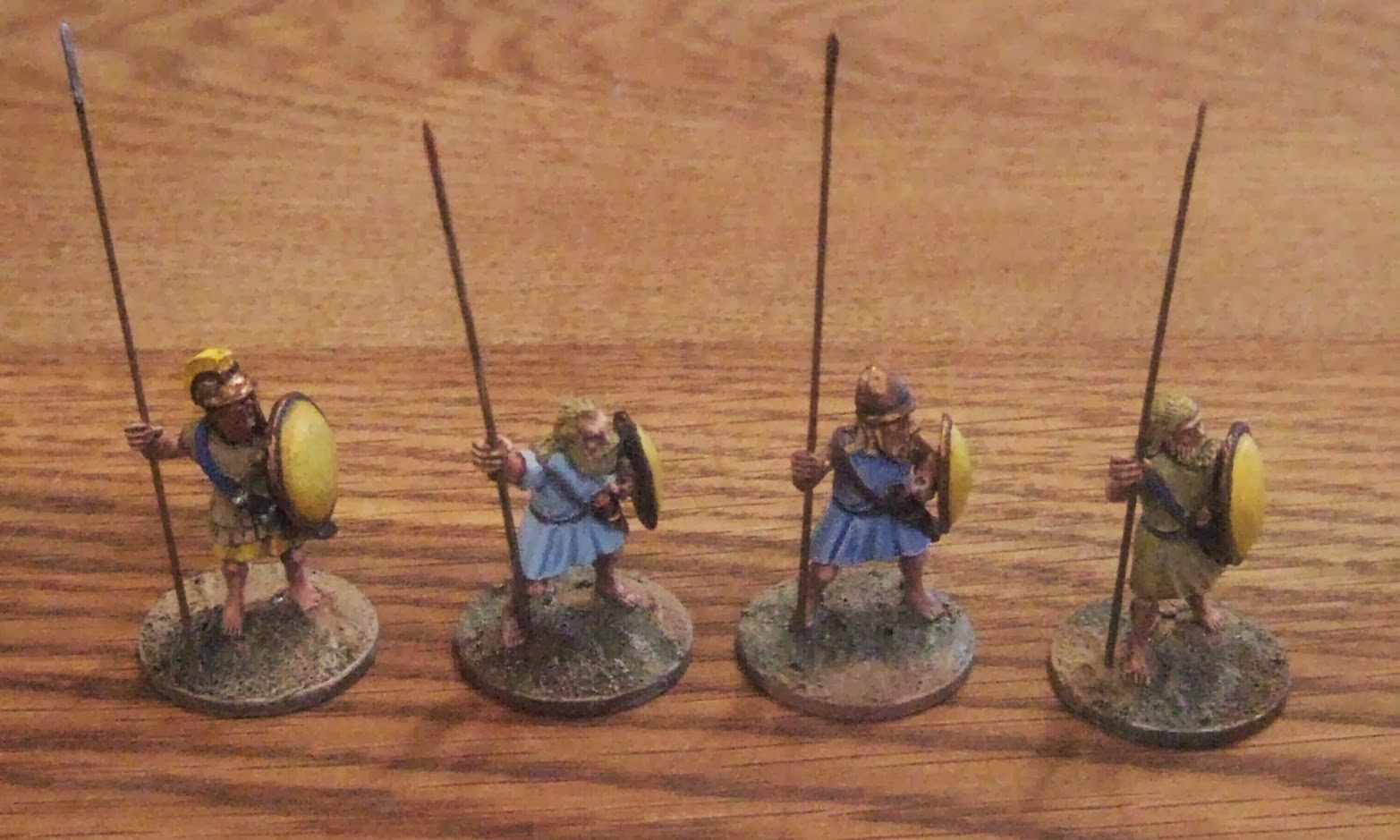 If I remember correctly they are Black Tree Spartans left over from my Sun Domer Nordes of the Things army.  Now I need to work out their SOBH stats. 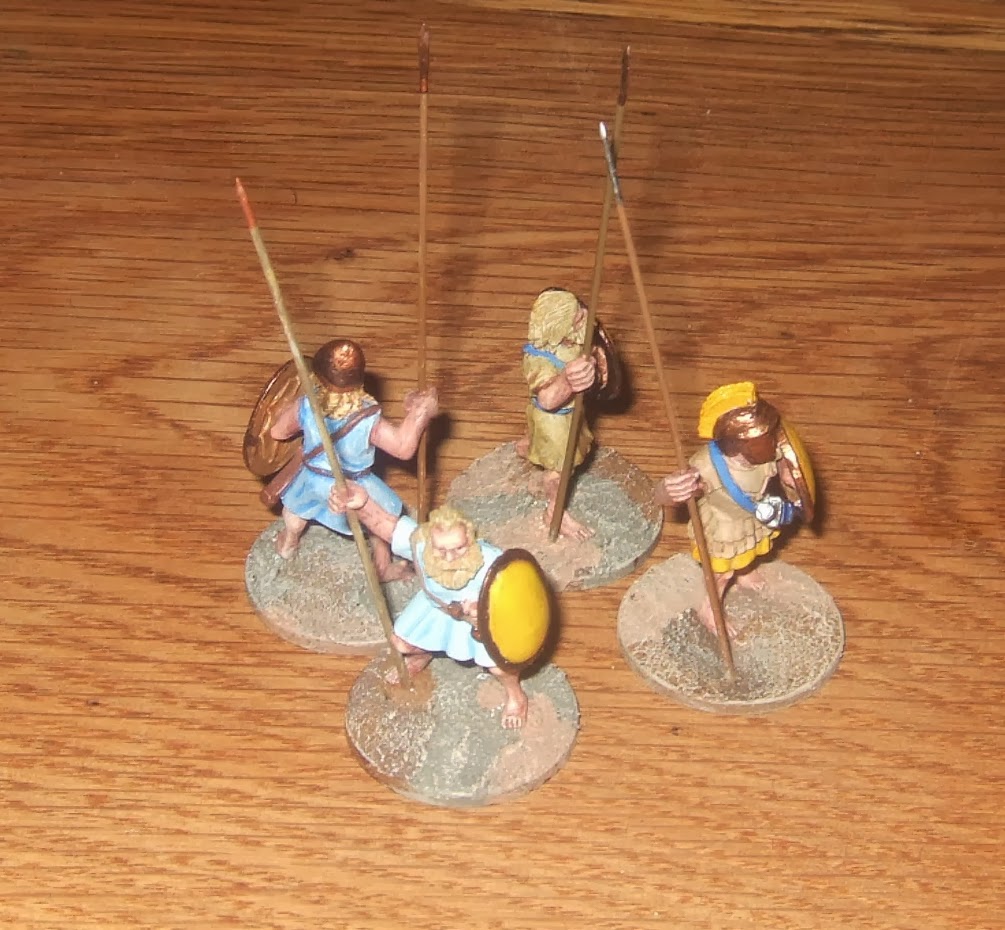 Meanwhile, this guy is a Foundry Wild West type.  I'm really not into Western gaming but I guess he could have some Pulp usefulness. 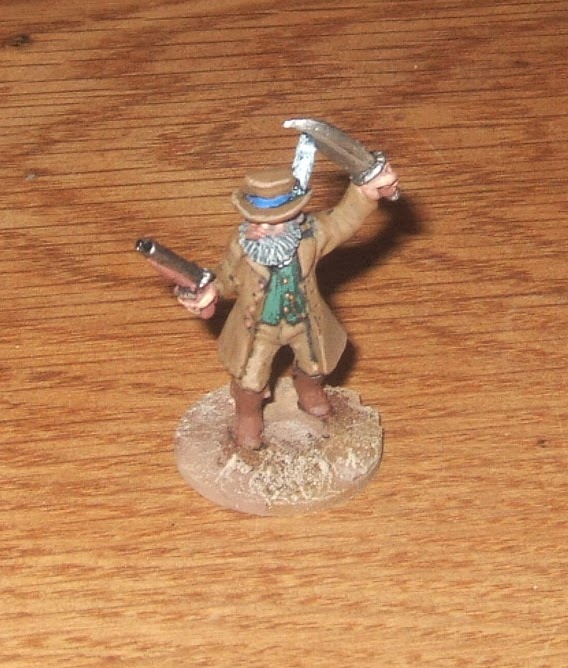 Finally, we have these two.  They are an Esci Soviet paratrooper painted as Soviet Naval Infantry and an Orion Chechen. 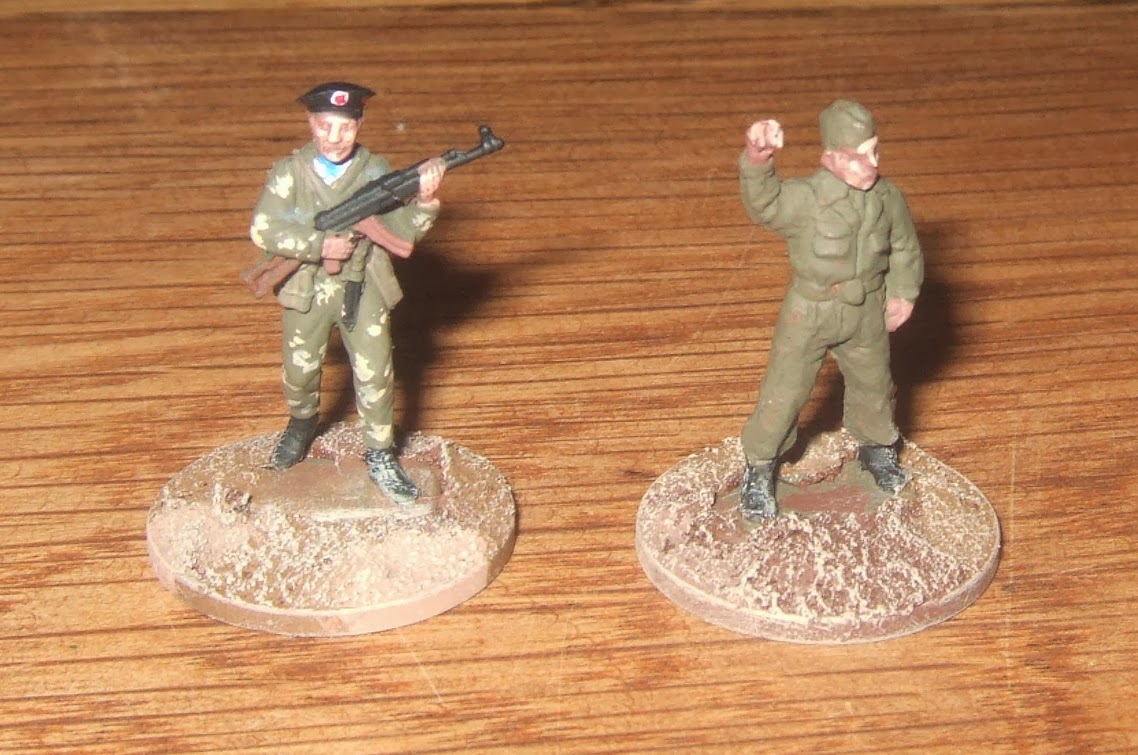 These were both rather hurriedly painted - I just felt like a break from miniature architecture.  I'm disappointed by the stock on the Naval Infatryman's AK-47.  I filled the original skeleton stock with GW's Liquid Green Stuff but it's contracted significantly.  I'll have to do it again with proper Green Stuff.
Posted by Counterpane at 12:44 AM 3 comments:

I picked up Sean Longden's book T-Force from my local library.  It's an enjoyable book about a little-known (at least to me) composite unit of the British armed forces that, in the final months of WW2 and the first months of the Cold War, led the process of capturing German scientists, research facilities and industrial complexes. 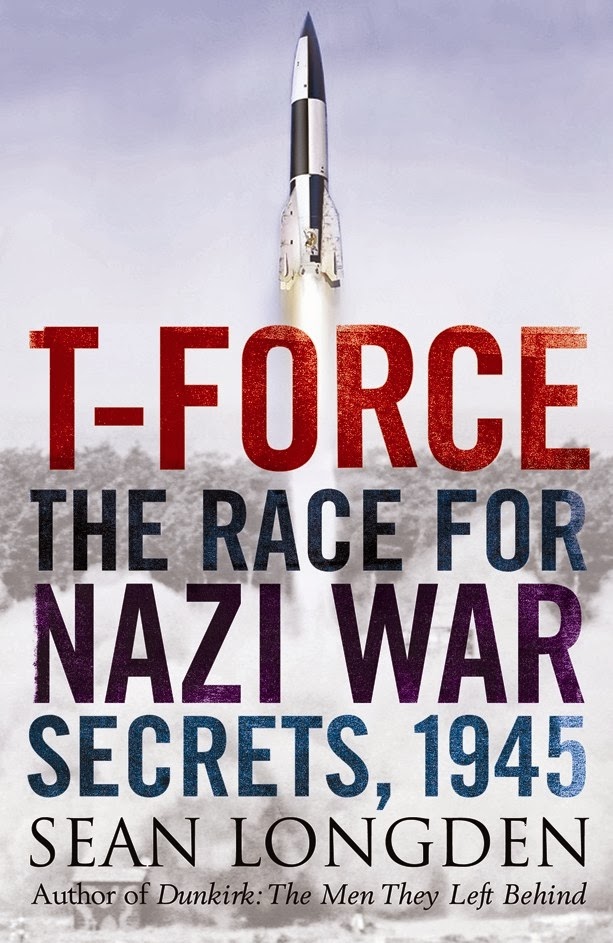 I was somewhat amused by one item though.  On page 185 Longden writes:

"At Utrecht the unit detained a Dr Strabismus, scientist who had earned his place on the [Combined Intelligence Objectives Sub-committee] list due to his research on perpetual motion.  The doctor was an interesting find since he was last reported as working in Spain in 1944."

So far so unremarkable, you may think.  But I was a great fan of Beachcomber, By The Way a short-lived Radio 4 series based upon the writings of J B Morton.  Morton's Beachcomber column was a feature of the Daily Express from the 1920s and earlier.  In many ways it prefigured the surreal comedy of the Goons and Monty Python and featured a number of recurring characters including an inventor and scientist called Dr Strabismus (whom God preserve) of Utrecht.

Now I've been unable to find evidence for when Dr Strabismus first appeared in the column but I think it's unlikely that Beachcomber took the name from an obscure real-life scientist whose name happened to be the Latin for "squint".  So the question then arises, is Longden spoofing us or has he been taken in?

Personally, I rather like the latter option.  The dying months of World War 2 were a time of chaos when the British Army's natural tendency to keep voluminous paperwork on everything must have been under tremendous strain.  I love the idea of some bored Army officer introducing a beloved fictional character into the records to see how far it got.

Of course, if any of you know differently, I'd love to hear.

Construction is under way on the headquarters of Andreivian Television. 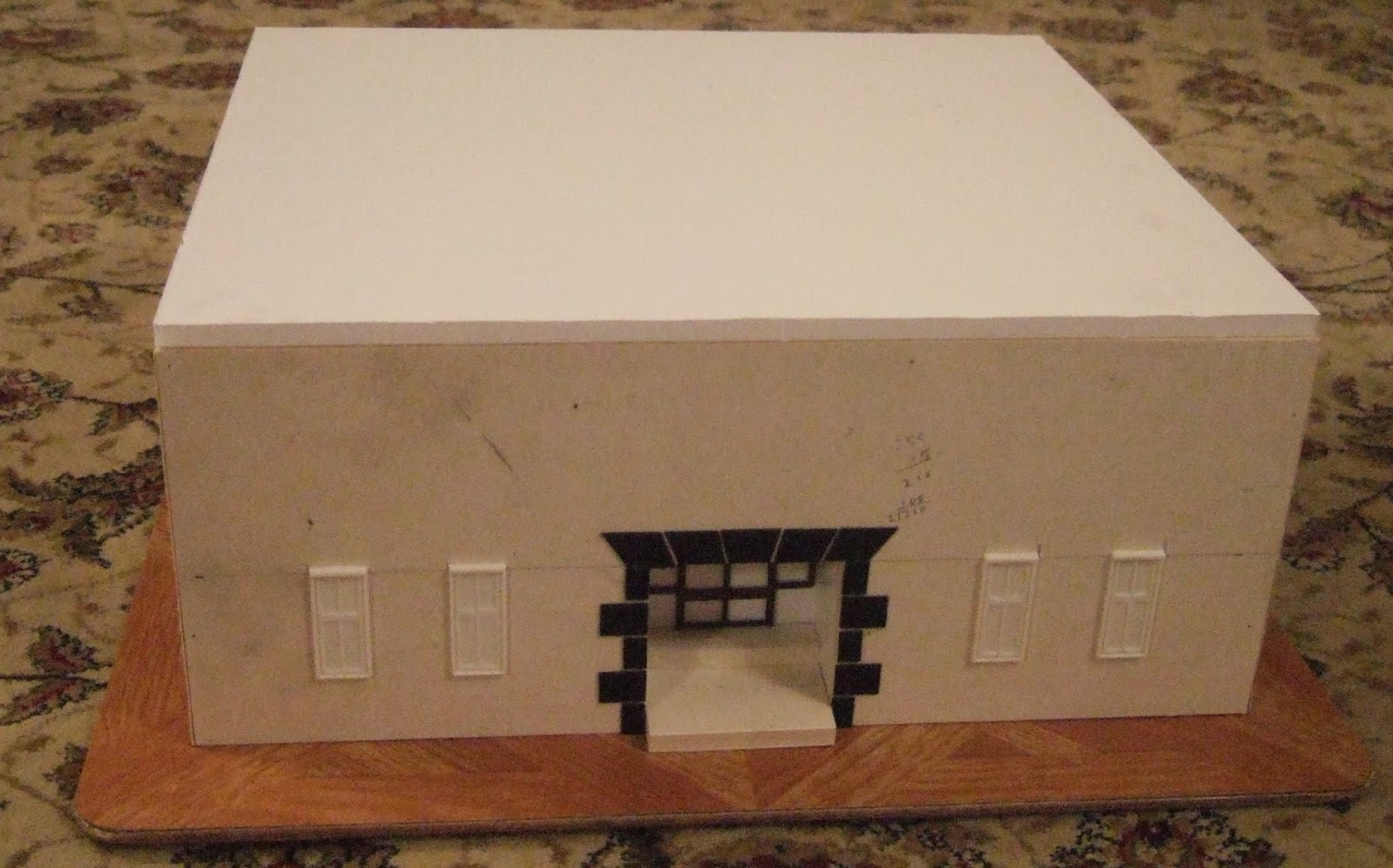 It's basically a foamcore box. The main entrance being a smaller box built behind a cut-out in the front wall.  The building sits on a square of hardboard with rounded corners, topped with self adhesive floor tile for texture. 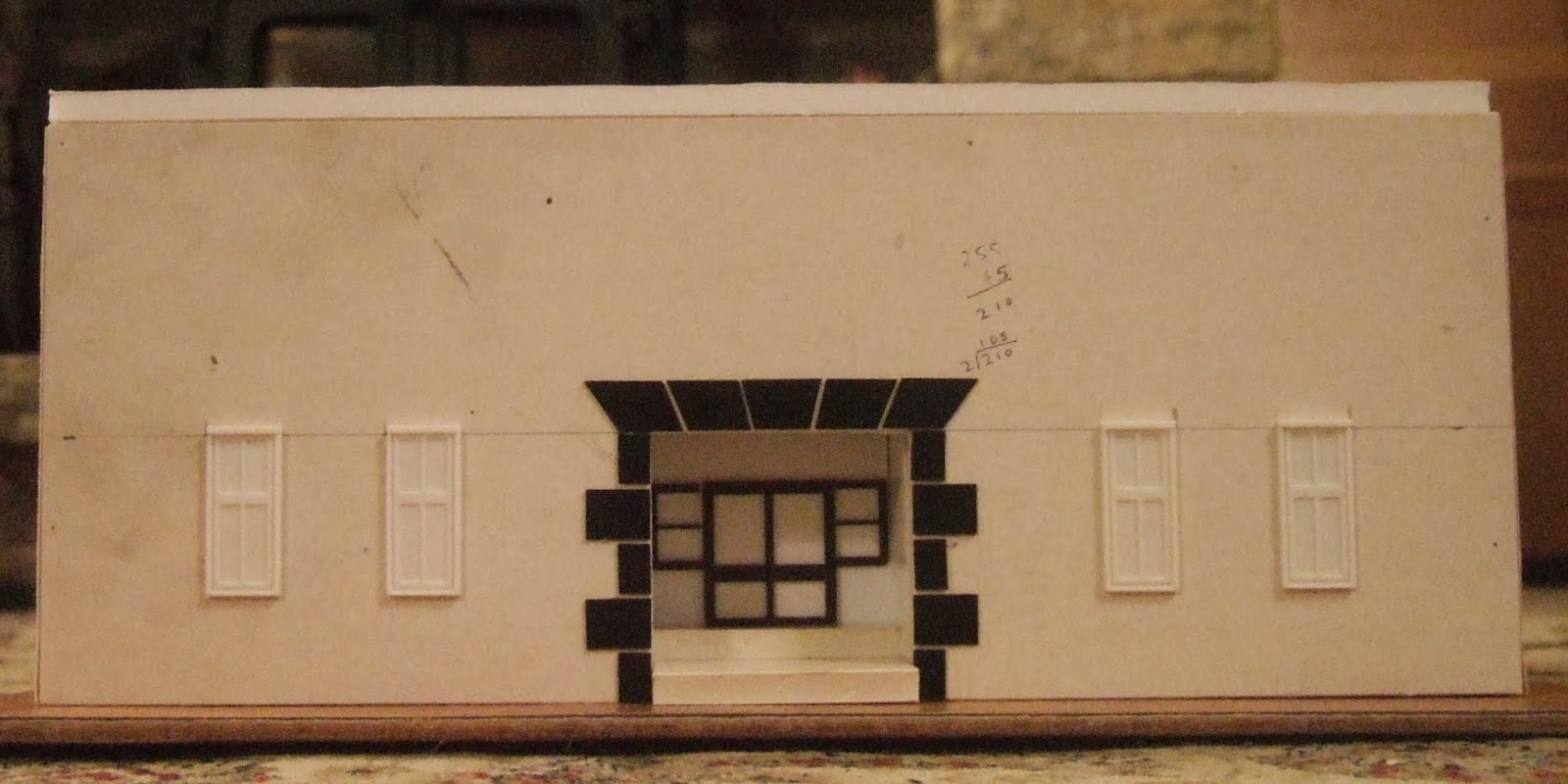 The stonework around the entrance is pieces of thin plastic card whilst the interior doors and the white windows are slightly modified from plastic pieces bought from a model railway supplier. 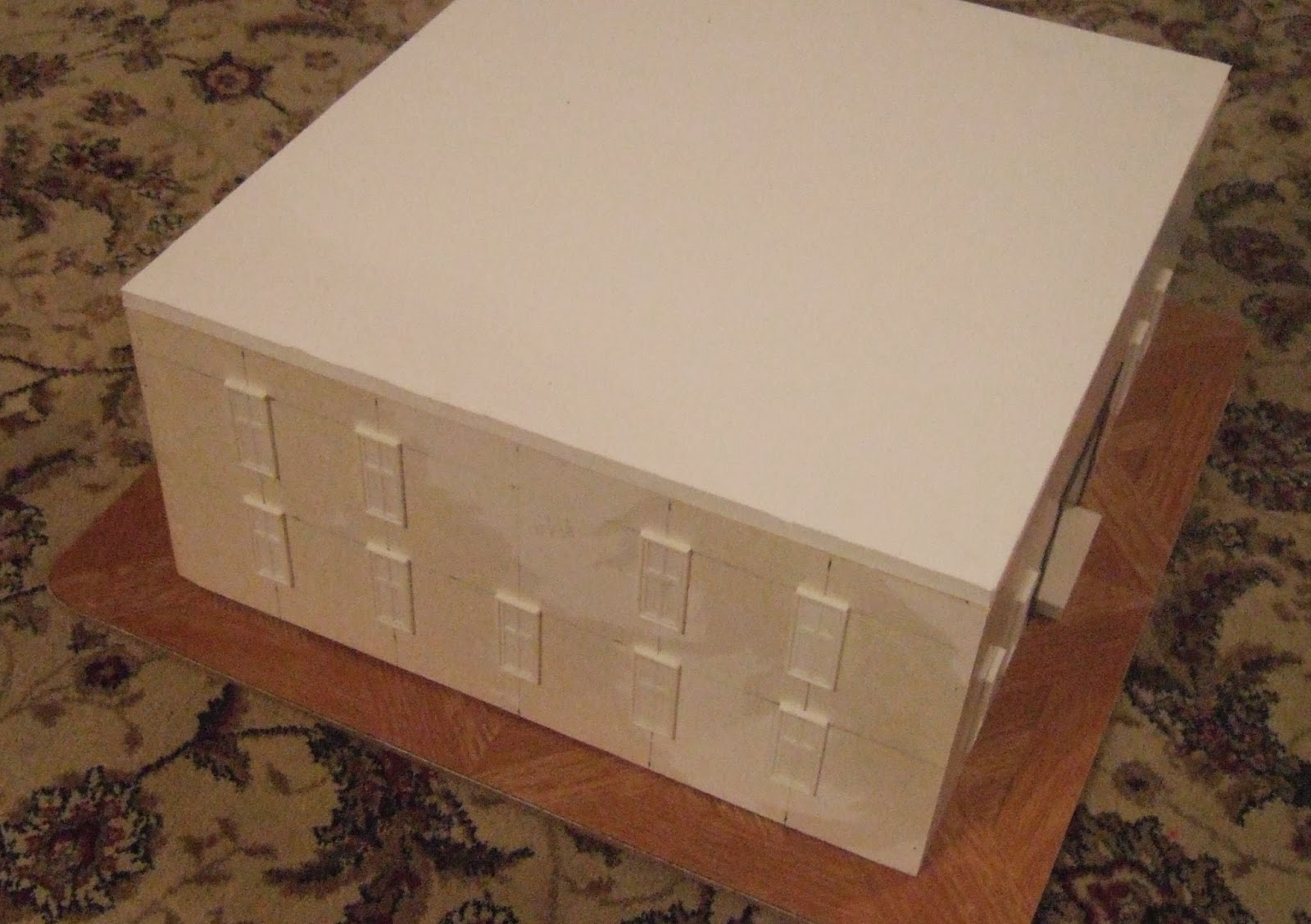 The next step will be to add a frieze around the top of the walls to disguise the sides of the foamcore slab that forms the roof. 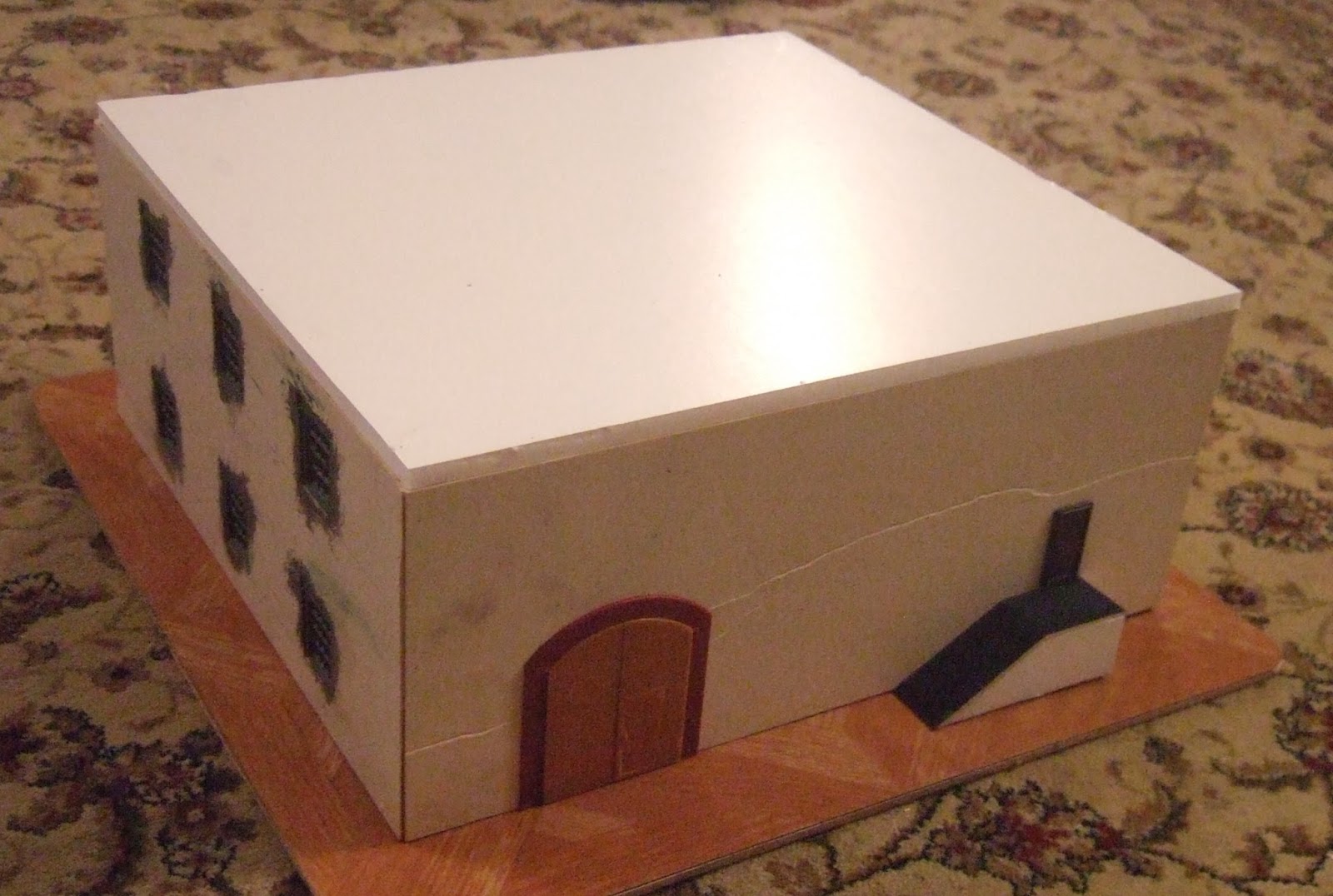 The double delivery doors and the surrounding brick arch are left-over parts from the MiniArt Goods Depot. A cardboard ramp leads up to a Peco spare part door. 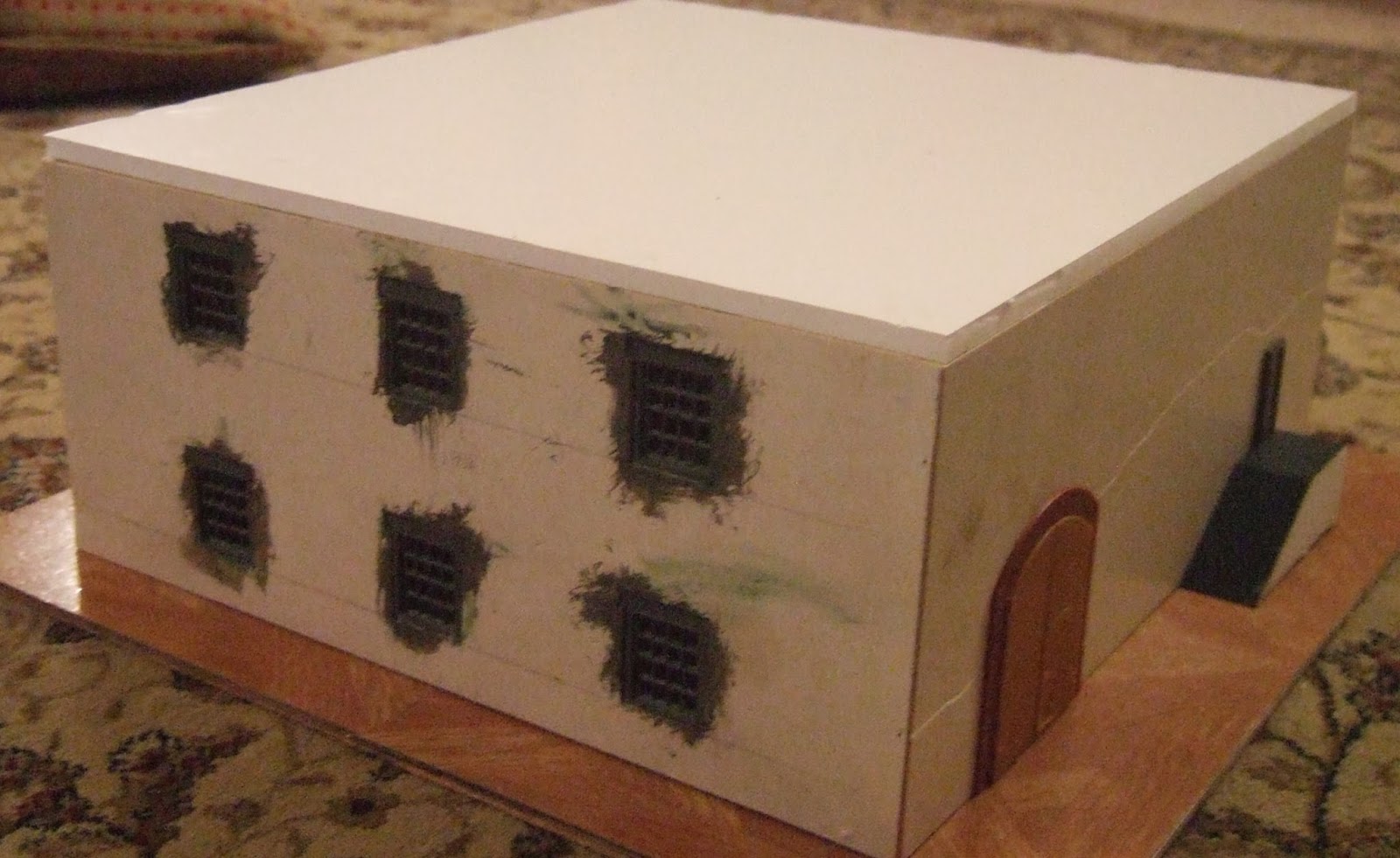 Finally, the remaining windows are white metal castings from Linka that I picked up at last year's Gauntlet.  I've cut appropriately sized holes into the wall and glued in the castings and then used Green Stuff to fill the gaps.  I know these windows don't match those on the rest of the building but I could see corruption in the Andreivian building sector leading to a change in specification as construction went ahead!
Posted by Counterpane at 11:09 PM No comments:

A propos of nothing in particular, here's a couple of random pics from the archives.

This is the Dwarves of Stilts army originally constructed by Sebastian Rodgers but now, I believe, in the collection of Tony Horobin.  As you can see, it's very, very silly. 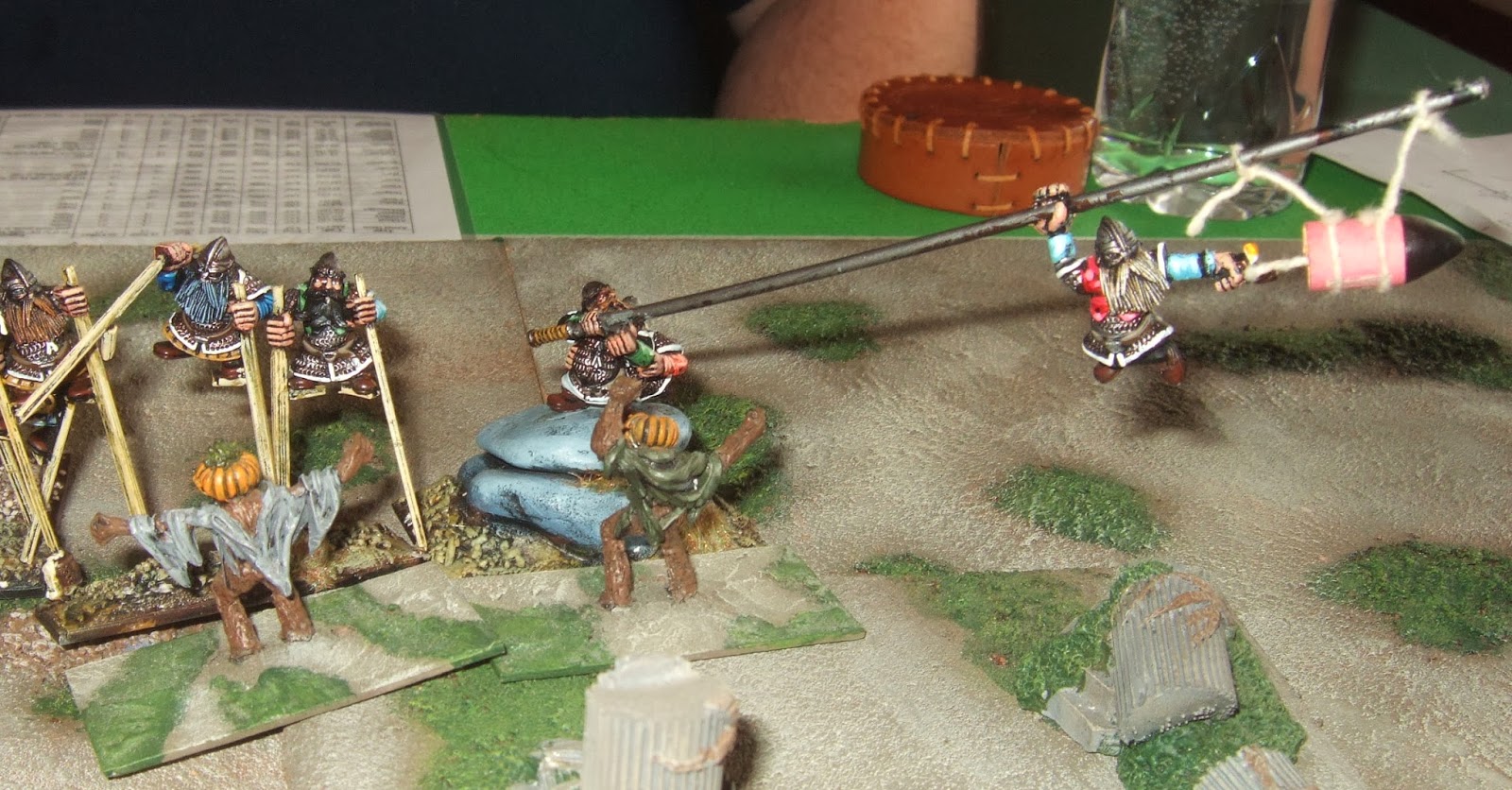 More Progress on the Andreivian Coaster

Unfortunately because I'm working mostly in black plastic card there isn't a lot to see.  I'm reminded of that bit in the Hitchhiker's Guide to the Galaxy about "I press a black button on a black panel and a little black light lights up black to show me I've done it."

In fact I've built a new superstructure and added a hatch with a porthole to the front of it.  Windows will follow next.  I've also plated over the hole left by removing the winch and made a new single, large hatch-cover to replace two smaller ones.  I've removed or omitted all of the under-scale railings and filled the mounting holes with green stuff.  When I've done the windows and found a suitable ships boat I can begin rigging and painting.
Posted by Counterpane at 2:27 PM No comments: