So what have I been up to?

As usual, I've been failing to concentrate properly on the game that's got a deadline coming up. This happens at work too but at least there I can blame other people badgering me to get stuff done for their particular project.

Right now I should be concentrating on getting myself ready to run big game of Chain of Command at Gauntlet in July.  And to some extent I have been working on that.  I've had several goes at playing Chain of Command solo to try out different bits of the rules.

I tried adapting one of the scenarios from Grossdeutschland at Kursk: 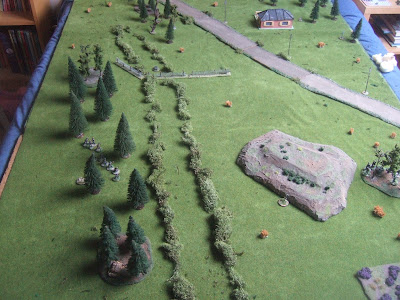 I've also played a few straight up scenarios from the rules.   I'm increasingly thinking that the initial patrol scenario's not particularly interesting.  It seems to bog down a bit when everything is on the table.

I'm also entirely on board with the suggestion in the rules that the British infantry and motor platoons will always have to out-manoever their German opponents.  They ain't gonna win by firepower alone! 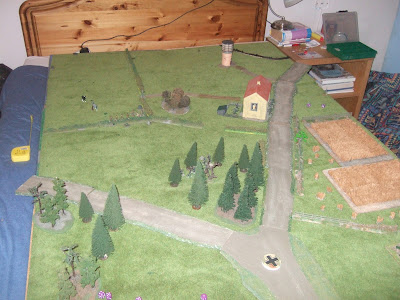 The most recent game, below, was  about exploring the terrain classes in the game and seeing how I could use them to model different real world structures. For example, the row of trees beside the standalone garage of the ruined cottage provide no cover at ground level  but because of their dose foliage they provide light cover to both outgoing and incoming fire for any troops in position on the roof. 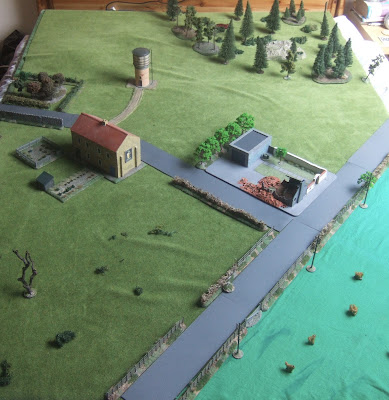 I've also been working on a platoon of Soviet infantry in winter dress for Gauntlet.  They are a mix of Italeri and Revell plastics: 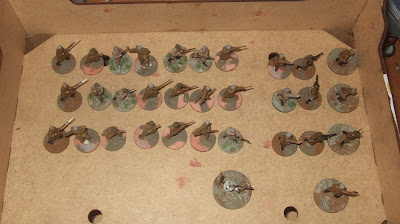 When they're finished I want to add some snow to their bases.  Not sure yet what material I'll use to do that. 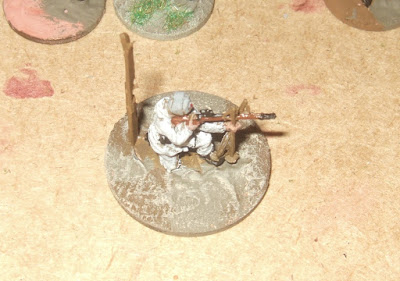 Less suitable use of my time has been the painting of these Gripping Beast plastic Late Romans for the Bacaudae Campaign.  I quite like these chaps.  Better photos when they're painted. 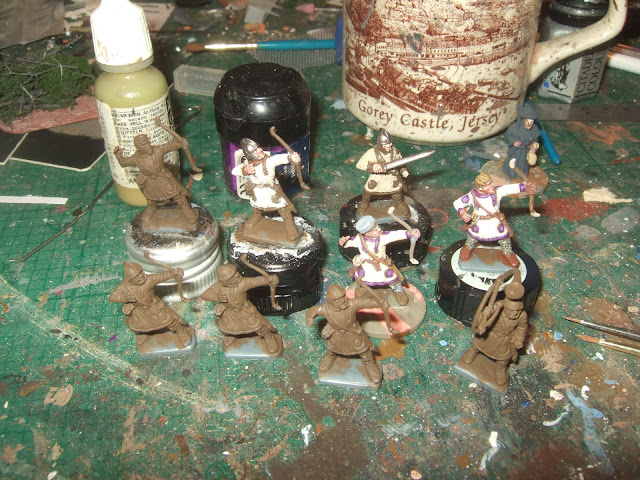 I've also been resurrecting these Hun Nobles (Foundry I think) that I got on the Bring and Buy at Vapnartak.  I'm repainting the horses from scratch but I'm managing to retain most of the original paintwork on the riders. 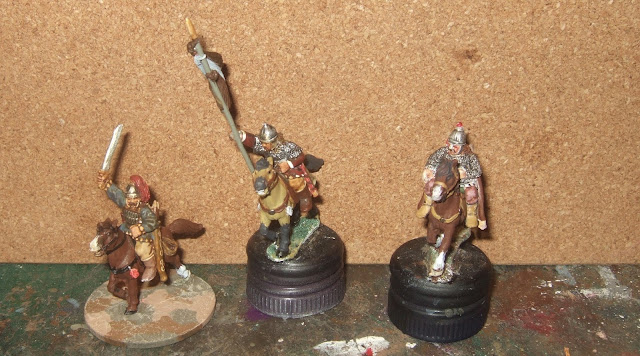 Posted by Counterpane at 1:45 PM 3 comments:

Moving on from the Soviets, here's my attempt at a supports list for the Germans in what they called the Tcherkassy pocket.  Again, any comments gratefully received: 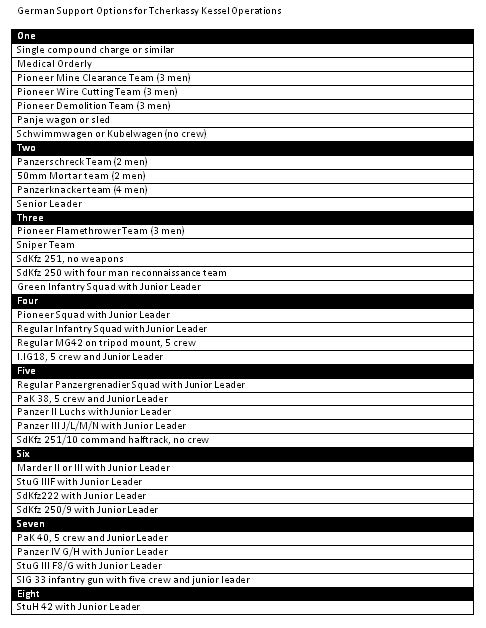 IS-2 In Service Dates

My little initial Googling on the in service dates for the IS-2 heavy tank suggested it could have been used at the end of the Korsun Pocket action.  However, Richard Naylor was kind enough to volunteer some feedback and suggested that the IS-2 wasn't in action yet. So I've had another dig through my books and internet sources.

Tanks encyclopaedia says:
"Their first action was in February 1944 at Korsun Chevchenkovski, Ukraine."

Flames of War agrees:
"It first saw combat in February 1944 during fighting around Korsun-Chevchenkovski pocket."

However, Militaryfactory.com says:
“First combat action was recorded in April of 1944 when IS-2, operating under the banners of the 11th and 72nd Independent Guards Heavy Tank Regiments, fared well against German Panther tanks - for all intents and purposes, the legacy of the Joseph Stalin tank had begun.”

The Archive Awareness blog has signal to Marshal Konev on the first arrival of IS-2s with 2nd Ukrainian Front, the start of which reads:
"USSR NKO
Military Council of Armoured and Mechanized Forces of the Red Army
April 1st, 1944#481904SS

To the commander of the 2nd Ukrainian Front, Marshal of the Soviet Union, comrade Konev.

The heavy IS and ISU-152 regiments sent to your disposal contain the first batch of tanks and SPGs of this type.Both the tanks and SPGs have a series of small technical omissions. In addition, there is not yet sufficient experience regarding their use and application in combat.”

Meanwhile Mitch Williamson's Soviet Hammer blog says:
"By the end of 1943, the Kirov Factory had produced a total of 102 IS-2 heavy tanks and they were used for the first time in February of 1944 at Korsun Shevkenskovsky."

Whilst at the same time he gives the production dates as "April 44 to June 45"!

I think I'll park this for now.  After all it's all irrelevant if no one brings an IS-2 model!
Posted by Counterpane at 2:59 PM 7 comments:

In a somewhat foolhardy moment I decided to run a large game of Chain of Command at Gauntlet in July.  Foolhardy because I've only ever played the rules solo up to now. The game is one I've wanted to do for years - German troops, largely infantry, escaping from the Tcherkassy (or as the Soviets called it Korsun) Pocket.

I've done a little research and I'm in the process of determining which types of support will be available to the two sides.  As usual with Chain of Command, the reinforcements are sorted into numbered lists.  So for example a platoon with six points of support could pick three items from list one and one from list three or any similar combination.

First up are the Soviets: 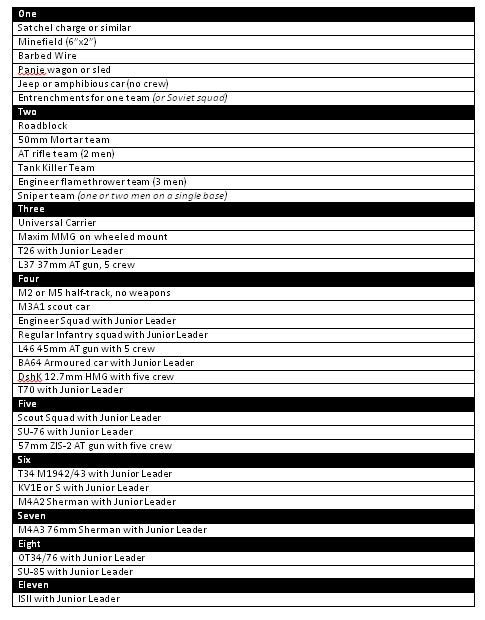 I'm reasonably confident of the appropriateness of all of these for Ukraine in February 1944 but if you know otherwise....
Posted by Counterpane at 11:45 AM 4 comments:

On Saturday I ran a game of Lion Rampant for Gus, Phil, Leo and Arthur.  Inspired by the Harrogate club's game at RAGE, I split my Swiss and Burgundian retinues into two and we played two "Defend the Indefensible" scenarios side by side.

Gus and Leo played the attacking Burgundians whilst Phil and Arthur looked after the Swiss who were trying to protect their bombard and their bear mascot. 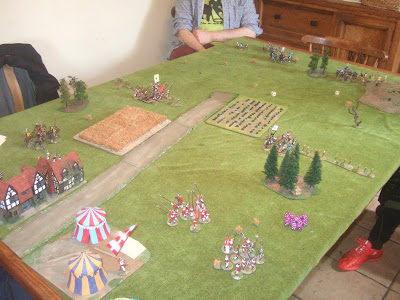 The idea was that the Swiss were besieging a Burgundian-held town off table to the east (far end of the table in the view above).  The Burgundians sally out to disrupt matters.


In the end the Burgundians had taken one objective but one of their retinues had taken too many casualties trying to capture the second.  In the end I called it a draw.  Lion Rampant was felt to be an enjoyable game; all the players being new to it on this occasion.

Posted by Counterpane at 3:45 PM No comments:

I had a business trip to London on Friday and managed to get time to pop into Orc's Nest in Covent Garden on the way home.  There I encountered Reaper's Bones range of plastic fantasy models for the first time.

I bought this, reckoning it would come in useful in future Pulp Alley games: 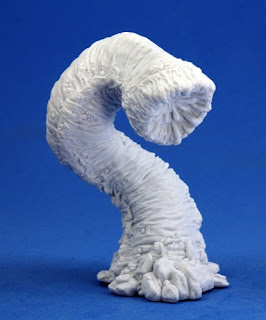 It's listed as a Great Worm.  It stands about 60mm tall at its highest point and it appears to be injection moulded in a slightly flexible material (a hard grade of polythene?).  At first glance I can't see any mould lines but the bottom is slightly uneven it will need gluing to a base.  For three quid it was pretty much irresistible.

I envisage using this as a terror, or perhaps a perilous area, is some future climactic episode.
Posted by Counterpane at 12:55 AM 2 comments: 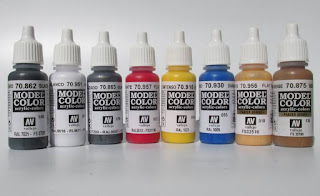 Just doing a bit of base-coating.  Is it very wrong that I paint winter Soviets in English Uniform and late-war British vehicles in Russian Uniform?

This is how I'm doing my 6mm horse and musket units at present. 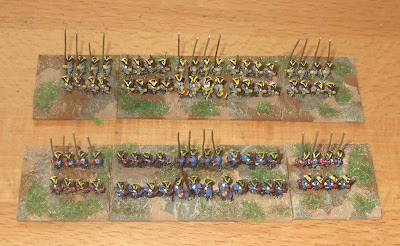 I started of with one 60mmx30mm element per battalion for Polemos:GNW but found that I can't get on with the rules.  I'm now planning on using either Black Powder or Maurice.  The pseudo-four-element approach should work for both.  It also saves two strips of figures per 120mm wide unit!

I've yet to attach flags but the front rank unit is the Semionovski Guards whilst the second is Sweden's Regiment.

On the Workbench - more Burgundians

I'm running another game of Lion Rampant in about ten days and I wanted to add another unit as we're likely to have more than one player a side.  Digging through the stash, I found I could make another unit of mounted men at arms.  I need to get one finished every two evenings.  As you can see, I'm under way... 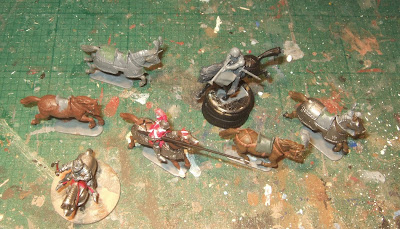 Most of the figures are from the Perry plastic men at arms box.  One of the exceptions is this guy: 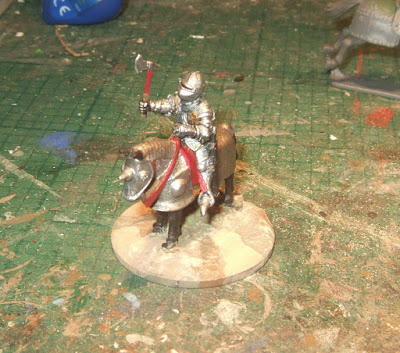 ...who's an old Foundry metal figure.  He had an open hand and a cast metal lance but I've lost count of the number of times hand and lance parted company so I've given him a plastic battle axe from the Perry plastics set.  He rides a rather small horse, manufacturer unknown; one of a lot I picked up cheap and riderless at Games of Liverpool about 35 years ago!  I've added a bit of extra height to the base so he won't look too out of place alongside the large Perry horses.

Finally we have a bit of a composite.  This started off life built straight from the Perry light cavalry box.  Unfortunately, though, he was captured and badly mauled by our puppy whilst he was still at the undercoat stage. He lost both arms, his head, and the horse's tail and left rear foot.  I've added a bare head from the men-at-arms box, arms with trumpet from the bill and bow set and a horse tail cut down from an Airfix 54mm figure.  I never throw such things away - you never know when they will come in handy.  I just need to sculpt the missing fetlock from Green Stuff and we're away. 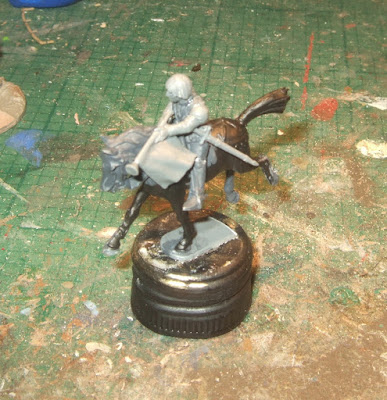 Posted by Counterpane at 3:38 PM 2 comments:

April stuff now off the workbench

I've made reasonable progress clearing April's figures from my workbench.

I previously showed the Fallschirmjaeger, and here's most of the rest:

The Hinchliffe MG34 teams were stain painted and then given a wash of Vallejo Sepia.   I may offload these guys on Ebay; they are bigger than most of my other 20mm figures and while they'll make a perfectly good MG company for Rapid Fire, they are along way short of the additional figures they'd need for Chain of Command. 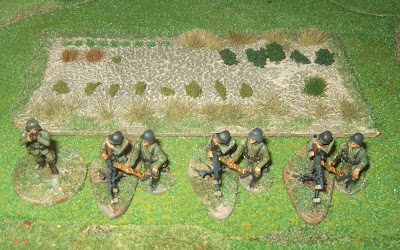 Then we have the repaired and upgraded figures.  The mid-late war SS officer (Dixon) on the left ad the early war SS machine gunner (FAA) in the middle both had broken ankles repaired and the joins strengthened with Green Stuff.    The FFA early war NCO on the right is just a rebase with a little tidying up of the paint-job. 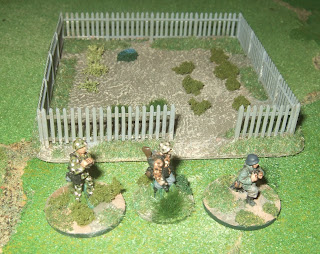 The two garden modules were prompted by looking at my recent Chain of Command games and thinking, "Those buildings don't look right standing on a green cloth; they need to be surrounded signs of habitation".  I then spotted a couple of gardens on the Perrys' game at RAGE and decided to see what I could do.  I think I'm going to make an effort to add plenty of these little details to my terrain collection in all three scales (6mm, 20mm and 28mm).

Posted by Counterpane at 1:40 AM No comments: