On Saturday I ran the latest game in my Song of Pavis mini-campaign.  This was Raid on Ogre Island, in which two parties of attackers (one a party recruited by the Cult of Pavis, the other a Storm Bull warband) disrupted a ceremony run by a Broo priest.

The action took place on an island in the River of Cradles within the Rig Rubble of Pavis.  In the picture below the Storm Bulls entered from the boat at top right and the Cult of Pavis from a raft just off-picture at bottom right.  The Broo (and their allies) began around the altar in the centre of the board. 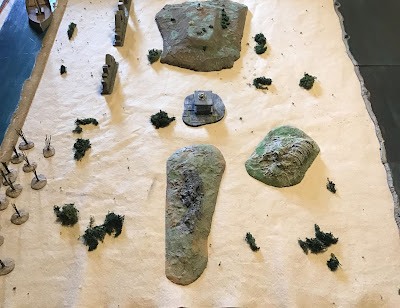 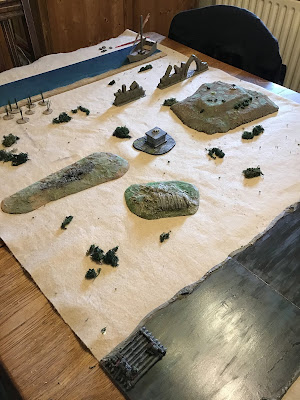 Mark Preston, in his first wargame, ran the Broos.  They were accompanied by a Scorpion-man and a Jack-o-Bear. 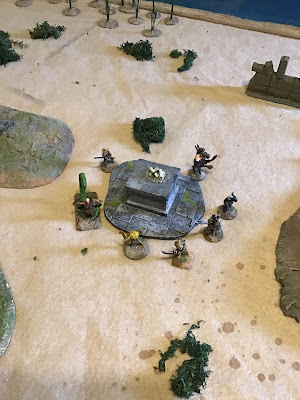 Jamie was in charge of the Cult of Pavis war party.  They were a mix of adventurer types including a Flintnail Dwarf and a Morokanth. 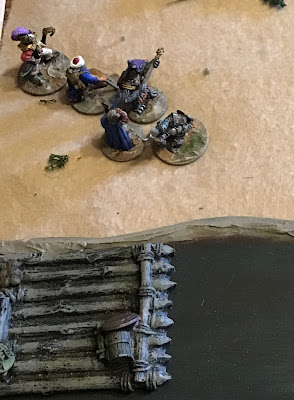 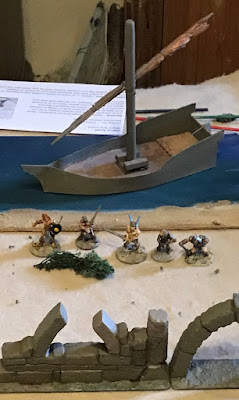 The objective of the Cult of Pavis was to recover a set of scrolls that the Broo leader was using to perform a ritual at the altar.  The Storm Bulls, of course, just wanted to "Kill Chaos!"  And the creatures of Chaos themselves?  Well they just wanted to survive and kill things!

The battle ended with all three of the warbands at about half strength.  Several figures had fled and a number lay dead.  The Storm Bulls had possession of the field but the Cult of Pavis had escaped with the mysterious scrolls.

As the Cult of Pavis are one of the three factions scoring points on the on-going campaign ladder (along with the Lunars and the Orlanthi Rebels) we rolled to see what had actually happened to their "dead".

Kiger and Hench both escaped despite wounds that will keep them out of the next action. Slaghammer the Dwarf was more fortunate; able to throw off his wounds, he will be back next time.

So with two skirmishes fought, both the Lunars and the Cult of Pavis have one win each.

Background:  I continue low-level planning for a future 18th century Woebetides skirmish game weekend.  I'm considering either Muskets and Tomahawks or Sharp Practice 2 as the rules of choice.  How each of them scales to a larger game will be crucial in the decision I guess.  Let's think first about unit activation. 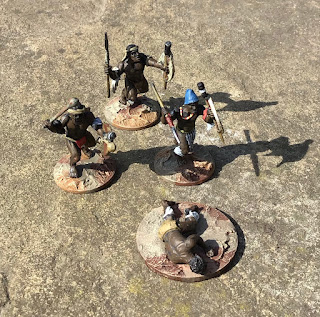 Sharp Practice 2 (henceforth SP) uses a card-driven system  where each card represents one Leader and where there are "flag" cards that enable special actions or troop enhancements.  The turn and is unpredictable with the "Tiffin" card ending the turn.  Unused flag cards of the right colour, when Tiffin is drawn, allow you to activate units that missed out by dint of their Leader's card not being drawn before the Tifffin card.

In an over-sized game like we plan, I'd need to make some additions to the standard card deck.  First the usual two colours (red and blue) would need to be supplemented by say green (the Arabs and pirates) and black (the natives).  Secondly, I think I'd add a second Tiffin card and only end the turn when both have been drawn; that way we increase the chance all players will get to do something active each turn.  We'd need to think carefully about how many Flag cards to include.  Too many and a single player's forces can dance around the opposition, too few and we risk players doing nothing for ages.

In considering how this might work I'm going to assume a twelve-player game in which each player has three Leaders.  There are four factions: English (red), French (blue), Natives (black) and Arabs/pirates (green).  Let's assume we're part way through and all units are on the table.

Black Flag - nothing happens immediately but the flag is available for a native player to pick up and use later.

Blue 1 - All three of the French players get to activate their own Leader 1 and his accompanying troops.  Richard's marines fire at some English militia, Mark's French settler militia march down a road, while Andy's naval landing party continue trying to repair the bridge at Al-Smut.

Green flag - nothing yet.

Black flag - the Native players now have three black flags on the table and any native player could pick them up and use them.  However, they seem to have agreed it's worth holding on for a fourth card and the chance of an additional activation this turn.

There have also been three consecutive flags so we need to roll a random event. As the last action was by Blue 1, we need to determine which Blue 1 was affected.  A quick die roll by the Umpire reveals that it's Mark's French settler militia so a movement random event is rolled for them and their Leader is revealed to have stepped in something unpleasant!

Green 2 - all the "Arab" players get to activate their second Leaders.  This includes the second in command of the European pirates.  He's currently attached to the same formation of pirates as the pirate chief so he can do nothing but remove Shock.  The pirates are under heavy fire from the English regulars and are beginning to waver so he quickly grabs the green flag card and uses it to remove an extra point of Shock this time.

The actually-Arab players are annoyed at missing out on the flag but they should have shouted sooner if they wanted it!  They make their moves and we move on....

Blue flag - the French have one at last!

Tiffin - because this is the first Tiffin card of the turn we ignore it.

… the turn continues for a bit with cards being drawn until...

Tiffin - the second one comes up and the main part of the turn ends.

At this point flag cards can be used to more as-yet-unactivated units. But how to determine who gets to use them? Perhaps one red card allows each British player to activate one previously unactivated unit?  That should reduce the arguments between players and reduce the chance that someone will be stuck with no opportunity to act for ages.

Muskets and Tomahawks also uses a card deck to drive unit activation and here again we'd need to extend the deck.  The system is different, though, in that a given card activates all the units of a particular type.

Let's try playing through a sample turn.  The first card is...

French Regulars - All of the French players now check their rosters to see if they have any Regular troops.  This might include the army or marines.  All Regulars cards give two actions which the relevant units take now.

British Militia - Likewise any British player who has militia troops in his force may now activate them.  Will has two units of militia raised from the staff and hangers-on at the Fort James trading factory and they now get a single action.

Arab Irregulars - The Arab and pirate players can now activate all their irregular forces.  Given that the Arabs are all irregulars apart from the Wali of Smut's personal guard, this could take a little while.  Likewise, "irregular" sounds like a spot on description for your typical pirate so they all get one action too.

British Civilians - It's now the umpire's turn to move the civilians dotted around the table.

Natives - all the Woebetideus are classified the same and they all get one action now.

Natives - there are four Natives cards in the deck so not that surprising to get two consecutively...

Event 1 - We decided before the game that a random event would be rolled if Event 1 was the first event card (there are three) drawn in a turn.  It was.  We roll two consecutive d6 and get 2,1.  This random event allows one player to place an area of extremely bad going.  Fine; we can just identify a player at random by rolling a D12.

French Artillery - the swivel gun on the ramparts of Fort Charles gets to fire and the naval party can continue pulling their gun up the beach.

... and so on until all of the cards have been drawn from the deck.


So, what difference is there between the two set of rules as far as activation is concerned?

If we give each player the same number of Leaders, they'll each be activating some of their troops about a quarter of the time in Sharp Practice.  This is probably OK.  The problem (if it is such) that arises with Sharp Practice is with the Tiffin card.  Because the end of the turn is unpredictable, it's possible for a player to not get to activate any of his forces in a turn.  And the random variation of cards being what it is, this may well happen more than once in a game.

With Muskets and Tomahawks, at least every player gets to activate all of his trips in a turn.  There is however, an issue with the distribution of activity.  Let's take two British players.

Will, commanding the detachment of McNally's Regiment of Foot in the Woebetides, has six units of Regulars whilst Tom has a single unit of the regulars, three groups of Militia formed from the civilians at the trading factory, and a small group of cavalry (classed as Irregulars).  Will will get to activate his figures twice during the turn for a total of four actions (two for each of the two British Regulars cards in the deck).

Tom, meanwhile, gets involved in the game nine times during each turn!  His Regulars activate with two actions each on two cards - just like Will's guys.  His Militia have three cards in the deck and each gives one action at a time.  Finally, his cavalry get four single-action cards each turn.

Is it a problem that Will gets only two, very intense periods of activity over the course of a turn?

I'd love to hear your views on this.