Review of the Painting Year

As August draws to a close we reach the end of my painting year.  As I’ve said before, for historical reasons I keep track of all the painting and purchasing I’ve done starting from 1st September each year.  This year has been the year of reducing the lead-pile.  For the first time I have painted more than I have purchased in every category!

In the category of “buildings and terrain modules” I’ve bought or acquired 15 pieces and painted 54.  This is a pretty broad category including everything from 28mm scale buildings to individually based trees and game markers but still I’m pretty pleased with the progress. 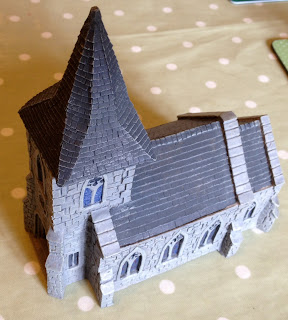 I’ve painted twenty two 6mm scale vehicles and only added twenty.  Fifty nine infantry, cavalry and artillery units were finished.  How many I added to the pile is harder to judge because I haven’t properly organised the Baccus Poles into an army but I reckon 25 units’ worth is a good estimate.

While we’re on 6mm scale, the preparations for Crisis Point 2 also saw the completion of three aircraft and a ship (the USS Burton Island).

The 20mm scale (mostly plastic) pile has seen some good progress too.  43 figures and two guns or vehicles completed and only 10 added figures.  I’m ignoring the Big Box of Delights because although I took quite a few figures from it, I also added some unwanted figures to it.  If I don’t think too hard about the quantities I can convince myself that the whole thing was a broadly neutral transaction. 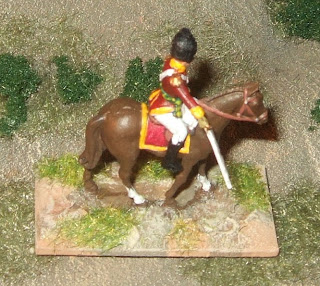 And finally we have 28mm scale.  This has been a secondary scale for me in the past but the discovery of some fun skirmish rules (Song of Blades and Heroes, .45 Adventure, and Pulp Alley) has led to a resurgence of interest.  32 figures added, 35 painted. 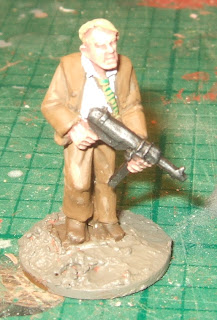 Another thing I did this year was to create a list of things I wanted to get done in terms of gaming but I’ll leave that to a future post.

Posted by Counterpane at 1:16 AM 2 comments:

One source of inspiration for my pulp gaming is the work of Sax Rohmer.  His Fu-Manchu books, somewhat derivative of Conan-Doyle and by modern standards often straying into racist territory, make great fodder for gaming scenarios.

So I was pleased to come across a copy of the first book in Whitby's excellent Endeavour Books. 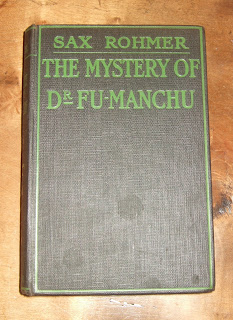 For a fiver I was going to buy it anyway but then I spotted the fly-leaf: 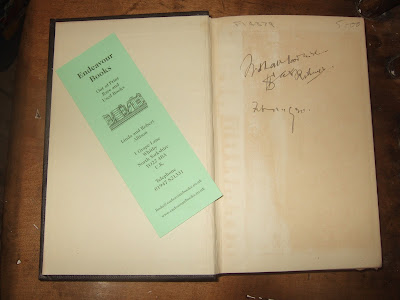 Pretty sure that's an author's inscription.  Nice.
Posted by Counterpane at 2:13 PM 2 comments:

Email ThisBlogThis!Share to TwitterShare to FacebookShare to Pinterest
Labels: Pulp


Millie (aged 10) played her first miniatures game yesterday when she thrashed me at Pulp Alley.  We played Trail of Clues, one of the standard scenarios in the rulebook.  In this scenario players must gather plot points one at a time, leading up to the main plot point which in our case was a mysterious shaft in the Mexican desert.

Early in the action Dr Sen managed to locate a hidden cache of climbing gear (plot point 1) and then shortly afterwards Eleanor found a mysterious hatchling (plot point 2).  Both players placed further plot points.  I placed the painted boulder and Millie placed a local informant.  We then raced to these new locations.

A couple of fierce gun battles broke out and Millie was sufficiently successful in both that she was able to understand the message of the painted rain god and to successfully interrogate the sleepy local.

She then proceeded to place the final plot point where I couldn’t reach it.  With the timely play of her option to extend the game by one turn she managed to gain access to the mysterious shaft and win the game by six victory points to one!

I'm off looking after two of the kids this week (Jamie's spending the week at an archaeological dig) and today we took a trip to Halifax.  We didn't do anything much; we just strolled around the town centre.  However, I did find some interesting bargains in Toymaster and an Oxfam shop. 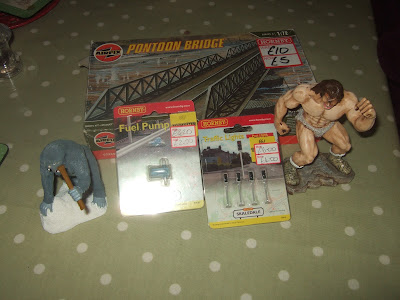 The Airfix pontoon bridge for a fiver was a nice find.  It'll probably end up being used in Tcherbevan for next year's Crisis Point: Andreivia game (as will the Hornby fuel pump and traffic lights). 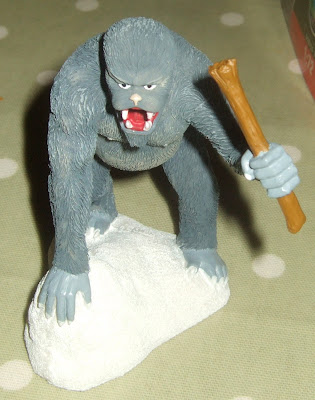 The giant ape is a little over 10cm tall.  With a better paint job he'll make a great feature for a Pulp Alley game. 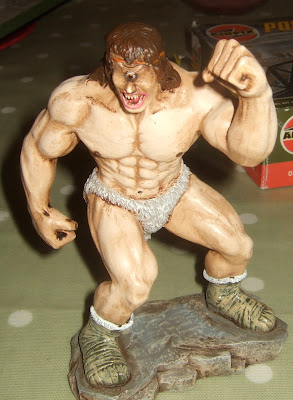 The cyclops is even bigger.  I took one look and thought, "That's a Huge creature in Song of Blades and Heroes terms.  For less than three quid he's a must have.

Altogether I've come back with some really useful stuff for less than twenty pounds. Not bad.

Posted by Counterpane at 9:25 AM 3 comments:

I photographed the latest batch of Pulp figures on the stone steps in our front yard.  They provide a nice, neutral background and get plenty of light.  This time, however, I didn't only get light. 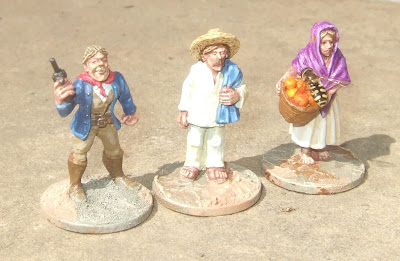 The hoverfly has obviously been attracted by the superbly realistic paint job I did on the basket of oranges.  The result is a strangely disturbing image.

Just before heading off to Cumbria for a week's holiday with friends I downloaded a new (to me) set of pulp skirmish rules.  Pulp Alley looks like being very popular with my group of players.  I'll write more about the rules later but for now here are the latest figures I've painted for use with the game.

Posted by Counterpane at 12:09 AM No comments:

Well, our Internet connectivity problems persist.  British Telecom insisted they could get us between 1 and 3.5 Mbps connection speed through their lines but have now failed to get us any connection at all in the two weeks since we took delivery off their “Home Hub”.  Meanwhile T-Mobile’s signal has dropped and I can only get a decent signal by taking the Mac upstairs to an inconvenient location in our bedroom or by perching it precariously on the window ledge in the study.  Anyway, until one of the cats knocks the computer flying, here’s an update on gaming stuff in the Land of Counterpane.

Early July saw Jamie and I over in Chester for our annual trip to Gauntlet, the small show run by Deeside Defenders.  This year we weren’t contributing to the SOTCW game other than as players.  Pete Jones and Will McNally put on three games over the weekend and Jamie and I played in two of them.

Jamie ran some attacking Italians whilst I had elements of a German Panzer Division.  Will, Pete and another local (sorry, can’t remember the name) ran British and American forces and a small number of ex-Vichy French holding two villages.

The French included some wonderfully characterful Foreign Legion who were paint conversions of the original 1960s Airfix Foreign Legion figures (the type before the ones I’m converting into early WW1 French infantry). This was very reminiscent of the late John Sanders’ Eighth Army models from the Airfix Guide and old issues of Airfix Magazine.

As so often when called upon to attack, I think I was rather too thorough in clearing the first line of defences and didn’t push forward aggressively enough.  I managed to clear the French from the First village but didn’t get forward quickly enough to prevent the Americans giving my Italian partners a bloody nose. 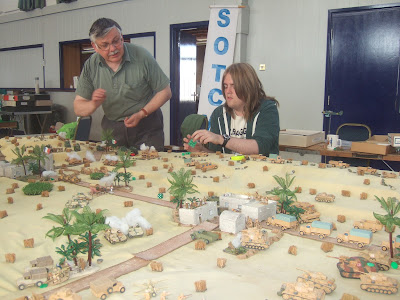 On Sunday morning Jamie and I decided to play a little Song of Blades and Heroes.  On both occasions a party of Wolf Pirates was defeated by the Chaos Gang.


Sunday afternoon saw us dragged back to Will’s table to play Longstop Hill (another Tunisian action), this time using the Bolt Action rules. 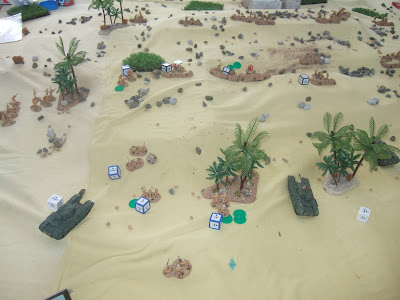 I can’t say I enjoyed this one hugely.  Not sure why but I didn’t find Bolt Action did it for me.  I found the use of dice as markers intrusive, which is odd because I live with it for Cold War Commander.

Posted by Counterpane at 3:37 AM 2 comments: