The Mexicans, a stock taking

At the beginning of March I decided to have a go at building Sharp Practice forces for the Maximilian Adventure in 28mm scale.   So how far have I got by September?  The answer is quite a pleasing distance.

I'm not going to count my Mexican peons as they were figures I painted years ago for possible use in a wild west or pulp skirmish. 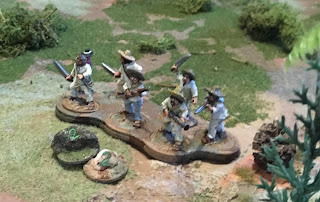 So what's new since March?

First up was this formation of contra-guerillas.  They are mostly conversions from Perry plastic zouaves but also a few Artizan "Plains Infantry".

That's two groups of Turco line infantry and one of skirmishers, an NCO and a drummer from the plastics and an officer who's a Foundry metal figure.

On the Republican/Liberal side we get these cavalry also converted from Perry plastics, in this case the American Civil War Cavalry box. 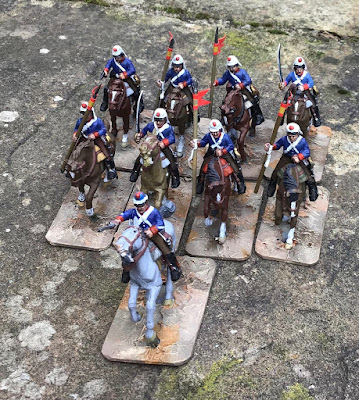 Moving on to Foundry metals I've put together these two groups of state militia:

Moving back to plastics, so far I've produced one group of regulars from the Perry ACW Infantry box: 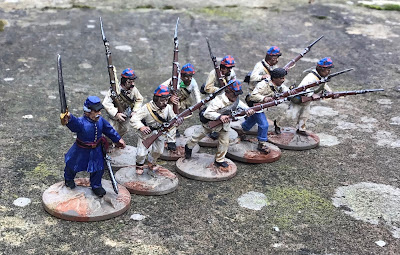 There are plenty figures left in the box, so I'll have a few more groups of these eventually.

Finally for now, one of the nice things about Sharp Practice is that it gives you the chance to create odd-ball figures in support roles.  Medics (called Physics in the rules) can assist when officers are wounded.  My 1860s Physic is this doctor... 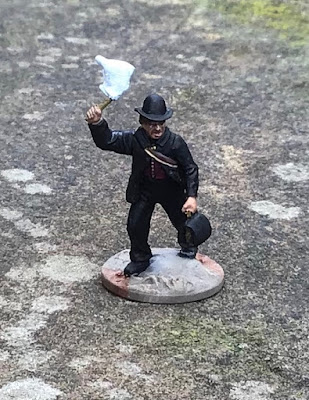 He's made from parts from the Perry plastic ACW infantry box.  The right arm is that of a drummer.  His improvised white flag and his medical bag are made from Green Stuff.  They don't really show in this pic but I'm quite pleased with his red waistcoat and the brass fittings on the bag.

Most of the figures need their bases flocking.  This'll happen before they see action in public.
Posted by Counterpane at 2:55 AM 2 comments:

More progress on the sprue-skeleton trees.

I've looped the bases with my usual filler and paint mix and added a base coat of GW Storm Vermin Fur: 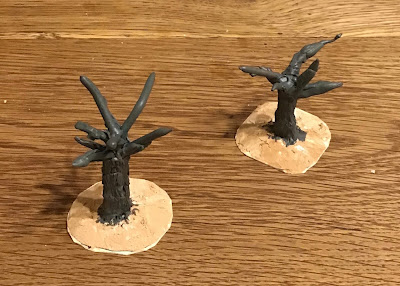 The next step was to dry brush the trunks in successively paler (and more lightly brushed) colours (Vallejo Grey Green and Iraqi Sand).

And then I painted the bases in a couple of shades of brown.  They're still wet here: 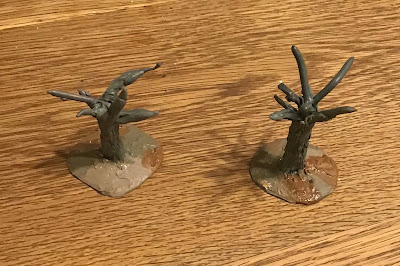 On Saturday, Richard P, Phil, Mark, Jamie and I played a game of Sixth Fleet in the side room at the Royal Hotel in Dungworth.  The idea was to generate ideas for games at Crisis Point in the Spring of 2019. 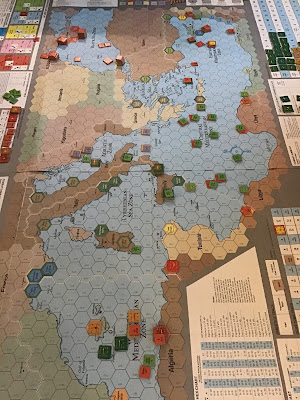 We played scenario 13 - The Invasion of Western Europe.  The sides were as follows:

As we were playing with “moderate” level preparedness there were two US carrier battlegroups. The Nimitz group was at Malta while the Kennedy group was cruising off Minorca.  The Soviets put their free-set-up group (which includes the aircraft carrier Minsk and the cruiser Kirov) off Cyprus whilst the majority of their submarine force was in the central Mediterranean.

The game began with Syrian and Israeli aircraft clashing in the skies over Lebanon. Soviet naval infantry from the amphibious assault ship Vilkov moved into Beirut.  At about the same time the Soviet submarine Bytosh landed Naval Spetsnaz at Homs in Libya.

American anti-submarine operations were successful in sinking the Soviet submarine Shuya in the Atlantic.

In the afternoon, Soviet aircraft transmitted the Balkans to sink the US task force at Maddalena as well as the US destroyer Comte de Grasse.

The Americans did get some revenge, though, damaging several Soviet subs.

Night on the first day saw further very effective attacks of US shipping by the massive Crimean air fleets.  In response the Nimitz air wing bombed Algiers damaging several aircraft on the ground. 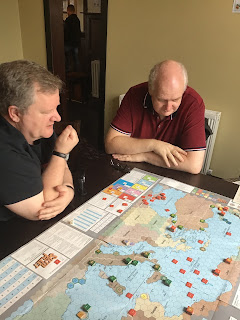 Israel launched an attack on Lebanon landing paratroopers in and around Beirut to oppose the Soviet invasion.

The Soviets now launched a massive attack of Istanbul with two regiments of airborne troops.

In the afternoon the US career groups began anti-submarine operations sinking the Tyumen and the Drabov in the central Med.

The night of day two continuing ASW operations.  The US and Turkish navies managed to sink the Perm, Ivdel, and Lipitsy.  In addition, aircraft from USS Kennedy sank almost the entire Libyan navy, although a single Libyan missile did manage to penetrate the American defences and sink the destroyer USS Cushing. 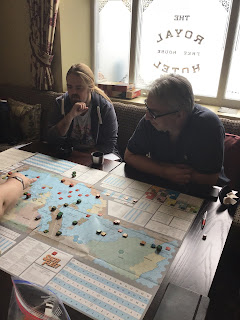 On day three the Americans landed airborne troops at Homs and Tobruq in Libya whilst the Soviets reinforced their forces in Istanbul.

So what does all this mean for our games at Crisis Point in spring 2019?

Anyone wanting to do land combat can choose from:

Air warfare fans could have great fun with the clashes between the Israeli air force and its Syrian and Soviet counterparts.  There’s also plenty of scope for fighting between US Navy F-14s and just about anyone!

The question, then, is who’s inspired to put on a game based on this?
Posted by Counterpane at 1:09 PM 6 comments:

Email ThisBlogThis!Share to TwitterShare to FacebookShare to Pinterest
Labels: Boardgames

I've made trees before now using the twisted-wire-skeleton method demonstrated by Mel the Terrain Tutor but I'm out of suitable wire at the moment so I thought I'd try an alternative method.

Years (nay decades) ago I remember one of the Blue Peter presenters (probably John Noakes; it always turns out to have been John Noakes) making intricate models of winter trees by manipulating and welding together rods of semi-molten glass.  It occurred to me that I could do something similar.

After half an hour with some plastic sprue, liquid polystyrene cement and a candle I had: 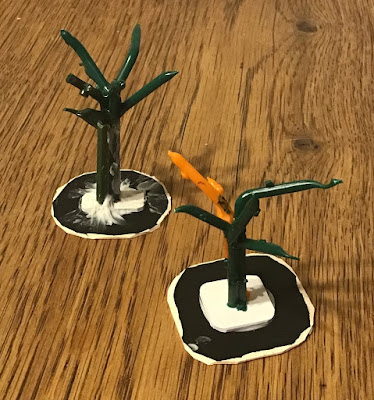 I've cemented each tree skeleton to a piece of thick plasticard and then glued the plasticard to a larger cardboard base.

After they'd had a chance to set, I started applying Green Stuff bark to the trunk of one of them: 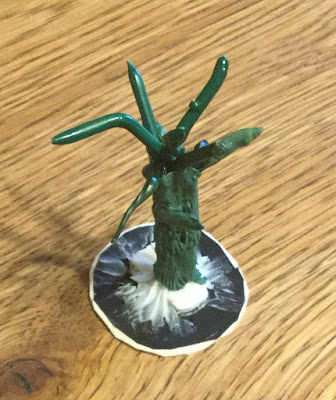 Not a very clear picture but I think it will look OK when it's painted.  I've only bothered with texturing the lower parts.  The upper branches will be covered by foliage.

The next stage will be to paint and then attach the foliage.  Of which more later.
Posted by Counterpane at 4:16 AM 2 comments:

On Monday, Jamie and I had our first proper game of Sharp Practice 2 using my developing Maximilian Adventure forces.  I designed a scenario based on Liberal guerrillas raiding a railway construction camp to steal the workers' tools and burn their tents.

The Liberal force was set up to use all of the figures I currently have available.  This gave me a group of cavalry, two of skirmishers, and one of line infantry.  All were armed with rifled muskets with exception of the cavalry who have lances.

The French/Conservative detachment had two units of Turcos (Tirailleurs Algeriens) as line infantry and one as skirmish troops, and two units of contra-guerrillas.

The table was fairly simple with a few scattered trees and a workers camp (Renedra tents and a Warbases wagon) near the middle. I included a wandering dog and a grazing horse as at least one of the possible random events involves rampaging animals (if any are nearby).  For simplicity, I treated the woods as blocking line of sight and being bad going for movement purposes.  The camp didn't affect movement of line of sight.

The round, green tent at the centre of the camp acted as a secondary deployment point for the Liberals, who are already rampaging through the camp at the start of the action.  The main deployment points for the two sides were at opposite ends of the table. 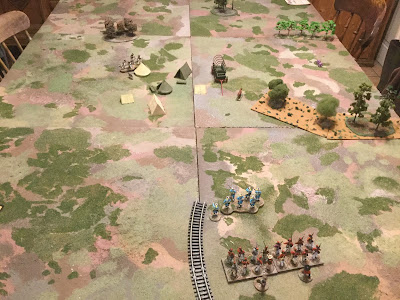 The action began with my contra-guerrillas deploying in line, screened by the Turco skirmishers. 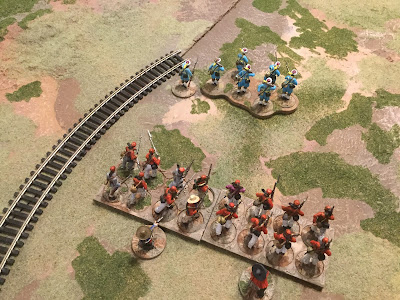 Jamie's Liberals initially had one unit of skirmishers in the camp and pretty soon they had a tent alight. 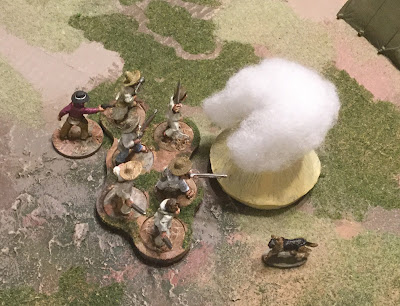 Meanwhile, the French started to arrive in numbers.  An open column of Turcos arrived on the right of the Contra-Guerilla line... 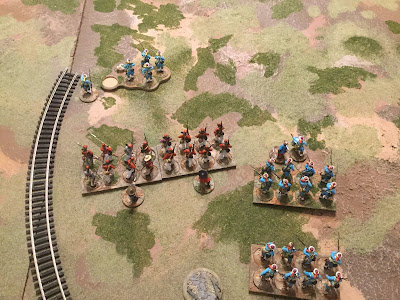 But the Liberals, it emerged, had cavalry and a small group of regulars! 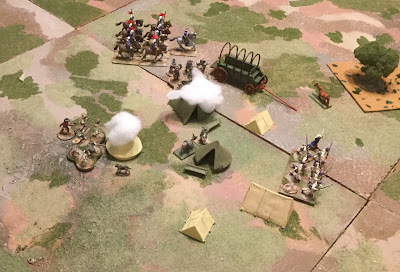 The cavalry moved over to the left.  They would have to move through woods to attack the French but still they posed a threat. 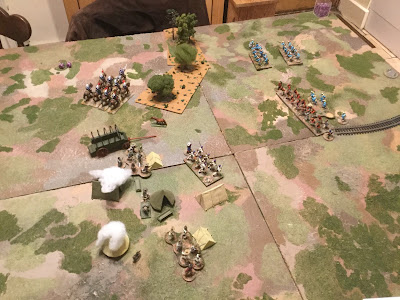 As more and more tents were fired, the Contra-guerillas maintained a wicked fire at the guerrilla skirmishers in the camp.  Kills and Shock were beginning to mount up on the Liberals. 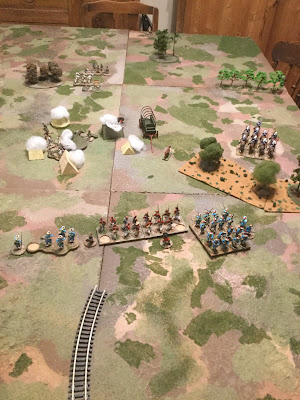 Knowing that enemy cavalry had disappeared behind the trees to their front, the Turcos formed square. 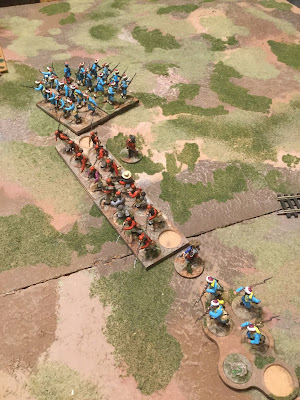 By now the Liberals had fired the last of the workers' tents but Shock was beginning to build up.  One group fled leaving their wounded officer (the man known by the nom-de-guerre of El Mosquito) lying on the field. 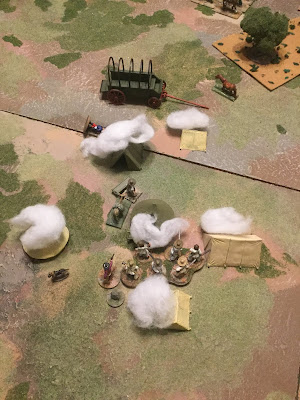 Soon guerrillas and regulars were routed. 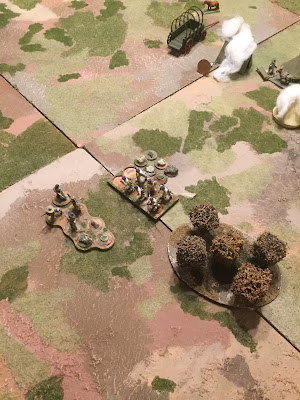 Jamie chose to turn his cavalry around and extract them safely with the rest of his force... 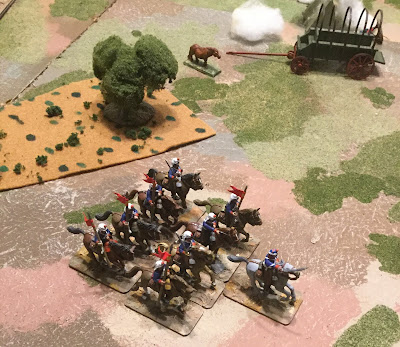 ... leaving the French in control of the field. 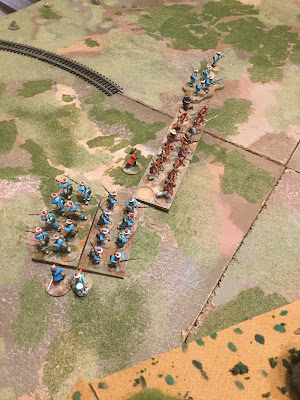 Posted by Counterpane at 2:54 AM 4 comments: