Ron and I played a nice little game of Chain of Command on Saturday.  I've been wanting to have another go at those rules for a while and I've also been reading Patrick Delaforce's book on the 11th Armoured Division (the formation in which Delaforce himself served as a junior officer in 13 RHA).

Not knowing how many players I'd end up with, I selected 8th Bn, The Rifle Brigade's action at Stolzenau in the early days of April 1945.  This would allow me to field enough toys to be able to do a four player Big CoC game if necessary.  These were the Briefings I ended up with:


British Briefing:
Stolzenau, Westphalia, 6th April 1945.  British forces are pushing into northern Germany. If they can reach the Baltic Sea they will cut Germany in half. Only two major waterways now remain to be crossed; the Weser and then the Elbe.  In some places the advance is almost unopposed, in others the Germans fight desperately for every yard of ground.
11th Armoured Division can claim to be one of the most effective formations in what has now been designated British Army of the Rhine. The Division’s Motor Battalion, 8th Battalion the Rifle Brigade (8RB) has crossed the Weser in assault boats and established a shallow bridgehead around the shattered highway bridge at Stolzenau.  With no ability to ferry across vehicles, the Rifles must hold their shallow bridgehead while Royal Engineers try to build a pontoon bridge behind them under shellfire and occasional air attack.
German Briefing:
Stolzenau, Westfalen, 6. April 1945. For two weeks the highway through Stolzenau was choked with soldiers, alone or in groups, POWs of various nations with their guards, foreign workers and people fleeing before the advancing Englanders. All of them express only one desire, to go home.
Yesterday, engineers of Pionier-Sperr-Regiment 1100 blew up the highway bridge over the Weser.  Last night the British crossed the river with light forces and are holding the river bank either side of the wrecked crossing.  Your platoon from SS-Ausbildung-und-Ersatz-Bataillon 12 Hitler Jugend is ordered to destroy the enemy force north of the bridge.

I gave Ron the choice of sides and he decided to be the Germans.  I'd rolled a 3 on 2D6 for the level of support! Ron would be running a green German infantry (not Panzergrenadier) platoon with six points of support and I'd have an average British motor platoon with a measly one point of support!

The battlefield was planned by reference to Google maps and looks like this: 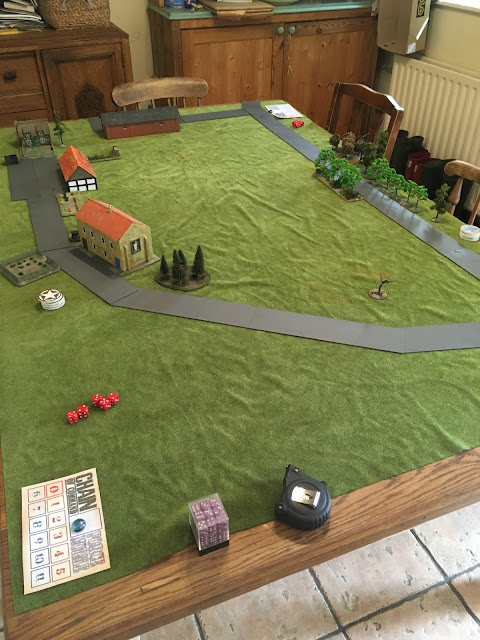 The Weser is off the left-hand edge.  After the patrol phase the British ended up with Jump Off Points in the brick-built shed, the black-and-white farmhouse and the semi-detached pair of yellow-rendered cottages.  As per history, the Germans would be attacking across dangerously open ground.

I didn't know what Ron would pick as his supports and I was concerned that I could be up against as many as two armoured vehicles with only a single PIAT to hold them off.  I decided to go for a sticky bomb in case that happened.

And happen it did!  Ron's Hitler Jugend would be backed up by a PzKfWg III Ausf L: 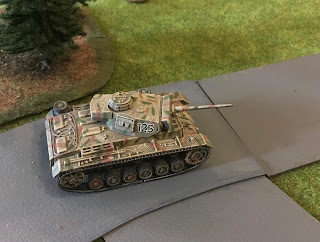 The game began quietly.  With the higher Force Morale (9 to Ron's 8) I took the first phase but contented myself with waiting to see what developed.  Ron then got a flurry of repeat phases (three I think) and began to push forward two sections towards my extreme right flank. 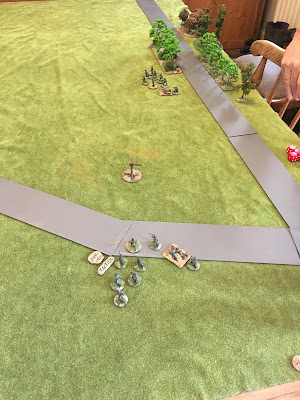 A lucky movement roll could have seen a German section threaten the Jump Off Point in the yellow cottages so I was forced to deploy Corporal Wiggins' section in the clump of trees alongside the cottages (there being no windows in the end wall). 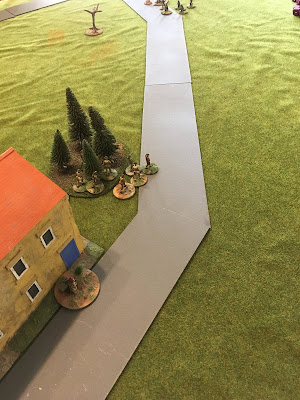 I also deployed my 2" mortar team in the garden over the road. 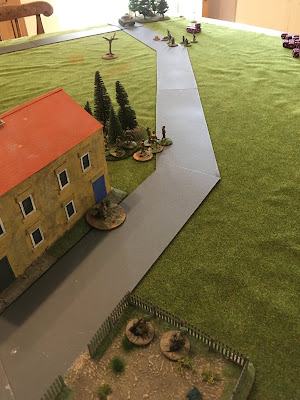 With an MG42 and a larger rifle team the Germans would have had the advantage in the firefight but their green troops were less skilled in using cover (Green troops are easier to hit in CoC) and, assisted by the mortar team using their entire allocation of HE bombs, the British section was able to nullify the threat from Ron's left flank section. 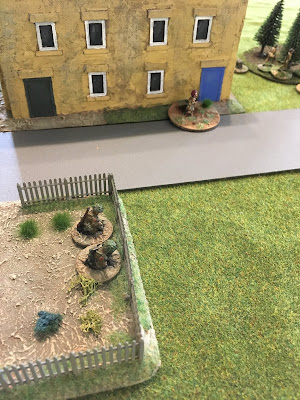 At this point the German armour put in an appearance and started to "brass up" Wiggins' section.  Ron pretty quickly decided that firing both hull and coaxial MGs was better than the fairly ineffectual 50mm main gun's HE. 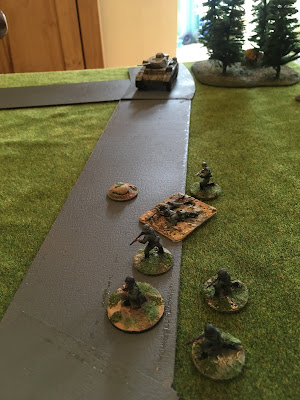 As this this was going on Ron decided to launch his second section directly towards Wiggins' weakened section in the trees.  This was risky as I had Corporal Smith's section in the yellow cottages.  Surely I'd get in a couple of rounds of firing as a German assault came on?

Well, no, not if the Germans run really fast... 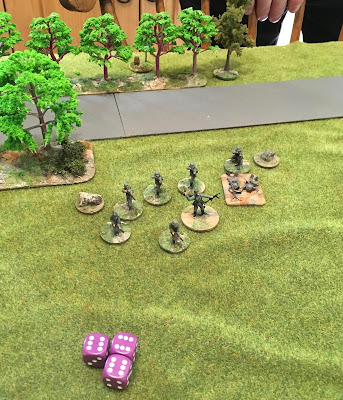 With an impressive sprint, the Germans crossed the open ground and there was fierce hand-to-hand fighting in the little clump of trees.

Four Germans and three British were casualties and the Germans were forced back.  Both sections were reduced beyond the point of effectiveness and both section leaders were wounded.  A burst of small-arms fire from the British section in the cottages completed the job and Ron's Force Morale dropped to four whilst mine was on seven.

Ron now decided the time had come to push forward with his tank.  With only two small sections left I wasn't confident of victory even when further long-range fire wiped out a German MG team and reduced his Force Morale again to just three.

I deployed the PIAT team into the, now thoroughly blood-soaked, trees.  One shot sailed just over the top before a second stuck  glancing blow that ricocheted off the German armour.  The third shot struck firmly but failed to penetrate.  The tank crew must have been rattled, though, as they immediately withdrew a few yards back up the road. 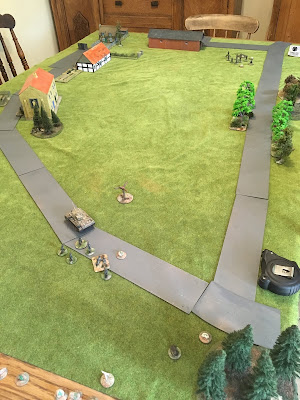 All this time, Ron had been cautiously edging his third section in a right flanking manoeuvre to ty and get behind the red-brick shed.  This would potentially threaten my undefended left flank Jump Off Point. 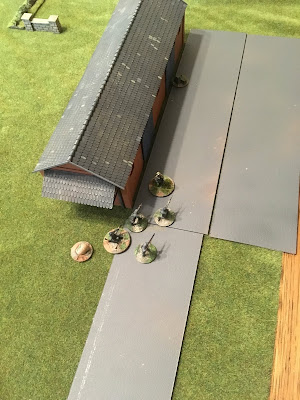 They had been under fire all the time, however, from the British section in the black and white farmhouse.  Shock was building up and slowing their advance.  At a key moment, an unlucky burst of fire saw the two remaining members of their MG team killed.  Ron's force morale dropped to two and he decided that it was time to withdraw.

At the end I still wasn't confident that I would have won.  Yes, with only two remaining command dice it was difficult for Ron to keep his tank and his remaining section moving forward but with only two small sections left I was going to have to redeploy significantly to meet the German threat.

The big bonus was that my PIAT team had managed to find some more ammunition at the Jump Off Point.  If I got lucky and took out the tank I'd probably scrape a win.

All in all great fun and it was nice to play rather than umpire for a change.  Must do more Chain of Command.

Where did you get that tile?

Something to do whilst watching the World Cup... 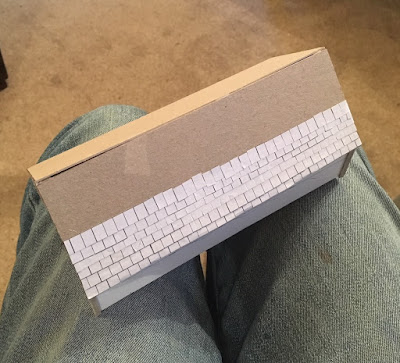 Very therapeutic. When it's finished it'll be a Westphalian farmhouse﻿ for late WW2 Chain of Command games.
Posted by Counterpane at 2:22 AM 2 comments:

Somewhere in the Med

I went over to Chris's house last night to pay a first game of What a Tanker!  Four of us took a tanks each to fight over Chris's very nice Mediterranean terrain.  I had a M3 Honey, Simon a Valentine Mk2, Chris a Marder II, and John a Panzer II. 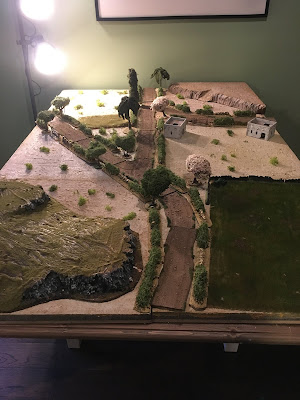 We picked up the rules pretty quickly (Chris and, I think, John had played before at Partizan) though I threw a few sabots into the machinery by assuming some rules were the same as Chain of Command. 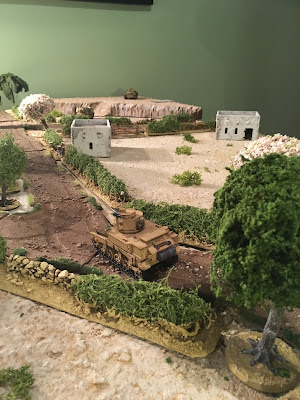 There's only so much you can do, tactically, with just four units on the table so the game was pretty much about finding good firing positions.  This wasn't easy to do in such dense terrain. 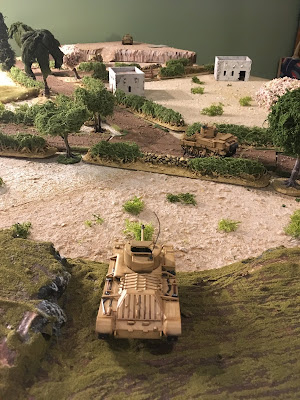 In the end the Marder's big, powerful gun was just too much for the British.  First my Honey was knocked out... 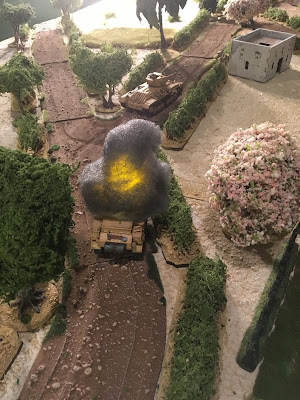 And then Simon's Valentine was surrounded and hit in the flank at point blank range with inevitable results. 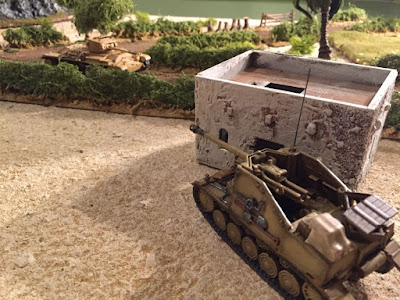 It was a fun game and I'll certainly play What A Tanker again given the chance but I wasn't so enthused that I'll be dashing out to buy myself a copy.

Posted by Counterpane at 12:50 AM No comments: