Winged Hussars at the Armouries Today

Jamie and I met up in Leeds to see the Winged Hussars special event at the Royal Armouries today.

There was a very entertaining presentation about the charged of the Polish hussars at Siege of Vienna by an English re-enactor... 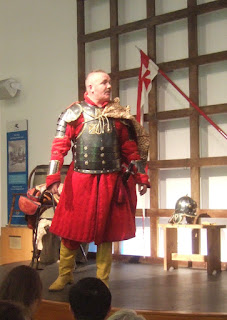 ... followed by a display of remarkable horsemanship by a Polish group. 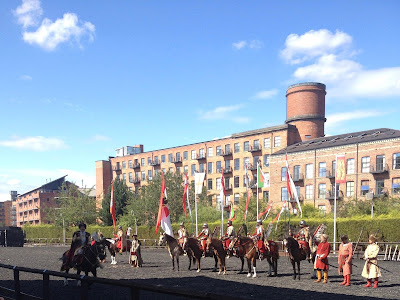 Apart from the skill of the riders at controlling their (locally supplied) horses, I was struck by the way they were able to aim so precisely with the three-metre long lances.  At pretty much a full gallop, with laces crouched and leaning forward in the saddle they were able to keep the lance rock steady and with its point aimed exactly and human-head-sized targets from twenty or thirty yards out.   Brilliant stuff and well worth the entry fee! 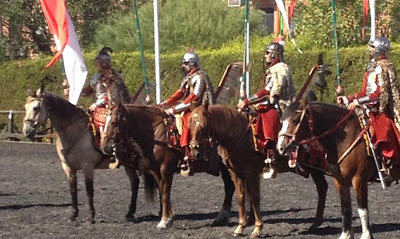 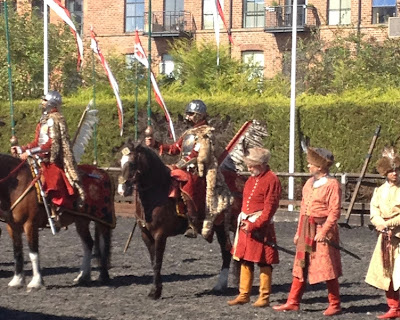 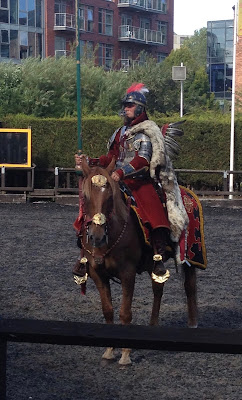 Posted by Counterpane at 3:10 PM 2 comments:

Andy, Chris, and Arthur came over today and we had great fun determining the names and characters of the officers of the Borsetshire Regiment and particular of the Regiment's Light Company.  All in all they seem to be a pretty unsavoury lot and I don't think it will be a happy mess, at least until some of the current crop are weeded out by the exigencies of warfare.

After that we played what will hopefully be the first of a series of games following the Borsetshires through the Peninsular War.

The action was based on the clash between Sir Arthur Wellesley's advanced guard and the French rearguard on the even of the battle of Rolica in August 1808.  Andy played a small (probably too small) swarm of French voltigeurs whilst Chris took on the role of Lt Villiers of the Borsetshires.  Arthur played the role of Sergeant Goodison, whose dozen men of the 95th Rifles were on the Borsetshires' flank. 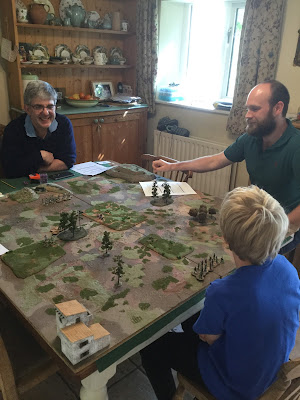 Andy was tasked with holding off the British whilst gunners and drivers tried to empty a tightly
wedged wagon said to contain the General de Brigade's collection of stolen statuary. 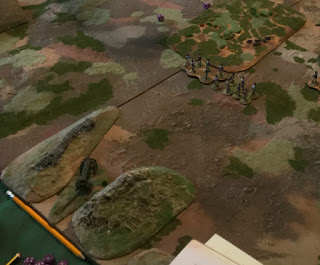 First to arrive on the table was a small group of voltigeurs under Sergeant Jarier.  Almost immediately they were in trouble. It seemed their water discipline had been poor and it became apparent that, parched, they were lagging behind their expected pace under the hot Spanish sun.

Worse yet, three of the men thought they had spotted a Spanish señorita entering the building in the corner of the battlefield.  Keen to 'present their cards' they set off for the farmhouse leaving Sergeant Jarier with only three men.

Jarier set off after his men and caught them up as they crossed a small field... 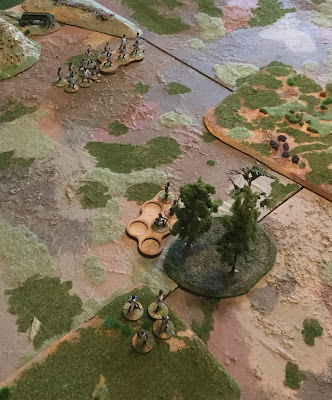 ... as Jarier began to remonstrate with his men, a fusillade of shots rang out as Sergeant Goodison's riflemen found their range. At once Jarier fell wounded and the three men decided that the farm house was probably a good place to hide too. 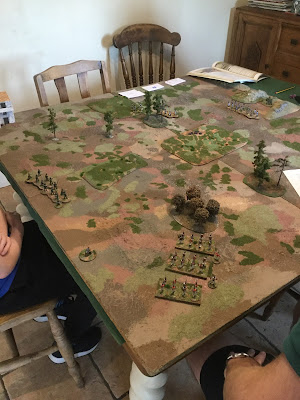 By now the rest of the French force, two more groups of voltigeurs under Lt Delaborde had arrived in the centre.  There was some exchange of shots with Goodison's Rifles. 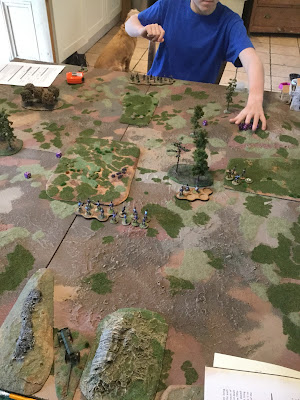 Keen to exhort his men to greater deeds, Goodison stepped forward and was shot in the buttocks for his trouble.  A random event came up, the Rifles had acted last so got a 'shooting random event' and Arthur rolled snakes eyes! 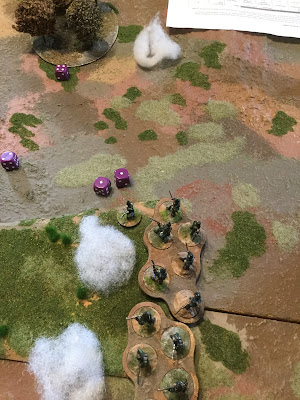 Meanwhile the Borsetshires marched up the flanks and Delaborde's men turned to face them. 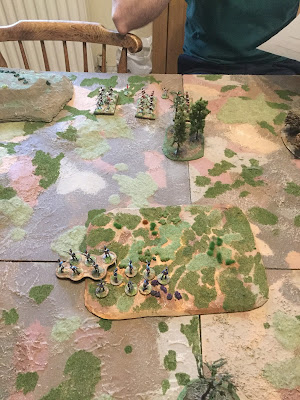 The Borsetshire lads turned to form line, advanced and they sent a punishing volley into Delabord's men. 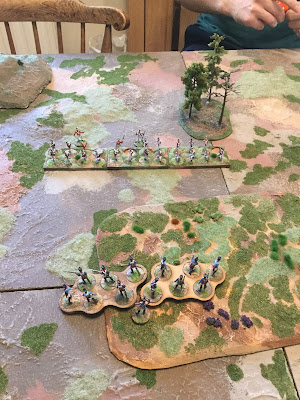 Caught in the crossfire from light bobs and rifles, the French stood no chance an they were soon in headlong retreat.  French force morale was down to two when we called it  day.

So Lt Villiers and Corporal Brown of the Borsetshires survived the Regiment's first action in the Peninsula.  Sir Arthur Wellesley will now march his army to Vimeiro, where the Borsetshires may again see action.

All enjoyed the game and we agreed we should play some more while the rules are fresh in our minds.
Posted by Counterpane at 3:31 PM No comments:

I'm busy painting Republican Romans in 28mm at present and there's not much in the way of completed work to show here.  I'm half way through a box of 60 Victrix legionaries but enthusiasm is waning so productivity has been higher than it is right now.

By way of a change of pace I thought I'd dig out what I have in my Glorantha collection that could work for ancients-period To The Strongest! games.

These Achaemenid Persians were bought for use as Lunar Empire troops in Prax (hence the desert-y basing).  I don't have any other Persian troops of that period to go with them but I wonder if I could stretch a point and use them in a Seleucid force? 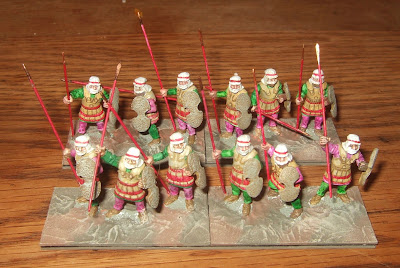 Then we have my Sun Domers. These were mostly made from a pack of Black Tree Designs (I think) Spartans.  There are a few Foundry Greeks in there too.  I can make one nice, deep hoplite unit... 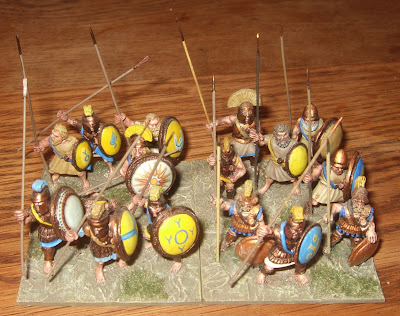 ... and another smaller one with a few singly based Heroes. 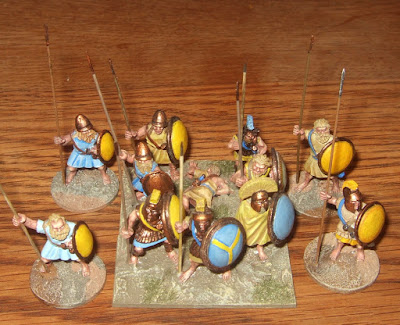 I guess these guys could serve in the army of one of the Hellenistic kingdoms or at a pinch as mercenaries for my Carthaginians?

Finally, there's also a unit of bow-armed light infantry for the same force.

The distinctively Sun Domer blonde hair may be a bit of a problem....

Email ThisBlogThis!Share to TwitterShare to FacebookShare to Pinterest
Labels: 28mm, Ancients, Glorantha, To The Strongest!

Back from the Far North

As the last post suggested, I've been away in the Burghs (Edin- and Bam-) for ten days.  The main purpose of the week was to visit some shows at the Festival Fringe. I strongly recommend Hardeep Singh Kohli, Austentacious, George Egg's DIY cookery show, and local band Flagstaff's Americana Sundays session.

However, as I said in the previous post, our first Saturday in Edinburgh coincided with the Claymore show at Granton.  It was nice to meet up with a couple of mates, Hi Peter and Kenny, but disappointing not to see the Blues Bears present.

A few games caught my eye.  This ACW game made nice use of a Cigar Box battle mat...

This Operation Market Garden - Crossing the Waal game was impressive.... 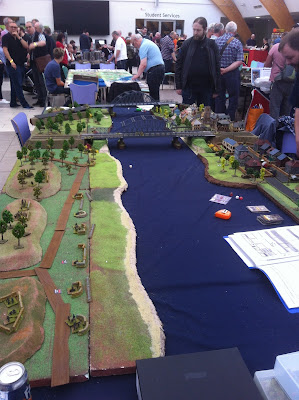 ...and I was quite taken by this large scale 1970s New York gang warfare game. 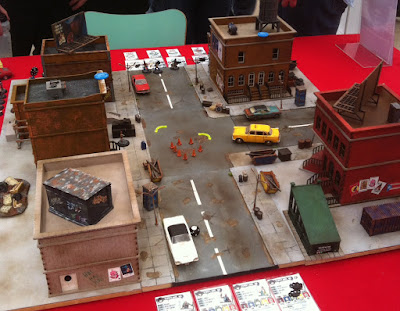 Shopping-wise I was relatively restrained.  Between Claymore and a visit to Wonderland Models on Lothian Road, my trip to Edinburgh netted the following... 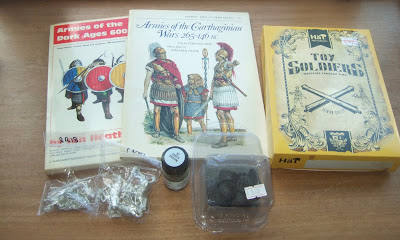 The Ian Heath Armies of the Dark Ages was a bargain at £5 on the Bring and Buy and has already inspired my to consider some Dark Ages battles for To The Strongest in 6m to take advantage of my listing Late Romans and Goths.  Armies of the Carthaginian Wars is showing its age but useful reference material as I continue my dalliance with my 28mm Punic Wars.  The white metal is a pack of four Roman cavalry from Curteys for the same project.  I think they might be a little short of stature compared to my Victrix plastics.

The black items are a pair of resin gargoyles that will end up in the Pavis project... 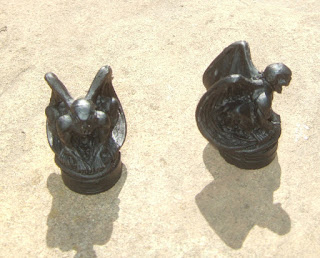 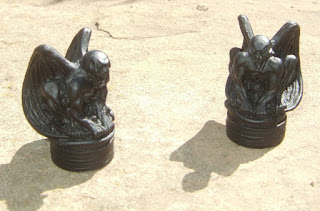 Painted up these guys will give me (with the addition of a couple of officers) a naval landing party for Sharp Practice. In addition, the Royal Marines will do nicely as Government forces for the United Irishmen's Revolt.

Also purchased, but not in the pic above were a ship's wheel and a couple of anchors that will go along way towards turning my Spongebob Squarepants pirate ship into something more historically accurate.
Posted by Counterpane at 9:19 AM No comments:

We're in Edinburgh for a family holiday and ooh look, it just happens to coincide with the Claymore show at Edinburgh College's Granton Campus. Edinburgh's one of my favourite cities and Claymore's a nice show.

There were some nice games and I came away with some ideas it can't post pics here due to the limitations of Blogspot on an iPad.

Purchases-wise I did quite well.  Armies of the Dark Ages and the Osprey book on the Punic Wars for a fiver each on the bring and buy was a nice find.

I also bought four Republican Roman cavalry to complete my To The Strongest legion from Curteys Miniatures, a couple of resin statues that will appear in the Pavis project, and finally some 28mm ship accessories that will help turn my Spongebob pirate ship into a reasonable scale model.
Posted by Counterpane at 1:13 PM No comments: