Rob Connolly and I had another game of 19th Century Principles of War this afternoon. We refought the first of Charles S Grant's Table Top Teasers from Battle for Wargamers magazine in 1979.
The first pic shows the battlefield layout. The two white rectangles show the entry points for the army of the Veereinigte Freie Staedte. The green line shows the limit of deployment of the Lorraine forces. 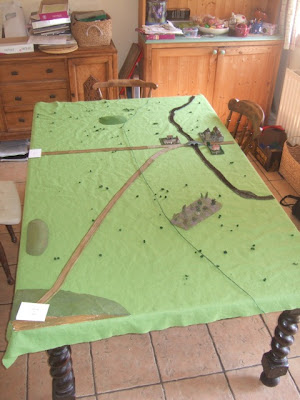 On the northern road (below) the VFS cavalry brigade is first to arrive and finds a brigade of Lorrainer infantry awaiting them. 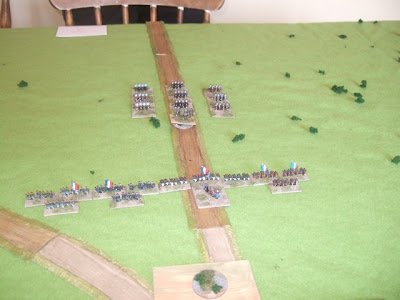 The VFS cavalry arrive in column of march and immediately come under effective fire. The yellow markers show that the Rijkswacht te Paard, the Hohernzollern Kurassier, and the von Ratsmer Uhlans are all shaken. 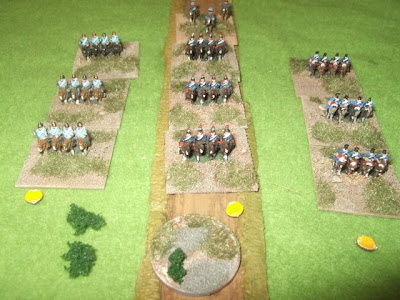 The Royal La Marine (left) and Royal Vaisseaux (astride the road) regiments would stand form throughout the action. 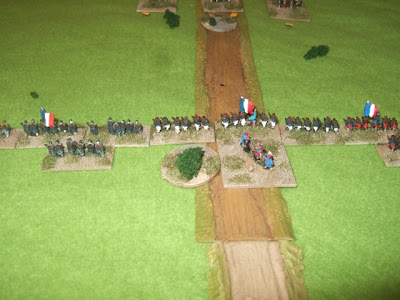 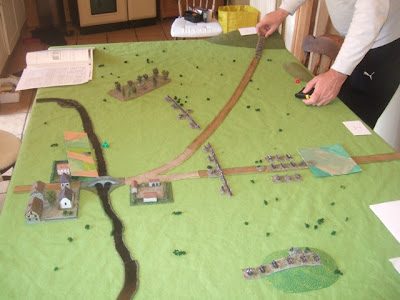 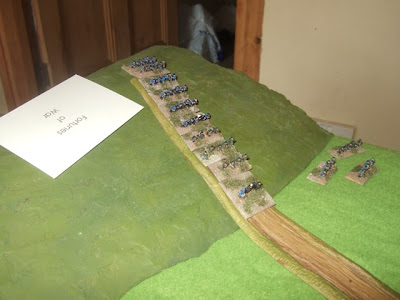 I'm told I have to stop playing T'Pau really loud on the stereo and come to bed now. More of today's battle later.
Posted by Counterpane at 2:48 PM No comments:

The SOTCW game at Gauntlet in 2009 needed an Italian Navy coastal watch station in a house overlooking the sea between Maiori and Vietri. At the time we managed quite happily with a model provided by Will McNally, which was just as well because I've only just finished the model I was meant to provide! 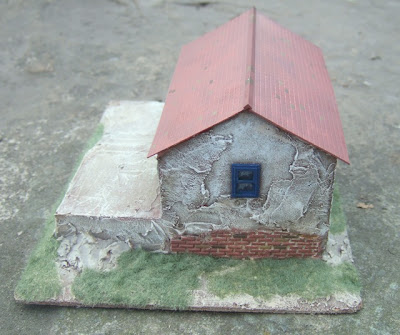 The model is built of foamcore and plastic card on a hardboard base. The brickwork on the end wall above is from one of those bases that come with the old Matchbox (now Revell) tank kits. 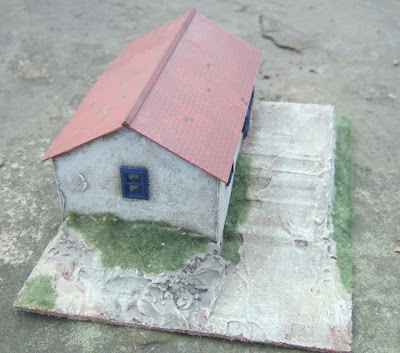 The windows, door etc are from a Wills pack of building accessories - very handy for this kind of job. 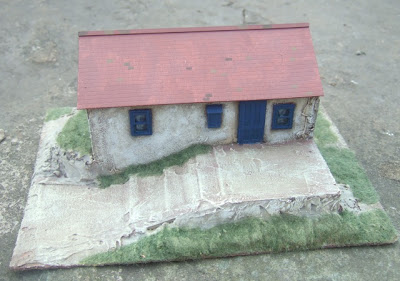 As usual with my buildings the proportions are determined by ensuring that the building fits neatly into a storage box I had available. In this case, a Clarks shoebox (child sized). 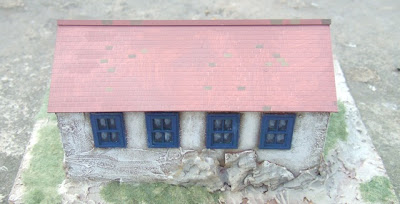 Posted by Counterpane at 7:17 AM 4 comments:

When I was sick and lay abed...

A nasty cold and sinusitis have left me lacking in energy and I've got very little done over the past week or so. Hence the lack of postings here.
I did, however, whilst recuperating, manage to put together a Fujimi SU-85. I've started painting it but it still needs pin-washing and dry brushing. The crew figure is from Blitz - I keep a supply of assorted tank commander figures for any vehicles I fancy building. 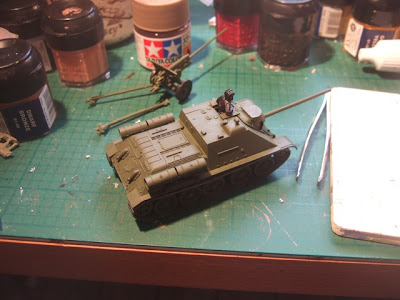 I've also returned to a building a started a few years back. It was meant to be completed for the SOTCW Salerno game at Gauntlet in 2009 but never got there. 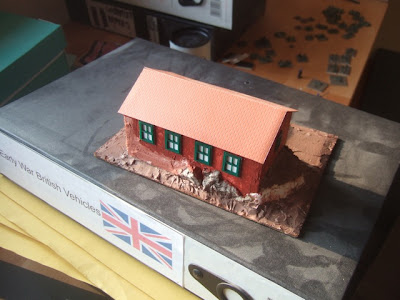 The building was to represent an Italian Naval coastal watch station that stood next to the coast road between Maiori and Vietri. I've gone with the idea of a building perched on a rock outcrop with a ramp up to the door. 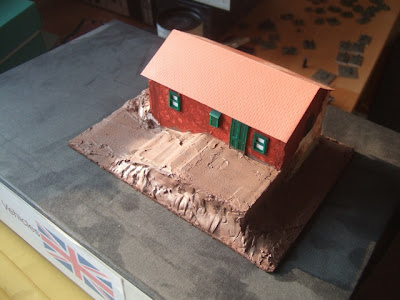 The orange colour is just that of my pot of textured masonry paint; the final building will be rather more tasteful!
Posted by Counterpane at 11:56 PM No comments:

After a slow period I got in a couple of hours’ painting on Saturday and got the first of the recent flea market purchases painted. It’s the Humakti Adventurer from the old Citadel miniatures Runequest Adventurers boxed set.

Before and after pics below: 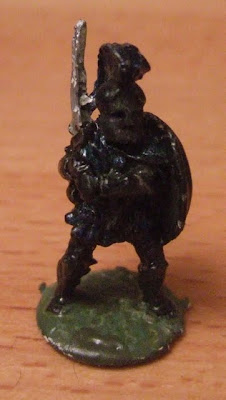 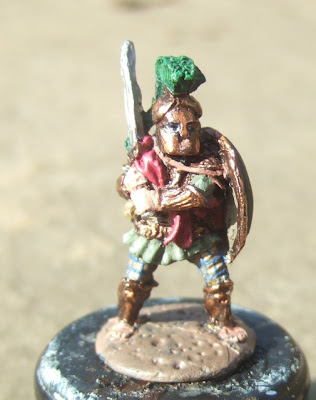 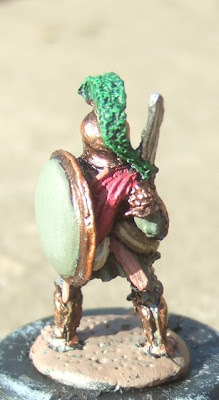 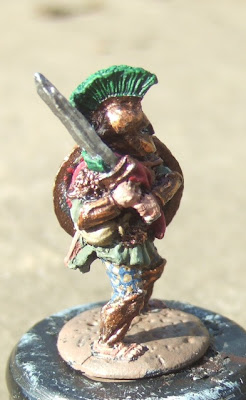 Posted by Counterpane at 1:30 AM No comments: 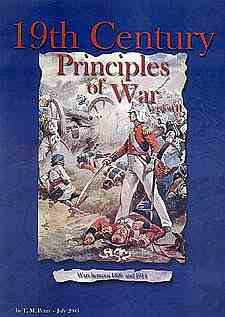 I’ve had some Irregular Miniatures Franco-Prussian War figures for years and have considered a number of options for using them. For a while I was quite keen on developing my own DBA-derived set of rules. I called them “Dans Un Pot De Chambre” after General Ducrot’s comment at finding the army surrounded by the Prussians at Sedan, “Nous sommes dans un pot de chamber et nous y serons emmerdé” (We’re in a chamber pot and we’re going to get shat upon).

The Irregular Miniatures rule-box for the period was toyed with as was an adaptation of Peter Pig’s Square Bashing. Neither really grabbed me.

I then tried Les Gens Braves and They Died For Glory. At the time I wanted one strip of Irregular Miniatures to represent a battalion so I could do the big battles of the war rather than smaller actions. With either of these rules you’d need positively megalomaniacal numbers of figures to do a major action. Is it me or is this typical of American-published rule sets?

I also looked at Volley and Bayonet. Much closer to the right scale – elements are brigades – but I didn’t like to see big, square bases teetering on the edges of hills.

In the end I settled on Principles Of War as a final option. It doesn’t really do the big battle thing but I’d reached the point were I just wanted something that would get me using the figures. If POW didn’t prove to be the rules for me then the figures were going on eBay!

So what’s POW like? Well, at the heart of it is a fairly conventional set of rules. Each battalion-sized unit has a strength (which may be variable or fixed) and loses strength points as it takes casualties. There’s a DBA-like initiative point system for movement within a brigade (extra movement if you’re not close to the enemy) and morale is handled by rolling under current strength on 1d20.

Where the rules do score as innovative is in the command and control system above brigade level. An army might consist of four brigades each of which is represented in the early part of the game by a Movement Base. An army gets one or more extra “dummy” movement bases depending on the overall commander’s quality. This allows the player to disguise the main focus of his attack.

Movement Bases (and subsequently deployed brigades once the base has been “spotted” by the enemy) follow an arrow that the player has drawn on his map of the battlefield. A command marker advances along the line of this arrow and the elements of the Brigade are penalised if they don’t stay within a fixed radius of this marker. Strangely this marker isn’t the General’s own element – the general flits around rallying pinned units and saying “follow me lads”.

In general I’m happy with POW so far. If I have a problem at all it’s the familiar one that many rules writers struggle to communicate their ideas to a player attempting to pick up the rules by reading them rather than being guided by an experienced player.

It takes long enough to learn a new set of rules. If you aren’t being taught them by someone who already knows them, then you should at least be spared the trouble of trying to puzzle out unnecessarily ambiguous wording. One of the sections of POW says something like “A unit may make only one move and/or formation change per turn”. That careless “and/or” renders the intent of the sentence utterly opaque. Is a change of formation a type of move? It could mean “one move or change of formation” or perhaps “one move and one change of formation”.

I asked on the POW mailing list and was assured that the latter is the case. A dragoon regiment, in our case was faced by enemy infantry it was unable to engage because they were in terrain impassable to cavalry. It may, it seems, given the initiative points and suitable flexibility in its orders, make a about-face (a formation change) and withdraw (a move) within a single game turn.

Posted by Counterpane at 1:39 PM No comments:

On The Workbench This Month

End of this month I need to show some progress in my Guild Team Build entry - The Wolf Pirates. I have started on the two Vormaini (Samurai to the non-Gloranthan among you) and a Humakti I picked up at the market in Sheffield. There's also a Tiger Son - a kind of were-tiger. I've had the latter figure for years without painting it but one of them appears in a picture of the Wolf Pirates in one of the Runequest books and I think it's the figure that tempted me to try Wolf Pirates in the first place.
Unfortunately I'm also getting side tracked by other projects and spent an hour or so this evening doing minor surgery on some Achaemenid Persians who are gradually taking on the role of Lunar infantry. Then I found a spare wire spear and one of the Spartans I use for Sun Dome Templars so he got glued up and stuck to a bottle cap for painting too.
After that I should get back to the Border Reivers but they still aren't capturing my enthusiasm.
Posted by Counterpane at 1:56 PM No comments:

The Grant Order of Battle 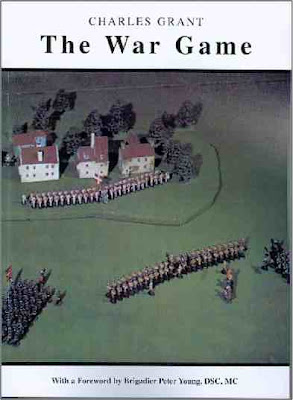 Will McNally has very kindly sent me a list of the units mentioned in Charles Grant’s The War Game. It’s the finest, artisan-made nostalgia and it's reproduced here for your enjoyment:

Posted by Counterpane at 1:56 AM No comments: