Christmas Gaming - (Not) The Death of Gustavus Adolphus

Andy and Ron came over yesterday and we played The Pikeman's Lament with my recently completed Thirty Years War collection.

The battlefield was the extended version of the Lützen battlefield seen here previously.  The Swedes will enter from the right and the Catholic League troops from the left. You can see that there are wisps of smoke and fog drifting across the field.  These served only to block line of sight. 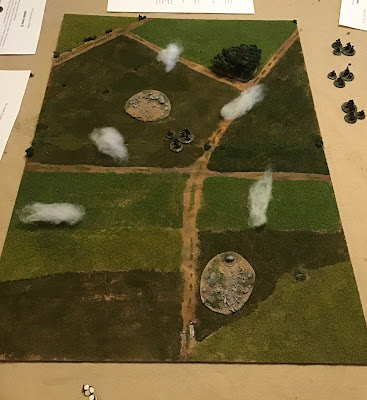 The unit in the centre of the board is Gustav Adolf, the King of Sweden, with his Life Drabants.  That's Gustav, top left, in the picture below... 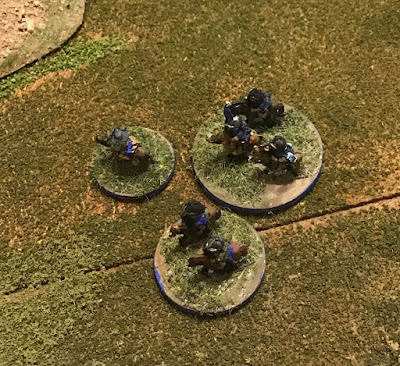 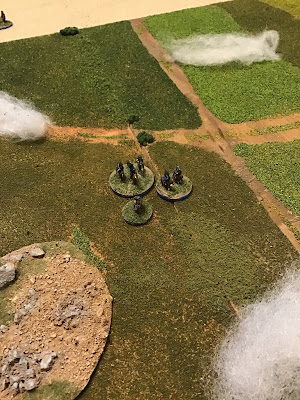 Ron was His Majesty for the day and also took on the role of Ensign Niels Broden of the Smålands Ryttare.  Thus Ron had a one-unit company of Life Drabants, with the King rated as a "Lion of the North" and an "Inspirational Leader" and a five-unit company of Swedish horse (aggressive gallopers in the rules).

Jamie (as Ensign Per Lungmark) had the other Swedish company - six units of Östgöta Ryttare, also aggressive gallopers.  This meant that all of the Swedish units had the 'Wild Charge' rule!

Andy, on the Catholic left, played Ensign Salvatore Avallone, hot-headed commander of a company of Piccolomini's Harkebusiers (two units of trotters and three of dragoons).

Finally, I took on the role of Ensign Johannes von Altburg commanding a company of Götzen's Cuirassiers (five units of elite trotters).

The picture below gives an idea of the size of the battlefield.  We didn't need the extra leaf in the kitchen table this year! 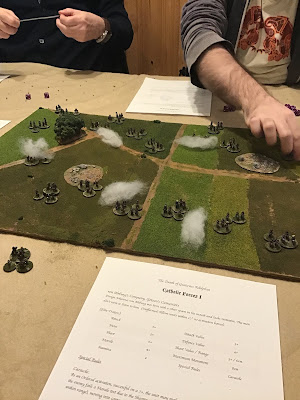 The game began with the Catholics making no significant progress.  As a result the King was able to make an ordered activation and move away from the enemy (I'd rather hoped he'd be sucked into the action from the start but no-one got close enough to activate his Wild Charge rule).

On the Catholic left, Avallone's dragoons advanced towards the rough ground... 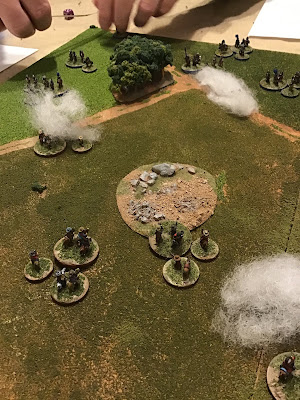 ...whilst von Altberg's cuirassiers advanced on a broad front to their right. 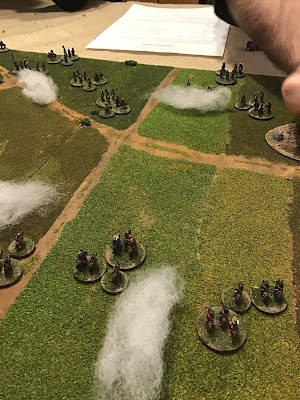 Thereafter, I think the phrase "confused cavalry melee" is an awfully apposite one.  The Swedes, as is their won't, repeatedly threw themselves into headlong charges whilst the Catholics stood off and shot.  In the picture below, the a three-man Swedish unit has just charged into the left-flank troop of my cuirassiers emerging from a fog-bank. 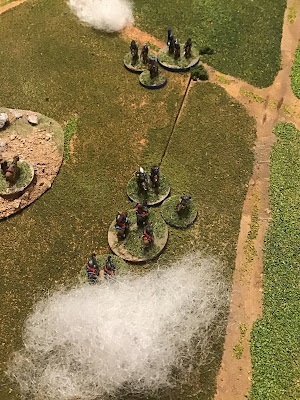 Thanks to their heavy armour (Stamina 4 in rules terms) the cuirassiers were remarkable solid performers. 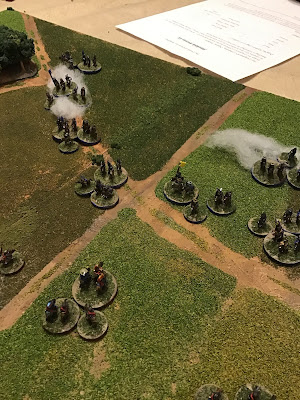 Gustav fought bravely.  An early personal challenge had seen him strike down Ensign Avellone and now he fought in melee against von Altberg's own troop.  The latter's gold-plated steel armour didn't protect him from an unlucky blow (yes, I rolled snake eyes) and down he went. 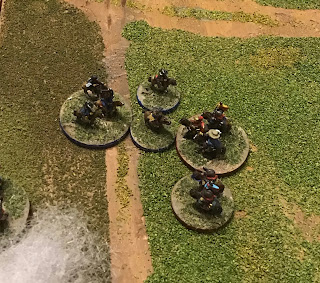 By the end of the game, I think we had lost three of the five company commanders involved (Andy's, mine and Ron's).  The dead outnumbered the living on this part of the Lützen battlefield. 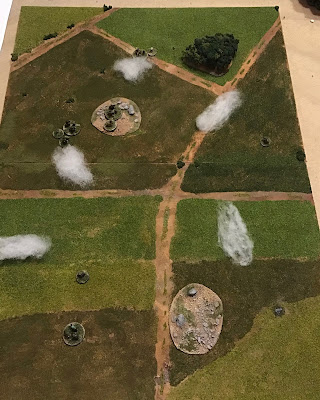 In the end the victors were the dragoon elements of Piccolomini's Harkebusiers with all three units surviving if not intact then at least able to march off in formation.

Gustav Adolf survived as the last remaining figure of his unit as did Jamie's Per Lungmark.

The Pikeman's Lament includes a table to determine what happens to officers who fall as casualties during the game and I thought it might be interesting to find out.

Ensign Salvatore Avallone of the Catholic harkebusiers died a hero's death in single combat with the Swedish king.  He was promoted posthumously to colonel before being buried with honours on the battlefield.

Ensign Niels Broden of the Smålands Ryttare, unhorsed in the fighting on the Swedish right, turned out to be only lightly wounded.  He returned to the camp with an impressive scar and a good story to tell.

Johannes von Altburg's personal wealth perhaps played some part in his escape from the field.  Although his cuirassiers have previously shown little regard for him, they did on this occasion drag his wounded body from the field and he lives to fight again.

Happy Christmas everyone!  What did you get in the way of pressies?

Just a couple of gaming related acquisitions for me this year.

Somewhat out of my ordinary is this... 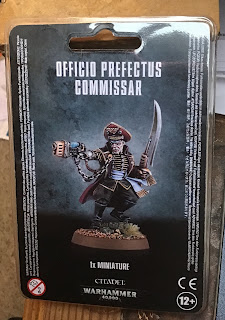 My Mum, bless her, doesn't really have a clue what kind of wargaming I do but she did pop into the local branch of GW and pick up the above figure.  She kept the receipt so I can swap it for something else.  I may see what I can trade it in for in the way of paint.

More my cup of mead is this gift from Jamie... 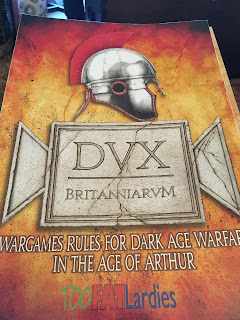 I've been considering Dux Britanniarum for some time as a way of using my Late Roman / Bacaudae figures.  A bit of rules reading is called for, possibly followed by some rebasing!

Posted by Counterpane at 3:02 AM 2 comments:

Email ThisBlogThis!Share to TwitterShare to FacebookShare to Pinterest
Labels: Bacaudae

As usual I've got a couple of games planned for the Christmas period.

First up is a first run-out for my 6mm Death of Gustavus Adolphus game. 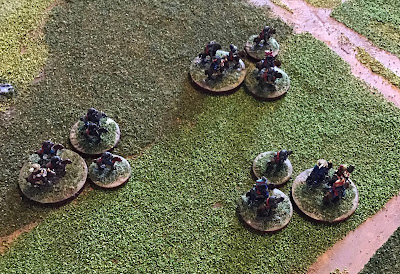 This is to be run using The Pikeman's Lament by Dan Mersey and Michael Leck. 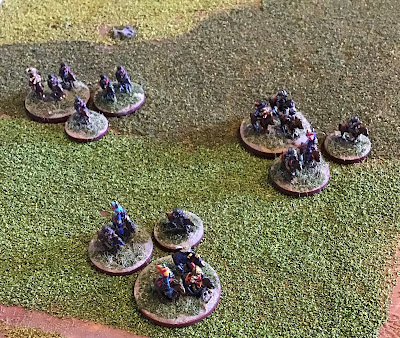 If we get too many players for the Gustavus Adolphus game (always tough to judge as people tend to sign up or drop out at the last minute) I'll run a parallel game of The Pikeman's Lament using by recently rebased (and still to be flocked) 15mm Samurai... 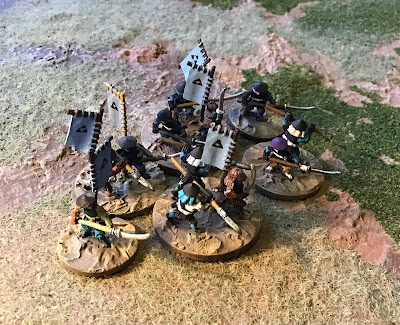 And finally, I intend to run a scenario called Incident at Fearnley Whittingstall, a Second World War skirmish using the Arc of Fire rules and set in the small Dorset village of that name.  No more details at present to avoid spoiling any surprise but here's one of the village buildings that's currently on the workbench. 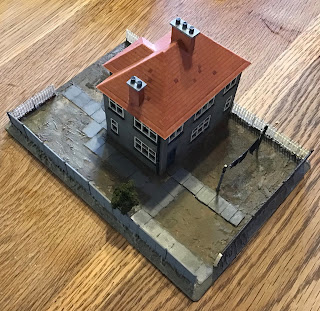 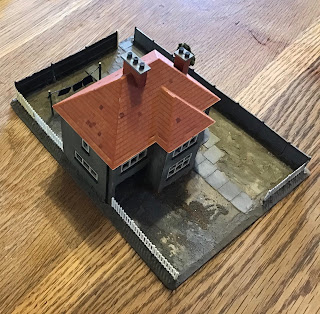