I've mentioned my projects for this year so I suppose I'd better set them down so I can be held to them.
The earliest deadline of all is for Gauntlet in July. I said I'd build some terrain (20mm Peking, 1900). Maybe the Mongol Market?
In August a group of us are off to Melrose in the Scottish Borders. This gives me the ideal motivation to complete my Border Reivers armies for HOTT. These, a force of reiviers and the Wardens men in hot trod, are 15mm from East Riding Miniatures. I've had them for years and, to be honest, I don't like them. They're poorly sculpted figures and they aren't encouraging me to get them done.
The Wolf Pirates need finishing by November if they are to be entered in the Guild's Group Build competition. however, I intend to take them to Berkeley in the first weekend of September so an even earlier deadline applies.
Finally there are a couple of projects that have no particular deadline associated with them. I want to learn 19th Century Principles of War as I think it might be the set for me when it comes to using my 6mm Franco-Prussian War figures. They're pretty much all done (a few General elements need finishing) so I just need to learn the rules and set a date.
Then there's Polemos GNW. I plan to run a fictional early 18th century Russo-Turkish campaign but again I need to learn the rules first. there are also a few figures left to paint. I think I'll set up a game with what's done now, though, and finish the rest later.
Posted by Counterpane at 2:36 PM No comments:

One of my projects for this year is to get a Wolf Pirate army completed in time for Berkeley in September. It's also my project for the Guild Group Build.
Leader of the Wolf Pirates was the notorious Harrek the Berserk. He slew the Rathori polar bear god and wore its pelt as a cloak. Here he strides the ruins of the City of Wonders. 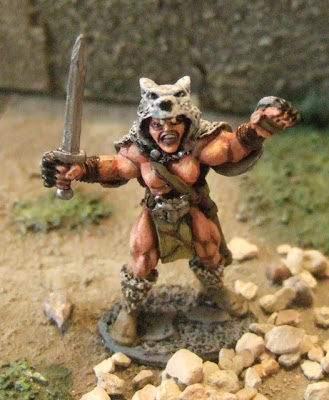 Harrek's closest companion is Gunda the Guilty. She'll be rated as a Paladin in my HOTT army. 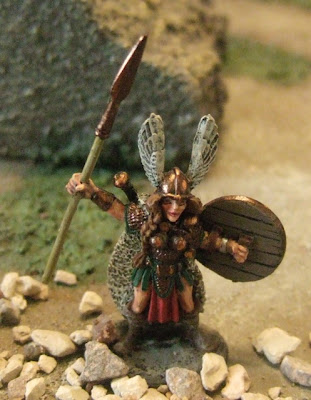 Harrek's other companion is Argrath. The future Prince of Sartar sailed a giant cradle through the underworld before joining the Wolf Pirates. 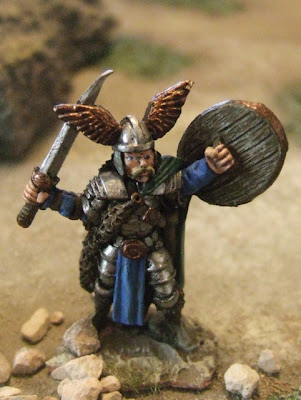 All of these figures are from Lance and Laser. They'll be based for HOTT later.
Posted by Counterpane at 4:55 AM 1 comment:

Redevelopment - The "After" Shots

As I've mentioned before, my games room has recently had a make-over. Now at last it's tidy enough to justify some photos of the finished space. 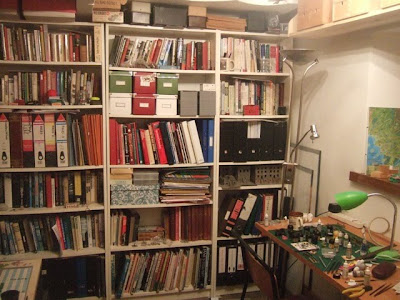 These shelves are for terrain and other stuff that needs big boxes. Eventually I hope to get the boxes looking a bit tidier. 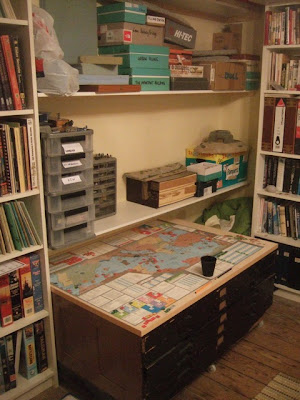 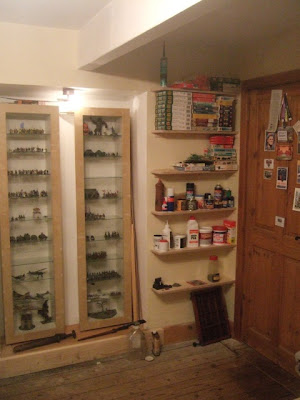 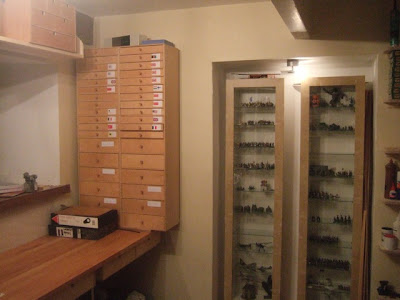 The long workbench gives me plenty of space for current projects and to have reference material close to hand. 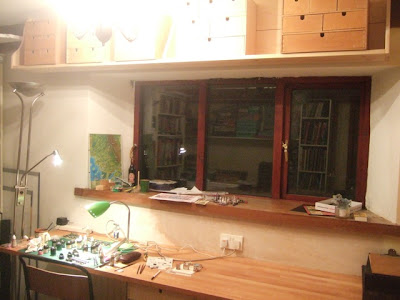 Posted by Counterpane at 2:13 PM 4 comments:

On the Workbench - February

Having got the Hammerhead game out of the way I'm now back to the Great Northern War in 6mm.
I spent my Christmas money on some Irregular Miniatures Ottoman Turks and they are coming along. A couple of bases worth of Sipahis are painted and one of them is part-way through basing. 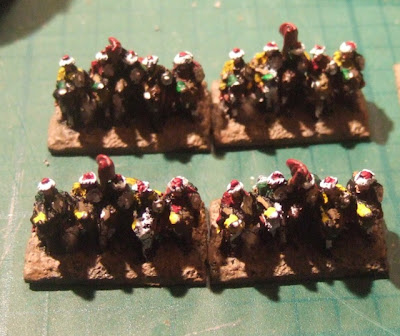 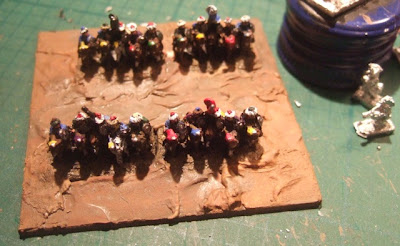 Also halfway through the basing process is a unit of Janissaries.

At Hammerhead I blew another chunk of money I'd got for my birthday on some more Russians from Baccus. I'm planning a small campaign set in 18th century Andreivia and felt I needed some more Cossacks, some dismounted dragoons and some Streltsi* musketeers.
Here are some of the toys awaiting their turn under the paint brush. In the foreground you can see some Sipahi elements glued to wine bottle caps for ease of painting. The amount of Shiraz I've consumed just to get some suitable bottle caps! Life is so hard! 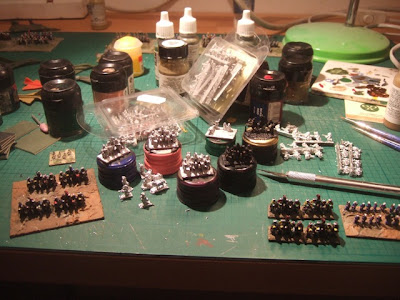 *Fortunately I have a Russian colleague at work so I now know to pronounce it strelj'TSEE.
Posted by Counterpane at 1:23 PM No comments:

The line-up for Cornbury Festival was announced today. Although I'd happily see Bellowhead any day, Imelda May's always worth seeing, and I'd go and see Cyndi Lauper, none of the headliners (James Blunt, The Faces, Status Quo) excite me. The result is that Stella and I will be giving Cornbury a miss this year.
What this means is that I can go to Gauntlet 2011! Yay!
I know the SOTCW guys are putting on a Boxer Rebellion game. I'll have to find out what they still need in the way of terrain or figures.
Posted by Counterpane at 2:33 PM 1 comment:

We, the group that seems to have become an unofficial SOTCW display game team, played a fun game of Cold War Commander at the Hammerhead show today.
Pics of the game can be seen at the SOTCW blog here:
http://sotcw.blogspot.com/2011/02/crossing-lippe-august-1985.html
However, the game also gave my new German petrol station a first chance to grace a battlefield.

The model is made from a laser-cut kit by Najewitz Modellbau from Germany. It and the electricity pylons from the same source easily attracted most of the "where do you get the... questions". 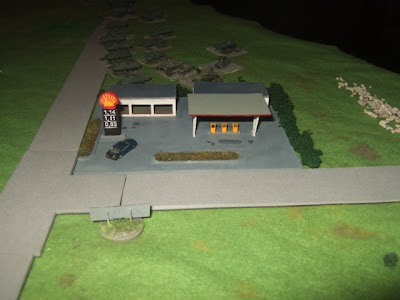 Posted by Counterpane at 2:06 PM No comments:

Among the pile of 1/300th scale models I bought on eBay towards the end of last year were four large, Soviet-looking, delta-winged aircraft. A bit of research revealed that they were Sukhoi 15 interceptors. 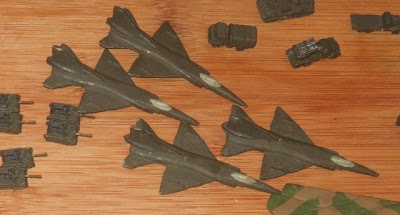 Not the most useful aircraft for a wargamer who mainly uses aircraft to support ground operations. It turns out that the SU15 Flagon was only ever used by the Soviet Air Force (it was never exported) and it was only ever used as an interceptor (no ground attack version). The Flagon's main claim to fame is in shooting down Korean Airlines KAL-007.
A quick repaint has at least got them looking pretty. I think I may be able to use them as markers to show who has air superiority. 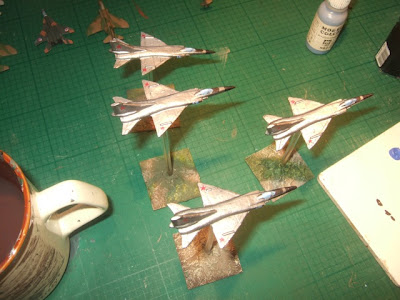 Posted by Counterpane at 3:28 AM No comments: