My painting mojo's been a bit absent over the last few weeks. In an effort to reboot my enthusiasm I decided to clear out some of the junk in the games room.

I started by going through the remains of several boxes of 28mm plastics. The sprues went into the plastic recycling, the boxes to cardboard recycling, and the remaining parts into little ziplock bags; much more practical from a storage point of view.

Looking at the bags, I was inspired to see if I could produce useful figures from the left-over bits.

The only legs I had were the unused spares from the Perry French Hussars. 40 years ago I managed to do a halfway decent job of covering an Airfix 54mm Polish Lancer to stand upright by means of some fairly drastic plastic surgery. Could I do so in 28mm? 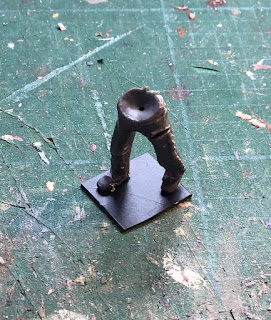 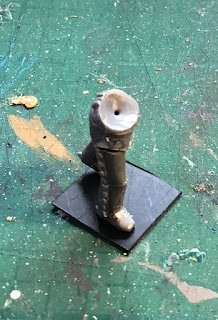 The only available torsos were some leftover from the Wargames Foundry WSS cavalry. I chose the plainest ones without neck cloths.  I also added the one remaining Perry sabretache and scabbard. 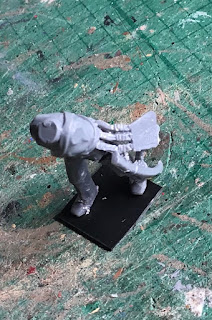 By this stage, a concept had emerged. A dismounted Hussar officer who has been serving as ADC to a General officer has been wounded whilst carrying an important dispatch. After a time hiding in a barn, he's now trying to make his way back to safety. He has discarded his dolman and pelisse and wears just his blood-soaked shirt.
For arms I chose plain ones from a Warlord American Civil War infantry set. The right arm got a hand holding a pistol from the WSS cavalry set.
Finally I added a be-busbied head from the French hussar set. 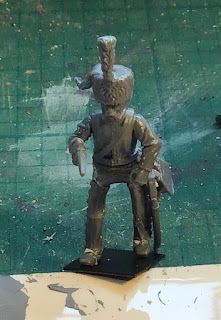 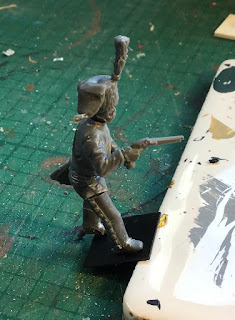 The next stage was to fill the various holes, undercoat, and paint.
I decided to paint him an an officer of the 3rd Hussars. 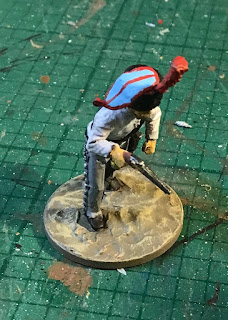 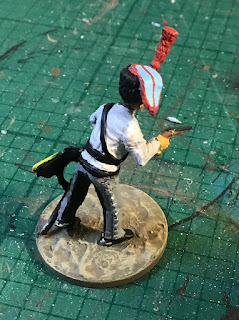 It's not clear in these photographs but there's a fairly nasty-looking bloodstain on the front of his shirt. 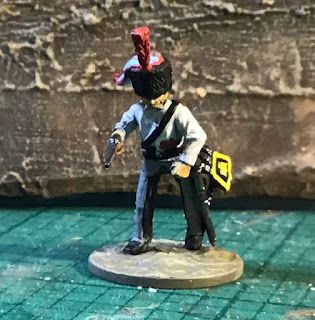 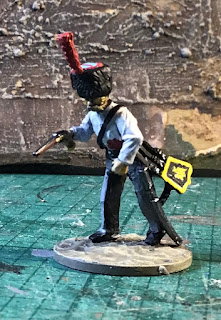 By the way, why is this my first 28mm Napoleonic figure if I had a box of Perry Hussars?  Because I'd converted the hussars into Maximilian Adventure contre-guerilla cavalry, that's why.

Posted by Counterpane at 3:30 PM