I'm thinking of running a Glorantha Song of Blades and Heroes game at Christmas. In considering which forces I might field I came across a unit of Praxian Ostrich Riders I'd made for Hordes of the Things. I thought I'd rebase them and maybe add a few more models to make a little SOBH warband.

The Ostrich Riders are pygmies and I'd made the original models by mounting HaT 20mm plastic Numidians onto 28mm white metal Ostriches (don't recall which manufacturer).

Looking at them anew I decided they didn't look right. They looked like smaller scale models; not like shorter people of the same scale as my other 28mm guys.

I poked through the spares box and decided that 28mm heads transplanted onto the 20mm bodies might work. And I even had 28mm scale Numidian heads left over from building my Punic War forces! 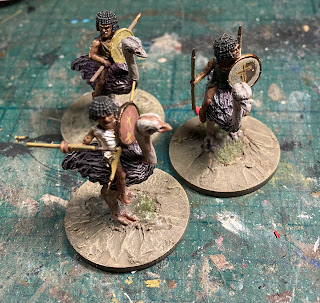 I have a couple of other models on the workbench, one of whom will be a leader with a longer spear and a bronze helmet presumably traded for at one of the oases of inner Prax.

The Ostrich Riders prefer to fight by skirmishing with their javelins rather than by engaging in close combat. I'm thinking of rating the ordinary tribesmen as Quality 4+, Combat 2, Free Disengage, Long Move, Shoot (short range).

One might ask why I haven't rated them as Mounted. This is because Mounted gives a +1 in close combat to normal-sized, non-mounted figures. Because these guys don't end up any taller than a normal-sized human, I didn't think this appropriate.

Posted by Counterpane at 2:13 PM

I think they have come out just fine. The 28mm heads have worked a treat.
A Glorantha game/ campaign sounds great . I really look forward to reading more.
Somewhere in the lead mountain are quite a few beastmen I bought a few years ago. I have a one page set of rules. You have reminded me to try and find them …

I'm thinking of offering two or three linked, simultaneous games. The story is developing in my mind based on the previous SOBH games I've detailed here on the blog. They are all tagged "Pavis".