Richard Helliwell of Infinity-Engine very kindly sent me a prototype version of his 28mm MDF houses for Pavis.  He' seen the houses I'd built so far and wanted to know what I'd make of the model.

The pack Richard sent would allow me to build two single storey house or one two-storey.  I decided to go with the latter. I originally intended to blog through the process of building the model but it soon became apparent that this was an early prototype with a few fixes needed.  It wouldn't be fair, I decided, to vent my frustrations in public when what I ought to do was to provide honest feedback direct to Richard.

So let's have a look at where we ended up.  First of all, I should point out that I've added the Tetrion plaster coating to the walls.  In addition, the wooden shutters are an addition of my own. 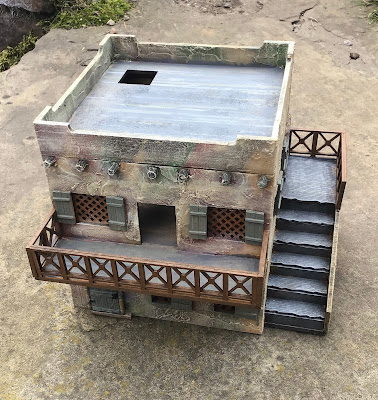 As you can see, the model has a rather nice external staircase and a balcony, both additions that didn't previously figure among my Pavis buildings. 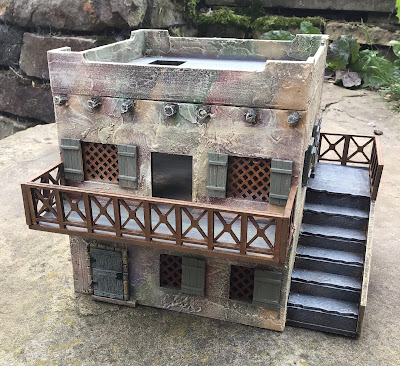 In the shot above you can see a change I've made to the basic building.  The original ground-floor front window was a single large aperture, about three times as wide as it was high.  To me this looked too twentieth-century Earth.  I couldn't see it working without a steel RSJ.  As a fix, I blocked off the centre section with some spare MDF to make the wide window into two smaller ones. 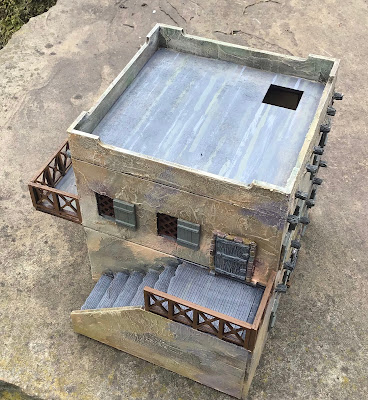 If I had the time again I'd consider scoring planking on the roof but I was anxious to get going with the build so I've ended up using a paint effect to simulate the look of planks. 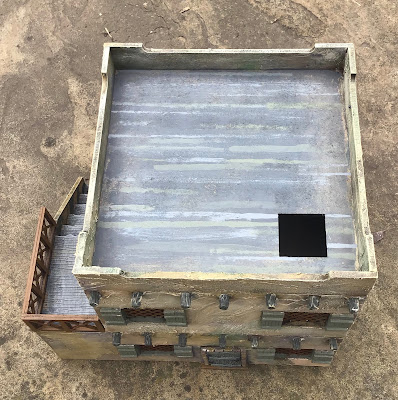 Some resin is used in the model.  The exposed ends of the roof beams are resin pieces inserted into pre-cut holes in the tops of the walls.  The doors are nice, double-sided resin pieces that slide into slots in the wall pieces. 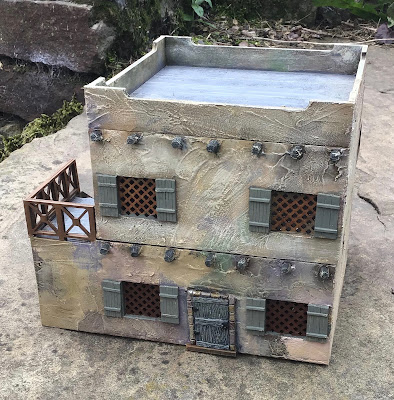 I've left the roof and the floors removable.  The lines where they separate are a bit obvious but there's some nice internal detailing in the model that I wanted to take advantage of.  I haven't yet completed this so that can wait for a future blog post. 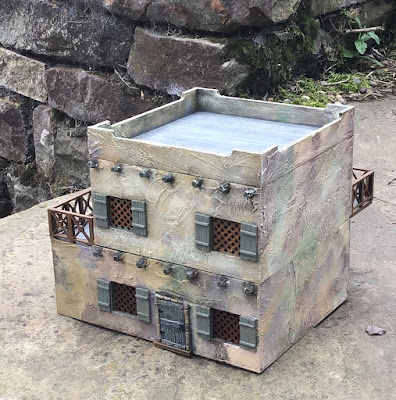 I'm pretty pleased with how the model came out.  I've suggested some changes to Richard but we'll have to see what he takes on board.

In part two I'll show you the interior and what I've done with some accessories that Richard included with the model.

All that remains for now is to thank Richard profusely and to to advise you all to visit the Infinity-Engine site and look out for the production version of the Pavis houses when they come along.

Posted by Counterpane at 2:38 PM