One of the aspects of the Sharp Practice rules that seems to cause the most confusion of new players is the terminology around light troops.

This is caused partly by some questionable decisions by the designers in choosing terminology and partly by the fact that contemporary military terminology was far from consistent with the needs of wargamers.

Which troops are light infantry?  Well the 1er Regiment d'Infanterie Legere are clearly light infantry in some sense (leger or legere being French for "light") and they'll have worn blue light-infantry breeches during the Napoleonic Wars but were they light infantry in Sharp Practice terms?  Probably not.  French "light" battalions, although in theory trained to operate as skirmishers, would usually find themselves fighting like any line battalion.

I think a Venn diagram is called for: 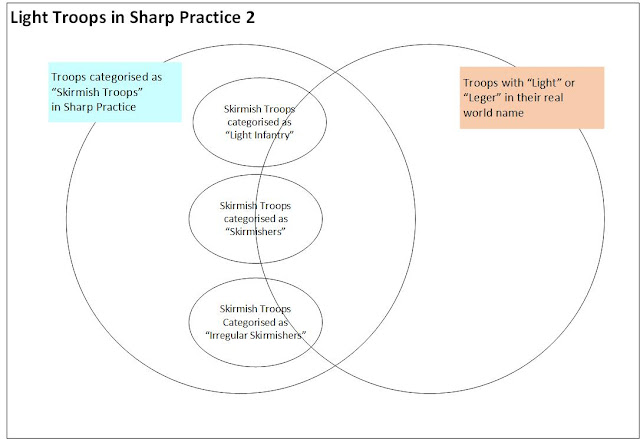 So some of the time, elements of the 1er Leger will be forming part of a skirmish line or running around in the hills in a loose swarm, making best use the available terrain and using aimed musket fire to dominate the enemy.  In this case they'll be treated as Skirmish Troops if we're playing a game of Sharp Practice.

Most of the time, though, the guys of the 1er Leger are fighting in line.  They are standing shoulder-to-shoulder with their comrades and if they fire, they do so without aiming, just pointing their muskets in the general direction of the enemy and firing to order.  In these circumstances they are treated as line troops and deploy in Groups of eight figures.

Skirmish Troops get to take a third action when activated (as long as that action is a move action).  This will apply to our 1er Leger men when they are fighting as Skirmishers (i.e. the second class of Skirmish Troops) in Groups of six figures.  It will not apply to Groups of eight Legers fighting in line.

Hopefully this post will be useful in future when this issue comes up again on the TFL Forum or the Facebook group.