With my new gaming table available I've spent the last couple of evenings playing with my 1/300th scale World War 2 toys for the first time in ages.  I've also dusted off my copy of TacWW2 for the first time since, I think, 2009!

On Monday evening I set up two identical small battlefields and played through the same small action turn-by-turn using Blitzkrieg Commander (2nd edition) on one table and TacWW2 on the other. 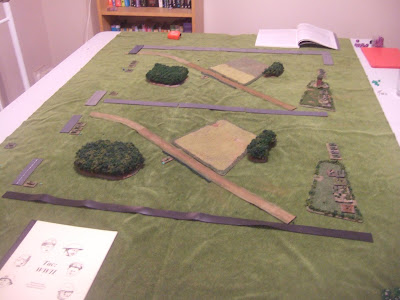 The two games played very differently and gave opposite results, though this is perhaps not surprising given the relatively small forces involved. There was a lot of scope for an extreme die roll swinging the result.

The game involved a company of T-34/85s supported by a reduced-strength battalion of Soviet infantry trying to get one platoon off the far end of the table. A company of Panzer IV Ausf J and a couple of German recce platoons opposed them.

Initially the BKC Soviets raced ahead, far out-pacing their TacWW2 equivalents. However, this just got them into trouble and they were gradually picked off by the German tanks, which had taken up positions in the large woods.

The TacWW2 German tankers were less fortunate. An exchange of long-range shots with the T34s saw one Panzer platoon neutralised and the entire company retiring off the board with a morale failure. In a demonstration that TacWW2 units are not as slow-moving as first seemed the case, the T-34s then snapped into March mode and were off the table before the German armoured cars could redeploy to catch them in the flank.

Having enjoyed trying TacWW2 again, I decided to have another go this evening.

I picked Counterattack at Belino by Bob Mackenzie. This is a tiny scenario; in TacWW2 the battlefield is 75x37.5cm. I really didn't need the new tables for this one! 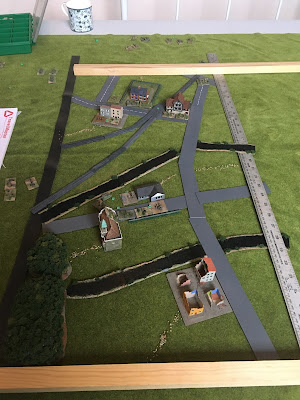 The action takes place in the early hours of 3rd February 1945. A motley collection of German forces (includingLuftwaffe FlaK troops fighting as infantry) were tasked with pushing Soviet infantry out of the villages of Belino (middle of the board) and Katsau (far end).

The darkness meant that when units did encounter each other it was at close range and combat quickly became lethal. The German II Abt 448 Grenadier Regt was pretty much wiped out before any other German units could move up to support it having been caught in a pincer between the Soviet troops holding Belino and those from Katsau, who had decided attack was the best form of defence. 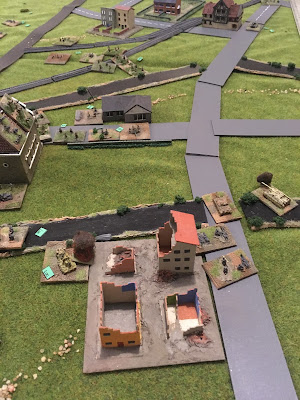 A gunnery duel between the StuG III and Jagdpanzer IV platoons of 2. Batterie 276 StuG Abt and a Soviet 47mm anti-tank gun platoon in Belino was initially inconclusive.

Subsequently, though, a platoon of T34/85s arrived down the road from Sauermuhl. Although the T34s were later driven off by the StuGs, this was not before the Jagdpanzer IV platoon had been knocked out.

A battery of 88s firing as artillery in support of the Germans added lack of accuracy to tardiness and failed to influence the action - they only just missed hitting their own StuGs! 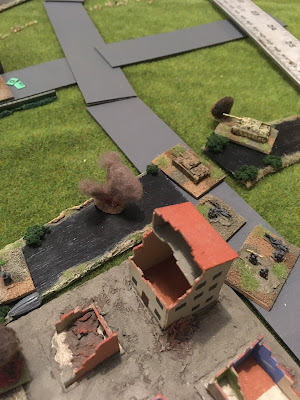 In the end the Germans morale failed and by the end of turn 6 (0400 in game time) their attack had stalled completely. In rules terms a result of "Halt" on the battalion morale test meaning that new orders would have to be sent down from regimental HQ to get the attack moving again.

I enjoyed giving these rules another outing. I'd forgotten a fair amount but picked it up pretty quickly. I'll try to not leave it another eleven years before I play TacWW2 again.

Posted by Counterpane at 2:36 PM

Nice stuff! I've got a small 6mm ww2 collection that still haven't seen a game table. One of these days...

Thanks Ski! I can certainly recommend Bob's site as a source of scenarios if you're paying at the one-model-is-a-platoon level.

Perhaps someone will be inspired to get Tac back into print so I can buy a copy. :(

Still some copies appearing every now and then on ebay. Just picked up a copy. Great little table Mr C ideal for a solo game.

Might be worth trying Irregular Miniatures. I think they used to retail TacWW2.