On the workbench - I'm not sure what?

I had a sudden urge to paint something totally pointless; something that wasn't needed for any on-going project. Rooting through the leadpile I found a partly painted horse and rider. It's one of a number of figures I wouldn't have bought myself but that I acquired from a friend who no longer wanted them.

After a couple of painting sessions I'm calling it done. 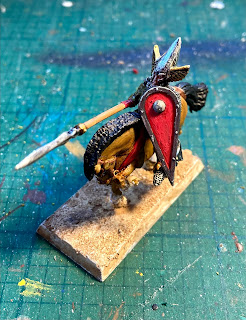 It's clearly an old Citadel miniature but it was firmly attached to its slotta-base with some kind of rock-hard filler so I can't tell if the casting bore any kind of label. 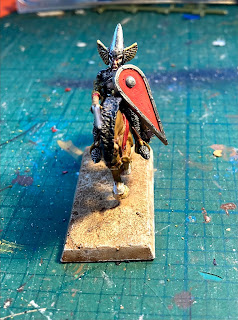 Jamie immediately identified it as a High Elf but I wondered if it was perhaps a Melnibonean? 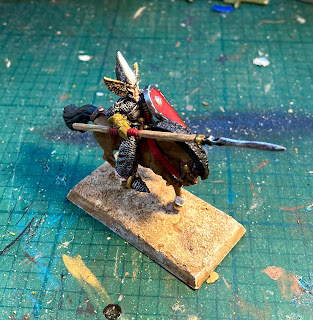 I've no particular plan for using him but I thought I'd work out Song of Blades and Heroes stats for him anyway. Using an online Warband Builder I came up with this:

Posted by Counterpane at 6:30 AM

It's an old GW High Elf Silver Helm... Their second-tier cavalry. Had a bunch back in the late 1990s. Looks good!

Thanks Ski - always interesting to learn what an old figure is meant to be.