On Sunday I had another, somewhat larger-scale, go at A Fistful of TOWs 2000. As with the previous game, this was a solo attempt at refreshing my memory of the rules and trying to decide if they represent a useful addition to my rules toolkit.

Using terrain based on the fictional West German location defended by the Canadians in Kenneth Macksey's book First Clash, I pitched a Soviet tank regiment against a US Ranger battalion.

The Soviets had three battalions of T-64A supported by a motor rifle company in BMP-1. The could expect a motor rifle battalion in BTR-70 to arrive in support some time between game turns two and six. They were ordered to occupy with infantry the villages of Kuppenheim and Blickheim and to get tanks onto the Blickheim ridge.

The NATO force consisted of a US Ranger battalion - three companies of infantry supported by six Dragon ATGW teams. The expected a battalion of West German tanks (reservists in M48A2G2s) and a company of Jagdpanzer Kannone. As with the Soviet reinforcements, these would enter sometime between turns two and six. 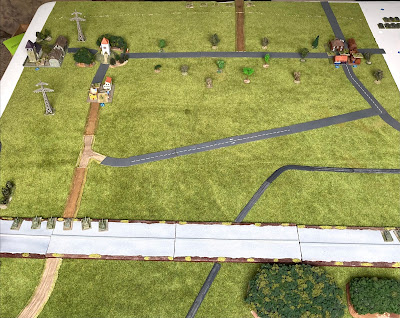 The field of battle seen from the Russian entry zone.
Kuppenheim on the left edge between the pylons, Blickheim
on the right at the crossroads.
The Soviet tanks advanced with two battalions towards Blickheim (followed by the BMP company) and one battalion towards Kuppenheim.
It quickly became apparent that the M47 Dragon was not going to dominate the battlefield. One Dragon fired from the front edge of Kuppenheim but missed. The return fire of an entire battalion of T-64s immediately wiped out the launcher team.
An overwhelming impression I'm left with is that in FFT a stabilised main gun is a huge advantage to an MBT. There seems to be no penalty to firing on the move. If you move an unstabilised vehicle (like the Jagdpanzer Kannone), you will be shot at by moving enemy tanks and probably destroyed before you get a shot of if the enemy tanks have even the poorest stabilisation.

I did quite like the spotting rules in FFT. I think they could probably be ported to CWC. Recon units don't have the benefits that they have in CWC but there is a use for them in drawing fire and/or spotting units ahead of the main force. Units spotted by any friendly force are spotted by all of them.


The game ended in a marginal Soviet victory. The captured one of the villages and moved tanks onto the ridge, driving of the WestGerman armour.

Overall I found FFT OK. I think it's worth having it in the toolbox as a system to use for larger 1/300th games. However, I remain unsold as to its benefits over Cold War Commander.

Posted by Counterpane at 3:33 AM

Interesting post Mr C. For comparison, you should now play the game out using CWC and see if you get a similar outcome 👍.

That was the plan Andy but it turns out my son Charlie is coming home tomorrow and will want his bedroom back so I've had to demolish the battlefield!