The recently acquired box of Gripping Beast Picts is done. I now have four units of Pictish warriors and two of skirmishers for use with Lion Rampant. 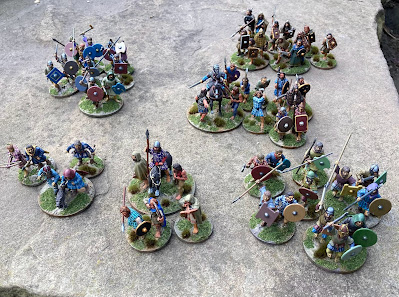 There were 25 models in the box and they can be made up with a mix of axes and spears (oh and one sword). That was fine to give me two units of twelve tribal warriors.
There are also a few crossbows and one spare figure left over. Could I possibly find a way of cobbling together a unit of skirmishers too?
Digging through the piles of leftover bits I found a half-completed figure I'd built out of Greenstuff and spare parts. He was originally going to be a generic Dark Ages archer but the Medieval longbow I'd used just looked too big. I cut off the hand holding the bow and replaced it with a crossbow from the Gripping Beast box. Two down, four to go!
Then I found some unused GB Dark Ages Warriors left over from when Jamie was building his Saga warbands. A couple of white metal short bows and scratchbuilt arrow quivers and I was up to five figures (I left one of the figures with a spear - I don't see the Picts as organising themselves into differentiated units by weapon type).
Finally, a white metal wolf left over from a long-ago Hordes of the Things project enabled me to add a sixth figure to the unit in the form of a hunting dog. 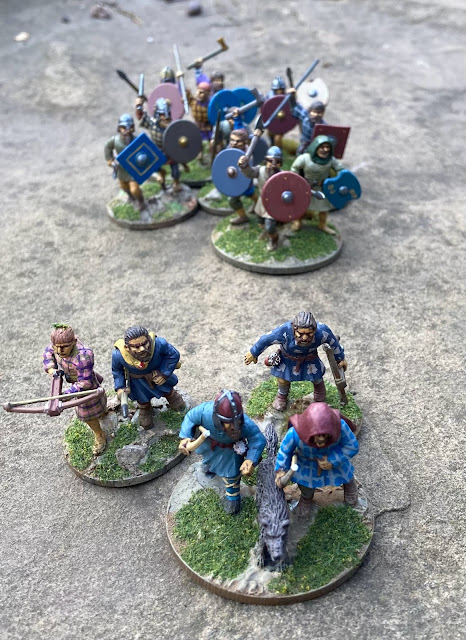 This gets me to a 20 point force for Lion Rampant (I'm using David Sullivan's Crepusculum Imperii variant stats). I might see if I can cobble together a light cavalry unit to complete the picture. 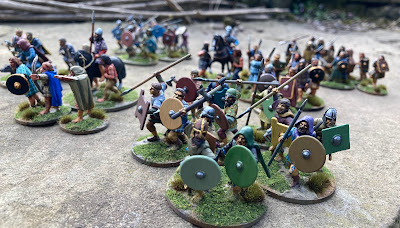 Posted by Counterpane at 2:27 PM

I must admit have been indifferent to GB's plastic kits but you have sold me on this one.

Thanks Codsticker. I find GB's horses to be a bit barrel-shaped and spears on the late Romans are a bit chunky but otherwise OK.