I photographed these WW2 Americans after I'd experimented with a new base texturing mix.  The mix uses Woodland Scenics coarse turf, tea leaves and static grass.  I'm not happy with it and I don't think I'll be pursuing this approach. 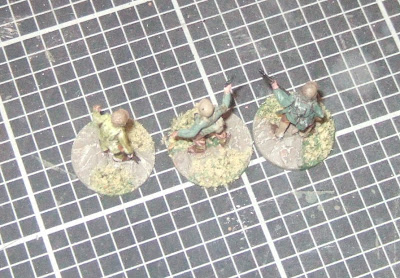 However, looking at the figures did remind me of something I've always meant to check up on.  Am I committing a crime by basing my figures on currently circulating British coinage?
More than once I've heard wargamers insist that either it's illegal to use coins in this way or that's illegal if you glue the figure to the side bearing the Queen's head!  An offence of "defacing the coinage" is quoted (though some of the more traditionalist types speak darkly of treason).
Personally I'm no royalist (I've a lot of sympathy for the American idea of separating Church and State) but it's always pleased me to follow what I see as a wargamers' tradition and glue my figures to the tails side of the coin.  My friend Sebastian, on the other hand, positively revels in his Irish republican roots and actively ensures that his soldiers stand directly on the face of "Smiling Eileen".
Anyway, I decided to do a bit of research*.    It looks like Sebastian and I may be in the clear.
Apparently there was a modern prohibition on defacing the coinage under the Coinage Offences Act, 1936 (penalty, imprisonment not exceeding one year!).  Prior to that the 1861 Coinage Act imposed the same term of imprisonment but with hard labour!  However the 1936 Act was repealed by the Forgery and Counterfeiting Act of 1981.
However, in earlier times defacing the coinage was a serious economic problem.  Coins were "clipped" by unscrupulous people who melted down the trimmings to make new coins thus increasing the money supply and generating inflation.  Medieval laws against this practice many not have been formally repealed.  Maybe I should find a source of 0.02 Euro coins?

* OK, I searched for defacing UK coinage on Google.
Posted by Counterpane at 6:47 AM

I've been gluing figures to the Queen's head for years, and have never been sent to live in a penal colony.