Got Me Some Yanks

I have a few M60s, M113s and assorted other American bits as part of a batch of microtanks I bought last year.  With the Big Game coming up I decided to paint up a small US Army force just in case no one else  brought any.
I didn't have any suitable infantry so I bought a couple of Packs by mail order from Heroics and Ros.  This is pack M11; US Infantry Support Weapons (New Helmets).

So that's a strip of six command figures, three 81mm mortar teams, three tripod MG teams, three TOW teams (to be honest I already have enough of these), six two-man M47 Dragon ATGW teams, three engineers with mine detectors, and three guys with shoulder-launched AAGWs.  Not a bad mix, thought I do tend to end up with lots of leftover mine detector crews.
Detail is OK, not too much flash.  I particularly like the Dragon crews and the kneeling radio operator on the command strip.
The we have M10, US Infantry (New Helmet). 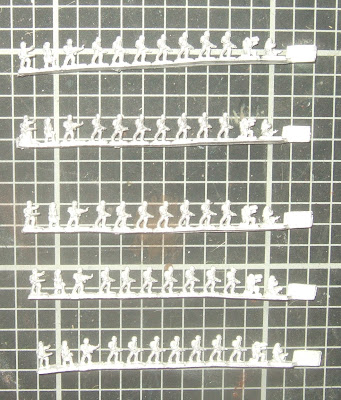 This contains five identical strips each with an NCO (pointing so as to attract attention to himself on the battlefield), and SAW gunner and his ammo carrier, seven grunts with assault rifles, an AT gunner with a MAW and his ammo carrier.  The way I base my models that'll make me a whole company for Cold War Commander with a few left over to decorate command bases.
This is the first time I've ordered on line from H&R and I have to say I'm very impressed.  The process was very straight forward (email order, get back invoice, pay by Paypal) and the goods arrived very promptly.  Excellent customer service from Andy.

With no one carrying 1/300th stuff at conventions any more I'll be buying more stuff from H&R by mail order.
Posted by Counterpane at 2:00 PM