I've recently published the "house rules" adaptations for Cold War Commander that we'll be using for Crisis Point: Arctic Strike in April.  I thought I'd post them here to save some people having to go through the Yahoogroup route. 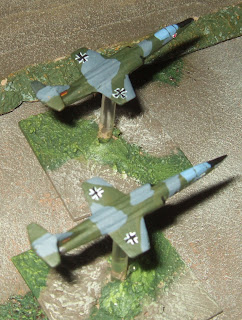 At 0400 hours on 4th August the Warsaw Pact launched attacks, all along the Iron Curtain from northern Norway to Austria.

In the far North the Soviet forces advanced across the Norwegian border and across northern Finland from the Kola Peninsula.  In a few days NATO troops were forced back to the outskirts of Tromsø.

Further south Soviet Baltic Fleet elements and Warsaw Pact ground forces quickly overran Denmark by coup de main, chemical, and conventional attacks.  In a brilliant piece of improvisation, a British battlegroup isolated on Zealand was extracted by sea and transfered to southern Norway - it will later play a part in our action.

Soviet Naval forces steamed from the Northern Fleet bases as soon as the war started and by the time of our game are in position to land amphibious forces at several points along the Norwegian coast.  Meanwhile, NATO naval reinforcements are arriving from the south.

Our battlefield stretches from the Soviet-Norwegian border, just west of the heavily militarised Kola Peninsula, to the town of Bodø
the capital of Nordland County.  There are three main tables and four rear area tables.

Main Table 1: Tromsø - Lyngen Fjord
This table takes in the broken terrain west of the border and the heavily- bombed city of Tromsø
.

"Along the coast, the terrain is primarily tundra interspersed with hills of barren rock covered with moss and lichen.  Further inland, steep rock-strewn hills rise to elevations of up to 1,900 feet above sea level.  Hundreds of streams flow into scores of swamps and lakes which are drained by north-east flowing rivers.  There are numerous ravines and gullies throughout the region.  Vegetation is mostly scrub trees and low bushes.  Few trees in the area are thicker than a man's forearm, or taller than twenty-five feet."
- Burgess, Inside Spetsnaz

Main Table 2: Bjerkvik
This zone covers the shore of Herjangenfjord (which itself is an arm of Ofotfjord) north of Narvik.  In general this area is under NATO control except that Warsaw Pact forces have landed at Bjerkvik and cut the E6 highway to the north.  This table should see a gradually escalating fight as the Warsaw Pact manage to infiltrate more and more forces up Ofotfjorden and NATO forces concentrate to try and throw them back into the sea.

Main Table 3: Bodø and the Road South
This table represents the area between the city of Bodø (with its international airport) and the E6 highway connecting the north of Norway to the rest of the Kingdom.

Aims of the Game

Our aims are several:

Umpires
The umpires are responsible for rules interpretations and for the administration and balancing of the scenario.  The latter job is likely to involve on-the-fly decisions about the releasing of reinforcements to one side or the other as the game progresses.

This year the umpire role is to be taken on by Richard Crawley (NATO) and Richard Phillips (Warsaw Pact) as player-umpires.

Command Teams
All non-umpire-team participants are allocated to either the NATO or the Warsaw Pact command team.  It appears that all participants are keen to take on the role of Brigade Commanders but just in case someone decides to experiment with a different role, here are the possible roles we identified for last year’s game:

Between three and nine Brigade/Regimental commanders per side (i.e. one to three per table).  Each represented by a CO unit on the table and responsible for moving and fighting with the “teeth” units.

A Corps/Army Commander for each side.  Represented by assorted command units on the rear area tables and wearing the fanciest hat available.  These players are tasked with allocating forces between the various sectors and, with the staff officer, allocating heavy artillery and air support to their subordinates.

There’s no reason why players shouldn’t swap between these roles as the game goes on.