Who Won the Wars of the Roses?

It's a question my kids have asked a couple of times this weekend and the correct answer is of course, "Neither York nor Lancaster".  It was appropriate, then, that yesterday's large Basic Impetus game ended with a similar result.  Both sides lost!

I'd planned a four-handed game set in no particular phase of the wars (having units in an odd mix of liveries) with Richard of Gloucester and Richard Neville, earl of Warwick for the Yorkists taking on the duke of Somerset and the earl of Northumberland.  Each player was to handle a command roughly the size of a standard Basic Impetus army.

Unfortunately, one of our expected players had to cancel but we went ahead drawing lots for sides and Andy copped for running a double-sized Yorkist force against Jamie and me as the swinish Lancastrians.

The battlefield was fairly open.  The only significant terrain features were a wood if front of the Yorkist left and a cabbage field in front of the Lancastrian left.

As Somerset I deployed on the Lancastrian right with a battle that was strong in archers and contained the only unit of mounted knights in the game. 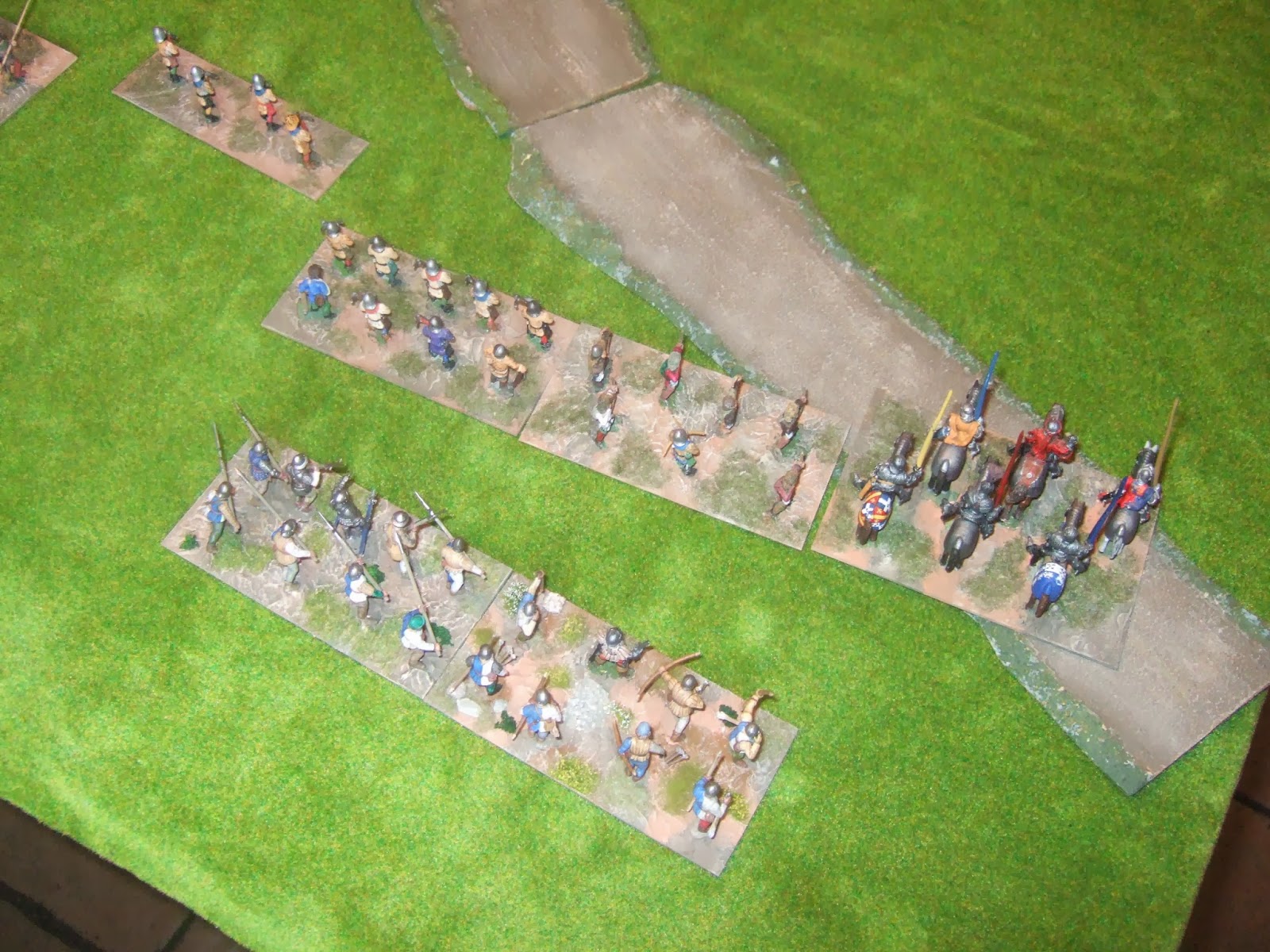 Jamie, as Northumberland, took the Lancastrian left and centre.  He had a few borderers stiffened by a contingent of dismounted men-at-arms, a few retinue bills and bows and an organ gun, which in true medieval fashion never moved and never got into action!

Andy lined up a strong right and centre opposite Jamie and pushed forward some light horse, backed by Richard of Gloucester on foot against me. 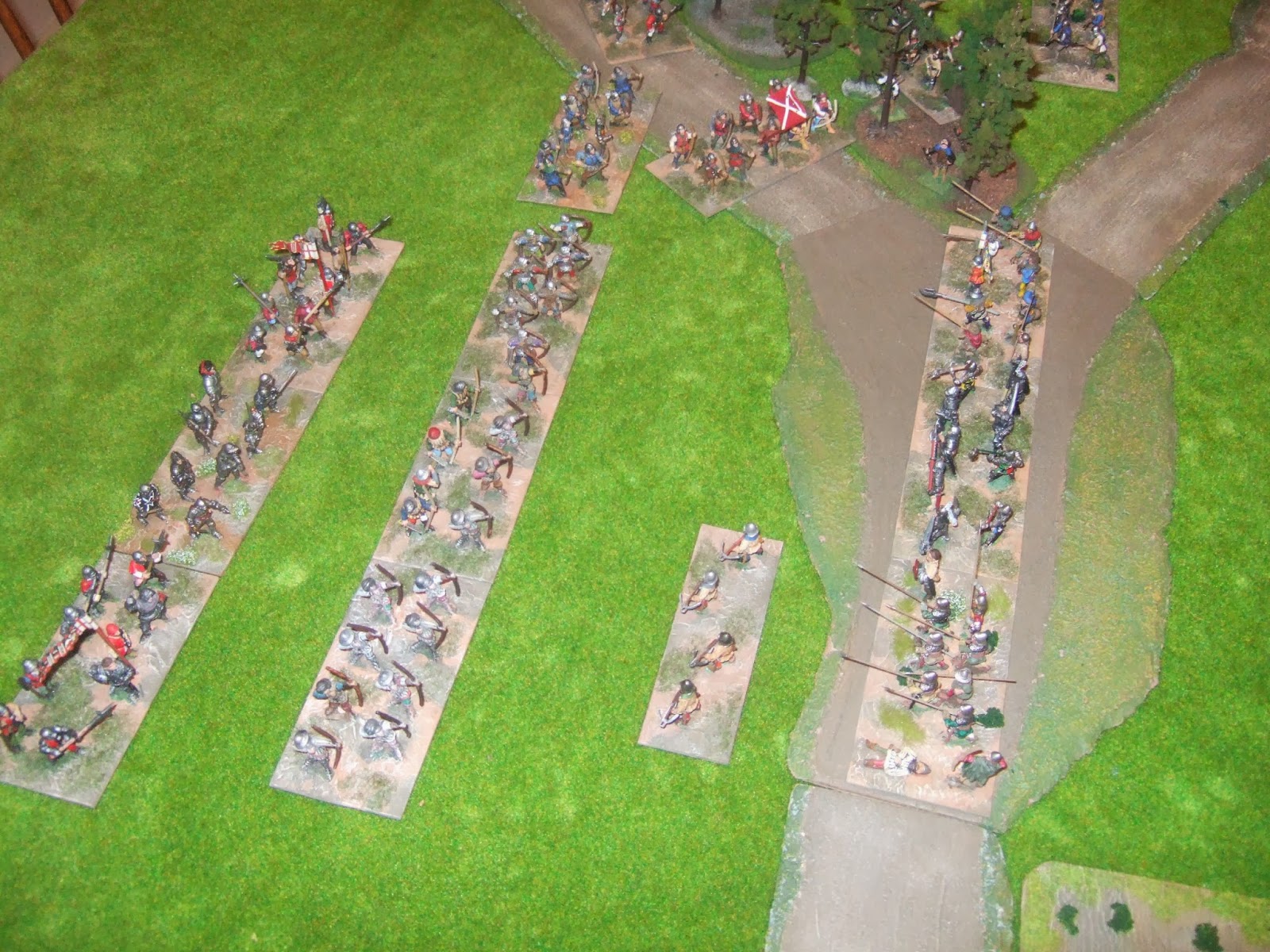 A couple of interesting rules questions came up during the fight around the woods.  Firstly, Andy ended up with a unit of archers astride the road flanked by a unit of my crossbow-armed, French mercenary skirmishers among the trees.  Andy’s troops also had a unit of Borderers to their front.  At whom should they shoot?  The skirmishers (represented here by a few singly based figures) who were closest and just edged into their firing arc or the Borderers who were the closest unit directly in front of Andy’s archers.  We decided on the latter.

The second incident occurred after Andy’s bowmen had driven off the Borderers.  They now found themselves disordered and sitting in the zone of control of the French skirmishers in the woods.

This seemed a bit hard on Andy but we justified it by saying that the archers were busy trying to sort out their formation whilst engaging the skirmishers with a little ineffective shooting.

Anyway, back to the battle.  The mounted Lancastrian knights drove off the Yorkist light horse and hit Richard Crouchback's men-at-arms as they pursued.  After a prolonged and bitter melee Richard and his men were routed and it seemed that Richard would be cut down but a fresh unit of Warwick's billmen intervened and chased off the exhausted Lancastrian knights.

Casualties were mounting on both sides as the Borderers advanced into the teeth of a gale of clothyard arrows and several Yorkist units were routed from the confused fight around the treeline.

At around half past four the crisis was reached.  In a single game turn first the Yorkists and then the Lancastrians reached their breaking point.  We decided that in the confusion, both sides, fearing that the day was lost, had determined to pull their troops out of the battle.

The game was great fun and I'm pleased with how impressive the figures look en masse with the Impetus basing scheme.

Nice work. I've been contemplating a foray into WotR territory especially as the missus likes the period. Any thoughts on how Impetus would work with 15mm?

Impetus works fine with any scale as it uses large element bases.