The traditional start of my wargaming year (each September) is the annual Berkeley Hordes of the Things tournament.   Jamie and I were up about 5am and off down to Gloucestershire by 6:15.  Maybe one year I'll try going down on the Friday afternoon?

To be honest I play very little HOTT these days; we’d played just the one game since last year’s event.  Instead, my main reason for going is social.  The Berkeley lot are a grand bunch of people and for several years now my anticipation has been more focussed on the craic during the day and the opportunity to play other games during the evening.

I can honestly say I enjoyed every game this year, win or lose.  There seemed to be an unusual percentage of extreme die rolling though.  Don't think I've seen so many 6:1s or improbable survivals by hopelessly outclassed elements.

First up I played Andy Unwin who was sitting in for the absent Tony Horobin.  Andy is a skilled HOTT player - I know he's beaten me at least once previously and I don't recall ever returning he favour.  On this occasion he was aided by my rolling a spectacular number of low scoring dice.  My Wolf Pirates were down 12AP in pretty short order.  Andy was using Mark Fry's Fellowship of the Ring army and at least I had the satisfaction of taking out Legolas before the end!


Game two saw me up against Mark Fry himself with the matching pair to the Fellowship, the Moria Goblins (they have a cave troll, and indeed a Balrog). 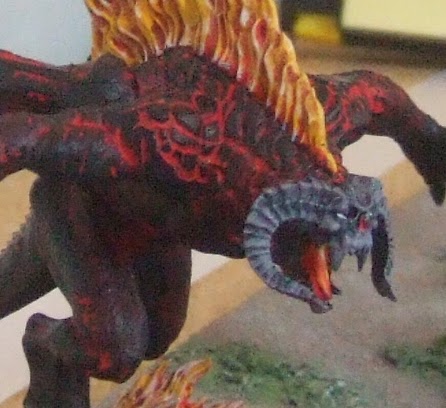 The Balrog (rated as a God) arrived on game turn 2 and immediately destroyed (rolling 6 to my 2) a couple of Wolf Pirate Warbands.  Fortunately, Mark then rolled a 1 and the Balrog got bored and wandered off.

This left Mark with a rather cramped battle line fronted by a large number of Hordes.  With two Heroes and a Paladin backed up by the four remaining Warband, I was pretty sure I had a good chance of battering through the Hordes and taking out the Warband General and Magician sheltering behind them.  Unfortunately I'd failed to take into account the fickleness of the dice Gods.  Two consecutive 6:1s in Mark's favour saw Hordes take out Gunda (Paladin) and Harrek (Hero General) for an overall 12:6 win.  Unbelievable!

With Game 3 my luck changed definitively.  Owen Webber's War Gods of Aegyptus had a four Blades, four Shooters and two Magicians, which I felt was a combination I could probably handle if I didn't lose my Paladin.  I lost my Paladin!  Fortunately, though, Owen's PIPs dried up almost completely and Harrek was able to chase Owen's Blade General almost to the walls of his own Stronghold before hilling him to give me a narrow 10:8 win.  This time it had been Owen's turn to be incredibly unfortunate with the dice.

For game four I was paired with my son and heir.  Jamie was using his 15mm Army of Cornetto (renaissance Italians with Leonardo additions) so I picked out my Asag and the Stone Allies.

I got to attack and decided to use a couple of Beasts in a fast left hook towards Jamie's Stronghold.  I tied down his centre by means of a general advance with my Behemoth and Hordes (as well as another distracting Beast on the right).  Everything went according to plan and Beasts and Aerial Hero were able to take the Stronghold.

So at the end of the first day my usual mid-table obscurity was achieved despite a shaky start.  More later on the Saturday night game of Pulp Alley.

Sunday morning began with a battle between my Sun Dome Templars (Jamie wanted to use the Wolf Pirates) and Jane Williams's Lunars under the command of James Ewins. 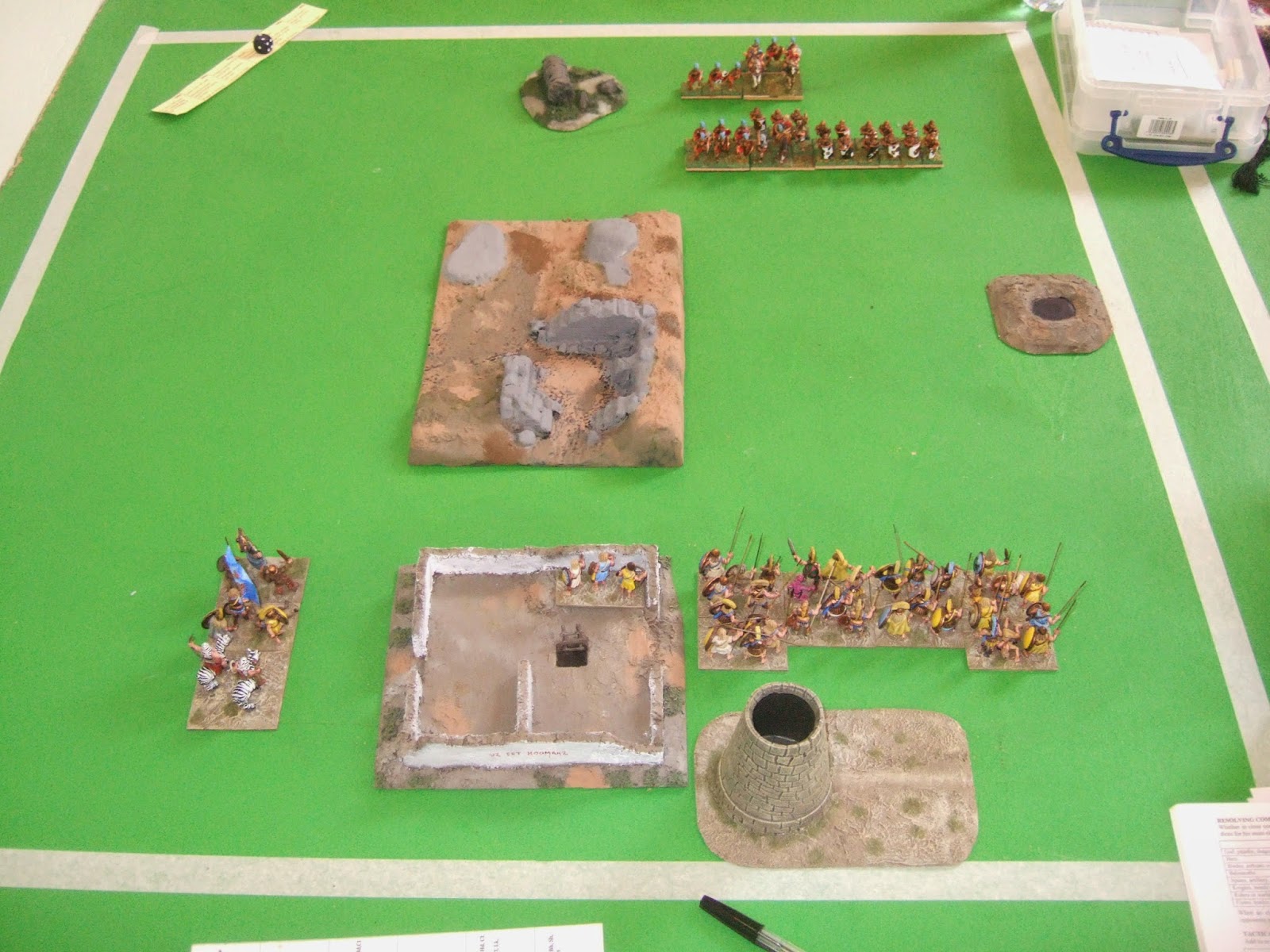 I'd thought it might be interesting to fight across a strip of Bad Going acres the centre of the table but the dice put the BG along the battlefield rather than across.  We therefore ended up with another narrow, cramped field down which I advanced with Spears and Hordes while the Hero, Paladin and Riders tried a left hook flank attack.

The Hero of Garhound was lost in a melee with Lunar Blades but the main clash of Battle lines saw James's Lunar Hero General facing off with Solanthos Ironpike, my SunDomer Spear General.  Fortunately I was able to manoeuvre some Sun Dome militia (a Horde) onto the Lunar General's flank and the subsequent roll of 6:1 (yes another) saw him skewered on Solanthos's eponymous weapon.

Game 6 saw yet more Gloranthan action as the Wolf Pirates took on Jane Williams with he Kallyr Starbrow army.  This was to be the closest and most dramatic battle of the weekend for me.

Jane tried repeatedly (and with some success) to disrupt my advance by attacking the rear of my line with sylphs (Flyers).  Eventually, Harrek lost patience and broke away from the battle line to destroy one of them.  This would prove very significant later.

When the two battle lines finally clashed, Harrek was out of the ideal position away on the left hand end where he ended up matched with Kostajor Wolf-Champion (another Hero).  I had a 6:5 advantage in factors but threw yet another low score and lost my Hero General!  Game over, I thought, but you always continue to the end of the turn and Gunda narrowly beat Kallyr.  We checked the rules and it turns out that Heroes are killed if beaten by Paladins.

This meant that both Generals were lost, and because of the pesky Sylph that Harrek had previously swatted from the air, Jane had lost more points and so I'd won.  Gosh!

After lunch I faced off against young Josh Jones who was using a Vampire army.

Sadly for Josh, he'd put a line of Beasts in front of his main line.  Beasts are killed by any mounted troops in contact and shortly after the picture below was taken, Harrek, Gunda and Argrath dashed through the Wolf Pirate lines and engaged Josh's wolves.  All four Beast elements died in one turn as even the one faced by a Warband that had dashed forward in support managed to throw a 1 to my 6. 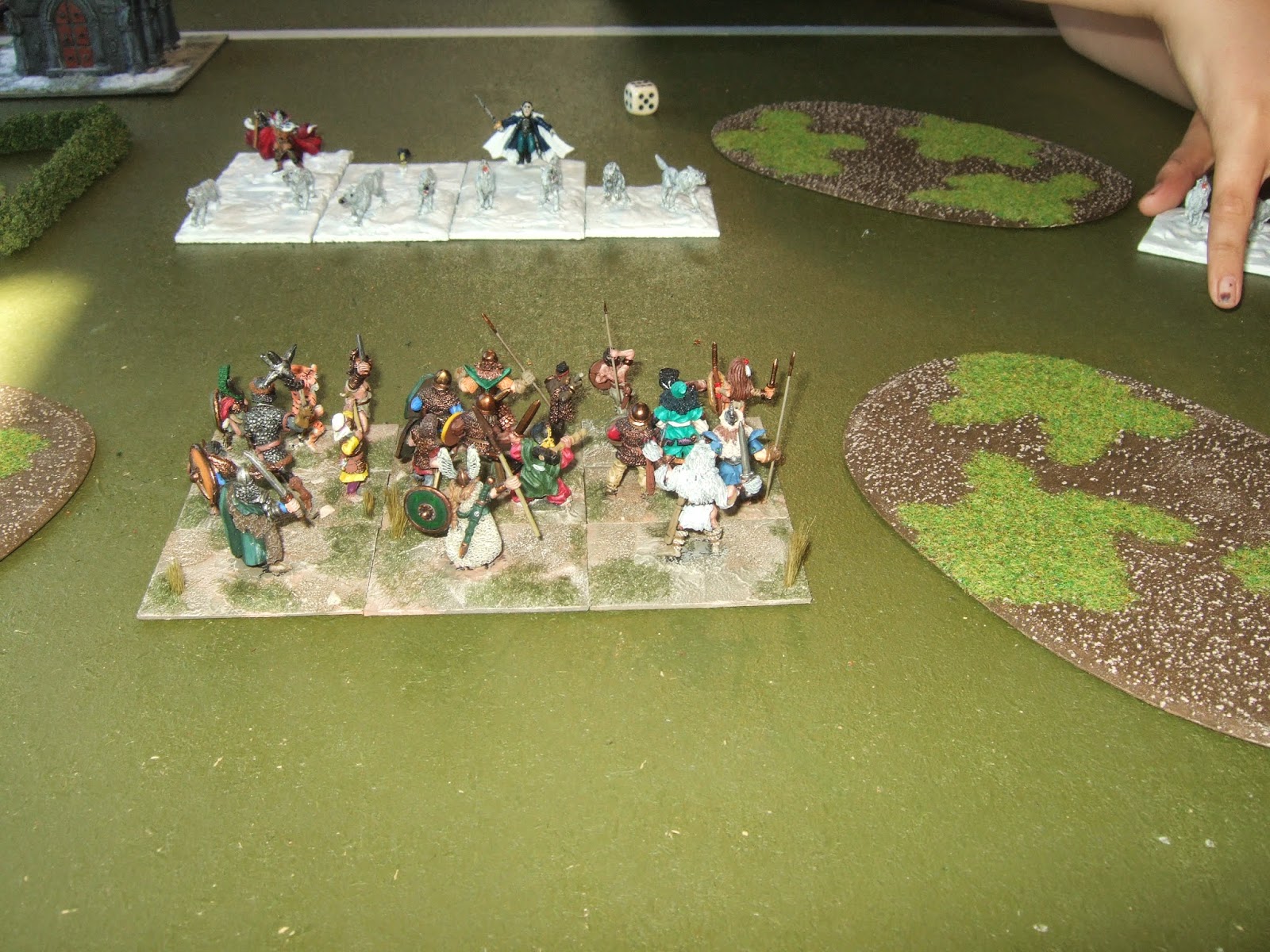 After this, the end was nigh.  Josh's Aerial Hero General was unable to intervene helpfully and when Argrath and Gunda took out his Flyer and Magician the Vampires were down 12AP.

So the last game saw me with an unprecedented (for me) five wins in a row and fighting Steve Price.  Steve had won six games and was likely to win his own tournament for the second year in a row if he won this last game.  Surely I would be roundly scorned if I allowed this to happen? 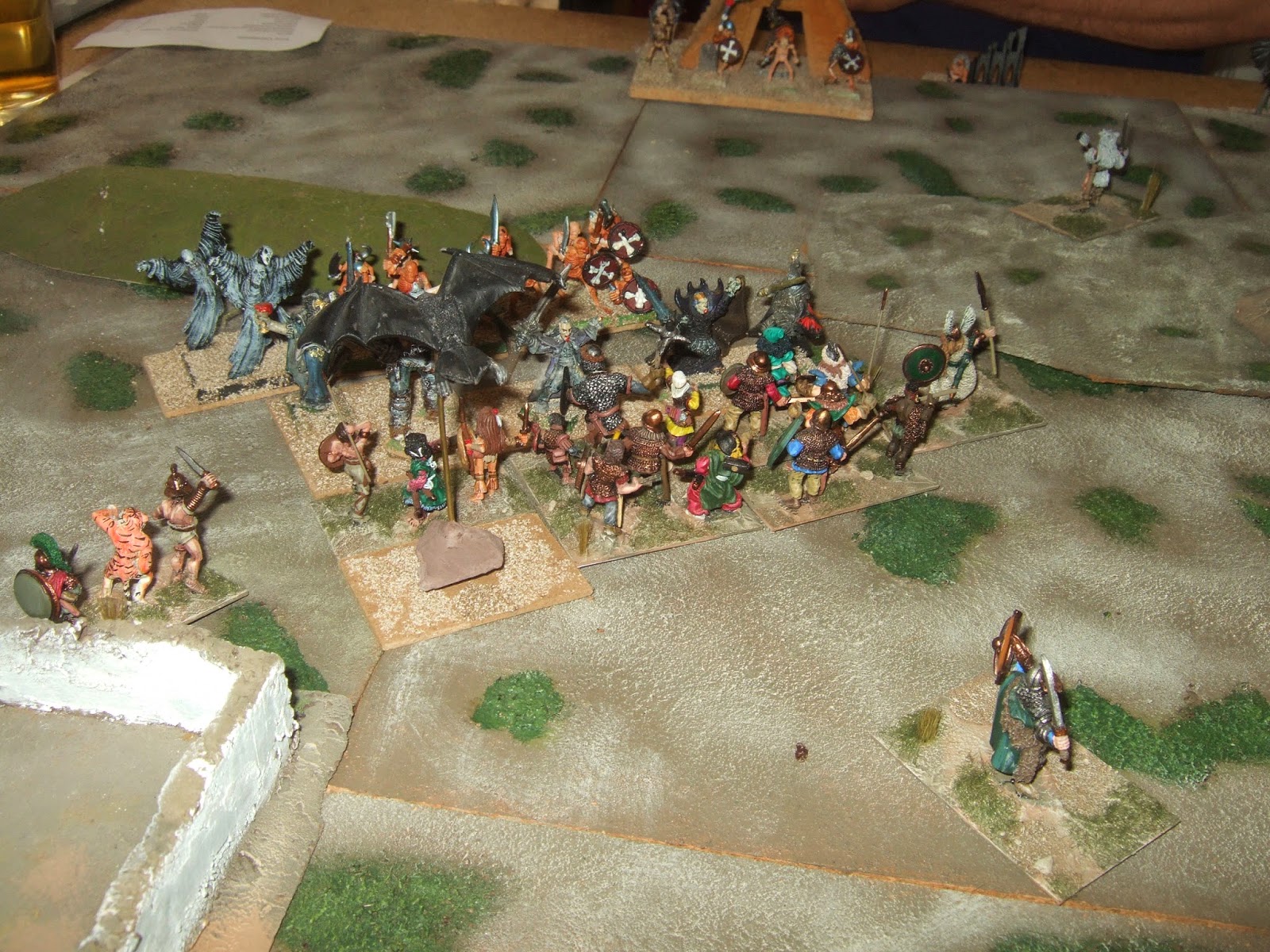 It was Wolf Pirates vs Vampires again but this time, as you can see above, Harrek deserted the main scrum and headed off to the Vampire Count's stronghold.  A turn or so later he managed to capture it and will the battle.

So six wins, my best ever performance and my best ever placing (joint second) at Berkeley.  Equally pleasing, Jamie recovered from four defeats on Saturday to finish joint eighth out of 21 with three wins on Sunday.

As always, the weekend was hugely enjoyable and thanks must go to all involved and to Steve in particular.

Posted by Counterpane at 3:12 AM

Sounds like a great weekend. Well done for your 2nd place and well done to Jamie for an impressive recovery on Sunday by the sound of it.

Cheers, Richard. It was a fun weekend.

Strangely Blogger is showing "No comments" - I'll have to keep an eye on this.

Very nice! I am especially glad to see some more Gloranthan action, even Lunars ;)