The accession of Murad the Vicious as Emir of Yeshilkara in early 1710 spelled danger to the tiny balkan grand duchy of Zheltarus.  Having disposed of his rivals by the usual method (strangulation) Murad set about conquering his weakest neighbour.

A strong Yeshilkaran army under the vizier Harkan Bey crossed the River Sputh and captured a number of border forts.  Realising that his Frontier Corps was badly outnumbered General Ostrovski resolved to fall back towards the capital aiming to rendezvous there with Grand Duke Mikhail.  First, though, he had to cross the River Rem at Slavdansk.

On the morning of 21st April the Zheltarussian forces approached Slavdansk only to discover that Yeshilkaran cavalry scouts had got there first.  Ostrovski would have to fight for the crossing if he were to save his beleaguered army.

This was the general briefing for my latest Saturday Afternoon Wargame TM.  This time we used Black Powder as although I really like Maurice, it's not designed for multi-player use and I need a system for 18th century games that we can play as a social event round the kitchen table at Stately Counterpane Manor.

Having said that, pressure of other engagements reduced our number to two players plus me umpiring.  Jamie (playing his last Saturday Afternoon Wargame TM before going off to university) took charge of the Yeshilkarans (Turks to you) whilst George looked after the Zheltarussians.

The scenario was adapted from Fighting Retreat at El Perez in the Black Powder rule book.  I used the rules as written with the exception that all measurements were converted to centimetres instead of inches.  The battlefield can be seen below with the Rem river and Slavdansk town in the background. 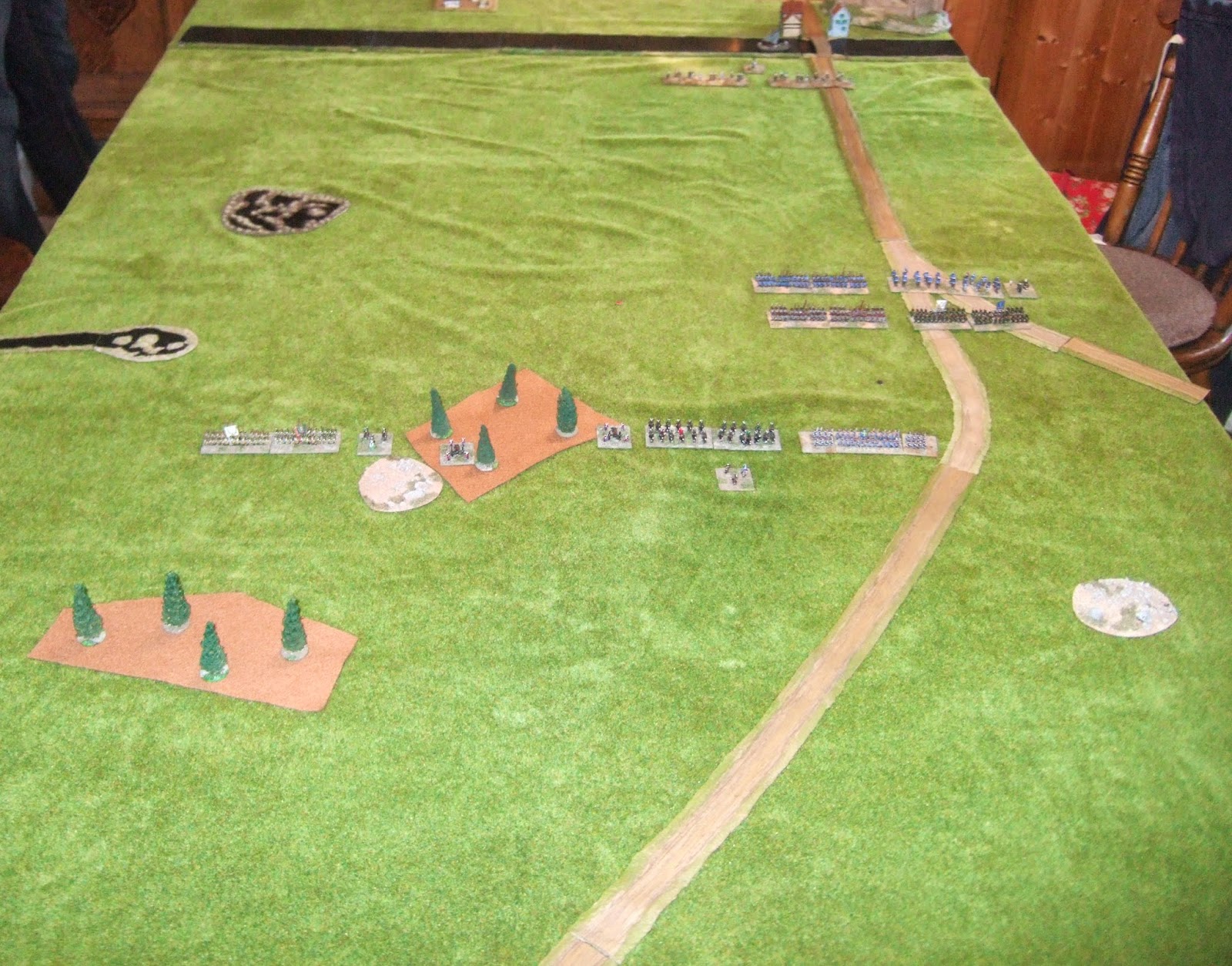 Half of the Zheltarussian force can be seen deployed in a line either side of the central woods to hold off the pursuit whilst the other half faces towards the bridge which is held by two units of light horse plus... The game began with Harkan Bey advancing his cavalry on the left but repeatedly failing to bring on his Janissaries on the right.  In fact a command blunder on game turn 3, when the infantry still hadn't arrived, led to their arrival point moving even further to the right.

On the Zheltarussian left the line was held by a battery of field guns, Viatski's Dragoons and a unit of streltsi militia.  The last of these were to fight with unexpected tenacity throughout the action.

Below we see the massive column of Yeshilkaran horse aimed at the Viatski Dragoons. Meanwhile, George had deployed a large force to engage the cavalry guarding the bridge.  Three units of infantry (including the Semionevski Guards) plus Meierfeldt's Dragoons were allotted the task.
George's advance towards the Bridge looked like being successful and he quickly disposed of one of the two Yeshilkaran light horse units.  When the other, horribly outnumbered, withdrew towards the main force, George put Meierfeldt's Dragoons into column of march and ordered them over the bridge.  Despite fire from the light gun on the boat they reached the centre of the bridge.

Unfortunately, on the next turn, when anything but a 12 would have seen them march off to safety, George rolled two sixes on his command roll!  The resulting Command Blunder saw the dragoons back on the near side of the bridge and marching off in the wrong direction! 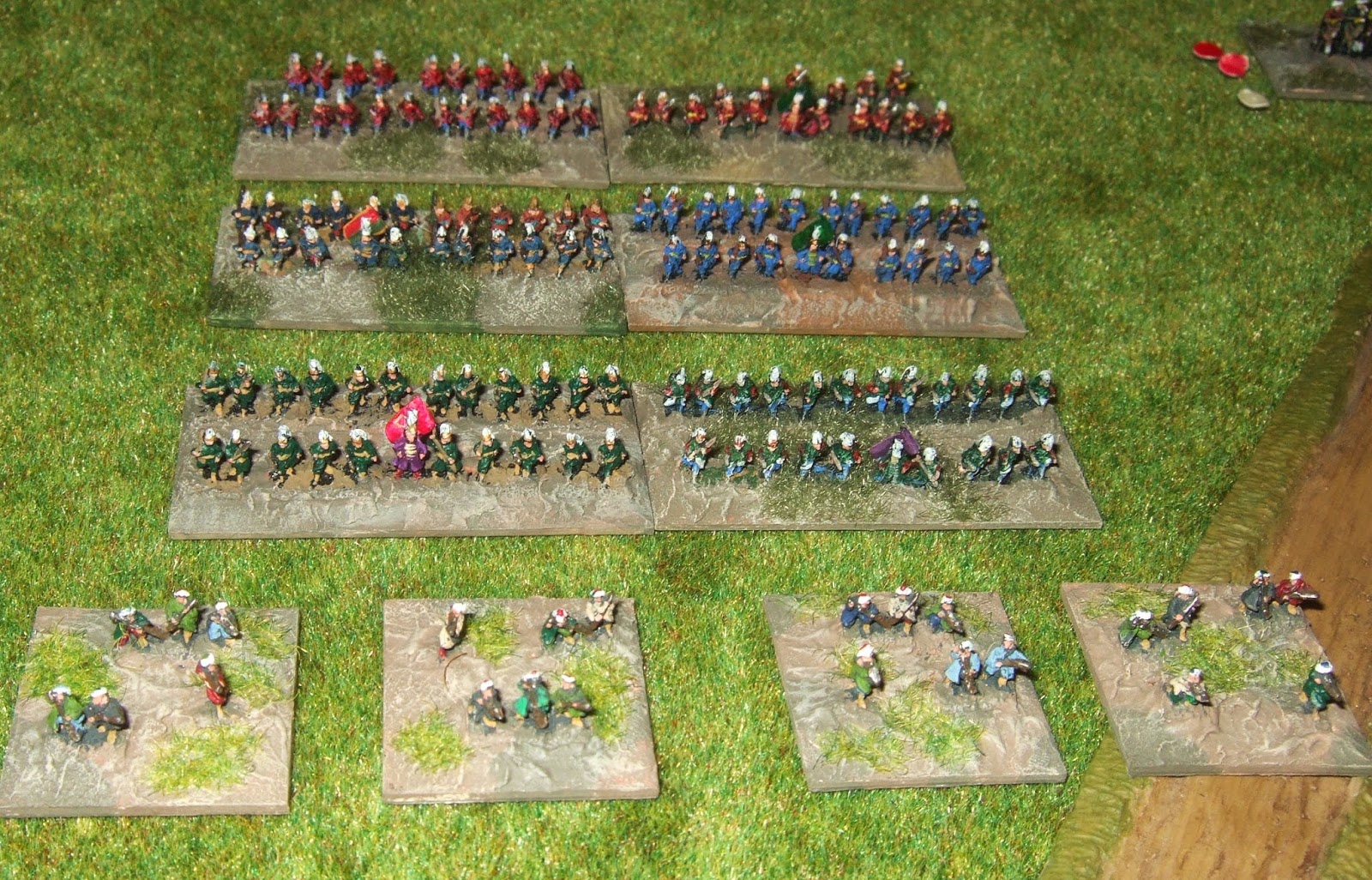 The Zheltarussians were able to march towards the bridge relatively unmolested in part due to the late arrival of Jamie's infantry.  Four failed command rolls including a blunder meant that they didn't really achieve anything much.

In the end, we ran out of time after about nine game turns.  Both sides had routed one enemy unit and the bridge was neither crossed nor properly defended so both sides were happy to call it a draw.

First games are typically slow and this was no exception.  The rules seem to be less prone to unrealistically zippy manoeuvring than I feared on first reading them.  I shall certainly give them another go.  I think we should return to Zheltarus for October's game.