On Saturday morning I popped into Wargames Emporium as Richard Phillips wanted me to pick up some Sepoy figures he had on order.

While I was mooching around I found some bags of assorted figures on the sale table. I figured that it was worth a fiver to take a punt on what might be in there. 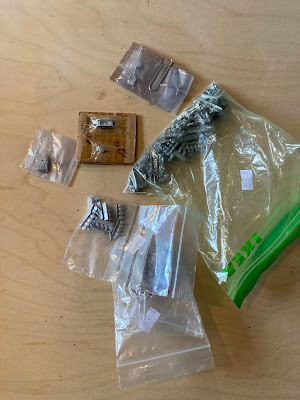 Now we need to bear in mind that this is the north of England so in these parts, if you play your cards right, five pounds is equivalent to nearly two pints of decent ale. So was my purchase worth it?

I have to say that on balance, yes it was.

The green ziplock was, literally, a mixed bag. It contains a lot of bits of micro-armour but, unfortunately for me it's all GHQ and so in 1/285th scale rather than the British standard of 1/300th. However, the three HMMWVs will go straight into my (tiny) 1980s US army. In fact I've already painted them in temperate MERDC for that purpose. 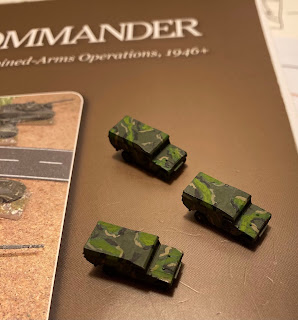 The rest of the micro-armour was a mix of bits from various models.  There are three BT-series tank hulls and three turrets that I think might might make up complete tanks. However, I think these guys will dwarf the 1/300th BT-7s I already have so I'll probably paint them up and see if I can sell them.

Also in the green ziplock were a few 15mm figures (which I'll pass on to Tom Davis) and four 28mm figures.  First of these is a figure that's obviously meant to be John Maclaine somewhere in the Nakatomi Plaza... 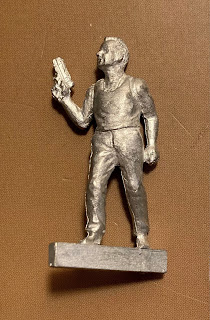 ... though I have to say a close look at his face suggests he'd more readily pass for 1980s heart-throb Dave Gahan from Depeche Mode.

Also in the bag were these three: 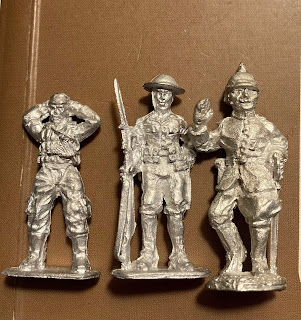 They aren't immediately suggesting a use to me but we'll see....

The other two bags contained Baccus 6mm figures. In the poor light of the shop I couldn't tell what they were but I figured it was worth a shot.

In the end I think I've got a whole Republican Roman army and a couple of bases worth of Greek hoplites!

By a strange coincidence this is the second time (in well over a decade) that I've bought a load of assorted second-hand 6mm stuff from Wargames Emporium and the second time it's turned out to include a complete Republican Roman army! Last time they were Irregular Miniatures. This time's Baccus minis are sufficient, I think, to build up an army for To The Strongest! If I do that, though, I'll have to sell them on as I already have such an army for those rules in 28mm scale.

Oh and I'd forgotten; there's also a few French (I think) Napoleonic infantry and cavalry in 6mm scale.

Posted by Counterpane at 2:20 PM

What you did is somewhat the same as what I do, except that I am often able to look at what I buy (but I also pick up bags of miscellaneous figures, with the same hits and misses you experienced.) I'm pretty inclusive about the figures--25mm, 28mm, etc.; painted well, badly/not at all, even mildly broken. They enter the ranks of what I call my "Bits Box Armies". There are rarely more than just a few of any one type, so small units are about all I can put together, which fortunately are useable with DBA and similar rules systems.I fix what I can, usually strip them all down to bare metal and paint and rebase them them to match each other as much as possible. (I don't worry too much about things like helmets or weapons being exactly the same; at least for Ancients and Medievals, as I doubt whether armies during those times were anywhere as neat and tidy as we tend to put on our tables.)

I don't devote all of my time to this sort of thing, of course, but it gives me an interesting break from larger projects, and it helps me explore periods I might otherwise ignore. For example, I am not deeply interested in the pre-gunpowder era, but I'm now able to field DBA-ish Imperial Roman, Classical Greek, Palmyran, and Celt "armies", that work just fine! So be ready, bits boxes and odds and ends of the world--I'm comin' for you! (Assuming you're in the U.S. .....)

Actually, after sitting down and studying the Romans with the TTS army lists in front of me I'm not quite able to put together a whole Polybian army.

I suppose I could:

1. Paint them up and sell them on in unbased form,

2. Paint them up and base them on 40mm wide bases to form human opponents for my long-unused HOTT goblin army, or

3. Put them in a drawer somewhere and save them until further inspiration strikes.

At the moment option 2 is most appealing.