The scenario I'm planning on playing next gives the Germans the chance of air support in the form of an Arado Ar-234 Blitz - the world's first jet bomber. As it was raining this morning I decided to stay in and have a go at scratch-building one in 1/300th scale.

I cut and shaped the fuselage from a piece of MDF left over from a building kit. The wings and tailplane are shaped from plasticard.

I then carved the engines from lengths of a thicker-than-usual bamboo skewer. 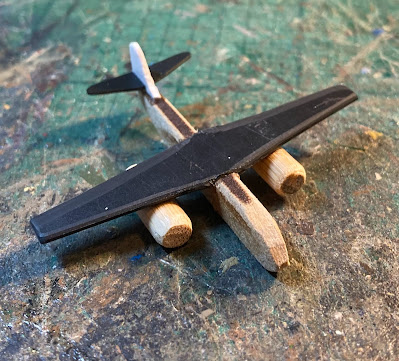 I discovered that the best way to stick together the various materials was to mix adhesives. Where the bamboo is to be stuck to plasticard, I first sealed the surface of the bamboo with clear adhesive and left it to dry a little. I then slightly softened the plasticard by painting on liquid polystyrene cement before joining the two parts with superglue.

I cut away a chunk of the lower fuselage to make a slot into which I could glue a rare earth magnet so the finished aircraft can use one of my flying stands. 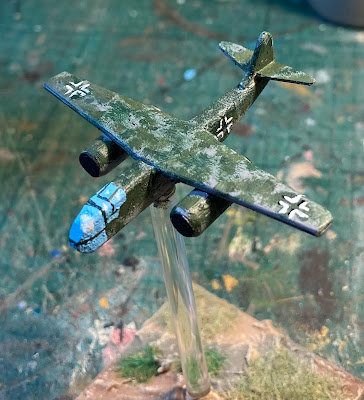 I painted the aircraft in Medium Sea Grey before stippling on Black Green and Reflective Green (all Vallejo) and then hand-painting the detail.

It's far from a perfect model - the fuselage is too narrow and too boxy in cross-section but I'm only ever likely to need an Ar-234 in this one game so I can live with it.

Very nice!
With a local scarcity of balsa, I’ve been getting wood pieces from “craft sticks” aka popsicle sticks and wooden doweling.

Cheers Doug! I haven't bought balsa in decades so I've no idea if there's a shortage where I am.

I do however have a couple of containers of various sizes into which I put any lengths of spare MDF, skewers, wires or interesting strips of plastic that look like they might come in useful one day.

It may not be perfect, but it looks damn good. Nice work!

That's a great piece of work for a weekend project!