I managed to get down to Wargames Emporium on Saturday morning with the aim of picking up some more bits of "set dressing" for Riga.

There wasn't a lot that caught my eye from a terrain point of view but I did get some barrels from Renedra. 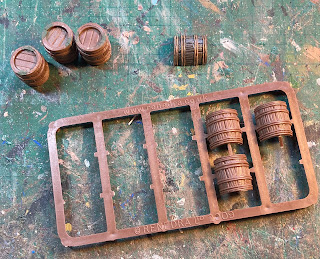 I do have some other barrels among my collection of rural clutter but these are interesting in that they appear to be older-style barrels held together with withies rather than metal bands. I've converted one into a floating barrel that may end up in one of the previous post's gullies.

The big win of the trip, though, was a Victrix command sprue. It came from their Bavarian infantry pack and because the officer's horse model was broken at the ankles, it was priced at just £2. 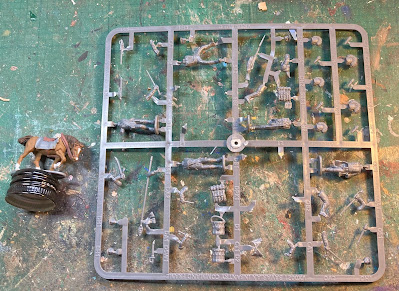 As you can see the horse has gone together nicely with the aid of a little Tamiya Extra Thin cement.
There were some Bavarian troops among the units in Macdonald's X Corps and although I don't intend to build any Bavarian units as such, the occasional officer here and there may come in useful. I'm thinking, "Rescue the officer who's been observing the enemy lines and is now cut off in the church tower" and suchlike.
The sprue makes two officers (one mounted and one afoot), a standard bearer, an NCO, and a drummer. Even if I don't use the Standard bearer and the drummer, three Leaders for two quid has got to be good value!
Finally I also bought a second box of Perry ACW cavalry. This will give me a second Group for my Confederates and, somewhat frustratingly, leave me one model short of a third Group (because I needed to use one figure from the first box as a Leader).

Posted by Counterpane at 1:30 AM