Back in October of last year I spent a fiver at Wargames Emporium on a couple of bags of various second-hand bits.  I figured it would be fun to see what was in there and whether I could make anything useful from it.

For starters there's this lot:

And in front a three-part wooden palisade.

In addition, the bags also contained some 1/300th scale aircraft. So far I've painted these:

All in all, not bad for a bag of junk with more still to come.

In addition, I've also been sifting through my other piles of leftover 6mm stuff. I bought a second-hand Cold War Swedish army years ago at the Gauntlet show in North Wales. There were rather more models than I needed to put together an Armoured Brigade for Cold War Commander. The spare models sat, unused, in a drawer for years until I decided to have a go at a small force in winter camo: 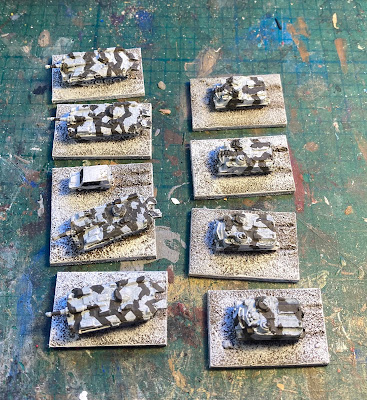 I may never use them but at least they're painted!

Finally I also painted a civilian vessel that's been in the bits drawer for years. Is it from a Monopoly set? I'm not sure. Either way it'll be going to the first CWC game at The Unit in a few weeks.

Posted by Counterpane at 9:57 AM

That's not a bad return for a £5 outlay!

Thanks for commenting Elenderil! I certainly agree!