Somewhere Down the Crazy River

Richard and Ron came over today and we played a first game of Sharp Practice with my new 28mm American Civil War collection.

The introduction to the scenario was as follows:

It is May 1863 and for nearly 12 months the Union has been unable to establish complete control over the Mississippi River. While the Confederates continue to hold the fortified heights at Vicksburg, the Union plan to cut the Confederacy in half remains incomplete.

Despite patrolling by Union gunships, vital supplies from the West continue to cross the mighty river. However, difficulties in coordinating cross-river and overland traffic mean that supplies often wait in riverside warehouses and barns while onward transport is arranged. These temporary stashes of supplies represent targets of opportunity for the Mississippi Marine Brigade.

Ron (in the guise of Sergeant Wartner) ran the Confederates, starting with just two line infantry units guarding the supplies in the barn. Richard (as Captain D R Rosebush) commanded the Marines; two groups of line infantry, two of skirmishers, and an artillery piece. One of the skirmisher groups was of dismounted cavalry armed with breech-loading carbines.
Richard's deployment was delayed by the need to get his artillery piece onto the top of the steep-sided levee. I informed him that this required him to keep one Group of non-artillery troops off the table until they had used up an activation helping the artillery into position. Given the random nature of Sharp Practice game turns, it was well into the third turn before the Union troops had completed their deployment.
Ron, meanwhile, was hoping for the return of some Confederate cavalry who had recently passed through the area and who would hopefully ride to the sound of the guns. In the end that would take a damned long time!
The dismounted Union cavalry were deployed on the left and moved into a patch of woodland. Their breech-loading carbines would prove powerful but not game-breakingly so. 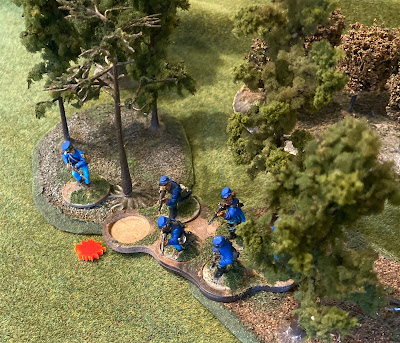 They came under fire from Wartner's infantry around the barn. 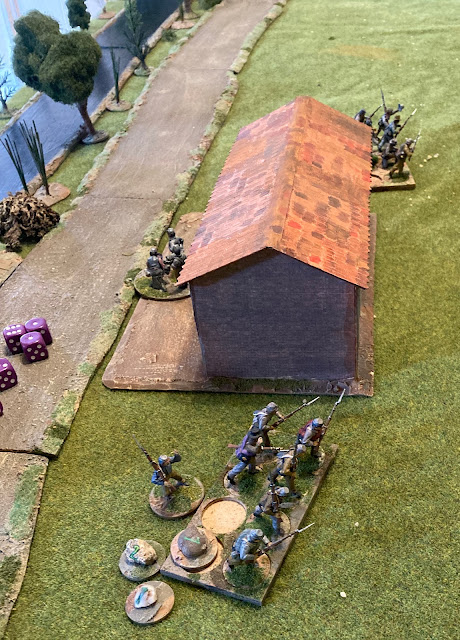 Eventually Rosebush managed to get his main force deployed, artillery on the levee, infantry advancing to their right. 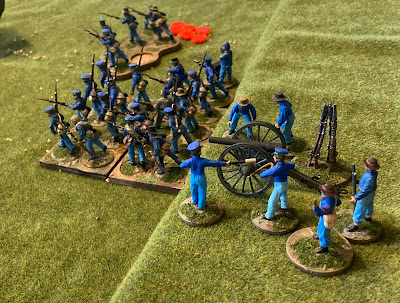 The Marine Brigade infantry shook themselves out into a line and started exchanging shots with their Confederate opponents. Shock and casualties started to build up on both sides. 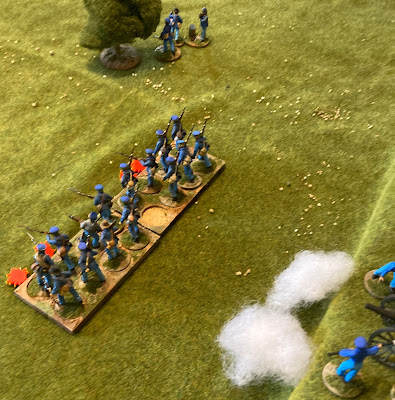 Ron, in this early stage of the action, was desperately short of men, having only two groups of eight infantry, each led by a non-commissioned officer. 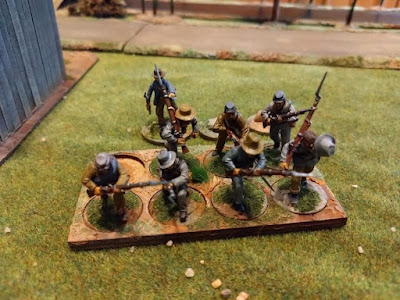 The cavalry who had passed by earlier in the day would return at an unpredictable time (though at least Ron knew which road they would arrive on - we'd diced for it at the start). The rule I used was as follows:
This worked really well. One of Ron's units had been forced to flee and the other was hanging on by its fingernails when the cavalry arrived. 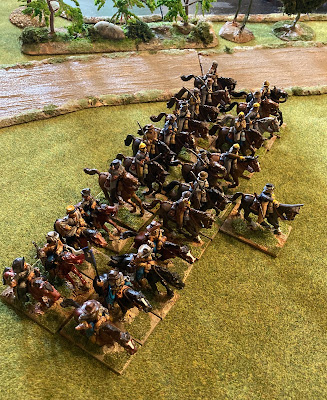 The Confederate cavalry, led by Louisiana-born Captain Pierre Napoleon Cassoulet, were 24-strong and made for a stirring sight as they galloped across the open ground towards the Union line.
I'd been keen to try out massed cavalry in Sharp Practice 2. Penny packets are often not worth having as they tend to get shot to pieces whilst unable to properly manoeuvre among the often dense terrain.
This time the charge was effective. Ron rolling three sixes for the distance covered by his galloping cavalry helped! 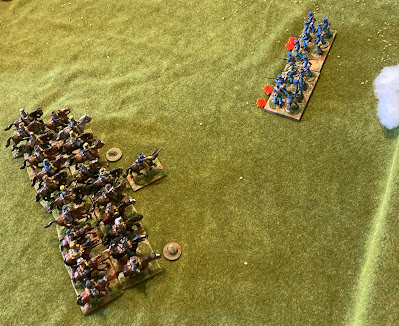 Despite losing men and picking up Shock as they advanced, the cavalry crashed into the marines' line and sent the survivors fleeing back up the steep flanks of the levee.
However, Richard had, by this time, sent his skirmishers forward on the right. They reached the barn. By now it was blazing as a result of a random event and shortly the first of three Chapter End events would see the roof collapse destroying the supplies within! 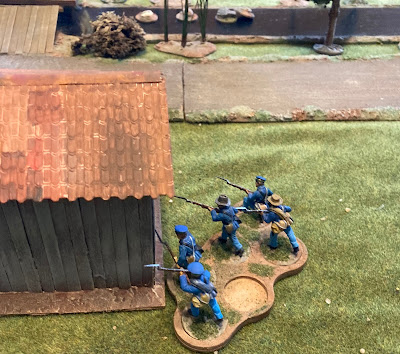 Repeatedly forced back by the intensity of the Union fire, Ron's Force Morale was plummeting. As his cavalry milled about at the base of the levee... 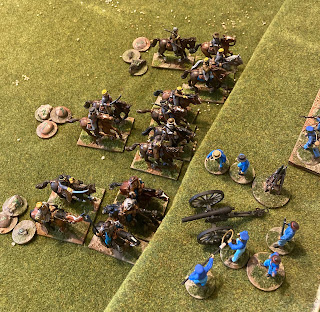 ... his remaining infantry were closely engaged by Richard's skirmishers. 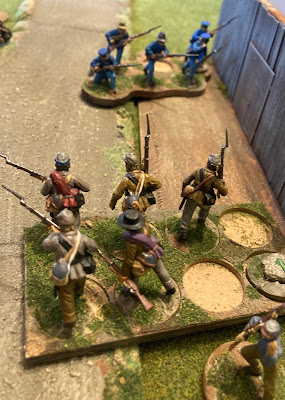 By the end, the Confederates were down to one point of Force Morale while the Union still had seven. With virtually no command chits left in the bag, Ron decided to quit the field and a Union victory was declared.
I'm really pleased with this first foray into ACW Sharp Practice. The game was nicely balanced and we weren't sure which way it would go for a long time. I think a narrative campaign portraying the adventures of the Mississippi Marine Brigade could be great fun.
Posted by Counterpane at 3:10 AM

Great little scenario. Thoroughly enjoyed getting back into Sharp Practice after quite a while. Fantastic job on the Mississippi Marine Brigade conversions they look superb. Looking forward to some more ACW plus our Napoleonic Livonia campaign.

Cheers Richard. SP2 is such a reliable game - always tells a good story. Unlike SP1, which could almost be guaranteed to cock one up!

Huzzah for the Mississippi Marine Brigade! Great to see them in action, lovely work on the figures.