Day two at Triples I forgot to take my camera so no pics I’m afraid.  Shame because I really wanted to get some shots of Dr Mike’s fabulous 6mm units.  As it was I was able to quiz the good doctor on his basing technique and I’ll be trying some of his ideas for sure.  What I must resist is the temptation to adopt some of his enormous basing - though masses of 6mm figures on full-size Impetus bases do look impressive.

The absent Polish Generals issue is resolved.  Pete Berry is going to post me some English Civil War command strips to replace the missing men.

I had a brief chat about pikes with the guys from the Ilkley club over their lovely 28mm Cerignola, 1503 game. As well as giving me guidance on their preferred method of making pikes (0.047” piano wire), they also made me aware of the laser-cut building parts from Warbases.  I went round to their stall immediately and bought a 28mm wrought iron gate way and a balcony kit.  They also sold me a "show special" bag of bricks for a quid.  The gateway may see action next time I run Ninjas At The Vicarage or it might end up in downtown Tcherbevan. 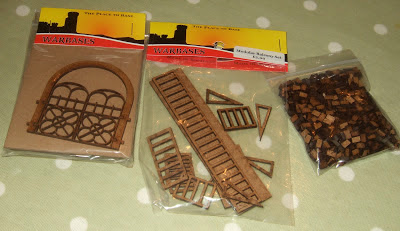 I also popped into the indoor running track area and spent a few minutes watching the end of one of the Impetus competition games.  The visual effect wasn't great (I understand there'd been a cock-up with some of the arrangements) but it seemed that the competition was being played in a very friendly fashion and it was interesting to try and pick up on some of the differences between Basic Impetus and the full game.

Finally I got to speak to some of the people I missed on Saturday (Hi, Pete!) and probably recruited a participant or two for net year's Crisis Point game.