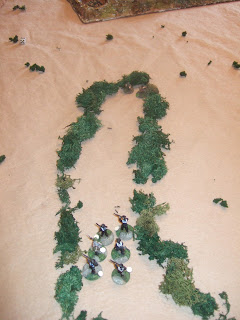 Today's Saturday Afternoon Wargame was the first Arc of Fire skirmish we've played for quite some time.  Andy and Carl came over and I dusted off an old scenario I'd originally played solo about ten years ago.

Operation sea was a landing by Soviet amphibious forces on the northeastern coast of the Black Sea.  If the Soviet Naval Infantry could meet up with Soviet land forces attacking in a southwesterly direction from the area of Krasnodar they would cut off the whole of Army Group South in the Caucasus.

Our scenario involves a platoon of Soviet naval infantry, supported by a lend-lease M3 Stuart, attempting to capture a Romanian artillery position.

Andy, commanding the Soviets, faced interesting tactical choices.  He could move slowly up the ravine on his left (outline by lichen in the picture below) staying out of sight but risking being ambushed or he could stick to the better going on the right but have to clear at least one small wooded area.

He chose a bit of both with one squad moving up the gully whilst the remainder made a right hook.

On the Romanian right the two man observer team was deployed at the end of the gully and, having succeeded in calling down off-table artillery on the Soviets' first squad, then turned their weapons (a pistol and a bolt-action rifle) on the Russians moving up the gully.

By a freak of dice rolling they managed to kill the Russian squad leader.  The naval infantry failed the resulting morale check and pulled back down he gully. 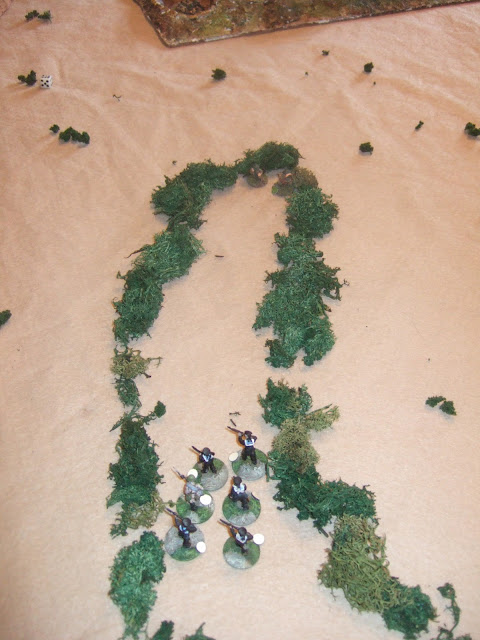 At about five o'clock we ended up with the left flank Soviets stuck in Confused Mode in the gully, the squad on their right routed after a badly failed morale check, the anti-tank rifle team wiped out, the tank knocked-out and the remaining troops unlikely to force a result.  As such we called it a clear win to Carl and his Romanians.